How to tear Minsk-2?

March 22 2016
55
Strictly speaking, the Minsk Agreements are no longer in force, they ended on January 1 and 2016, and today they are based on the verbal agreements of the Norman Four, reached in Paris. They will be ripped off. But how will they be torn off? Who will be the first to say: “Minsk is frustrated”? 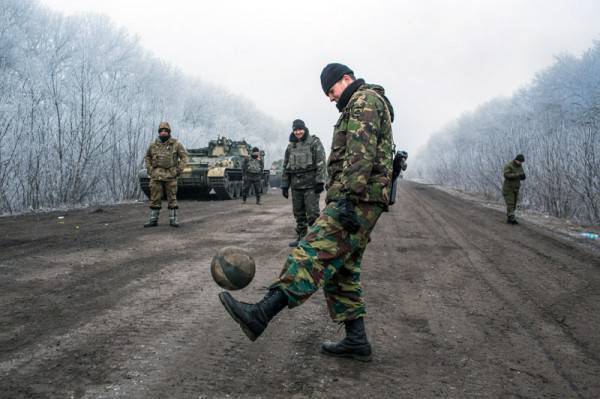 There are fundamental reasons that make the implementation of “Minsk” impossible for Bandera’s Kiev, and the point is not even the need for a complete and anti-Bandera “reformatting of the country”. Donetsk and Lugansk witnessed the war crimes of the Nazi battalions and the Armed Forces of Ukraine, they are a living reproach to the Bandera criminals, and undesirable witnesses.

Therefore, a truce for Bandera is just a way of preparing for the “restoration of control” over the Donbas, that is, for new repressions against the “unseen Ukrainians” according to the Croatian scenario, which is not hidden by the “pro-Ukrainian” political scientists. In the “liberated areas” of Donbass, the population is “filtered” according to the “Svidomo” principle, that is, they are building a new concentration camp “Talerhof” ...

Freezing the situation in the Donbass is a temporary solution, and its time is running out. The recognition of Novorossiysk republics by Moscow is frozen. But Moscow will have to recognize the republic when it becomes impossible to maintain a truce with firefights in the Donbas. After the local elections, of course. Of stories it is known that Moscow takes a long time to get together, but drives fast, and the last example of the Russian videoconferencing system of Russia in Syria showed it ...

Bandera has already begun to tear down the Minsk agreements practically, seizing neutral territories, and resuming intense shelling. OSCE spokesman Alexander Hug recognized the provocative advancement of the Armed Forces of Ukraine in the “gray zone” to the line of contact - this is something new for the OSCE. The representative of the Ministry of Foreign Affairs of Russia, Grigory Karasin, made an unequivocal statement that "Kiev is preparing a force scenario in the Donbas."

In this context, the attacks on the Russian embassy in Kiev are hardly the only manifestations of the new Makhnovshchina, this is pressure on Moscow to withdraw its diplomats due to the threat to their lives. The hysteria of the Nazi-militants in connection with the trial of the “brother” from the Nazi “Aidar” Savchenko is, rather, only a pretext. We note that Kremlin political analyst Sergei Markin urged to take advantage of this occasion and withdraw the Russian embassy from Kiev, and immediately to Donetsk. The embassy from Ukraine was not taken out, but the trains to Ukraine were canceled ...

In general, Moscow already has enough reasons to declare: Kiev broke the Minsk agreements, the OSCE mission behaved biased and failed. However, it would be too easy, too obvious a move after the “Syrian Gambit”. What will Moscow do in this situation? There are many options, but there is little insider information even from the Western Stratfors.

With the Syrian operation, Moscow, as it were, closed the lid of the Bandera cauldron with a Nazi brew, moreover, with Obama’s hands, when he said after the “Syrian gambit” of Russia that the United States “did not have key interests in Ukraine”. In fact, Obama gave Russia the go-ahead to resolve the Ukrainian crisis, and the Western Strathfor are already predicting the Russian Air Force’s operation against Bandera, especially since the truce in Syria allowed Russia to partially withdraw its military “Syrian” Aviation to permanent locations near Ukraine.

However, Russia may again not appear on the war, as in the 2014 year, and an independent counteroffensive by the Armed Forces of New Russia is impossible, no matter how raging the Nazi battalions are. The VSN can wage war with the Bandera Nazi Legion only with the support of the Russian Aerospace Forces.

Moscow does not make sense to hurry to tear off the lid from the Bandera boiler. Moreover, all political opportunities have not yet been exhausted, for example, Moscow may impose sanctions against the Bandera regime for the disruption of Minsk and the genocide of the Russian-speaking population in the Donbas. Let them be more symbolic, the political aspect is important here. The boiler may in fact explode due to the high pressure of accumulated gases ...

In these difficult conditions for themselves, the Bandera regime invented, probably, at the suggestion of the American ambassador Jeffrey Payette, a new way is guaranteed to thwart the Minsk agreements and at the same time avoid responsibility, simply declaring war on Russia. Tymoshenko and Lyashko, on behalf of their factions, submitted to the parliament a bill to sever diplomatic relations and declare war on Russia.

It is difficult to say how this “declaration of war of Russia” will end, because it is the competence of the Russian General Staff, but the former Prime Minister Mykola Azarov expressed great concern in this connection: “This is very serious!” This means that the bill declaring “war of Russia” may be accepted by the Rada. Then “Minsk” will definitely be torn down. Military provocations of Kiev are possible not only in the Donbass, but also on the border with Russia, in order to demonstrate a “war”.

What does Kiev count on? It is possible, simply to support the degree of anti-Russian hysteria, because he long ago declared Russia an “aggressor”. Kiev is in the thrall of its own propaganda, "that the war is already underway, and nothing terrible is happening in Kiev or Lviv." But Azarov believes that, as a result of the declaration of war on Russia, "Ukraine may disappear from the political map of the world."

22 March US Secretary of State John Kerry was supposed to arrive in Moscow, right on 4 of the day! As if on vacation, or take a pause in the Ukrainian crisis? The Russian Foreign Ministry reduced this visit by two days, transferred it to 23-24 in March. This is a slight slap in the State Department, and some kind of game, maybe Russia, is starting some kind of “Ukrainian gambit”? ...

In general, the summer of 2016 promises to be hot, the Ukrainian oligarchs Taruta and Firtash made statements before the New Year that Kiev had state resources left for 6-8 months, that is, they would end in the coming summer.