March 21 2016
18
Today, the modern market for tactical high-precision rifles is literally overflowing with various offers from a huge number of manufacturers. For this reason, it is quite difficult to find a niche in it. To do this, it is necessary to offer consumers something unusual and new. This is exactly what the young company from Austria Ritter & Stark tried to do, which presented its novelty at the IWA & OutdoorClassics 2016 exhibition - the modular tactical rifle MTR SX-1.

IWA & OutdoorClassics 2016 took place in Nuremberg for the 43rd time. This industry trade fair for hunting and sports weapons, as well as accessories and equipment for recreation is rightly considered the exhibition number 1 in its industry. This year the exhibition was held in Germany from 4 to 7 March. In 2015, 41 748 specialists from 121 countries of the world visited this exhibition. The world market for hunting weapons is estimated by experts at 4 billion euros per year, and for all types of hunting weapons cartridges - at 1 billion euros, hence the interest in the IWA exhibition in all corners of the world.

Modular tactical rifle MTR SX-1 comes from the Austrian town of Ferlach, which is located in the foothills of the Alps. This city is widely known today in the world, thanks to its 500-year-old arms traditions and its own weapons school, graduates of which usually specialize in the production of weapons for individual orders or piece hunting rifles. In the course of training at the local school of gunsmiths, each of the students must make their own smooth-bore gun with hinged barrels over 4 years. Thus, from generation to generation, the accumulated experience and secrets of weapon skills are transmitted.

But Ferlach-based Ritter & Stark is an exception to the rule. The ambitious management of the young company relies on a team of Russian arms designers. A group of engineers from Moscow was invited to Austria especially for this. They recently left the student bench, but have already managed to prove themselves in the creation of various models of sniper and sporting and hunting weapons, for example, Orsis rifles. Some of them have serious professional training as a weapons designer, which they received within the walls of the M.V. Bauman. In a way, the rifle from Ritter & Stark, presented at the IWA-2016 exhibition, also became a certain challenge to the classic Ferlach weapons school. The Austro-Russian team, instead of the traditional hunting breakthrough, presented to the public a modern tactical sniper rifle in a modular design that is currently fashionable. The rifle received the designation MTR (Modular Tactical Rifle) SX-1, the design process was record-breaking - less than 3 months. 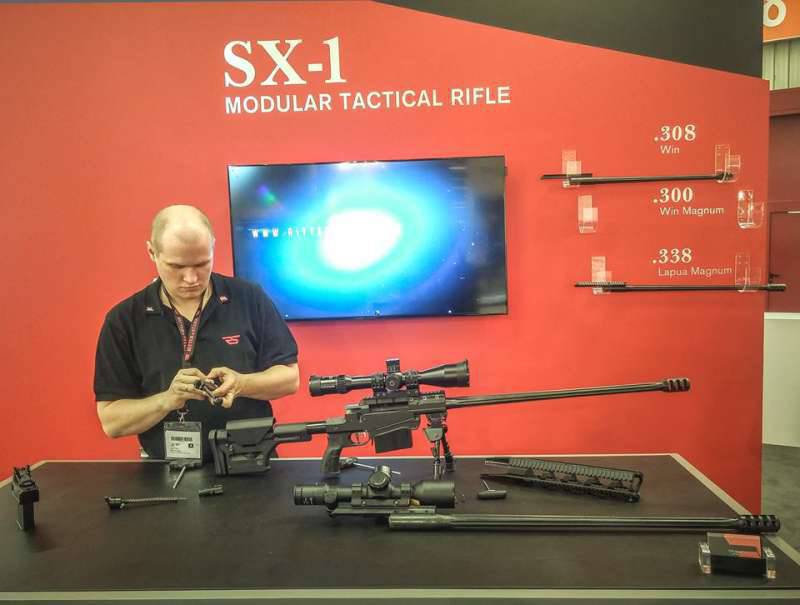 The modular principle of weapons today is particularly relevant, since it allows you to use the same sample in a variety of ways, allowing you to solve several problems at the expense of the interchangeability of components. By replacing the barrel, the head of the bolt and the magazine’s shaft, the weapon is converted into a multi-caliber gun, three-gauge cartridges are used: ). The demand for such small arms in the world is quite high, as in the army and law enforcement agencies there is a need for medium-range rifles. Snipers want to have such a weapon, which would exceed the range of traditional sniper rifles, such as the SVD, for more effective and successful counter-sniper actions.

The large-caliber 14,5-mm and 12,7-mm rifles used for these purposes are rather cumbersome and heavy, their use is not always convenient for solving combat missions, especially when patrolling or in the mountains. Such "hand guns" are a specific anti-material weapon, which is excellent for installation on various equipment, for the protection of stationary objects, for the destruction of unexploded ordnance and mines. Such weapons are poorly suited for combat missions that require maneuverability and mobility. This is confirmed by the recent official adoption by the German army of the G29 rifle, created under the .338 Lapua Magnum cartridge. The first batch of 115 rifles was ordered. The development of this rifle for the Bundeswehr was engaged in by Haenel from Suhl, the rifle was also shown in 2016 at the IWA exhibition. 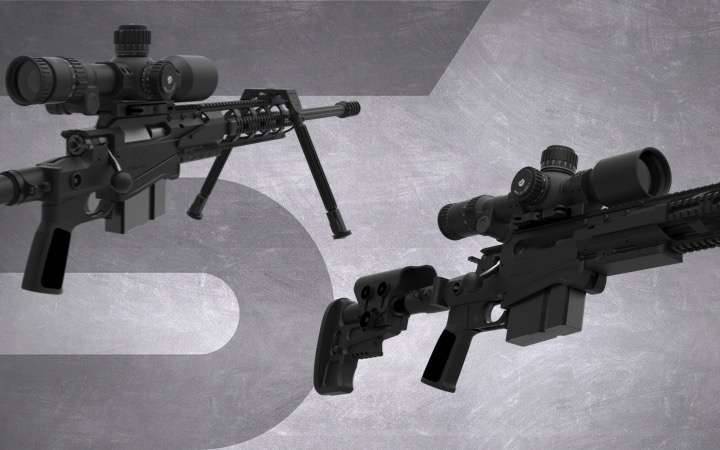 Compared to the G29, the Austrian rifle MTR SX-1 has the advantage already noted above - multi-caliber, it makes it easy to choose one of three calibers, which fully corresponds to the modern concept of armament of infantry units “weapon mix”, which replaced the other concept “all in one ". In accordance with the new concept, a single sample of small arms is not assigned to a soldier, a fighter himself can choose from several samples, based on the assigned combat missions and a tactical situation. The idea of ​​multi-caliber allows you to implement this concept.

The new sniper rifle from Ritter & Stark is a classic bolt action rifle that engages directly on the barrel when locked. The bolt has three lugs, which are located on the replaceable head, when unlocked, it rotates at an angle of 60 degrees. The rifle barrel has a length of 690 mm, inside the bore there are 6 grooves with a pitch of 254 mm, and in the .308 Win version the barrel is shortened to 623 mm and has a different groove (4 grooves with a pitch of 305 mm). The barrel is crowned with a high-performance four-chamber muzzle brake, which is attached to the M18x1 thread. 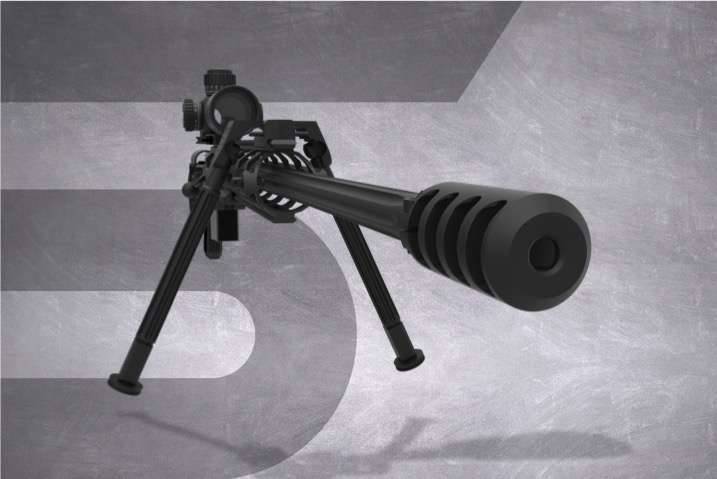 In the production of the barrel, Austrian gunsmiths used a rather rare electrochemical technology for creating grooves that did not create residual stresses in the metal during the processing of the barrel. On the outer surface are traditional grooves designed to reduce weight and cooling. The survivability of the rifle barrel is approximately 5000 shots. The receiver is made of aluminum alloy, it was equipped with the original patented system for changing the caliber, which has become a real pride of the developers. This system allows the shooter to quickly change the barrel without using special tools.

The MTR SX-1 rifle uses a trigger mechanism similar to the Remington 700 rifle, and the pistol grip of the Austrian rifle is compatible with the grips of rifles belonging to the AR-15 family. At the rear of the barrel there is a safety catch with three positions. It allows the shooter to easily visually check the state of the rifle. Detachable box magazines for 5 or 10 rounds are used with the rifle. There are two folding stocks to choose from, either the original Ritter & Stark design or the AR-15 rifle. The stock has a butt pad adjustable in length and height, as well as a vertically moving cheek. 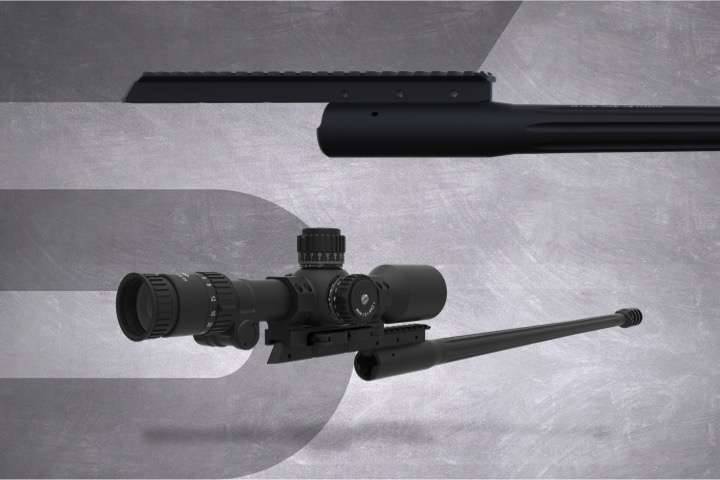 Picatinny rail MIL-STD-1913 is made in a single element with a barrel, which ensures a stable position of the optical sight. The Picatinny rail interface system is complemented by four slats, which are mounted on a metal forearm. The unusual mount of a bipod of a rifle attracts attention. It was placed not from below, as is usually the case, but from above, which is designed to reduce the risk of tipping the sniper rifle sideways. The MTR SX-1 rifle is relatively light for its class, in the standard version it weighs no more than 6,1 kg, and in the lightweight version - 5,3 kg (308 Win is lighter still by 200 g). The total length of the rifle is 1272 mm (.308 Win - 1183 mm), if you fold the butt, the rifle becomes shorter by 231 mm.