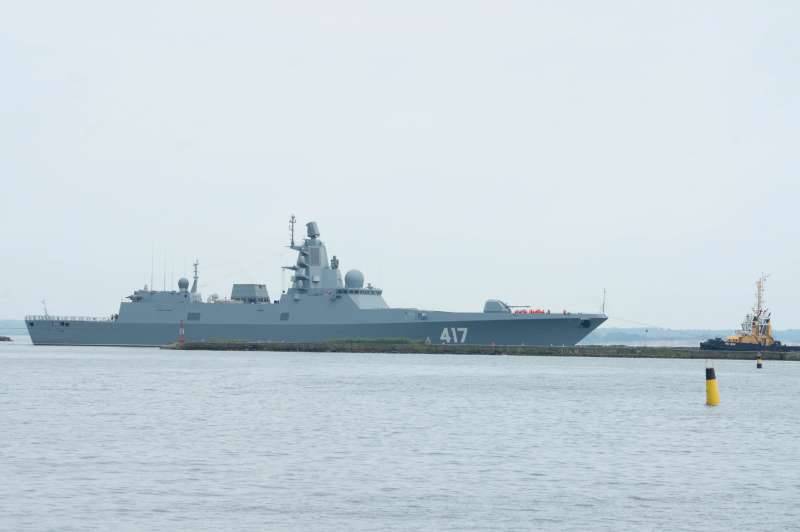 The trigger for writing this review was a phrase from an article devoted to issues of the ratio of the volumes and loads of ships.

Modern ships need large volumes to deploy weapons and equipment. And these volumes compared with armored ships of the Second World War have increased significantly. AND, despite the qualitative improvement of rocket technology from primitive 50-x samples to the most modern, the volumes allocated for rocket weapon, do not decrease.
Alexey Polyakov.

Let's start with the fact that, contrary to the title “XXI Century”, the respected author for some reason was ashamed to consider modern ships.

Instead of the frigate “Adm. Gorshkov and the Type-45 destroyer under the guise of “modern ships” were considered cruisers of past eras: “Grozny”, “Golden Eagle”, “Glory”. With all due respect to the heroes of the past, they have as much in common with the “Gorshkov” as the 17th century Spanish galleon resembles the ADB of the Russo-Japanese War.

A good example is the appearance of compact underdeck DPS, which changed the entire paradigm of storing and launching missile ammunition.

The rejection of the beam Mk.26 GMLS in favor of the notorious Mk.41 led to dramatic changes in the design of the ship. 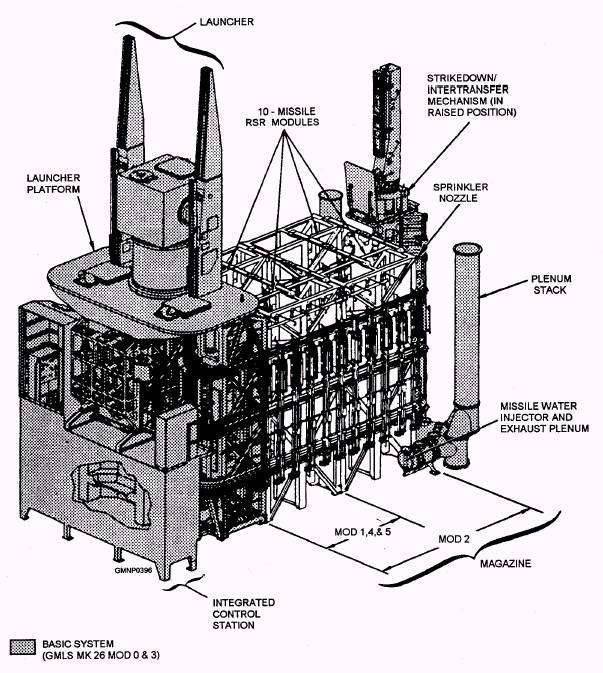 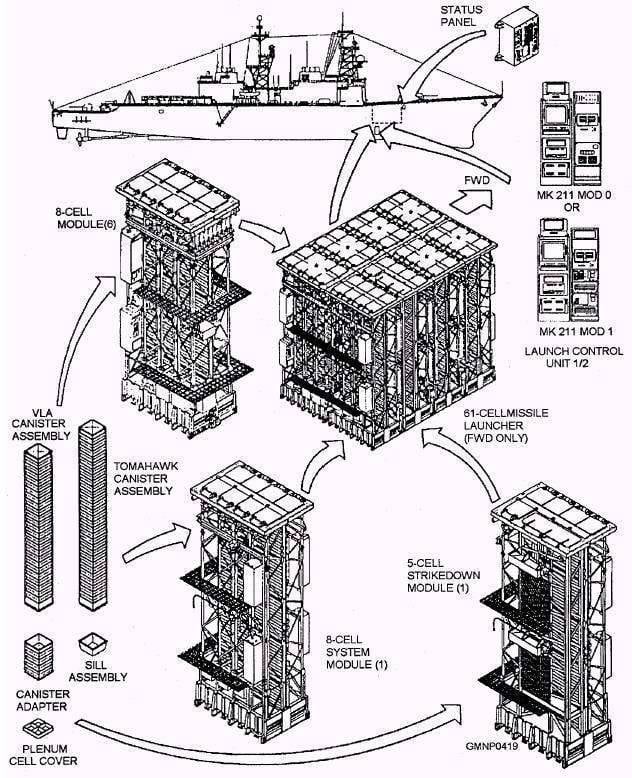 Possessing the same ammunition (64 missiles), the Mk.41 installation was TWICE lighter than its predecessor (117 versus 265 tons, “dry weight” without missiles). Energy consumption decreased 2,5 times (200 instead of 495 kW in peak mode, due to the lack of the need to move the missiles and rotate the “stand” of the launcher). The number of seafarers to maintain and control the installation was halved (10 instead of 20).

The overall dimensions of 64-cell UVC are 8,7 x 6,3 x 7,7 m. For comparison, the length of the beam MK.26 Mod.2 exceeded 12 meters. The depth and width of the rocket cellar roughly corresponded to the DPS.

Yes, I completely forgot. This version of UVP is designed for longer (+ 1 meters) and heavy (by 2 times) new-generation missiles - space interceptors and Tomahawks. The Mark-41 has export modifications for conventional missiles - such DPS is even lighter and more compact. 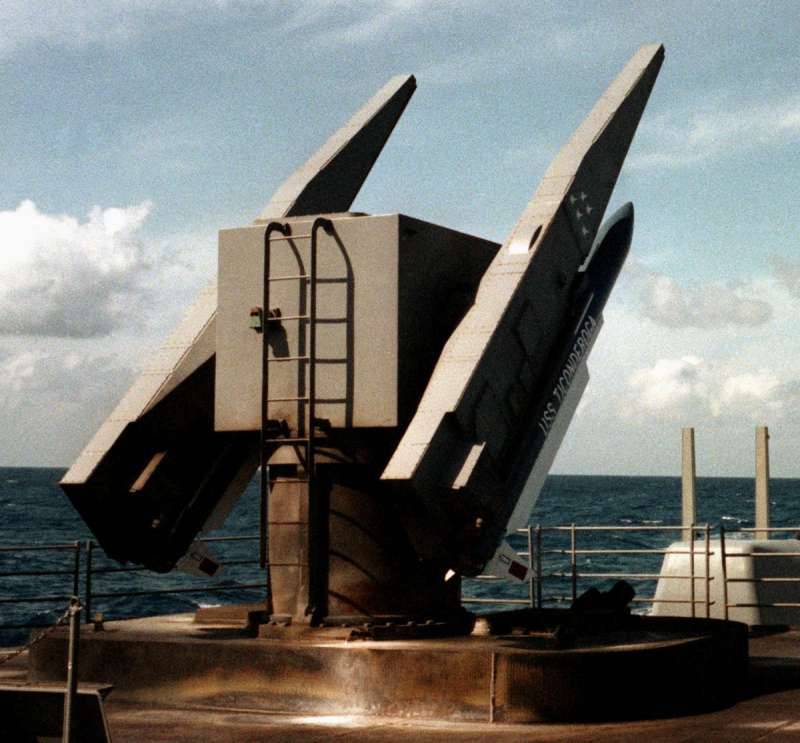 So consider how appropriate it is to equate the cruisers 60-80x. to modern destroyers and frigates.

Progress in the field of missile weapons is not all. Now with examples of real ships, you will see what a tremendous path the radar, detection means and fire control systems have traveled. 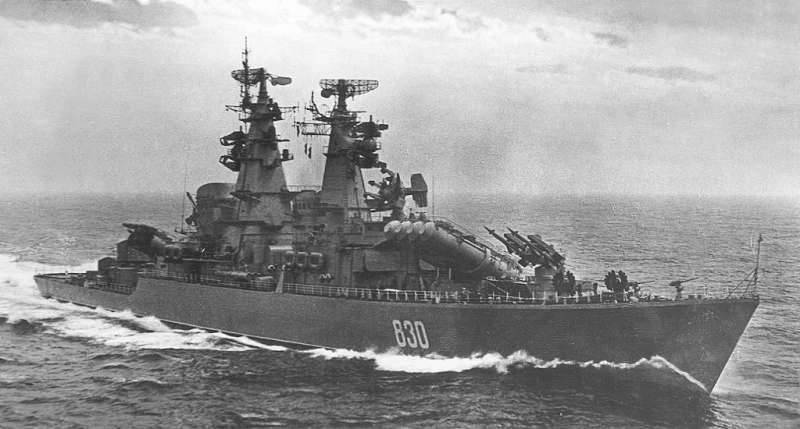 135 length meters. The total displacement is 4500 tons. Crew - 210 people (100 people. Less than the crew of the cruiser “Grozny”). Combat capabilities are incommensurable.

Ships in our time look different.

The first and most obvious is the absence of weapons on the decks. Storage and launch of missile ammunition produced from mines UVP, securely hidden in the depths of the hull. At the same time, the frigate's ammunition in the number and performance characteristics of the missiles exceeds all that was available on cruisers of previous eras.

On board the “Gorshkov” there are two UKKS modules, in total - 16 mines for the placement of strike weapons (supersonic anti-ship missiles Onyx, CD of the “Caliber” family). For comparison, on the cruiser of the 58 Ave there were two quadruple launchers and 16 of anti-ship missiles P-35. With no space inside the hull and had to stand on the open deck. If you do not take into account the performance of rockets, then the number of strike weapons cruiser and frigate have parity.

The anti-aircraft armament of the frigate is represented by the “Polyment-Redut” air defense missile system, whose ammunition load is located in the ATV cells 32. The launch weight of the 9М96Е2 rocket is 420 kg. The maximum firing range is 120 ... 150 km.

On board the cruiser “Grozny” there was also a Volna air defense system with 16 missile ammunition (two underdeck MIF-101 drums and a mobile girder launcher). The mass of the anti-aircraft missile is 923 kg., The maximum firing range of 15-18 km. 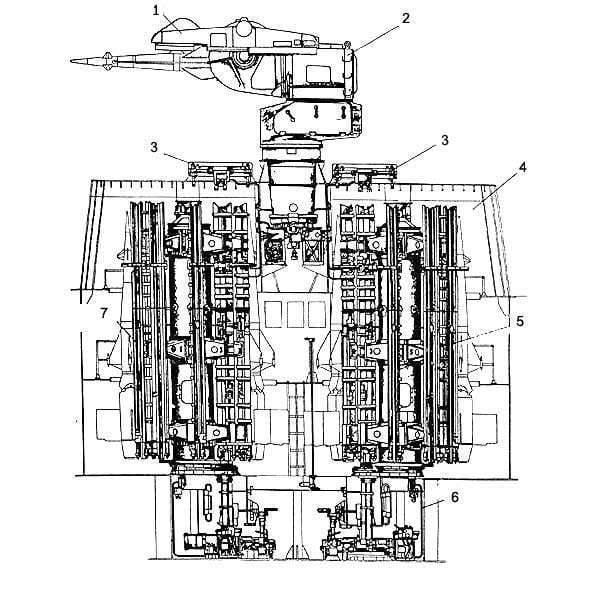 Launcher ZIF-101. For the correct perception of the dimensions, it is worth considering that the length of each rocket was 6 meters!

Once again, if we do not take into account the rate of fire of the complexes and the performance characteristics of the missiles, the modern frigate carries a similar in mass and twice as large in number rocket ammunition. If we turn a blind eye to the difference in combat capabilities, the parity of the rest of the weapons is also observed.

The only major difference is that the entire aft portion of the frigate superstructure is occupied. hangar ship helicopter. Unlike modern ships, the permanent basing of the aircraft on the cruiser 58 Ave was not foreseen (there was only a helipad).


The total of this calculation becomes a simple and obvious fact: the modern frigate, smaller by 1000 tons, carries more weapons than the cruisers of the 1960's. Which completely contradicts the statement:

... despite the qualitative improvement of rocket technology from the primitive 50-x samples to the most modern, the volumes allocated for rocket weapons do not decrease. 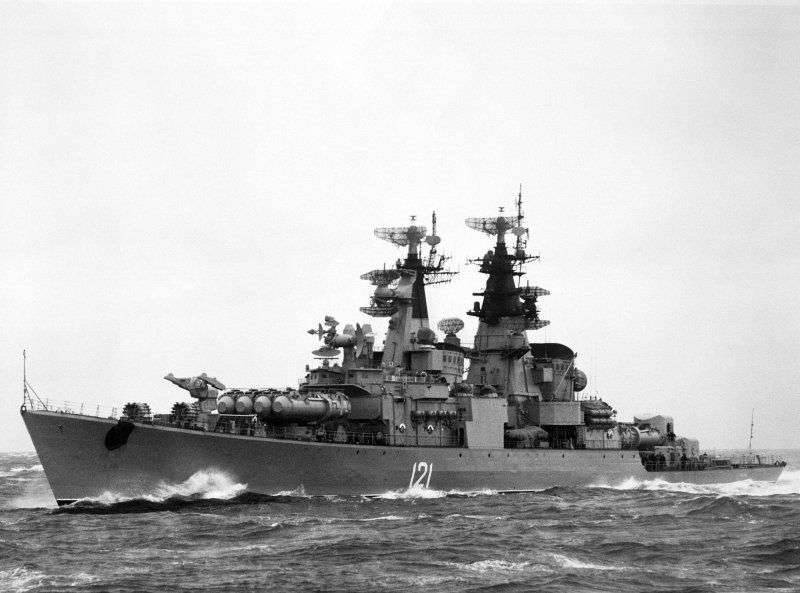 The second notable difference is the absence of bulky masts with a dozen parabolic antennas. The entire radar complex of a modern ship located inside the “pyramid” in the bow of the superstructure. The main secret of “Gorshkov” was the multipurpose radar 5П-20К “Polyment” of four fixed “mirrors” located on the lateral faces of the pyramid. 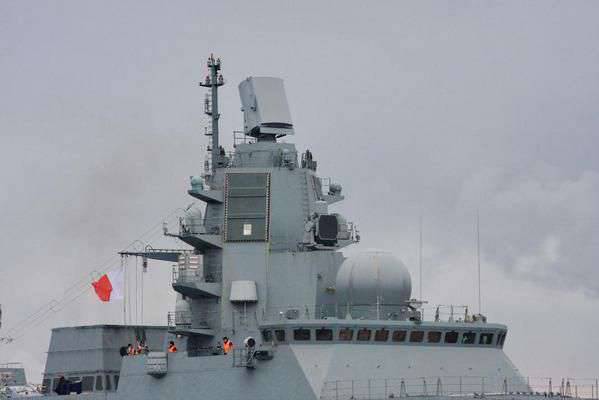 Opportunities "Polymeta" like martial fiction. Exceptionally high resolution. The ability to change the width of the beam. Instant (within milliseconds) scanning of a selected portion of the sky. Versatility and multitasking. Simultaneous firing on air targets up to 16.

At the top of the frigate's pyramidal fore-mast there is another antenna post. This is a general detection radar (5P27 “Furké-4” or “Fregat-MAE-4K”). The conciseness of anti-aircraft fire detection and control is the calling card of the frigate Admiral Gorshkov. Pass to the privileged club of the ships of the XXI century.

No bulky parabolic antennas and radar lights (than all the shipboard air defense systems of the past generation have sinned). The two universal radars take on the whole range of tasks for detecting and tracking air targets and controlling the missiles launched, ensuring the operation of the naval anti-aircraft weapons. 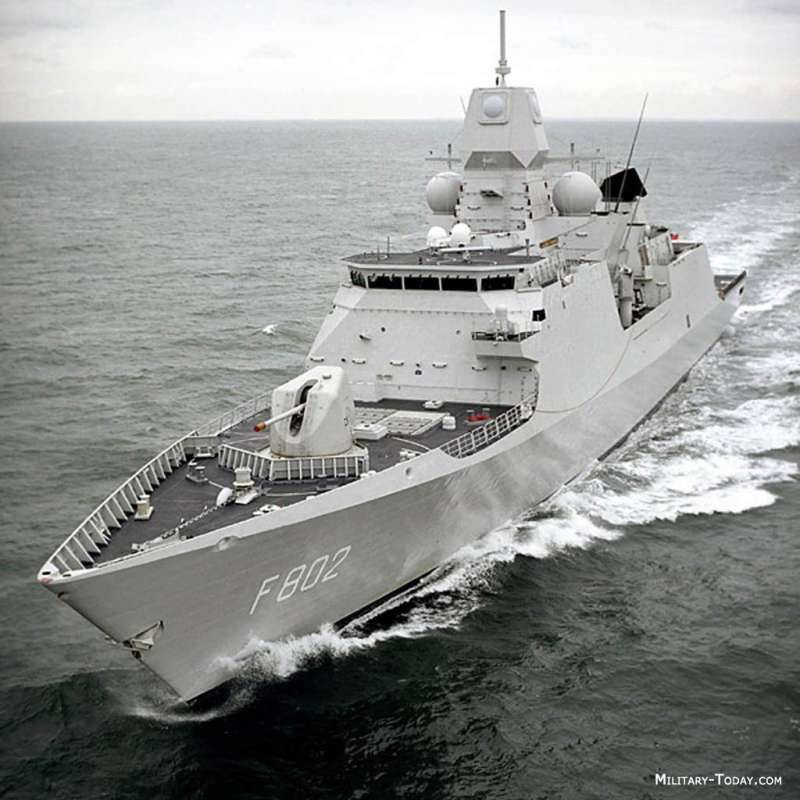 Terrible frigate with an even more sophisticated design.

Max. 2000 km detection range, 40 missile silos, helicopter and other universal weapons. From 2017, frigates of this type will be included in the US missile defense system in Europe. 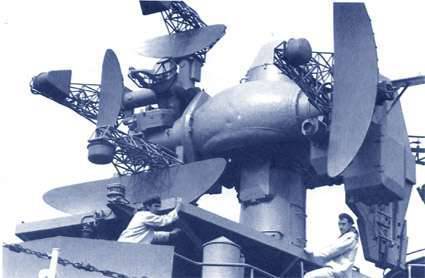 In the picture - the antenna post “Yatagan” of the fire control system of the Volna air defense system. Five parabolic antennas to determine the exact position of the target and the transmission of radio commands to the launched missiles. For the initial detection used two more radars "Angara", placed on the tops of both masts.

And you say nothing has changed since then.

In principle, all these problems were peculiar to all ships of that time. Even the most advanced of domestic cruisers (1164 and 1144 Orlan avenues) sinned with a large number of cumbersome and inefficient equipment, their missiles required specialized guidance and target illumination stations. By the way, the American Aegis (1979 system of the year) suffers a similar disadvantage.

Complaints about the volume required for the placement of modern electronics and some special measures for cooling and air conditioning of the premises are just as naive. This whole baby talk is refuted by a single fact: all the means of detection and the equipment of the C-300 command centers on mobile chassis! And this is the beginning of 1980's, when even the most desperate fiction writers could not dream of laptops and “iPhones”. 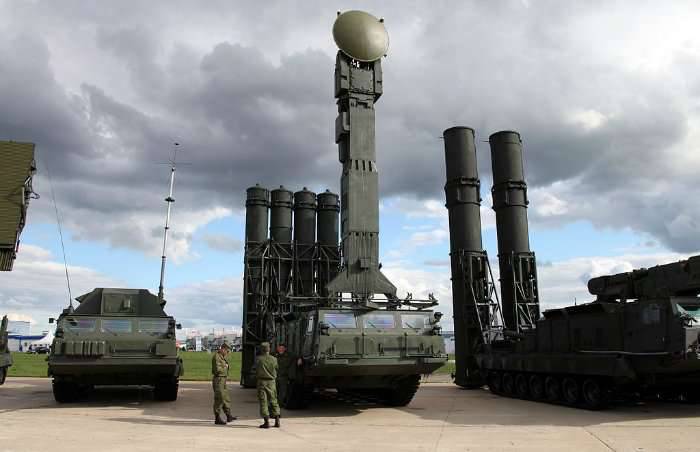 Ice tundra, heat of the Hmeimim airbase, rain-snow, mobile air defense system should be able to work in any conditions! Does a similar complex on board a modern ship really need some huge “engine rooms" with incredible measures to control air quality?

What kind of nonsense? In what century do those who claim this live?

On the modern ship everything has changed. The layout, weapons, the composition of the means of detection and MSA, the power plant (high-performance diesel engines and turbines instead of boilers), automation, reduced the number of crew.

That is why it became possible to build compact warships with the most powerful strike and defensive weapons in the hull with a displacement of 4500-6000 tons.