"The first soldier of the revolution" 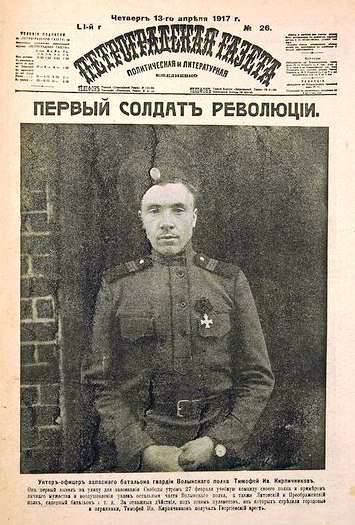 Timofey Ivanovich Kirpichnikov was born in 1892. Contrary to the popular myth that he was a student and even the son of a professor, Kirpichnikov came from a simple peasant old believer family who lived in the village of Dmitrovka in the Saransk district of the Penza province. It was hard to say whether or not it influenced participation in the revolution of belonging to the Old Believers, but the fact remains that the “first soldier of the revolution” was an Old Believer. Having received the basics of education in the folk school, Kirpichnikov, according to some data, worked as a fireman on one of the railways, and upon reaching the draft age, even before the start of the First World War, he ended up in the active army. According to the reports of the revolutionary newspapers, Kirpichnikov during the war was a participant in the hostilities on the Austrian front, where he was wounded in the arm, and then, after treatment at the hospital, was sent to spare parts stationed in Petrograd. This, unfortunately, scant information about the pre-revolutionary biography Kirpichnikova and ends.

The beginning of the February revolution caught 25-year-old Timofey Kirpichnikov as senior sergeant-major of the training team of the reserve battalion of the Life Guards of the Volynsky regiment stationed in the capital of the Empire, Petrograd. 27 February 1917 of the year in 5 hours of the morning Kirpichnikov, on a personal initiative, raised the soldiers subordinate to him, armed them and built them before the arrival of the authorities, determined to fight the battalion commander. The day before, the soldiers under the command of their commander, Captain Lashkevich, were withdrawn to the city in connection with the unrest in the capital. 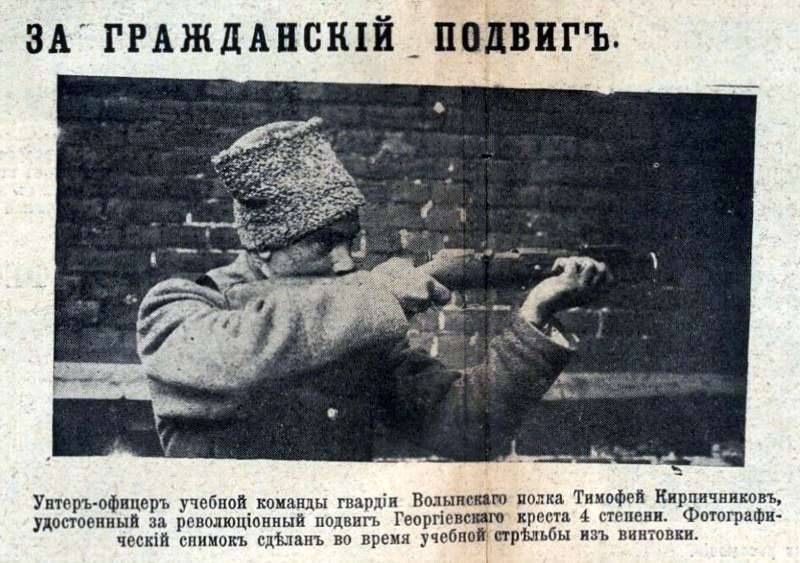 Later Kirpichnikov told about these events. On the morning of February 24, a platoon of a training team under his command was sent to Znamenskaya Square (now - Vosstaniya Square) with the task of dispelling the crowd: "The public surrounded us from behind, those who were shouting at us:" Soldiers, do not shoot. " I said: - "Do not be afraid, we will not shoot." - A crowd of people with red flags approached us. At that time I was stunned. I think: "to shoot - died, not to shoot - died". The officer was standing here. I go to him and say: "They are going, they are asking for bread, they will pass and go away." He looked at me, smiled and said nothing. He stands, says nothing, and with a gesture he shows - to pass - he says: "Come on, come on." The crowd passed - it rounded us on both sides, and stopped near the monument to [Emperor Alexander III]. Passing shouted: "Hooray, well done soldiers." Speakers there spoke: that spoke did not hear. We stayed there until 6 hours. ” 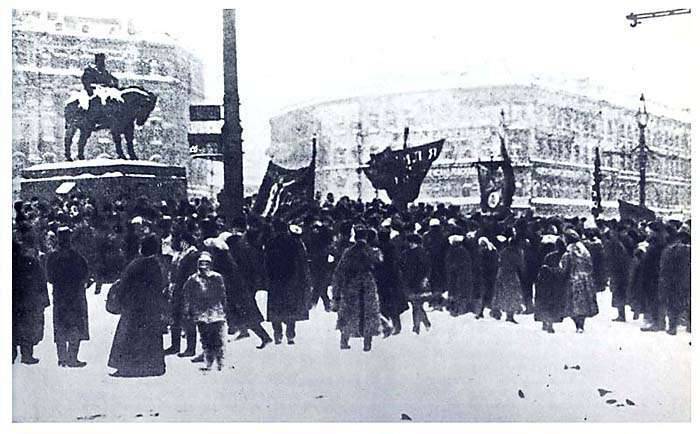 The next day, the picture almost exactly repeated. And when it became known that the commander himself, staff captain Lashkevich, Kirpichnikov, who realized that this time they couldn’t avoid shooting, would lead the training team to establish order in the city, he began to persuade the soldiers not to shoot. However, from the first time, he was unable to organize the soldiers, and on February 12, the Volyns were led out again by their commander, this time to Nevsky Prospect. “I was behind the crowd in the crowd, I went to watch,” Kirpichnikov recalled. - I go up and say: "It is a thunderstorm. Integral trouble - what shall we do?" The soldiers say: "Really trouble - so and we will die." I said: “Remember, if you are forced to shoot, - shoot up. You can’t stop fulfilling the order - you can die. And God would give back to the barracks tonight, we will decide our fate”. As a result, the majority of Volyns people deliberately shot past the target that day.
Revolutionary postcard, 1917 year

On his return to the barracks, Kirpichnikov persuaded the platoon at night to refuse to participate in the suppression of the revolutionary rebellion. “I (...) asked for my junior non-commissioned officer, Mikhail Markov. I asked him if he agreed not to go tomorrow, ”Kirpichnikov recalled. - He says: "I agree." I ordered him to gather all platoon commanders. Platoon commanders agreed. (...) I declare: “To win or to die. I think it’s better to die with honor. Fathers, mothers, sisters, brothers, brides are asking for bread. Will we beat them? Have you seen the blood that flowed through the streets? I don’t suggest go. I personally don't want to. " Vzvodnye said: "We will not lag behind you. Do what you want." I kissed them all and said: "Let us remain friends. We will not betray one another and live in our hands will not be given. Death is only now terrible. They will kill you - you will not know what is being done." The platoon agreed, of course. The duty officer asked to convene all separated. Those came half-dressed (...). "You, close assistants. We, platoon commanders, decided not to go shooting tomorrow." They said unanimously: "We agree, only your team and we will execute." Vzvodnym and separated, I again declared: "Tomorrow we are not going. To execute my team and watch only what I will do." Everything was decided: to get up tomorrow at 6 hours, but at five. ” 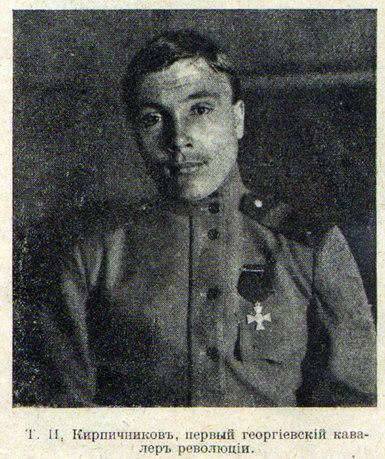 The headquarters captain, Igor S. Lashkevich, who arrived in the morning, tried to influence the soldiers who refused to suppress unrest in the capital, but to no avail. Driven by soldiers from the barracks, Lashkevich was shot in the back. After that, the insurgent training team with weapons in her hands she moved to the reserve battalion of her regiment and carried him along. Kirpichnikov did not stop there and led the soldiers on - to raise neighboring regiments, which resulted in thousands of armed soldiers who joined the revolution a few hours later. During the day, other parts of the Petrograd garrison joined the armed rebellion, which ultimately led to the overthrow of the monarchy and the victory of the revolution. At the same time, from the testimony of Kirpichnikov it follows that when confronted with a group of soldiers of the Guards Semenov regiment under the command of three ensigns who tried to resist, he and his charges shot officers with revolvers on Liteiny Avenue.

For a short time, Timofey Kirpichnikov became a hero of the revolution. He was called "the first soldier of the revolution", "the first hero of the uprising", "the hero who raised troops against the tsarist regime." Newspapers took interviews from Kirpichnikov and published his photographs, accompanying them with stories of accomplished "exploits." The Provisional Government made the instigator of the unrest in the Petrograd garrison in the rank of sub-ensign and awarded the 4 degree with the Cross of St. George “because February, at the head of the training team of the battalion, [he] was the first to start the struggle for the freedom of the people and the creation of the New Building, and ( ...) an example of personal bravery led the soldiers of his battalion with him ... ”. The commander-in-chief of the troops of the Petrograd Military District, General L. G. Kornilov, personally handed the honorary military award to the revolutionary Kirpichnikov. 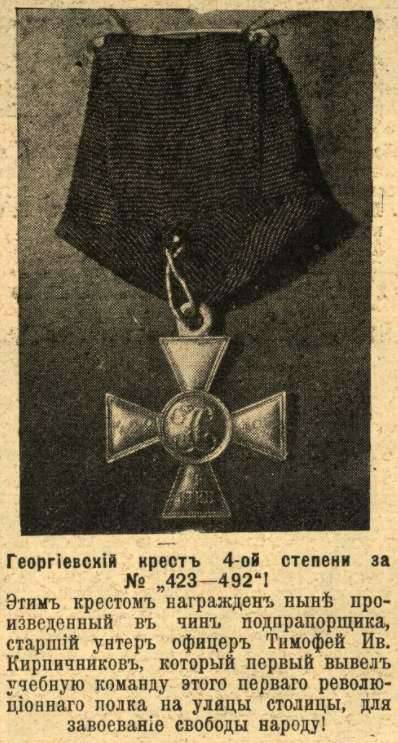 However, speaking of the role of Timofey Kirpichnikov in the February events, it must be borne in mind that he was not the only one responsible for the mass transfer of soldiers to the side of the revolution. When an investigation was carried out hot on the subject of who first brought the Volynsky regiment to the streets of Petrograd and led him to support the revolution, it turned out that seven soldiers were claiming for this role at once. A survey conducted among officers who joined the revolution gave six more names ... Thus, there is every reason to believe that Kirpichnikov was just one of the leaders of the soldiers' masses who acted together with senior noncommissioned officers V. Kozlov and F. Konnikov, junior unters M.Markov, I.Drenichev, M.Brodnikov and other soldiers' commanders (more than four dozen names!). But the fact that he stood out against the background of his other revolutionary-minded colleagues was beyond doubt. “It is not known how further events would develop. Perhaps, in the morning of February 27, there would be no unrest at all, but Timofey Ivanovich Kirpichnikov decided to say his weighty word, ”the modern author VA Bryukhanov notes.


Historians are still arguing about who killed the staff captain Lashkevich. According to the “official” version, this “feat” was personally committed by Kirpichnikov, however there are other opinions. The fact is that in the memories that have come down to us about this tragic event, different names of the officer's killers are indicated (or are not called at all). And Kirpichnikov himself did not say a word about his role in the murder of an officer in his interviews and memoirs. Only one thing is known for certain - after the hastily leaving officer, someone shot from the window of the barracks in the back. Some called Lashkevich Kirpichnikov’s killer, others — Private Sokolov, others — NCO Kozlov, the fourth — Unter Markov and the corporal Orlov. But, be that as it may, Kirpichnikova’s fault in the tragedy that happened is obvious, the question is only in her degree. As the revolution historian ABNikolayev notes, “Kirpichnikov personally did not kill his commander, but it was he who developed the plan of the uprising, one of the points of which was the assassination of Lashkevich, he also took part in appointing soldiers to carry out this assassination. (...) Recall that Kirpichnikov was one of the murderers of three Semenov ensigns on Liteyny Ave. in the afternoon of February 27. ” 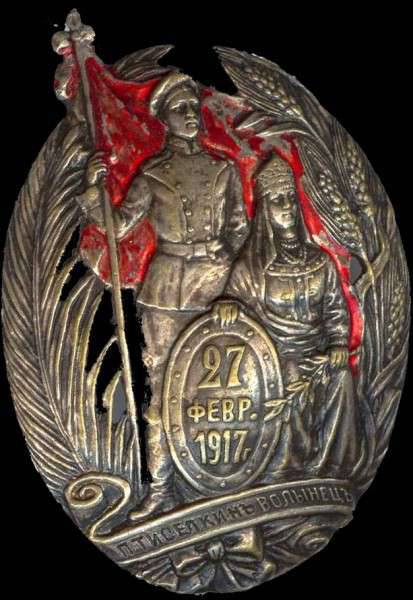 Badge of the Volynsky Regiment, 1917 year

Immediately ascended to the top of fame in the spring days of 1917, Timofey Kirpichnikov also quickly descended from historical the scene. The following is known about his further biography: in the days of the April political crisis, he, according to some reports, led the Volyn regiment to support the Provisional Government, in May 1917 he was promoted to officer rank of ensign, demanded that the authorities restore order and fight against anarchy, and after The October Revolution resolutely opposed the Bolsheviks. Kirpichnikov tried to provide support for the Kerensky-Krasnov campaign against Petrograd, in 1918 he participated in clashes with the Red Guards, was briefly arrested, and then demobilized.

After moving to the Don, Kirpichnikov hoped to continue the fight against the Bolsheviks, but fate decreed otherwise - the “first soldier of the revolution” was shot by the whites in the year 1919. “It would have been fateful for Ensign Kirpichnikov to meet with Colonel Kutepov,” recalled General B.A. Steyfon. - It is not difficult to imagine how Alexander Pavlovich experienced this meeting ... (...) Since the beginning of the revolution, Kirpichnikov was declared the "hero of the revolution" (...) All this long lasting horror made a horrible impression on the officers. (...) "Take the ensign", - Alexander Pavlovich ordered the adjutant. A few minutes later shots rang out in the yard ... "