March 19 2016
24
At Severnaya Verf, the formation of the rear support vessel Vsevolod Bobrov (project 23120) has been completed, reports MIC with reference to the press service of the enterprise. 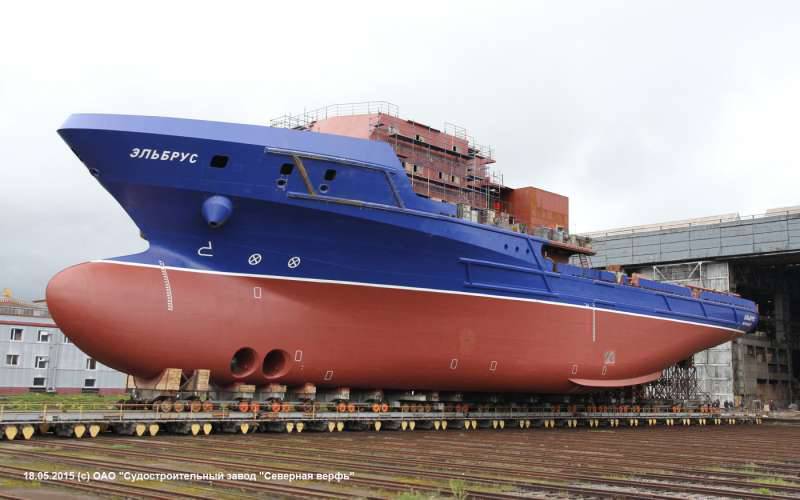 “The ship has already installed an electric power installation, continues the construction of the superstructure, testing the compartments for impenetrability, and processing the foundations for propeller steering columns. In May, the vessel is scheduled to roll out to an open slipway, assembled a wheelhouse, install two 138 propeller speakers each. In July, 2016, the launch of the vessel "Vsevolod Bobrov" is planned, "the release says.

It clarifies that the project was developed by the St. Petersburg KB "Spetssudoproekt".

“The logistic support vessel is intended for loading, storing, transporting and transferring dry cargo to the shore and various ships, as well as for towing support and assistance to the crews of ships and ships in distress. "Vsevolod Bobrov" has a high ice class ARC4, which gives him the opportunity to sail in the Arctic latitudes, "- noted in the information of the shipyard.

Outgoing work is continuing on another ship of the same project, Elbrus. At present, “equipment is being sewed and installed in residential and domestic premises, commissioning works on various units and devices, installation and hydraulic tests of general shipboard systems and power plant systems are being performed,” the message says.

Ctrl Enter
Noticed oshЫbku Highlight text and press. Ctrl + Enter
We are
In St. Petersburg, began the ceremony of launching the ship of the Navy "Vsevolod Bobrov"Roll-out An-178
Military Reviewin Yandex News
Military Reviewin Google News
24 comments
Information
Dear reader, to leave comments on the publication, you must sign in.