Ukraine with the help of the American "Westinghouse" was going to "disperse" the reactors at its nuclear power plants. Experts: "This is Another Chernobyl"

March 21 2016
87
Last week, the Ukrainian company Energoatom announced that the Ukrainian nuclear power industry is ready to develop in close contact with its American partners. The insatiable desire to develop resulted in the signing of the so-called memorandum of understanding between the Ukrainian company Turboatom and the American Westinghouse Electric, the one that has recently intensified to promote TVS-W fuel elements in Ukraine - fuel rods of their own (American) production.


The promotion of American rods instead of Russian ones would long ago have been declared the next "peremog" of Kiev, if not for one thing. The fact is that after loading the fuel assemblies of Westinghouse Electric, for example, they were destroyed at the South-Ukrainian NPP. This destruction had almost led to enormous consequences in its negative, however, it seemed like it had done well. Temporarily...

To convince the Ukrainian "partners" that the nuclear "peremoga" over Russia is already close, representatives of the American company said that, they say, in an emergency that arose after loading TVS-W, the fault was ... the Russians. Say, these are Russian (Soviet) technologies that have provided such a design of reactors that flexible American rods will “try to take the form that previously deformed cells take.” In general, Moscow was to blame for the deformation of the American rods at the Ukrainian power plant. Well, who else ...

"Klyat moskalyaki!" - Shouted in Kiev and, of course, announced their full readiness to continue cooperation with the American "friends of Ukraine." They say, well, let them "be a little deformed" - a slight democratic deformation will not prevent us ...

It should be noted here that the process began long before the “revolution of hydration”, and after that the process was fairly intensified. And here came a whole memorandum between Westinghouse Electric and Turboatom, which, as reported press office Ukrainian "Energoatom", is as follows:
This is a gradual increase in the power of VVER-1000 type reactors to the level of 110% of nominal (in Ukraine, 13 power units with VVER-1000 reactors). Together with the Kharkov factory "Turboatom" "Westinghouse" announced the support of "Energoatom" in the implementation of such a project.

The president of Energoatom, Yury Nedashkovsky, said that such an agreement was aimed at “ensuring the country's energy security.” Well, of course! Safety first! And to improve it, Americans will help disperse Soviet-developed reactors. With a simultaneous increase in nominal electrical and thermal capacity ... Only one thing is surprising: why, in order to "ensure the security of Ukraine", increase the power of reactors will be "only" by 10%, and not by all 100? ..

By the way, the same Mr. Nedashkovsky, who graduated from the Odessa Polytechnic University in 1983 in the specialty “Nuclear Power Plants and Installations”, and also covered the path from the Crawler of the boiler equipment at the Khmelnitsky NPP to its Director General, adds something else about “productive cooperation "With the American side. According to him, productivity is already paying off - this, in particular, is about cooperation in creating a centralized storage facility for spent nuclear fuel in Ukraine.

From a statement by Aziz Dag, Vice President of Westinghouse Electric, expressing obvious satisfaction with contacts with the Ukrainian side:
Strategic cooperation with Turboatom is an excellent example of how Westinghouse provides its client, Energoatom, with innovative technical solutions to further improve the efficiency and safety of nuclear power plants. We also look forward to working with local Ukrainian suppliers to support the Energoatom project to increase NPP capacity.

In general, the question of whether it is necessary to increase the capacity of reactors installed at Ukrainian nuclear power plants, as well as the issue of safety, is not even worth it. If the "partner" from the United States said: "it is necessary!", Then Kiev responds firmly: "there is!"

In this regard, the comments of specialists in the field of nuclear energy - those who did not fall under the lobbyist influence of the “Westinghouse” or other “friends” of Ukraine attract attention. Valentin Zemlyansky, who is the head of the energy programs of the Center for World Economy and International Relations, expressed his opinion on the implementation of the Ukrainian-American program to increase reactor capacity. According to him, an attempt to increase not only the power of the reactors used at Ukrainian NPPs, but also attempts to equalize the capacity to create a “unified power system” is an extremely dangerous undertaking.

In an interview with the Ukrainian edition “Facts and Comments” Valentin Zemlyansky says that the Ukrainian venture can lead to a new Chernobyl. Moreover, the expert states that if the maneuvering with the reactor capacities will indeed be carried out, then it is worth thinking about leaving the country.

From an interview with an expert:
If they decide to maneuver atomic blocks, I advise you to leave the country. What can happen to a nuclear reactor if we start maneuvering them, we all saw in April 1986 of the year. Then, in Chernobyl, in essence, they worked out the option of maneuvering the reactor. The constructions of nuclear reactors of Soviet construction are not designed for daily maneuvering, it is possible to maneuver, but very slowly and no more than once a year. And not as the ministry proposes to reduce and increase capacity several times a day.

Valentin Zemlyansky believes that attempts to increase the share of electricity generated by nuclear power plants look strange. First, it is necessary to do something with thermal power plants that are already operating in their own system - in particular, to remove their units from the system. Secondly, it is not clear to whom Ukraine is going to supply additional electricity, if it tries to save all the capacities of the power plants, which will require huge investments.

Statements that such steps would reduce the cost of electricity in Ukraine look altogether ridiculous, if only because for an American company trying to settle in Ukraine finally, the matter of first importance is profit growth. And the Ukrainian electricity producers do not intend, spending on changes, to lower tariffs either.

Zemlyansky:
Several billion hryvnia was allocated for the development of hydrogeneration, but there is nothing to direct them to, water resources have declined. Meanwhile, thermal generation works at a loss, not being able to upgrade. The atomic generation also has nothing to build a repository for spent fuel and continue the life cycle of power units. The funds would have appeared if, finally, in the Ukrainian power industry market mechanisms had begun to work.

However, market mechanisms in Ukraine so far work only for individual government and business representatives who are ready to turn the country into a nuclear testing ground with an unpredictable result in order to receive short-term profits and meet the Maidan interests. 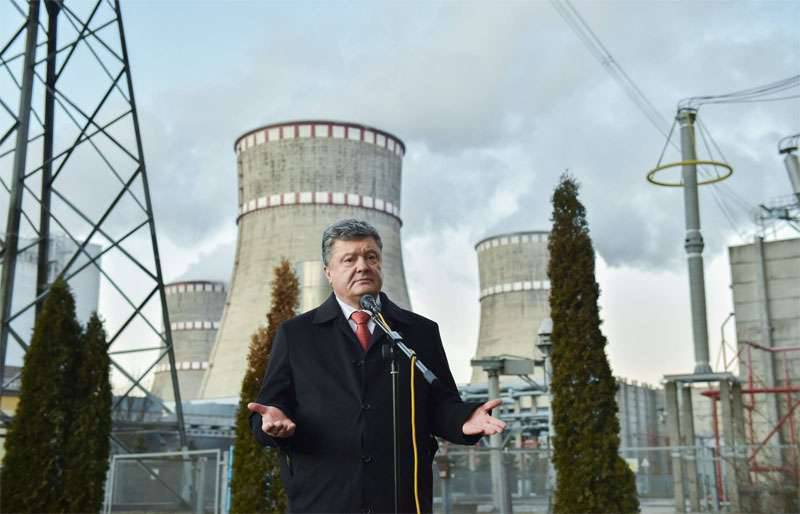 That's just Kiev continues to assure that he, you know, everything is under control.

From the message of Energoatom about the status of the introduction of a "new" nuclear fuel at Ukrainian NPPs (on 18 in March 2016) (translation):

As of today, SE “NAEK“ Energoatom ”has completed a significant amount of work on resolving the issue of diversification of nuclear fuel sources to meet the needs of Ukrainian NPP units.

Work on the introduction of the fuel company "Westinghouse" at the power units of nuclear power plants of Ukraine are carried out in accordance with the following main stages:

Implementation of the project "Qualification of nuclear fuel for Ukraine" (PCNTU). The executive agreement between the governments of Ukraine and the USA regarding the CPNT was signed on 5 June 2000. The terms of reference agreed 20 June 2000.

The project envisaged the development and supply to NPPs of Ukraine of an alternative nuclear fuel produced by Westinghouse jointly with Russian-made fuel (TVEL JSC) as part of the mixed core loading of the reactor at the pilot power unit No. 3 YuUAES.

In the framework of the first stage of the project, the following results were obtained:

In the NSC "KIPT" a Center for the design of reactor cores (CPAZ) was created, which is staffed with qualified personnel who have undergone appropriate training in the United States. Equipment and settlement programs were transferred to the Center for Main Businesses (ZPAZ), a license was received to carry out the work.

The work was done to substantiate the compatibility of fuel assemblies manufactured by TVEL JSC (Russia) and Westinghouse Company under the conditions of operation of the “mixed core” of power unit No. 3 OP YuUAES.

6 licensed pilot fuel assemblies and obtained a permit for NCRU to test them.

In the period from 2005 to 2010, the pilot operation of 6 TVS-W was conducted during the 4 fuel campaigns at power unit No. 3 of YuUAES OP. According to the results of the operation and inspection 6 experienced TVS-W remarksimpeding the further introduction of nuclear fuel produced by Westinghouse, not found.

A reactor core monitoring system under a mixed core (BEACON) was put into pilot operation.
As part of the second phase of the project, in August 2009 of the year Ukraine was supplied with nuclear fuel (42 TVS-W) produced by Westinghouse and in March 2010 of the year, after receiving permission from the State Nuclear Regulatory Authority of Ukraine, it was loaded into the active zone of power unit No. 3 OP YuUAES. In the active zone of the power unit No. 2 OP SUNPP, nuclear fuel produced by Westinghouse was loaded in August 2011. (...)

24 February 2016 held the 8-e meeting of the operational headquarters for the introduction of modernized nuclear fuel produced by the company “Westinghouse” (TVS-WR) at the power units of Ukrainian nuclear power plants.

That is, now even if an accident happens during tests at Ukrainian NPPs, they will try to keep silent about it. Gives information policy 30-year-old. 26 April 1986 did not teach anything?