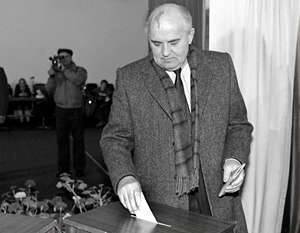 Exactly 25 years ago, the citizens of the Soviet Union voted to preserve the USSR at a special all-Union referendum. More precisely, they believed that they were voting precisely for this, but the reality turned out to be much more complicated. It included not only betrayal, when the Union was dissolved without regard to the plebiscite, but also a much more multi-staged lie.


A quarter of a century ago, Soviet citizens came to the polls to speak out about the fate of their country. There was a vote, which is still called a referendum on the preservation of the USSR. The overwhelming majority of those who voted - 76%, or 112 million people in absolute terms - were in favor. But for what exactly? Did citizens of the USSR understand that they were actually voting not for preservation, but for the collapse of the country?

Referendum as a shock therapy

The program of political and socioeconomic transformations proclaimed by Mikhail Gorbachev’s team almost immediately resulted in a sharp state crisis. Beginning in 1986, bloody conflicts on ethnic grounds flared up in the USSR. Initially, Alma-Ata, then the Armenian-Azerbaijani conflict, the pogroms in Sumgait, Kirovabad, the massacre in the Kazakh New Uzgen, the massacre in Fergana, the pogroms in Andijan, Osh, Baku. At the same time, the nationalist movements in the Baltic States that seemed to appear out of nowhere were rapidly gaining strength. From November 1988 to July 1989, the Estonian, Lithuanian, Latvian SSR consistently declared their sovereignty, soon followed by the Azerbaijan and Georgian SSR.
The majority of Soviet citizens in these conditions evaluated the processes taking place in the country - and this must be recognized! - completely inadequate. It almost did not occur to anyone that the conflicts on the periphery could mean the rapid collapse of the country. The union seemed unshakable. There were no precedents for secession from the Soviet state. There was no legal procedure for secession of the republics. People waited for restoring order and normalizing the situation.

In the resolution on its conduct, the only question for the Soviet people was formulated as follows: “Do you consider it necessary to preserve the Union of Soviet Socialist Republics as a renewed federation of equal sovereign republics, in which the rights and freedoms of a person of any nationality will be fully guaranteed”. And the answer options are “yes” or “no.”

From the USSR to Russia: how our country has changed in thirty years
Some assessments of this document have been preserved, which is interesting - from the anti-Soviet-minded democratic public. Thus, the people's deputy of the USSR, Galina Starovoytova, spoke of the "piling up of contradictory and even mutually exclusive concepts." And the human rights activist, a member of the Moscow Helsinki Group, Malva Landa, stated: “The question is sly, it’s intended that people will not be able to figure it out. This is not one, but at least six questions. ” True, human rights activists and democrats at that time believed that this confusion was specially created by the Communists to conceal in a fog the vague wording of future “unpopular and anti-people actions” to stifle free thinking and return back to Brezhnev times.
In one thing, they were not mistaken - the vague wording really served to conceal future "unpopular and anti-people actions." But with the exact opposite sign.

The referendum was held in nine Soviet republics. Moldova, Armenia, Georgia, Latvia, Lithuania and Estonia held a referendum on their territory sabotaged, although the vote did not bypass them - they were joined to the “private order” by the example of South Ossetia, Transdniestria, Gagauzia, and northeastern regions of Estonia. Not everything went smoothly and where the plebiscite was fully implemented. Thus, in the Kazakh SSR, the wording of the question was changed to: “Do you consider it necessary to preserve the USSR as a Union of equal sovereign states?” In Ukraine, an additional question was included in the bulletin: “Do you agree that Ukraine should be part of the Union of Soviet Sovereign states on the basis of the Declaration of State Sovereignty of Ukraine? ". In this and in another case (and obviously not by chance) the new state was called the Union of Sovereign States (VCC).

Reassembly - the result of restructuring

The question of reorganizing the USSR was raised at the end of the 1980s. Initially, it was about amending the Constitution with the aim of restructuring life "on democratic principles." The riots that began in the country, and then the “parade of sovereignties” with the announcement of the priority of republican legislation over the union legislation, caused a reaction to a considerable degree paradoxical. Instead of suspending reforms before restoring order and establishing the rule of law throughout the country, it was decided to force reforms.
In December, the Supreme Soviet of the USSR as a whole approved a draft of the new Union Treaty proposed by Mikhail Gorbachev in December, replacing the document in force with 1990, uniting the country into a single whole. That is, in the conditions of increasing disintegration of the state, the first president of the USSR decided to disassemble the country and re-assemble it on new principles.

What was the basis of this Union? The draft of the Union Treaty was finalized in the spring and summer of 1991, during numerous meetings and meetings with republican leaders at the Gorbachev country residence in Novo-Ogarevo. The president of the country actively discussed rebuilding the state with the growing national elites. The final version of the Treaty on the Union of Sovereign States (SSG - a surprising coincidence with the Kazakh and Ukrainian bulletins, isn’t it?) Was published in the Pravda newspaper 15 August 1991. In particular, it said: “The states that form the Union, have full political power, independently determine their national-state structure, the system of government and management”. Questions of the formation of the law-enforcement system, of their own army were transferred to the jurisdiction of the states already, and not even the "sovereign republics" (the masks were dropped), they could independently act on the foreign policy arena on a number of issues.

The new Union of sovereign states, therefore, was only a relatively civilized form of divorce.

But what about the referendum? He perfectly fit into the logic of the processes. Recall that in December 1990, the draft of the new Union Treaty was approved for work, on March 17 a referendum was held on “preserving the USSR” with a very vague wording of the question, and already on March 21 1991, the Supreme Soviet of the USSR issued a decree that casually stated: “For the preservation of the Union of Soviet Socialist Republics were in favor ... 76% of voters. Thus, the position on the preservation of the USSR on the basis of democratic transformations was supported. ” Consequently, "the state bodies of the USSR and the republics (should) be guided by the decision of the people ... in support of the renewed (!) Union of Soviet Socialist Republics." On this basis, the President of the USSR is recommended to “work more energetically towards the completion of work on a new Union treaty in order to sign it as soon as possible.”

Thus, the new Union Treaty and the strange formation of the VAC by means of simple manipulations were legitimized through the referendum of the 1991 of the year.

The signing of the new Union Treaty was thwarted by the August coup of 1991. It is characteristic that in his address to the people, speaking of some forces (but not naming them directly), who set the course for the collapse of the country, the Emergency Committee opposed them with the results of the March referendum "on the preservation of the USSR". That is, even high-ranking government officials did not penetrate into the essence of the multi-way manipulation that had happened before their eyes.
After the failure of the coup, Gorbachev prepared a new draft of the Union Treaty - even more radical, already about a confederation of states - former Soviet republics. But its signing was thwarted by local elites, who were tired of waiting, and behind Gorbachev’s back, disbanded the USSR in Belovezhskaya Pushcha. However, it is enough to look at the text of the treaty, on which the president of the USSR worked, in order to understand that he was preparing us all the same CIS.

In December, the 1991 of the year in Ukraine passed another referendum - already on independence. 90% of those who took part in the voting were in favor of “independence”. Today, a shocking video of that time is available on the Web - journalists interview Kiev residents at the exit from polling stations. The people who have just voted for the collapse of the country are fully confident that they will still live in a single Union, with common production and economic ties and a single army. "Independence" was perceived as a kind of eccentricity of power. Absolutely paternalistic citizens of the disintegrated USSR believed that the leadership knew what it was doing. Well, for some reason, he wanted to hold several referendums (in a country democratization, maybe it’s really necessary?), We don’t feel sorry, we will vote. In general (and on this score there was iron confidence) nothing fundamentally changes ...

It took many years to treat this ultrapatternalism and an extremely distant view of politics through a lot of blood.

Surrealism of what is happening is confusing not only ordinary people. After the formalization of the dissolution of the Soviet Union and Mikhail Gorbachev’s resignation, the leadership of a number of republics was still awaiting instructions from Moscow. And it was extremely puzzled that such instructions were not received, interrupting phones in an attempt to contact the no longer existing Allied center.
Much later, in 1996, the State Duma of the Russian Federation adopted a resolution “On the legal force for the Russian Federation - Russia of the results of the USSR referendum 17 of March 1991 on the issue of preserving the USSR”. And since there was no other referendum on this issue, it declared illegal the decree of the Supreme Soviet of the RSFSR of 1991 of the year “On Denunciation of the Treaty on the Establishment of the USSR” and legally recognized the USSR as an existing political entity.

That is, even the deputies of the Russian State Duma, five years after the referendum, still believed that it was “about preserving the USSR”. That, as we have seen at least from the wording of the question, does not correspond to reality. The referendum was about reformatting the country.

This, however, does not completely abolish the paradoxical fact that people - citizens of the country, in spite of everything, without delving into the wording, voted precisely for the preservation of the Union of Soviet Socialist Republics. That's just all 112 million voted subsequently cynically deceived.

Ctrl Enter
Noticed oshЫbku Highlight text and press. Ctrl + Enter
We are
The collapse of the Soviet Union
Military Reviewin Yandex News
Military Reviewin Google News
100 comments
Information
Dear reader, to leave comments on the publication, you must sign in.