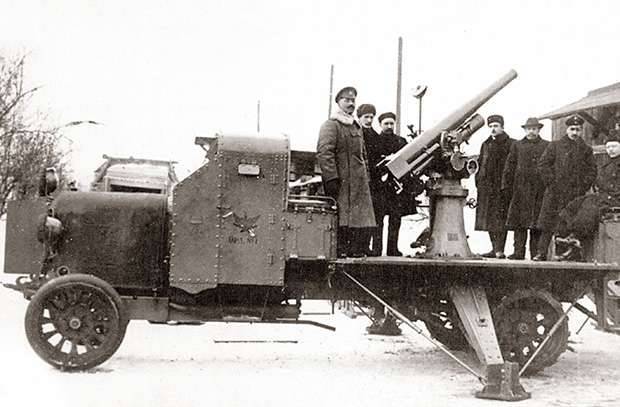 March 18, 1915 the first-born of the Russian air defense was formed - A separate car battery for firing at aerial the fleet
The phrase "anti-aircraft artillery" seems to us so well-established today that it is not difficult for a non-specialist to make a mistake, believing that this type of guns already exists far from the first century. Meanwhile, Russian anti-aircraft guns only last year celebrated their centenary. This is not surprising, considering that the first aircraft - that is, the first target for this type of artillery - took off only December 17 1903 of the year. And the first specialized anti-aircraft unit in Russia was born 18 (5 old style) March 1915. It was a separate car battery for firing at an air fleet, armed with four anti-aircraft guns of the 1914 model of the year, mounted on the chassis of the Russo-Balt trucks.

Despite the fact that the first planes began timid flights only at the very beginning of the twentieth century, the development aviation It went so fast that by the start of World War I it had firmly become part of the armed forces of all the major belligerent powers. And the first place among them belonged to Russia: it had 263 aircraft in operation, including 4 unique multi-engine long-range bomber Ilya Muromets, and left behind all allies and opponents. Having such a large air fleet, the Russian Empire was aware that for anything weapon there is a shield - and led his development.

The Russian military was well aware of the work being done on pro-aircraft artillery abroad. The Germans and the French achieved the greatest success in this area by 1910, who were able to adapt the medium-caliber guns, 47 mm and 72 mm, which are in service with the guns for firing at air targets. It was known in Russia that from the first days they tried to make the antiaircraft artillery as mobile as possible, for which they place the guns on the car chassis, and they try to book cars to secure the personnel.

This approach was completely logical, and it is not surprising that Russia took the same path. Actually, anti-aircraft artillery in our country was engaged in the 1901 year, when captain Mikhail Rosenberg presented the draft of his 57-millimeter anti-aerostated gun. He was rejected because back in 1890, the experience of using a regular 76-millimeter cannon for air targets was obtained on tests - and this experience was considered successful. But as aircraft developed, it became obvious that the speed of airplanes would be much higher than the speed of balloons and airships, and therefore field guns, even if they were specially trained in calculations, could not cope with them. And therefore, in 1908, an initiative group of officers - students and teachers of the Officer Artillery School in Tsarskoye Selo - began developing the anti-aircraft gun itself.

The captain Vladimir Tarnovsky, a graduate of the Mikhailovsky Artillery School, who became a student of the Tsarskoye Selo art school a year earlier, became the center and soul of this group. In 1909, he, who had already managed to prove himself as a competent innovator, graduated from school and remained there as a teacher. And, not looking up from the training of new listeners, he worked with might and main on the creation of the first Russian anti-aircraft gun. The basis for this gun was taken light 76,2 mm field gun model 1902, which was to be equipped with a new semi-automatic shutter and an independent line of sight, as well as a machine that allows you to lift the barrel almost vertically. The main work on the new gun was carried out at Putilovsky Zavod under the guidance of engineer Franz Lender, and the Officer School was actively involved in the development.

Since the creation of a new type of guns required a new theory of shooting, and new machines, and new structural elements, work on it stretched out for several years. But this allowed staff captain Tarnovsky to simultaneously master the idea of ​​placing anti-aircraft guns on a moving chassis. In 1912, in the third issue of the magazine, published in the Officer Artillery School, he published a technical project of this type of anti-aircraft gun, and then turned with his proposal directly to the Society of Putilov factories, asking him to support it with technical and technological knowledge. In 1913, the project of the first anti-aircraft cannon in Russia, and immediately with the possibility of its installation in a stationary position, as well as on a mobile road or railway platform, was approved by the Main Artillery Directorate. In June, the 1914-th Putilovskiye Plants received an order for the first 12 guns, which were officially called the “three-inch anti-aerostat gun” arr. 1914 of the Putilovsky plant on an automobile installation ", and in everyday life -" the Tarnovsky-Lender cannon of the 1914 model of the year ", and in August their assembly began. 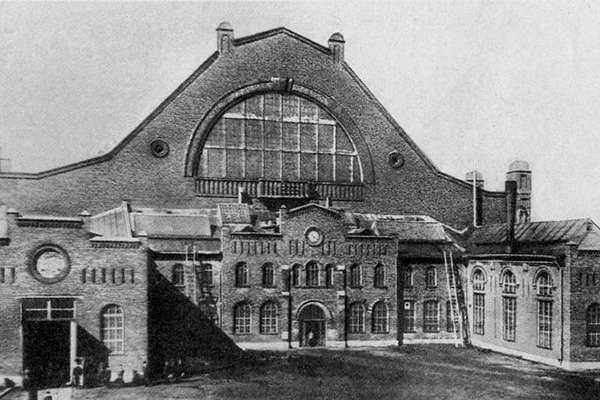 Kirovsky Plant (formerly Putilovsky Plant, “Red Putilovets”). Photo: putilov.atwp.ru
While the Putilov workers assembled the first anti-aircraft guns, and the Russian-Baltic Carriage Works, the vehicles on which they were to be installed, other batteries were sent to the front, designed to fight airplanes. They were equipped with 75-millimeter sea and 76-millimeter field guns, which were not very suitable for anti-aircraft fire, four in each battery. In total, three such batteries were formed in Kronstadt and sent to Warsaw to defend the Warsaw Fortress.

Meanwhile, work on the first Tarnovsky-Lender anti-aircraft guns was coming to an end. The first four guns were assembled at the end of 1914 of the year and installed on the five-ton cars Russo-Balt T 40 / 65, with which the body and the cabin were partially reserved at the Putilov factories. But even before the end of this work, 18 (5) in October 1914, the Military Council under the Minister of War approved the staff of the Separate car battery for firing at the air fleet and determined to “form (by the said staff and calculate the number of ranks of the wartime battery) one car battery and contain her for the whole time of the real war. ” In a completely natural way, the first commander of the first specialized anti-aircraft unit in Russia was appointed to be the person who made every effort for its appearance: the staff captain Vladimir Tarnovsky. The ministry justified this decision by the necessity of “further improving the system on the basis of combat experience.”

19 March 1915, in the midst of hostilities, staff captain Tarnovsky reported that the battery can be considered formed: “This March 5 from the Putilov factory 4 installed on the aircraft fleet vehicles. These guns have already been tested at the main artillery firing range for shooting and the tests went well. Speaking of this, I ask you to give the order for the school and to report to the General Directorate of the General Staff that:

1) the battery should be considered formed by 5 on this March;

2) landing on the railway to perform at the theater of military operations can be made 10 of this March;

3) that for loading the battery, rolling stock will be required, consisting of: one class I or II class car, two heat cabs on the number of 78 lower ranks, 12 platforms on the number of 12 cars and one covered freight car for motorcycles and luggage, total 16 cars and platforms .

The composition of the echelon: 3 officer, 1 class rank, 78 lower ranks, 12 cars and 4 motorcycle.

It is necessary to clarify that, in addition to the four actual artillery vehicles on which the Tarnovsky-Lender anti-aircraft guns were installed, the battery received four partially armored vehicles - charging boxes, which were played by three-tonne trucks Russo-Balt M 24 / 40, as well as three passenger cars for officers and communication teams and a kitchen-zahhgauz car chassis. Four of the same motorcycle designed for intelligence.

In this composition, the first in Russia Separate car batteries for firing at the 2 air fleet of April (March 20) of the Year 1915 departed to the North-Western Front. She won her first victory on June 12 (May 30) 1915 of the year in the Polish city of Pultusk, when she managed to hit a German airplane with a shrapnel shell that had fallen behind Russian positions. And the total battery score of the battery, which 4 November (22 of October) 1915, received a new name - 1-I separate car batteries for firing at the air fleet (due to the fact that the same order of the Chief of Staff No. 172 formed the second similar battery; in total, nine anti-aircraft batteries were created and fought during the First World War, reached a dozen enemy aircraft, and these are only those whose fall was obtained reliable data.

Ctrl Enter
Noticed oshЫbku Highlight text and press. Ctrl + Enter
We are
The development of the military-industrial complex of the Russian Empire in the years of WWIRussian armored cars (Part 2) "Russian child"
Military Reviewin Yandex News
Military Reviewin Google News
11 comments
Information
Dear reader, to leave comments on the publication, you must sign in.