President Vladimir Putin met with servicemen who were carrying out an antiterrorist mission in Syria. Award List

March 17 2016
33
Russian President Vladimir Putin met with military personnel who took part in the counterterrorist operation in Syria. The Supreme Commander-in-Chief of the Armed Forces of the Russian Federation expressed gratitude to the servicemen for their military work, which allowed them to achieve success in combating international terrorism and help the political forces of the SAR to sit at the negotiating table. From the speech of the President of the Russian Federation:

Special words of gratitude - to military women. On a par with men with steadfastness and dignity, you are in a difficult service. Your choice of profession and life path causes great respect.

Thank you all for your dedication to the Fatherland. 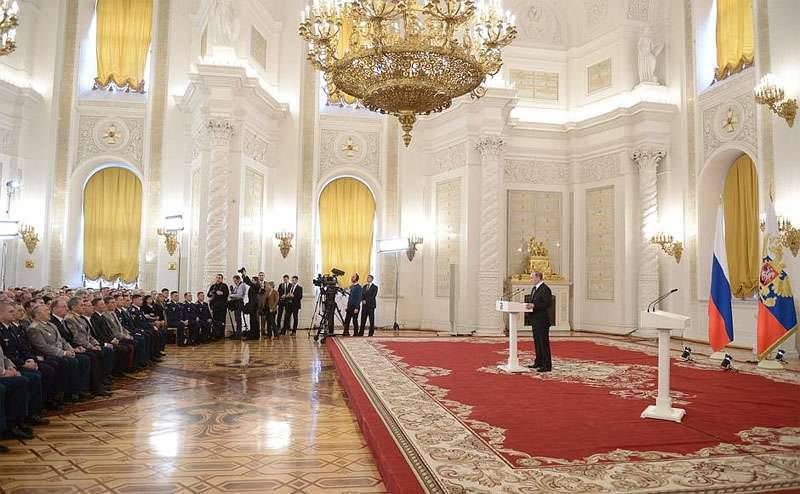 Vladimir Putin noted the importance of Russia's contribution to the peace process in Syria, in establishing an active dialogue to resolve the Syrian crisis. At the same time, the president said that Russia would continue to closely monitor ceasefire violations, and also outlined the tasks of the remaining contingent in the SAR:

First of all, this is control over the observance of a truce, the creation of conditions for a political intra Syrian dialogue.
Our bases in Syria - Tartus and Hamim - whose personnel will continue to serve here, are reliably protected from land, sea and air. All components of the deployed air defense system, including the Pantsir short-range and Triumph C-400 short-range complexes, will be on permanent combat duty.

I note that we have largely restored the potential of Syrian air defense. All interested parties are warned and aware of all this. We proceed from the fundamental international norms: no one has the right to violate the airspace of a sovereign country, in this case Syria.

We have created and effectively operate a mechanism to prevent incidents in the air with the American side, but all partners have been warned and know that our air defense systems will be used for any purposes that we consider to be a threat to Russian military personnel. I want to emphasize: for any purpose.

Of course, we will continue to support the legitimate government of Syria. It is comprehensive. This is financial assistance, the supply of equipment and weapons, assistance in training, organizing and coordinating the Syrian armed forces, this is intelligence support, staff assistance in planning operations. And finally, this is immediate, direct support. I mean the use of space grouping, strike and fighter aviation. Those Russian forces that remain in Syria are enough to solve the tasks.

We will continue to assist the Syrian army and the authorities in their fight against the so-called "Islamic State" and "Jabhat al-Nusra", other terrorist groups, recognized as I said, by those of the UN Security Council. Our uncompromising attitude towards terrorists has not changed.
What will be the balance of power, given the reduction of the Russian group? Balance will be provided.

He called Vladimir Putin and the approximate amount that had to be paid from the budget of the Russian Federation for the Syrian operation. This is 33 billion rubles. And according to the president, the allocation of these funds in the budget was envisaged.

The president:
Of course, the military operation in Syria demanded certain expenses, but the main part of them was the resources of the Ministry of Defense, the money of the Ministry of Defense. About 33 billions of rubles had previously been budgeted for the Ministry of 2015, for training and combat training. We simply redirected these resources to ensure the grouping in Syria, and no one has yet invented a more effective way of preparing, honing military skills than actual combat operations. And in this sense it is better to use, expend, waste motor life and ammunition in battle than at the training ground. And you professionals understand it like no other.

However, according to the president, a great loss is our comrades.

Владимир Путин:
The price is not easy, and now I will not talk about money. Here, in this hall, Elena Yurievna Peshkova, Valentina Mikhailovna Cheremisina, Irina Vladimirovna Pozynic and Yulia Igorevna Zhuravleva, the widows of our comrades who died fighting terrorists. I understand that for relatives, relatives, friends, comrades of Oleg, Ivan, Alexander, Fyodor, their departure is an irreparable loss. We all see what happened as personal grief. Therefore, he named your husbands, fathers, sons by name. And not as the Supreme Commander or President, but as a citizen of Russia who is grateful and grieving for these losses. Our comrades to the end remained loyal to the oath and military duty. We will remember their courage and nobility, that they were real men and brave fighters.

After his speech, the President of Russia presented awards to servicemen who carried out an anti-terrorist mission in Syria.

NAME OF HERO OF THE RUSSIAN FEDERATION

BAIKULOV Vadim Vladimirovich - Colonel, Officer of the Main Directorate of the General Staff of the RF Armed Forces

Andrei Alexandrovich Dyachenko - Major, Deputy Commander of the 47 Aviation Squadron of the 105 Mixed Aviation Regiment of the 6 Guards Mixed Aviation Division of the Air Force and Air Defense Army

THE ORDER "FOR MERITS BEFORE THE FATHERLAND" IV DEGREE

Andrey Zakharov - Major, 47 Navigator of the 105 Mixed Aviation Regiment of the 6 Guards Mixed Aviation Division of the Air Force and Air Defense Army

Zhdanov Vitaly Yuryevich - Colonel, Head of Operations Division - Deputy Chief of Staff of the Directorate of the 41 Combined Arms Army

KANORSKY Anton Pavlovich - Major, commander of the 120 aviation unit of a separate mixed 11 aviation regiment of the Air Force and Air Defense Army

Tsvetkov Sergey Vladimirovich - captain, senior pilot of the aviation link of the aviation squadron (on Su-24) 98 of a separate mixed aviation regiment 45 of the army of the Air Force and Air Defense

MEDAL OF THE ORDER "FOR MERITS BEFORE MOTHERLAND" II DEGREE

ADAMSKY Andrey Vladimirovich - Captain of the 2 rank, commander of a large submarine "Rostov-on-Don" of the Novorossiysk naval base of the Black Sea Fleet

Andrei Vladimirovich PODOLSKY - Captain, Deputy Commander of the Howitzer Artillery Division 120 of the 41 Artillery Brigade of the Combined Arms Army.

Ctrl Enter
Noticed oshЫbku Highlight text and press. Ctrl + Enter
We are
The action “Military service under the contract is your choice!” In Rostov-on-Don: future contract servicemen, exhibitions and “Russian Knights”
Military Reviewin Yandex News
Military Reviewin Google News
33 comments
Information
Dear reader, to leave comments on the publication, you must sign in.