Death of the Cathars (part of 2)

March 25 2016
22
The army was led by Count Simon de Montfort, who had already participated in the fourth crusade in 1204. The Count of Toulouse also prudently took part in it, which provided his lands with immunity from the forces of the Crusaders. However, he did not bring his squad to them and led the crusaders in the territories of their vassals, in every way avoiding direct participation in hostilities. Finally, the troops reached the feast of Tranquel, and the young viscount, and the count's nephew of Toulouse had to unwillingly lead the resistance of the invaders from the north, even if they spoke under the banner of the cross, and he was an exemplary Catholic. That is, the overlord should have defended his vassals at any cost, otherwise he risked his knightly honor. This is how the Provencal poet Guillaume de Tüdel described his position, in 1210, he composed a song about the Albigensian crusade:


"Viscount thinks day and night
About how to protect the edges of the family,
There is no brave knight than him.
The nephew of the count, the son of his sister,
Catholic he is exemplary - it can
You confirm priests who
He provided selfless shelter.
But in his youth, the Viscount cared.
About those to whom he was then a seigneur,
And who trusted him, and he
It seemed to them a worthy companion.
One sinned loyal vassals -
Heretics implicit encouragement. "

Here they are the “God warriors” from the north, who came to rob and destroy the rich culture of the blessed south of France! Such they saw the director and costume designer of the Soviet detective story “Casket Maria Medici”.

When the army of the Crusaders arrived, the first in their way was the city of Beziers, which refused to give out its heretics and was captured as a result of a surprise attack. The gates of the fortress were attacked by knightly servants in the army, who organized a real massacre in the city, as a result of which on July 22 almost the entire population of the city perished. The papal legate, Abbot Arnold Amalric, in his message to the pope, wrote about all this as follows: “... while the barons conferred on what tricks to use in order to bring Catholics, servants and other people of low rank from the city, and some even weapons, attacked the city, without waiting for the orders of the leaders ... shouting "To arms, to arms!" They crossed the moat, climbed over the walls, and Bezier was taken. They did not spare anyone, they all betrayed the sword, almost 20 000 people, and did not give mercy to either San, or age, or sex. After this massacre the city was plundered and burned. Thus God's punishment was miraculously realized ... ”. The news of the terrible fate of Beziers quickly spread, and subsequently many of the fortifications of the Cathars surrendered without any resistance. By the way, it was then that, as they say, the well-known phrase was uttered - “Kill everyone, God recognizes his own people!”, Which, presumably, Arnold Amalric himself said.

Then came the turn of the fortress of Carcassonne, which was considered impregnable, to which the Crusaders approached on July 28, that is, in the very summer heat. Already on the third day of the siege, they seized the first suburb and cut off the town’s exit to the river. Then they attacked the second suburb, which was much better protected, and were forced to retreat. At the same time, they actively used various trebleyus, and continuously threw the city with stones and various rotten stuff, and their diggers, under a hail of stones and logs, dug under the wall of a tunnel.

The next day, early in the morning of August 8, the wall at the site of the tunnel collapsed, and the Crusaders approached the ancient fortress wall erected during Roman rule and then fortified by Count Trankawel. Guillaume de Tüdel then writes about these days:

"Fearless fighters fight,
Enemy their arrows aptly hit,
And in every camp there are many deaths. ”

According to him, if it were not for so many newcomers from the whole region, this fortress, which had both high towers and strong battlements, would never have been taken so quickly. But there was no water in the city, at that time there was an exhausting heat, which caused epidemics, and the meat of animals that did not have time to salt, began to rot, there was a lot of flies around, and the inhabitants of the besieged city were horrified. However, the crusaders, rightly fearing a fire in the city, decided to begin negotiations. It is possible that, having believed the word given to them, Count Trankawel agreed to come to the camp of the Crusaders for negotiations, and there he was cunningly captured by them. It happened 15 August 1209 of the year. After that, the city capitulated, and its residents were forced to flee from Carcassonne "in some shirts and pants," taking nothing with them. Tranquel died in the chamber of one of the towers of his own castle 10 in November. It is possible that he simply fell ill and died, because the conditions of detention of prisoners at that time were simply disgusting. 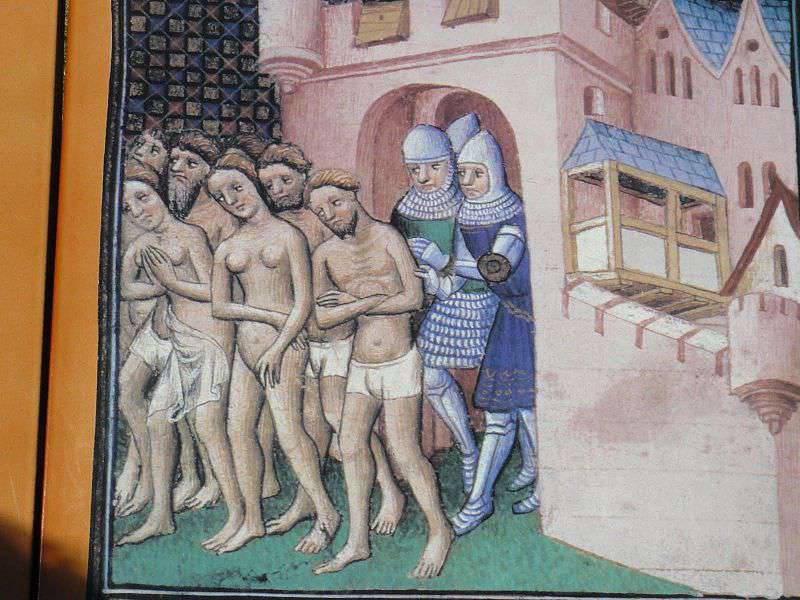 The expulsion of the Cathars from Carcassonne to 1209. They were lucky that, after stripping them naked, the Crusaders did not kill them! "Big Chronicle of France", about 1415, the British Library.

The Council of the Crusaders handed over to Count Simon de Montfort of Carcassonne and all the feuds of Tranqualel, who were still to be conquered. Guillaume de Tüdel reports that the Comte de Montfort did not know what to do, since most of the seniors did not want to continue the crusade to die in the enemy’s land during the siege of neighboring castles, where the most stubborn of the local seniors were hiding. It seems that the Crusaders did not consider it too righteous to kill more Christians than heretics. They did not have the slightest desire to seize the lands of the Occitan knights, and therefore they did not intend to extend the forty-day campaign, for which all the crusaders were promised absolution, although they certainly were very, very pleased with the opportunity to plunder rich Languedoc! 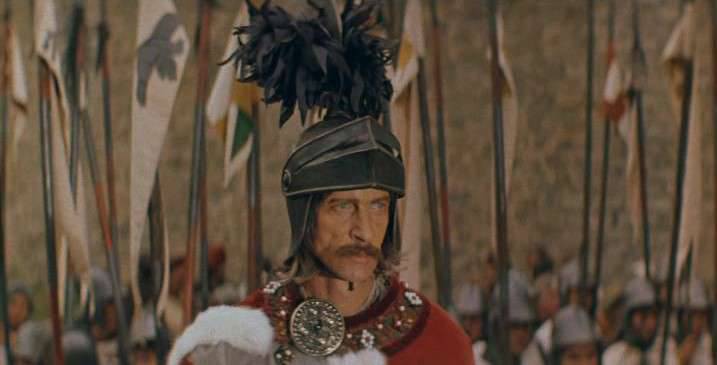 The head of the crusaders Simon de Montfort. So it is shown in the Soviet film "Casket of Maria Medici." The film itself is well shot. But ... well, why was he wearing a helmet with a visor, because it happens in 1217 year!

However, even after the 1209 year, the war in the south of France did not last for one year, but went on, then fading, then rising again, for several decades. For example, in 1215, the Crusaders captured Toulouse, also transferred to Simon de Montfort, but in 1217, Count Raymond VII recaptured it. Simon de Montfort himself began a new siege a year later and was killed by a stone stone thrower, who, according to legend, was ruled by the women of the city. And Guillaume de Tüdel wrote about his death:

“While Simon mourned and spoke with his brother,
Toulouse is a powerful stone thrower that a carpenter made,
Installed on the wall in order to conduct shelling,
And the stone, describing the arc, flew over the meadow,
There, hitting and pleasing where God himself commanded.
Flint, striking straight into the helmet, Simon knocked down,
On the part of the jaw blew the skull and cut
That stone struck the count so that the graph turned black.
And immediately this knight went to death in inheritance ...
This is the brutal Earl of Montfort that was bloodthirsty,
As a non-Christ, he was stoned with a stone and gave up his spirit.
(Translated by B. Karpov)

However, the campaign followed the campaign further, only now the kings of France took over the leadership and managed to figure out which tidbit the lands of Southern France represented. But only in the 1244 year - and then, only nine months after the beginning of the siege, did the last stronghold of the Cathars fall - the Castle of Montsegur, and in the 1255 - the last stronghold of their open resistance - the castle of Keribius in the Corbières. Accordingly, in all the cities and castles taken by the crusaders, the Cathars either returned to the bosom of the Catholic Church forcibly, or if they refused to do it or did, but did not pass the test of killing a living creature, for example, dogs, they were burned at the stake. The last Cathars of Languedoc hid in caves until the 1330 year, when their refuge was opened. The inquisitor Jacques Fournier, who came to the papal throne five years later under the name of Benedict XII, ordered that they be immured there alive. The last Cathars found refuge in the mountains of Italy. However, in 1412, they were also tracked there, and they were all killed. 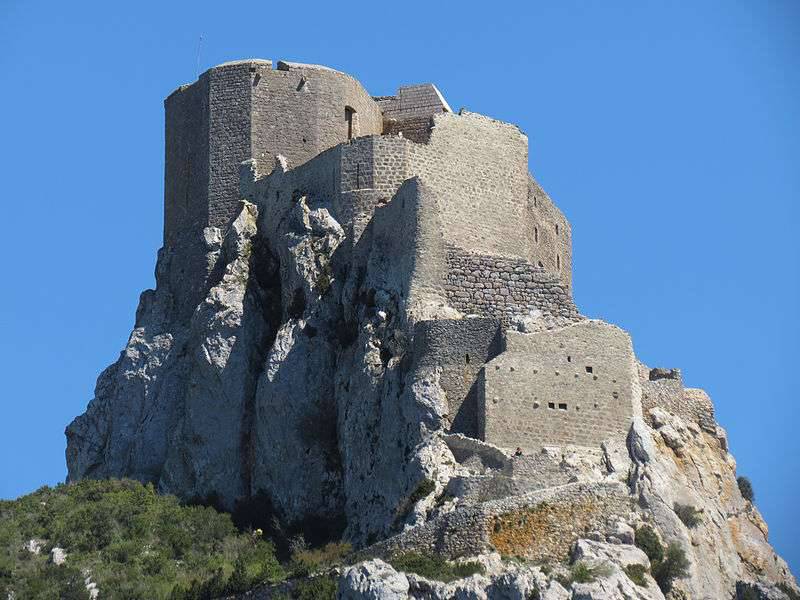 Keribus Castle in the mountains of Corbières. Looking at this structure, as if constituting one whole with the rock, well preserved even today, it seems generally incomprehensible how such a fortification can be seized. But ... here somehow captured.

In spite of everything, some of them still managed to escape, after which they settled in the Balkans, and in particular in Bosnia. Moreover, their sect remained here until the middle of the XV century and the arrival of the Turkish conquerors. The last one didn’t care what doctrines their Christian subjects adhere to, so long as they don’t start a confusion. In this calm environment, the Cathar sect died of its own accord. Many of its members voluntarily converted to Islam. So among the Bosnian Muslims, participants in the recent Balkan War, there were also descendants of the Cathars - the very people who, long before the Reformation, had barely managed to rebuild the Catholic Church on completely new principles. 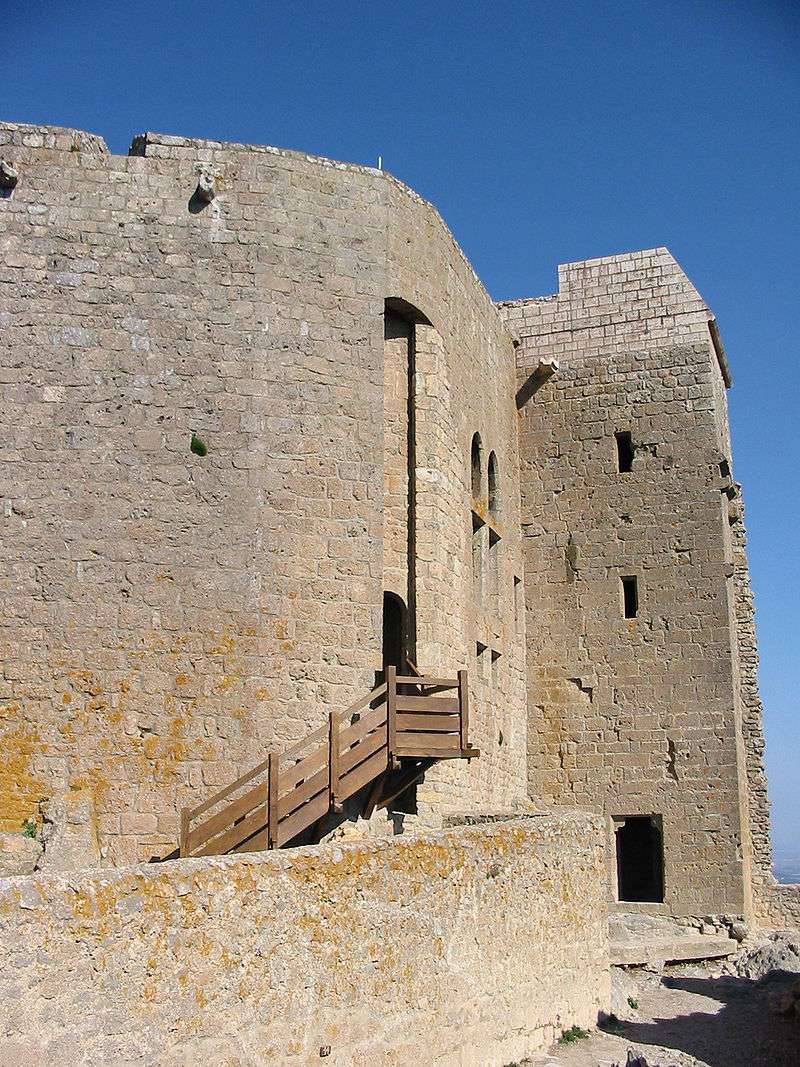 Donjon castle Keribus and the entrance to it.

Yes, nothing to say, good deeds were done in that era in the name of the Lord. And it remains only to be surprised at the spiritual stability of people of that distant time, who, even after all these horrors, found in themselves the strength and courage to adhere to that belief, which they considered the only correct one, first of all, for the inherent humanism!

By the way, it is interesting to note that by order of the church authorities, penitent Cathari had to wear a yellow Latin cross on their clothes, so that to some extent they also became “crusaders” ...