March 18 2016
263
From January 2015 to January 2016, Russia increased its investment in US government securities by 14,7 billion dollars (from 82,2 billion to 96,9 billion dollars). This was reported in the January report of the US Treasury Department on other countries investing funds in US government bonds. Russia ranks fifteenth in the list of US securities holders. The number one investor is China. 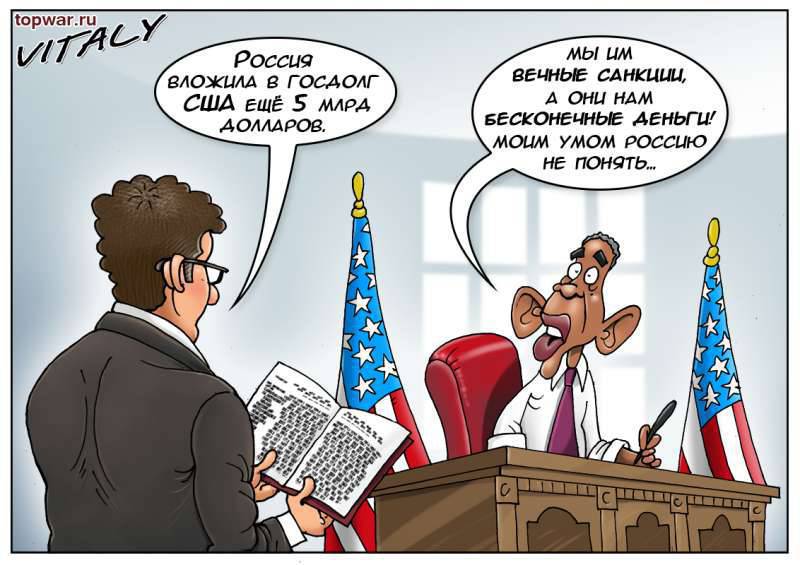 It is noted that Russian investments in American securities began to decline since December 2014, but the trend reversed in May 2015, when the corresponding figure rose from April 66,5 billion dollars to 70,6 billion dollars.

TASS recalls that Russia occupies 15-place in the common list of creditors of the United States. China remains the main holder of US government securities. In January, 2016, its investments reached 1,237 trillion. dollars. In second place - Japan (1,123 trillion. dollars).

Readers of the Military Review are often wondering: why is the Russian Central Bank investing in a foreign economy, and even a “hostile” pressure on Russia with sanctions? Why not spend this money on the development of its own industry? Some people see in these actions of the Central Bank the intrigues of the “fifth column” and “enemies of the people” and wonder: why does Putin not see all this? And if he sees, why is he "satisfied" with the work of the Central Bank, and in general, the economic bloc of the government?

Different politicians are asking the same questions, which, however, are not limited to online forums, but begin to give instructions to the Central Bank and the Kremlin and pave the way for a bright future for the people. On this path, the Liberal Democratic Party, the Communists, and smaller forces, who also want to draw attention to themselves, have already become familiar. In principle, at their core, many of the statements of these home-grown advisers are nothing but attempts at self-promotion that do not lead to any changes. By changing the policy of the Central Bank of these "tips" certainly will not.

A month ago, in February 2016, the LDPR faction in the State Duma appealed to the leadership of the Central Bank of the Russian Federation to clarify the policy of purchasing US government bonds.

Eldepair people think that by investing money in US government bonds, the Central Bank supports the American economy. Consequently, the leadership of the Bank of Russia must appear at a meeting in the State Duma and explain the meaning of their actions. About this, as reported RIA News", declared at the plenary meeting, the deputy from the LDPR Alexander Starovoytov.

According to him, in December 2015, compared with November, Russia increased its investment in US government bonds by 4,6% (up to 92,1 billion dollars). “In November, this happened in the amount of 6 billion dollars. Probably, for some, these are empty numbers, but a small comparison: these amounts for two months are equivalent to the planned expenses of the state to support the economy of the Russian Federation for the entire 2016 year. In particular, by 30% this exceeds the state’s annual expenditures on education, by 54% it exceeds the state’s annual expenditures on health care and by five and a half times the amount spent on housing and public utilities, the parliamentarian said. - What is this action by the Central Bank? Maybe this is a tricky economic trick, maybe they really have the information that it will bring a substantial profit to the country? ”

“The LDPR faction nevertheless insists on reminding the Central Bank that after all this is not some kind of private commercial shop and that decisions of this kind and level are also of a political nature. We insist that in the near future, in the coming days or at least a week, the leadership of the Central Bank will come to the State Duma and tell us about its serious economic plan to support the US economy, ”Mr. Starovoytov demanded.

Earlier, January 26, online "RIA News" it was reported that the Communist Party deputies called for abandoning the purchase of US government bonds.

The communists recalled that in November 2015, when Russia acquired US bonds worth 6 billion, was working on a law on the federal budget for 2016 year, which “provides for an unacceptable reduction in a number of key expenditure items”: health care costs are reduced in nominal terms by 8%, by education - by 8,5% (compared to 2015 year).

"The meaning of our proposal can be expressed in three simple words:" Enough to feed Kansas! "- said the RIA"News»Secretary of the Communist Party Central Committee Obukhov. - The government is outraged by the fact that the United States imposes endless anti-Russian sanctions, but at the same time continues to invest budget funds in their securities. Such a policy clearly does not fit with the application of Russia for genuine sovereignty: if your money is placed in the US, then what kind of independence can we talk about? Moreover, in the event of an exacerbation of the situation, these funds can always freeze. ”

So, the Communist Party of the Russian Federation and the Liberal Democratic Party tried on clothes of people's guardians and severely criticized the ideas of the Central Bank and the Russian government in general. No wonder the letter of the Communists went to Medvedev.

How do experts explain this policy of the Central Bank?

“The risk of losing money invested in US Treasury bonds certainly exists,” said "Free Press" Public Relations Director of the Kalita-Finance Financial Group, Alexey Vyazovsky. - In case of tightening of Western sanctions, everything can go according to the Iranian scenario, when the USA arrested all the assets of the Iranian Central Bank. In Europe, financial investments have also been frozen for decades. ”

According to a financial expert, this risk is also considered in the Russian government - “as quite real”, although “they do not advertise it”. “Last year,” the expert recalled, “the financial management of Russia was trying to do something, to get away from this dependence — the gold reserves in the country were increased to record levels.” But then oil prices rose a bit, a stream of foreign exchange earnings went into the country, and the government "did not think of anything better than how to invest it in US bonds."

“The fact is that inside the country they simply do not know where to invest this money. For example, out of 90 billions of dollars invested in US public debt, a third is derived and invested in the purchase of gold. This will immediately cause a serious increase in gold prices.

Only by this I can explain this strange behavior of our authorities. Because, based on normal logic, we must minimize our dependence on the financial systems of those countries that impose sanctions against Russia as much as possible. ”

Dmitry Abzalov, President of the Center for Strategic Communications, expressed his opinion on the “arrest” and “freezing” in an interview with “SP”.

“The risk of losing money invested in Tresuries is small,” he noted. - This system is so arranged that it is very difficult to freeze the assets of one of the depositing countries so that the assets of others do not suffer. And if China, the largest contributor to US Treasury bonds, starts to withdraw it because of the threat of losing money, this is fraught with the collapse of the entire US financial system. ”

To the question of the correspondent, “But did Iran’s investments freeze at one time?” The expert answered: “Nothing of the kind. Frozen assets. And investing in US Treasury bonds is very difficult to freeze. ”

According to the expert, in Russia it is necessary to create financial instruments and to invest normally in our economy, in infrastructure projects. If, however, we finance them directly, “there may be big costs,” namely, the “corruption component”. “If the funds will be allocated just for the state-owned company, then it is likely that the money, let's say, will be spent inefficiently,” the expert gently remarked.

We can assume, let us add, that the state is afraid of corruption ... in the state. Fearing himself, the state invests currency in a foreign economy, and invests so that the risk is minimal. Therefore, the American economy is elected - the most transparent.

In addition, the US paper has the highest degree of reliability.

US state bonds are the most common tool for the formation of foreign exchange reserves worldwide, said Artem Zvyagilsky, a leading analyst at MFX Broker. They are nominated in the main currency of international payments, have high reliability and liquidity, leads his words Utro.ru.

“According to the criterion of reliability - the yield is better than the US government’s state securities for placing large reserves is difficult to find,” Sergey Hestanov, associate professor of the Department of Stock Markets and Financial Engineering of the Faculty of Finance and Banking of the Russian Academy of National Economy and Public Services, confirms this view.

In addition, taking into account the global trend for the growth of the dollar against other currencies, the purchase of US bonds is an absolutely reasonable step, believes Pavel Khoroshilov, leading specialist of the department for attracting and allocating resources to Alor Broker.

American public debt is one of the most reliable financial instruments, which simply have no alternatives, said Vladislav Kochetkov, president of the Finam investment holding. “Of course, the Russian government, based on a conservative investment strategy, has placed its reserves in US bonds, bonds, for many years in a row,” the expert said Reedus.

Buying American bonds, Russia lends America and “holds on a hook” the strongest economy in the world. In addition, Russia receives a fixed income in foreign currency. “Thus, Russia not only maintains its own foreign exchange reserves, but also increases them,” Kochetkov summarizes.

So, we note in conclusion that the basis for the relevant decisions of the Central Bank is the reliability and liquidity of American securities. Apparently, this is well understood, not only in Russia, but also in China, and in Japan, whose investments in US government bonds exceed a trillion.

Moscow’s investment of currency in the home economy will most likely lead to a new round of corruption, rather than to the development of domestic economy and industry. At least some experts think so.

So, we continue to finance the development of the US economy. God help you, Mr. Obama!