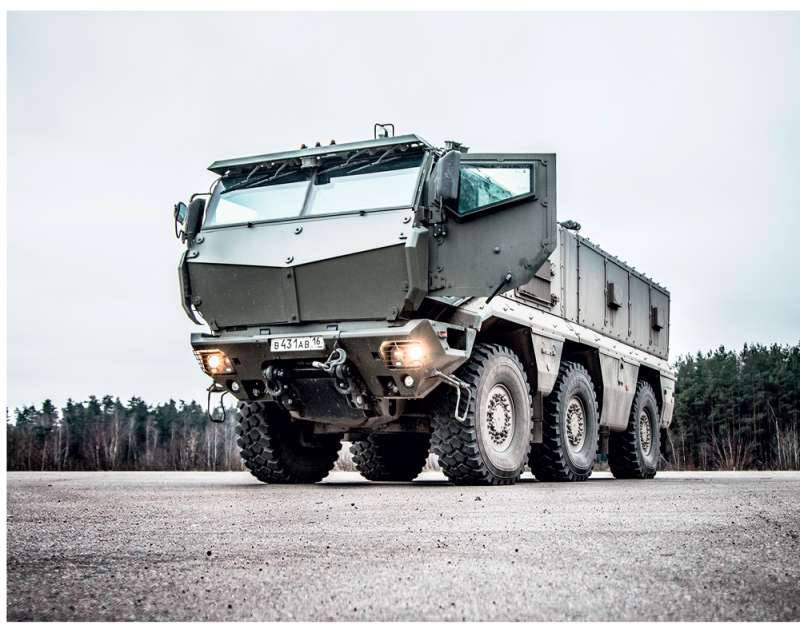 We didn't have to wait long. A few minutes later, KamAZ-63968, aka Typhoon-K, drove to the site in person. The angular shapes of this armored vehicle at first made it possible to suspect a "shushpanzer" in it - so on the militaryhistorical resources are called all sorts of homemade armored vehicles. But no, we have a modern, skillful, technological and, it seems, a rather expensive car. 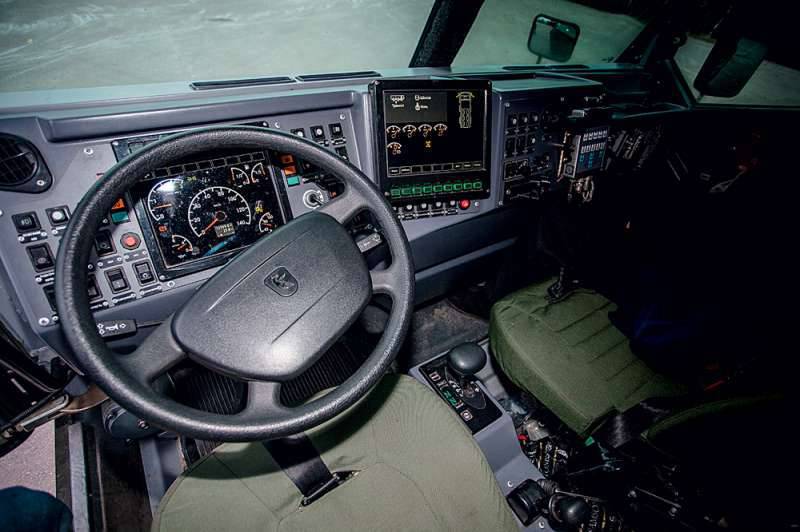 Comfort zone
"Typhoon-K" is saturated with modern technology and provides the military with a high level of comfort. It is not necessary to freeze in the cold, nor to choke in the heat: there are both heaters and air conditioning on board.
In the conditions of modern conflicts, when the solid front line is absent and the tactics of sabotage and ambush are widely used, danger lurks anywhere. The personnel on the march must be defended seriously. Some time ago, our army tried to strengthen the protection of the usual "Urals", which were traditionally transported soldiers. But it turned out that these cars do not “pull” the reservation. And in 2010, it was decided to develop completely new automotive platforms. Already at the anniversary Victory Parade last year, the Typhoon-K rolled through Red Square.

These cars are new to us, but in other countries MRAP armored cars have been around for a relatively long time. MRAP is an English abbreviation for "mine protection, counter ambush". Actually, that’s what it says. "Typhoon-K" - put on a three-axle chassis (formula 6 x 6) a two-part structure consisting of a driver's cabin and a functional module for transported personnel (landing force). The machine has a circular bulletproof reservation (a combination of ceramic and steel armor), allowing at least to withstand shots of armor-piercing bullets of caliber 7,62 mm. The machine will not be fatally damaged by a mine exploded under the bottom with TNT equivalent up to 6 kg - mine protection is formed by a V-shaped bottom, special wheels with explosion-proof inserts and a design of the seats that compensates for the effects of overloading the spine when it explodes from below. The design of the wheels is such that when a wheel breaks, it retains its functionality and you can ride it for another fifty kilometers at 50 km / h. 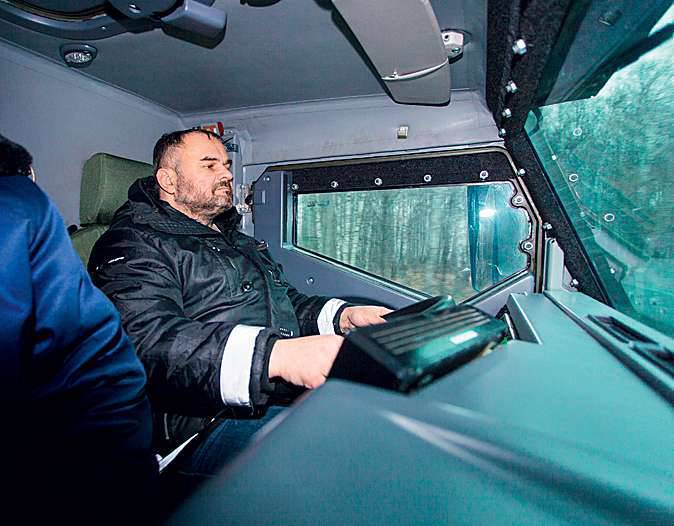 and can accelerate to 105 − 110 km / h, which is facilitated by the 450-strong KAMAZ-740.35-450 turbo diesel. The only thing that brought light discomfort while driving was the need to taxi: the car drove slightly to the side - perhaps this was due to uneven tire inflation.
Well, let's try to climb into the cab. It is located high - you have to climb a special ladder. The door is so heavy that it opens and closes the pneumatic drive. When the door is closed, the red locking knob must be further advanced. Standard “KAMAZ” devices in the cab are adjacent to LCD displays. Progress is evident! While in the cab, the driver has ample opportunities to control equipment. For example, it can set the tire inflation modes. Or - thanks to the adjustable hydropneumatic suspension - to change the ground clearance within plus or minus 200 mm. Another feature: any of the wheels can be torn off the ground and raised. It is convenient for replacing rubber without any jack; in addition, such a function can be useful in combat conditions if the wheel is badly damaged. The box is automatic, and certain design problems were associated with this. The fact is that, as all owners of cars with automatic transmission know, it is highly recommended not to tow such cars, much less start them up “from the pusher”. Due to the emergency lubrication mode, an expensive unit can be screwed up. And what about in combat conditions? Call a 24-ton tow truck? The designers had to think and still find a solution. "Typhoon-K" can be hooked to a tractor or tank and calmly, without prejudice to the box tow or start. 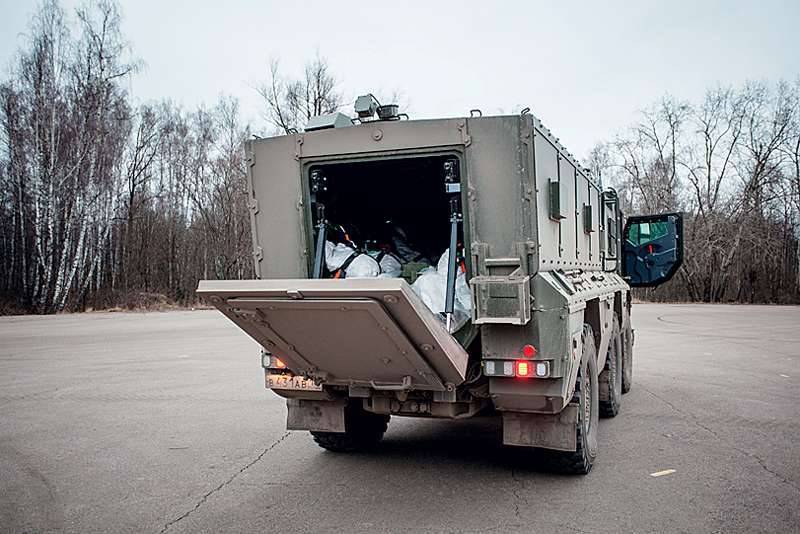 Well, turn on the Drive mode and go. We turn around on the platform - the turning radius of the almost nine-meter collar is relatively small, and this is due to the fact that two front axles participate in taxiing. True, when you turn the steering wheel, you have to turn it pretty, you immediately feel that it is not a car. Visibility in the cockpit, as in almost all military technology, leaves much to be desired. True, great side mirrors help a lot, and in addition, images can be displayed on the displays from cameras that are installed on board and cover the panorama 360 degrees. Frontal bulletproof glass thickness 13 cm skips 70% rays, which creates a feeling of light tinting. We roll out onto the asphalt road and drive somewhere further inland. Asphalt is replaced by broken concrete. There is a pothole on a pothole, and it is impossible to say that they are not noticeable in the cabin, but you still feel quite comfortable. We find another small area, again, easy to turn around and go back. Well, so what? A car is a car. While driving along the road, there is not even the feeling that you are driving a heavy car that is comparable in weight to a loaded wagon. This sensation comes only when braking, when, emitting a characteristic puff, the pneumatic brake is activated. In general, acquaintance with the "Typhoon-K" turned out to be extremely interesting, it remains only to regret that it was not possible to compare the car with the "KAMAZ-63969" (this is an experienced modification of the "Typhoon-K" with increased protection and the ability to install a remotely controlled machine gun) as well as with the Typhoon-U (a bonded MRAP type armored car in the Ural Automobile variant). Let's hope that this is all ahead.