Shipboard armor in the XXI century. All aspects of the problem. Part of 2 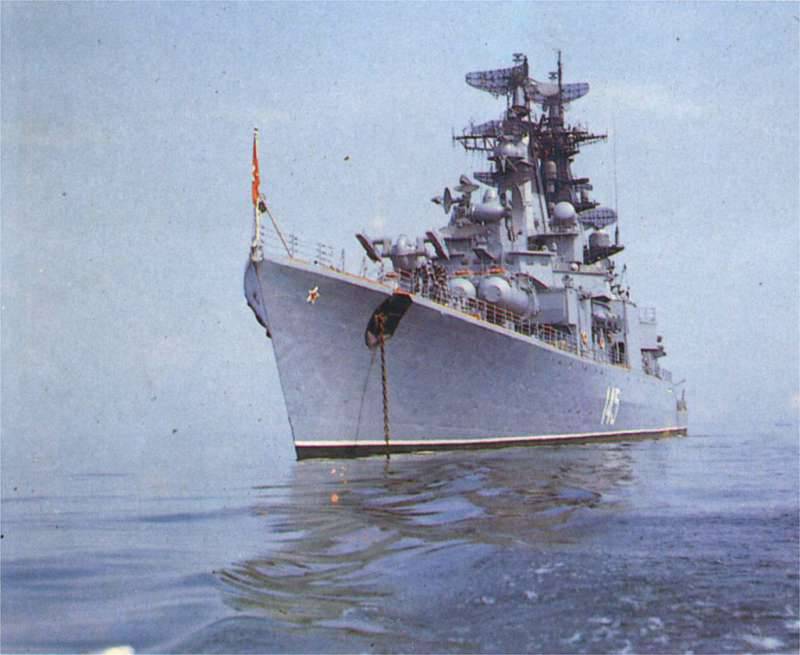 Let's start with the fact that we recall the previously stated statement that modern destroyers and cruisers are descendants of the Second World War artillery destroyers, and not of the battleships. And they never had a counter booking. Moreover, never in stories fleet there were no ships with developed anti-shell armor and a displacement of less than 5000 tons. For example, the famous leader of Tashkent with a total displacement of 4175 tons and a length of 133 meters (why not a modern frigate?) Had only a local anti-fragmentation armor 8 mm thick.

The first missile cruiser of the Soviet Navy was originally to become a destroyer, and even the number of the 58 project was from the "mine-carrying" series. The same applies to the first BOD of the Soviet fleet - the 61 project. Of the two ships, all the rest of the BOD and the KR went, right up to the most recent - like 1164. Naturally, they did not carry any armor and it was not planned.

However, despite the bad "miner" heredity, no one has yet decided to revive the booking in serious volumes. Only local protection of some systems is used, nothing more.

The first serious constraint is the growth of areas that need to be booked, if you really revive this important science. It is not at all the masses and loads that are the bottleneck of modern ships - for these items just the stocks are substantial. Modern ships need large volumes to deploy weapons and equipment. And these volumes compared with armored ships of the Second World War have increased significantly. And, despite the qualitative improvement of rocket technology from primitive 50-x samples to the most modern, the volumes allocated for rocket weapon, do not decrease. Any attempt to tighten the armor on these volumes leads to such refinement of the reservation that it turns into a foil.

The growth of volumes after WWII occurred rapidly. To demonstrate this phenomenon, we cite a fundamental work on the Soviet Navy "Navy USSR 1945-1991", V.P. Kuzin, V.I. Nikolsky, p. 447: "...the appearance of rocket weapons and radio electronic means did not have a fundamental impact on the design problems of such ships as AVK, DK, TSS, MPK, TKA and a number of others. At the same time, the appearance of multi-purpose ships of the KR class, EM and TFR under their influence began to change rapidly. Equipping them with rocket weapons and radio electronic means required from a new position to approach the issues of their general location. On these ships, while maintaining the relative mass of the ammunition at the same level, the volumes of the ammunition cellars increased 2,5-3 times as compared with ships built by 50. So, for example, the specific volume of the 130-mm artillery ammunition cellars was only 5,5 м3 / t, and the anti-aircraft missile cellars were already more than 15 м3 / t. ”

Further V.P. Kuzin and V.I. Nikolsky write: “In the same period, the space required for the placement of control posts for weapons and armament complexes increased. As a result, the relative volume of premises occupied by the payload increased by 1,5-2 times and amounted to 30-40% of the total volume of the hull with the superstructure. ... With a significant increase in the specific volume of the payload there was a sharp increase in the volume of the ship's hull, and, consequently, its relative mass increased from 42-43% to 52-57%. In the end, all this led to the fact that the side height and dimensions of superstructures began to increase rapidly. At the same time, the rocket cellars, due to the large dimensions of the rockets, not only did not fit below the waterline level, which was previously an indispensable condition for the location of the artillery cellars, but in some cases went to the upper deck. This led to the fact that more than 40% of the ship's length was occupied by explosive rooms. ”

From the above quotation it becomes clear why a very noticeable increase in the volume of payload does not lead to a decrease in the proportion of the volume of the hull. It would seem that superstructures should grow. But the corps themselves also became more voluminous than those of artillery ships, which led to the preservation of the relative share of the corps volume at the same level.

The author carried out his own calculations for a number of ships. 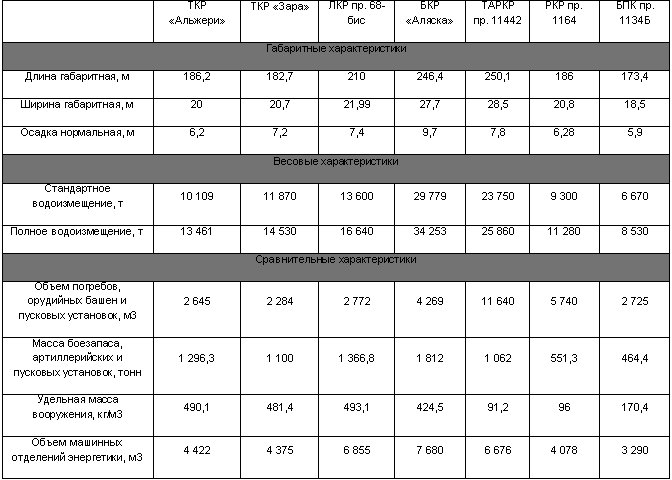 The table shows the ships of different eras and classes. All the more revealing are the results.

The increase in armaments on modern rocket ships is clearly noticeable - more than 2 times. If the “Algeri” 2645 m3 weapons volume, then at exactly the same size as the “Glory” it is already twice as large - 5 740 m3. Given that the weight of weapons fell by more than 2 times. The ratio of the mass of weapons to its volume is strikingly close to all ships "before the missile" era - even the 68-bis this 493,1 kg / m3 indicator, almost exactly the same as the Algeri with its 490,1 kg / m3.

The decrease in the volume allocated for the power plant is almost negligible. But on modern ships, completely new types of equipment appeared that simply did not exist on ships of the WWII era. This hydroacoustics, electronics, electronic warfare. For example, on the RKR of the “Glory” type, only one room of the towed HAS takes 300 m3 or 10 meters of body length. Along with the advent of new energy-intensive equipment, there is an increase in the number and capacity of electric generators, which also require ever increasing volumes. On the Alzheri TCR, the total power of the generators was 1400 kW, the LKR Brooklyn already had 2200 kW, and on the relatively modern BOD Ave 1134B it reaches 5600 kW. 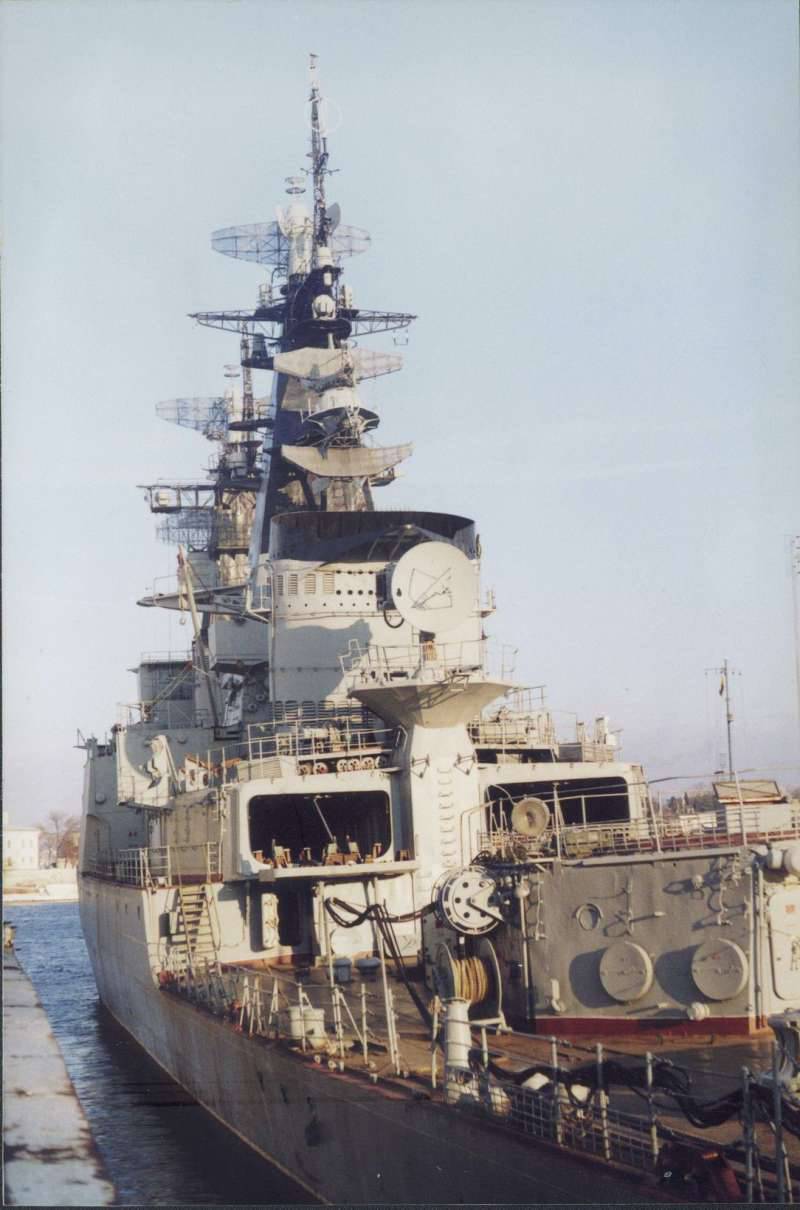 Missile cruiser "Admiral Golovko" on the disarmament at the Minewall, 2002 year. Clearly visible niches cellars PKR P-35, voluminous and placed in the superstructure. In the future, such bulky ammunition rooms on rocket ships did not, however, the volume of rocket weapons did not decrease to the volume of artillery installations. Photo: http://navsource.narod.ru/

Also visible is a clear underload of modern ships. With the same length and width, they have a noticeably smaller displacement and draft. Stocks for the load is clearly not fully expended by the designers. It is quite possible to load the RRC "Glory" with additional 1500 tons, if this does not adversely affect the characteristics of its stability. It is quite possible, because many ships in the process of operation are upgraded and receive additional load. For example, the LKR displacement of the Brooklyn type during service varied very widely, while maintaining the original dimensions of the hull.

As can be seen from the table, during the operation the Brooklyn-type LKRs were loaded from 500 to almost 1000 tons of additional load, which, of course, wagged both the draft and stability. The meta-centric height of "Brooklyn" in 1,5 is less than that of the modern BOD Ave. 1134B, which clearly indicates the reserves of the latter to increase the "upper weight". Destroyers of the class "Arly Burke" during the development of the project received an additional load in 1200 tons, settling on 0,3 meters and becoming the longest on 2 meters.

The assertion that the development of armored ships broke off with the departure of the WWII era is not entirely true. There is a class of armored combat ships, which were built in the 70-s and later. We are talking about armored cars and river artillery ships. These small ships are a good example of how a relatively modern ship, even without acquiring qualitatively new weapons, lost the protective qualities of armor. And the example of such boats shows the influence of objective factors.

The strongest BKA in the Navy of the USSR became a boat of the 191 project. This was the apogee of the development of the armored boat. He absorbed the entire experience of this class of ships during the Second World War. And the experience of this kind in the Soviet fleet was unique and the greatest. Construction of these ships began in the 1947 year. Then there was a big break, and finally, a qualitatively new descendant appeared in 1967 - the armored car of the 1204 project. 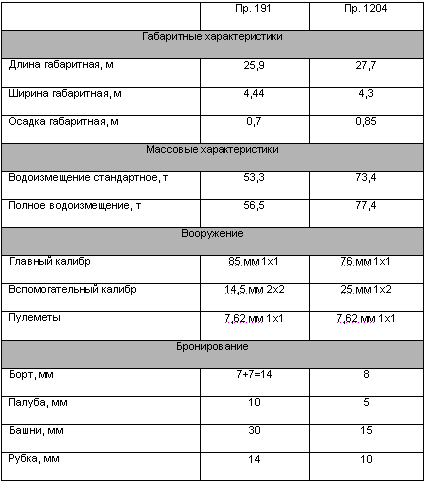 The boat of the project 1204 with practically unchanged dimensions became noticeably more massive, changed the 85 mm gun tank T-34-85 on a very weak gun of the PT-76 tank, and the thickness of the reservation was twice as bad. And if we also consider the area of ​​the hull, covered with armor, it becomes obvious that the project 1204 was not twice, but many times weaker than the boats of the project 191.

Why did this happen? Are the designers - mediocrity or pests? (by the way, the 191 and 1204 projects have the same main designer). Or has the 1204 design boat acquired volumetric, but light rocket weapons, underwater acoustics, or radio electronics?

We read A.V. Platonov "Soviet monitors, gunboats and armored boats": “But you have to pay for everything, just like here: comparatively powerful weaponry and defense were sacrificed, above all, habitability. ... So where does the claim to the harsh living conditions, which were almost the very first when discussing the concept of a new artillery boat, come from? And from the border guards. It was they who, having received the boats pr. 191M and using them as patrol and watchmen, fully experienced all the pleasures of living in tiny rooms, where it was not possible to get up to their full height everywhere. ”

Why are boats mentioned here? Solely in order to show that the refusal of reservation or its degradation may be associated with the emergence of new objective reasons, and not the cause of the stupidity or incompetence of naval strategists or designers. Armored boats are so small warships that the mere requirement to improve habitability (even without the introduction of bulk rocket systems and equipment) immediately led to a drop in the level of protection.

Further more. The USSR built a series of MAC 1208 project, which could not be compared with the pre-war monitors on the degree of protection and power of weapons. In the same place, at A.V. Platonov said about this: “... In part, all this is explicable: almost all modern military shipbuilding was confronted with the fact that the greatly increased demand for the deployment of modern types of weapons and technical equipment literally“ squeezed ”their combat posts from the corps. This led to the widespread emergence of elongated forecastles and bulky multi-tiered superstructures occupying almost the entire area of ​​the upper deck, and this had to be tolerated. ”

It should be noted that we are talking about “squeezing” up combat posts, and not about creating some new squares. This suggests that in the era of armor, and today - there are no unclaimed reserves from the designers of the ships. All resources are involved to the maximum, and it will not be possible to simply remove certain volumes. In a modern ship, there are no “unnecessary” volumes that can be easily sacrificed for the sake of improving other characteristics. Therefore, any "cutting" add-ons or reducing the size of the body will necessarily affect something important.

Ctrl Enter
Noticed oshЫbku Highlight text and press. Ctrl + Enter
We are
The cruisers of the 68 bis project: the Sverdlov missions in the post-war fleet of the USSR. 3 part"Svetlana". History of creation
Military Reviewin Yandex News
Military Reviewin Google News
83 comments
Information
Dear reader, to leave comments on the publication, you must sign in.