Copies from the laboratory for the breeding of "Russian rescuers", or Who sold the reverb carbonizer saffloids without a license ...

March 17 2016
159
The Vilnius meeting of the belolentochny activists of Russia has long been completed, and the information plume after the so-called “Forum of Free Russia” remains. And the degree of discussion is quite high. It is also high because the discussion of the actions of representatives of the so-called non-systemic opposition has reached the hall of the State Duma meeting. So, on Tuesday from the Duma rostrum, a deputy from the United Russia faction Robert Schlegel called on his colleagues in the lower house of parliament and representatives of the investigating authorities to assess the Vilnius statements made by those who are going to be in power in the Russian Federation.


At the same time, Robert Schlegel collected a rather interesting collection of quotes from the very people who discussed the “future of Russia” in the capital of Lithuania.

Evgeny Chichvarkin (one of the founders of Euroset, the former head of the ATP Moscow branch in 2008, left for permanent residence in Britain):
Because of the inability of the liberals to interact and win those who are for all the bad. Because they are brainless worms, they know how to walk in order, and we are not.

The person who marks in power calls millions of citizens of the country who are not ready to serve the interests of the sellers of the Motherland as worms. Zhenya will go far ... Far ...

Garry Kasparov (world chess champion, computer loser and since then turned into an ardent supporter of overseas values):
Historically, in Russia one of the most important conditions for successful reform was geopolitical defeat. If this is due to the loss of a part of the territories that in principle do not want to live by these Euro-Atlantic rules, well then. Russia is a big country. The USSR collapsed, and nothing terrible happened.

"Nothing bad happened"? In fact, for such a face hit. Why? Because tens of millions of citizens of the USSR turned out to be divided by borders, tens of millions faced the monstrous consequences of the collapse of the economy, the coming to power of the oligarchy. The fate of tens of thousands of families was crushed by the war: from Transnistria to Tajikistan, from Karabakh to Donbass. Thanks to the activities of the same nonentities of political "chess players", millions of people actually turned into outcasts only because they really loved their homeland - the country in which they were born. They loved and respected, in contrast to the same Harry Kimovich, to whom the Soviet Union gave everything, but for which foreign values ​​turned out to be higher. He will donate the territories! .. - Then start off with yourself - donate your own living space for a start, or something ... The West will appreciate ...

Alfred Koch (ex-chairman of the State Property Committee, in which this property was actively ceased to be “state”, being in the hands of the oligarchs) about the future management in Russia:
We will have to transfer some functions to international bodies. For example, the functions of the PACE Central Election Commission, the Constitutional Court - The Hague, and so on.

Constitutional Court of the Russian Federation - in the Netherlands? Prior to this, even forever jumping neighbors did not think. There is an opinion that Mr. Koch, with his creative ideas, is the place in the bureaucratic apparatus of independent Ukraine. There is generally grace for such creatives: if you want, transfer the COP to The Hague, and if you want, the government will go to Mars. Although about where the real government is "Square", its citizens are still wondering.

Artemy Troitsky (a man with a talking real name) Maidanuk):
There is an information war, which has very real victims. Moreover, as a result of it, a lot of crippled brains arise. That is, if you saw a padded jacket - right in the forehead. And if he is also with an iPhone, then take it and - in the forehead.

As can be seen only from this collection of statements by our “hotly adored” oppositionists, there is enough material for various articles of the Criminal Code of the Russian Federation: from inciting ethnic hatred to calls for extremist activity and denial of Russia's territorial integrity.

And here is a video from Mr. Chichvarkin, which generally makes one think about whether there is a place for doping (YouTube / ARU TV):


And all these and other similar pearls, Deputy Schlegel handed over to the Investigation Committee of Russia, so that there, at a professional level, they would assess the statements of this camarilla, which seriously considers itself a political force. Of course, the RF IC will give an assessment, and, according to the logic of things, there is every reason to initiate a criminal case. Another question, is it necessary? After all, as already noted, there is no worse samopiara than what the Vilnius gathering arranged: with beatings of journalists, with statements that they approve of the division of Russia, they approve of the transfer of Russia to external control. Who else is able today to add the current power of rating bonuses, if not these persons, as they say, by the opposite: 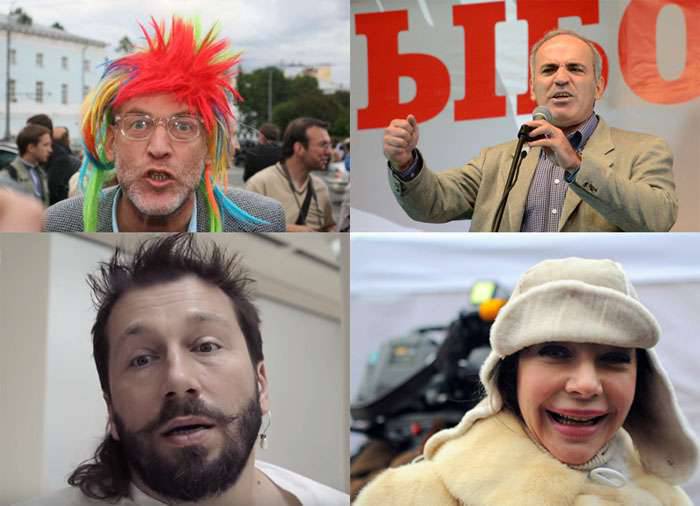 There is an opinion that for the overwhelming majority of Russians, the activity of those gathered in Vilnius is an excellent vaccination against the policies that “non-system” are trying to push through. It’s no joke to say that Mr. Kasparov mumbles something about the anti-corruption struggle, while he himself was once excommunicated from chess in connection with an attempt to buy votes in FIDE - marking the presidency of the chess association. Mr. Koch is broadcasting something about a cracking economy, although he himself at one time put a lot of effort so that the economy would not get off the hydrocarbon needle and was falling apart against the background of the predatory 90's privatization. Well, with Chichvarkin, Rynsky and others, everything is completely clear - there is something special with long chemical formulas ...

In general, criminal cases are not too much honor for these persons, who themselves had long ago been turned into political corpses with their own statements, with a real interest in the program, except from a medical point of view ... In general, Agent Jay , you would have a lot of work in Vilnius ...

Ctrl Enter
Noticed oshЫbku Highlight text and press. Ctrl + Enter
We are
In search of a grant, or Belolentochnaya gathering in VilniusEngineering Technologies-2012. The first days of the forum
Military Reviewin Yandex News
Military Reviewin Google News
159 comments
Information
Dear reader, to leave comments on the publication, you must sign in.