Gathered and talked. About Russia

March 17 2016
85
On March 14, the foreign ministers of the EU member states were going to brainstorm. The subject of discussion was chosen Russia. It has become fashionable to talk about Russia, about sanctions and “normalizing relations” in the EU. Eurobusiness incurs multibillion-dollar losses due to sanctions, capitalists complain, budgets receive less taxes. And therefore, the foreign affairs agencies of a dependent Europe, acting with an eye on the overseas hegemon, would like to somehow get closer to the Russians so as not to quarrel with the said hegemon. Well, they began to formally converge: the ministerial meeting adopted five principles of the EU policy on building relations with the Russian Federation. 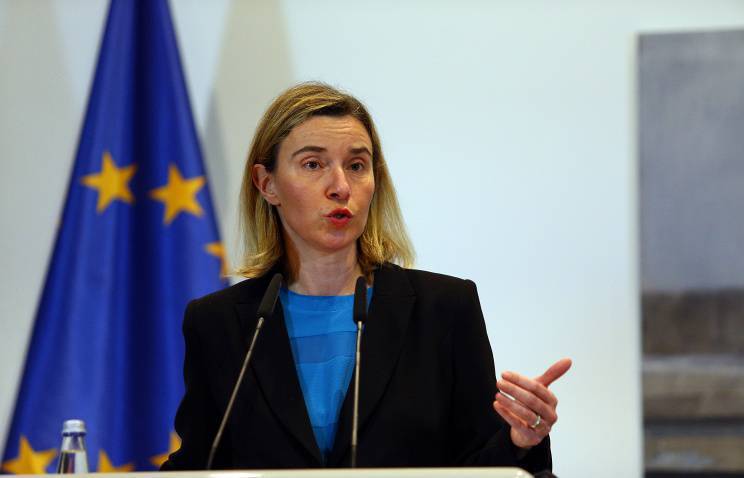 At the planned meeting of the EU Council in Brussels, the foreign ministers of the European Union states approved five principles of “building” relations with Russia, reports TASS.

"All 28 member countries unanimously adopted the five principles of the European Union policy for building relations with Russia," the agency’s senior representative for foreign affairs and security policy Federica Mogherini quotes the agency. According to her, the discussion showed the unity of all states of the union.

What basic principles were adopted at the meeting?

Principle number one: “the full implementation of the Minsk agreements as a key moment in our relations” (in quotes, the words Mogherini are given).

Principle number four: the development of cooperation with the Russian Federation on specific vectors of the international agenda, of particular interest to the EU. The need for cooperation with Russia on international issues (Iran, Syria, the Middle East region, migrants, the fight against terrorism, climate change, etc.) was noted.

Principle number five: “support of the civil society of the Russian Federation and relations between people in Russia and the EU”.

As for the extension of EU sanctions against Russia, this issue 14 March was not discussed. Nevertheless, TASS writes, the head of European diplomacy did not manage to avoid this topic: the journalists insisted.

Mogherini said that the issue of economic sanctions "will be discussed at the EU summit in the summer" (talking about the EU-Russia summer summit in June 2016 of the year).

As noted by "Russian newspaper"Europeans have long lost their unity in the assessment of relations between Brussels and Moscow. A number of European states are opposed to restrictive measures against Russia, and against the “automatism” of their extension. Such a position was voiced by the representatives of Italy, France, Hungary, the Czech Republic, Austria, Slovakia, Greece, Cyprus. Meanwhile, there is in the EU a group of states “with a strong Russophobic lobby”: they insist on continuing the current course in relations with Russia.

However, in Brussels they know that the EU’s damage from sanctions against the Russian Federation only in 2015 was expressed in the sum of 50 billion euros.

The Kremlin suffered a “period of anger”, and now it is waiting for the EU to decide on the conditions for future cooperation, says analyst Gevorg Mirzayan ("Expert"). In the best case for Russia and the EU, the author believes, we can talk about the development of common rules of the game in the post-Soviet space and a clear definition of red lines: the parties do not overstep for them.

Probably, these rules of the game will be the filling of the “Five Principles of the EU Policy towards Russia”, which were voiced by Federica Mogherini, the expert notes. He also points out that in the five principles of the EU “there are no unacceptable requirements or conditions for Russia, in particular, regarding the return of Crimea to Ukraine”.

Mirzayan’s special attention was drawn to the fifth principle concerning “support of the civil society of the Russian Federation and relations between people in Russia and the EU”. And indeed, it is curious: how will such a point be interpreted in Brussels?

Mirzayan recalls that Expert magazine has repeatedly written that the EU should liberalize visa regime with the Russian Federation for such support of relations. As for the "support of civil society", then you need ... to lift the sanctions. After all, they are damaging the Russian middle class as the basis of civil society, and at the same time the European image.

The expert does not exclude that the euro sanctions "may be canceled in the foreseeable future." No wonder Mogherini promised to hold a political discussion among EU leaders before the June summit. “Actually,” the analyst writes, “she had nothing else to do: the ministers of a number of EU countries (in particular, Italy and Hungary) openly stated that they are not going to renew sanctions automatically.”

It is unlikely that the European Union, we will add, dare “unilaterally” (that is, without the approval of the United States) not to extend the sanctions automatically. There are no suitable conditions for this: the hegemon of the refusal of sanctions will clearly not approve.

2 March 2016 US administration extended for the year of the sanctions against Russia "because of the events in Ukraine."

Russia responded to this with a comment from the Information and Press Department of the Foreign Ministry. In the document it is said: “It is regrettable that the United States continues to play with enthusiasm in sanctions against Russia, and for two years now they have been trying to ward off responsibility for the coup d'état in Ukraine, and now for the dire consequences of the rule of their Kiev clients. It is clear that the settlement of the Ukrainian crisis, which has stalled because of Kiev’s unwillingness to fulfill the Minsk agreements, doesn’t help at all, but it has a devastating effect on Russian-American relations. ”

However, Washington is not going to stop there. In the evening, 15 March, it became aware of the new hegemon sanctions plans.

The State Department is considering the introduction of new sanctions against Russia because of the Crimea, reports RIA News".

The State Department will study what other sanctions can be imposed against Russia because of the “annexation of the Crimea,” said Assistant Secretary of State Victoria Nuland.

“We will continue to study what we can still do,” she said at the Senate hearing.

According to her, notes "Lenta.ru"Washington "will never recognize the occupation of the Crimea and its entry into Russia, and the sanctions will remain." In addition, the United States is “concerned about human rights in Crimea, especially minorities,” and the militarization of the peninsula.

As we see, in the current conditions it is very difficult to count even on any kind of easing of the policy of US sanctions, not to mention their lifting. As for the European Union, he always followed Washington in foreign policy. And even if “obstinate” states like Hungary or Greece even spoke out against sanctions in due time, they somehow continued to support them. After all, to extend the sanctions regime, we need the votes of all EU members, without exception. Is it true that Brussels will break up with Washington in the summer? The legend is fresh, but it's hard to believe.

Observed and commented on Oleg Chuvakin
- especially for topwar.ru
Ctrl Enter
Noticed oshЫbku Highlight text and press. Ctrl + Enter
We are
Results of the week. "He flew away, but promised to return!"Results of the week. "It was a difficult year: taxes, catastrophes, prostitution, banditry and the shortfall in the army"
Military Reviewin Yandex News
Military Reviewin Google News
85 comments
Information
Dear reader, to leave comments on the publication, you must sign in.