Alexander III: Master of All Russia 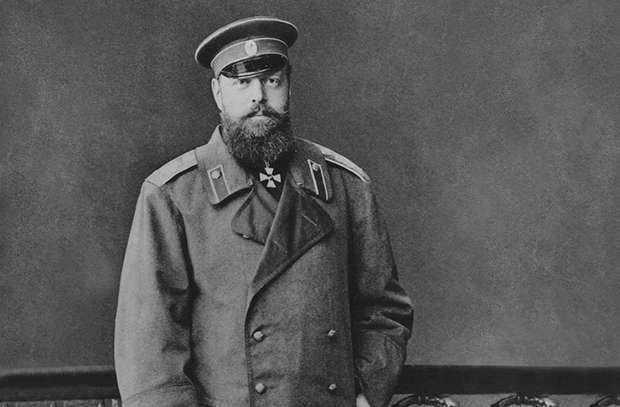 The emperor, who put an equal sign between his fate and the fate of the country, in 13 years turned Russia into one of the strongest powers of the world
Emperor Alexander III, who assumed the throne of 14 (2 old style) in March 1881, got a very difficult legacy. From infancy he prepared for a military career, after the death of his elder brother Nikolay, he had to change his whole life in order to prepare for the ascension to the throne. Since childhood, Alexander Alexandrovich, who suffered because of a lack of parental love, which mainly went to his elder and younger brothers, in the last years of his inheritance, he was forced to die down every day from fear for the life of the parent. Finally, he received the royal crown not from the hands of the aged and gradually retiring emperor, but from the hands of a mortally wounded father, whose lives were torn off by people who so monstrously tried to build a "kingdom of freedom."

Is it any wonder that the most consistent course of the thirteen-year rule of Alexander III was a decisive turn from liberal ideas introduced from outside to traditional Russian values. According to many contemporaries, in the penultimate emperor the spirit of his grandfather, Nicholas I, seemed to be embodied. The motto “Orthodoxy. Autocracy. Nationality "was perceived by Alexander as a guide to action. Perhaps, the fact that Nicholas I, as eyewitnesses said, had a genuine affection for the second grandson and made considerable efforts to provide him with the education that he considered right played a role in this. And I didn’t lose it: it was up to the grandson, who unexpectedly became the Tsarevich first, and then the Emperor, and had the honor of turning Russia into one of the most powerful world powers in a short time.

Nicholas I and Alexander III are related not only to the direct connection between the grandfather and the grandson, but in many respects the circumstances of their accession to the throne. For Nicholas, the reign began with an uprising on the Senate Square, and for Alexander, with the killing of his father by the People. Both of them had to start with investigating the actions of people whose actions seemed impossible, unthinkable, inhuman - and, alas, they demanded the same harsh reaction.

That is why the era of the reign of Alexander III, which in traditional Russian historiography is called the era of counter-reforms, was only partly so. Yes, the emperor deliberately went to the abolition of many innovations of his father, seeing in them not so much the improvement of life in the country, as an excuse to weaken the security of the population, starting from the top and ending with the lower classes. It must be remembered that the terrorist revolutionaries, arguing about the national welfare and calling for the death of "tyrants", did not consider at all victims of the deaths from the number of Sweet or bystanders to be the victims. They simply did not notice them, believing that such “incidental damage” was not only admissible, but also so only the inhuman essence of autocracy would appear more clearly. 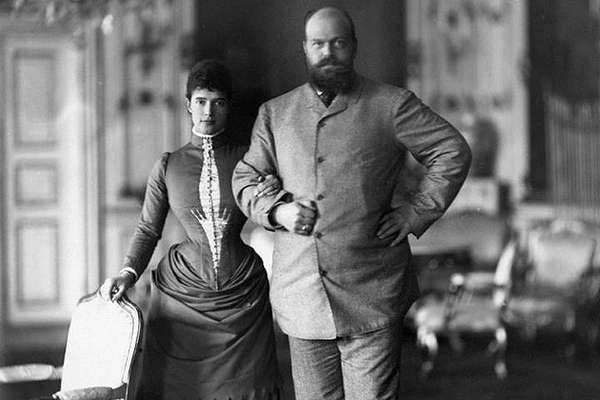 And in this autocracy in the person of Alexander III the essence was very humane. Passed a serious school of life during the years of the Russian-Turkish war of 1877 – 1878, having seen the peasant problems during the management of the Special Committee for the collection and distribution of benefits to the starving during the crop failure 1868 of the year, the crown prince Alexander perceived the whole of Russia as a single farm, whose success was equally depends on the autocrat, and from the last peasant.

“What can we say about him, who alone ruled the fate of a huge country that stood at a crossroads? - writes in his introductory article to the collection "Alexander III. Statesmen through the eyes of contemporaries" doctor historical Sci., Chief Researcher, St. Petersburg Institute of History, Russian Academy of Sciences Valentina Chernukha. - Undoubtedly, both the character of the country and the peculiarity of the time demanded from the new tsar not only the qualities of a statesman, but an outstanding figure who knows how to balance the desired and the possible, the necessary and achievable, see near and long-term goals, choose people for their implementation, in accordance with the tasks and not with personal sympathy. As a person, he was undoubtedly a bright character, a whole person, a bearer of firm principles and beliefs. In a private setting, he had many sincere friends, for almost all or many of his human qualities evoked sympathy. His appearance - a huge, clear-eyed man with a direct and firm gaze - corresponded as accurately as possible to his direct and open character, which was therefore easily guessed. His personality clearly dominated him over the statesman and was clearly manifested in the Tsar's policy, through which his character shines through. "

“They (Nicholas I and Alexander III. - Note. Author.) Had a general psychology - the owner of a large estate, solely responsible for everything, - continues Valentine Chernuha. - In this sense of ownership there were, of course, positive aspects. First, Alexander III was a hard worker, he literally pulled the state cart, delving into all foreign and domestic affairs. He was always overwhelmed with urgent and major affairs, and therefore he did not like secular entertainments: balls, receptions, which he was supposed to attend, and strove to, imperceptibly, leave. Secondly, the emperor was thrifty in a businesslike manner. The story of his darn-rewound pants that the servant had repaired him is well known. Foreign Minister Nikolai Girs was shocked when he saw a big patch on the king’s breeches. But Sergei Witte, the Minister of Finance, wrote in his reign about his sovereign, “I said that he was a good master; Emperor Alexander III was a good master not because of self-interest, but because of a sense of duty. I’m not only to the royal family, but also to the dignitaries I never met that sense of respect for the state ruble, for the state penny that Emperor Alexander III possessed. He kept every penny of the Russian people, the Russian state ashore, as the best owner could not take care of it ”.”

Of course, it was simply impossible to imagine such a master, as Alexander III was, how he gives the farm to the management of people who absolutely look at the value of each employee in this farm! Therefore, the motto of official populism was much closer to Aleksandr Aleksandrovich than the slogans of the narodnik-terrorists. Therefore, he patronized the Orthodox Church, seeing in it not “opium for the people”, not an institution that provided unquestioning obedience of the people to the monarch, as often happened in Europe, but a mentor and comforter of Russia. 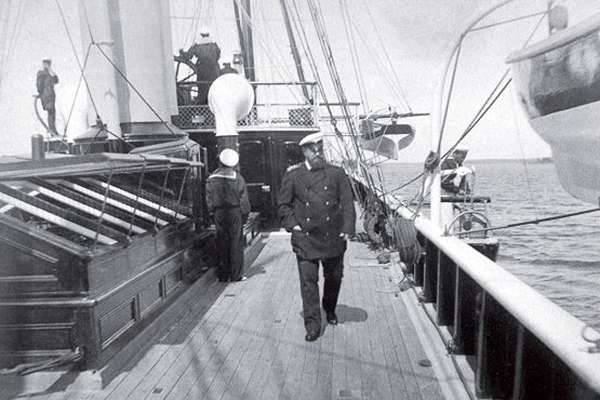 Alexander III on deck. Photo: civilization-history.ru
Here, in this economic attitude towards Russia, which Alexander demonstrated firmly and consistently throughout his reign, his desire to make her as strong and independent as possible is rooted. And for this, he needed not only “two faithful ally - the army and the navy” (they, with him, it must be admitted, turned into a real formidable force with which all of Europe was considered), but also a powerful economy. To raise it, Alexander Alexandrovich did a lot. Perhaps he can be called the first ideologist of import substitution: by introducing protective duties on many technological goods and technologies themselves and at the same time supporting Russian industrialists, he achieved that during his reign the country's own metallurgical and heavy industry grew. This made it possible not only to re-equip the army and the navy at the expense of its own capabilities, but also to extend the railway network 10 000 versts: the idea of ​​a strong transport connection of the center with the outskirts was one of the most important for the emperor. And there was something to connect: it was under Alexander III that the territory of the Russian Empire grew by 429, 895 km2, mainly due to Central Asia and the Far East. And it was possible to do this almost without a single shot - few kings, emperors, chancellors and presidents of that era could boast the same achievement! But the reason that the king sought his goals at such a price was simple: Alexander categorically did not want to pay for the expansion of the country in the lives of its inhabitants.

Finally, like any zealous owner, Alexander III with all his might contributed not only to the work of his subjects, but also to their education. By putting into action a very tough university charter, which the liberal-minded contemporaries called “suffocating,” he actually achieved above all that students and professors finally focused their efforts on education, and not on political discussions and the implementation of dubious ideas. At the same time, the “strangler of free university thought” founded the first university in Siberia - Tomsk, which quickly became a major scientific and educational center. He also ensured that the number of the lowest educational institutions in the country — parochial schools — grew eight times in 13 years, and the number of students enrolled in them: from 105 000 people to almost a million boys and girls!

Most of the laws were aimed at achieving a single goal. And this goal was more than worthy: to do everything so that free interpreters of the idea of ​​political freedoms would not let Russia go around the world, slowly but surely returning to its former greatness. Alas, the emperor-peacemaker was given too little time to lay a really strong foundation for the security of the country. Perhaps the most accurate thing about the role that Alexander III played in both Russian and world history, a week after his death, the famous historian Vasily Klyuchevsky said: “13 years passed by the reign of Emperor Alexander III, and the hurried hand of death was in a hurry to close his eyes, the wider and more astonished were Europe’s eyes opening up to the world significance of this short reign ... Science would give Emperor Alexander III a fitting place not only in the history of Russia and all of Europe, but also in Russian historiography, he would say that he had won those where the victories are most difficult to gain, the prejudice of the peoples conquered and thus contributed to their rapprochement, subjugated the public conscience in the name of peace and truth, increased the amount of good in the moral circulation of humanity, encouraged and elevated the Russian historical thought, Russian national self-consciousness, and did all this so quietly and silently, that only now, when he was no longer there, did Europe understand what it was for her. ”