Where is Russian California from? 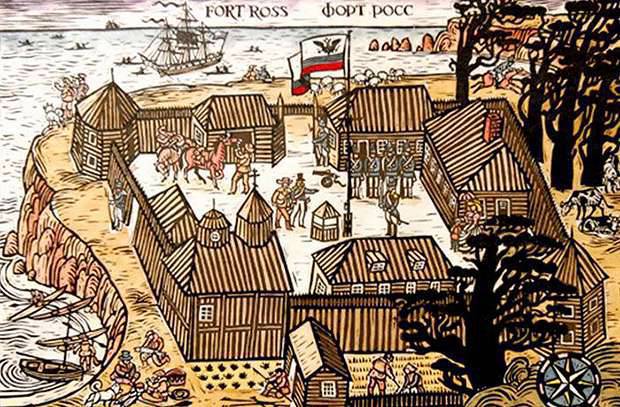 15 March 1812 was founded the legendary Russian outpost on the North American coast of California - Fort Ross
The legendary sale of Alaska to the United States — a deal that deprived the Russian empire of one and a half million square kilometers of territory, albeit not the most convenient for life, but, as it turned out later, the gold-bearing one — was the last point in stories Russian America. However, one must be well aware that this geographical concept until the middle of the 19th century was not exhausted by Alaskan land alone. Of course, it was there that the main Russian colonies were located on the North American continent, but these were not the only Russian settlements. California was the most southerly point of advancement of Russians who had mastered North America, and in it was the Ross settlement.

The first stone and the first trunks of the redwoods, from which the walls were built to protect the village, were laid there more than a century ago - March 15, 1812. And on August 30 (September 11 in a new style) the flag was solemnly raised above the fortress. It was the flag of the Russian-American company - a semi-state colonial trading company, the full name of which sounded much more magnificent: Under the highest protection of His Imperial Majesty the patronage of the Russian American company. In the early years of the company, the emperor Paul I acted under the title of patron, and during the founding of the California colony Alexander I.

The appearance of the fortress Ross, which now bears the Americanized name Fort Ross and is a national historical monument of the United States, is obliged to the perpetual hardships experienced by Russian colonists in Alaska. The Russians began to develop the lands there much earlier, at the end of the 18th century. Through the efforts of the merchant families Grigory Shelekhov and Ivan Golikov, as well as their main competitor - Pavel Lebedev-Lastochkin (who, however, quickly survived from this business), the first commercial settlements and villages of the fur miners appeared on the Alaskan shores. It was Grigory Shelekhov, along with the legendary Nikolai Rezanov (thus, praised in the romantic production “Yunona and Avos”) and they founded the Russian-American company, the supply of which was conducted for a long time through the Russian Far East. But the peculiarities of navigation in the Bering Strait and in the North Pacific in general turned each supply expedition into a lottery, in which the win was often left behind the elements. And the cold land of Alaska, rich in furs, alas, could not provide the Russian settlers with bread and animal products. 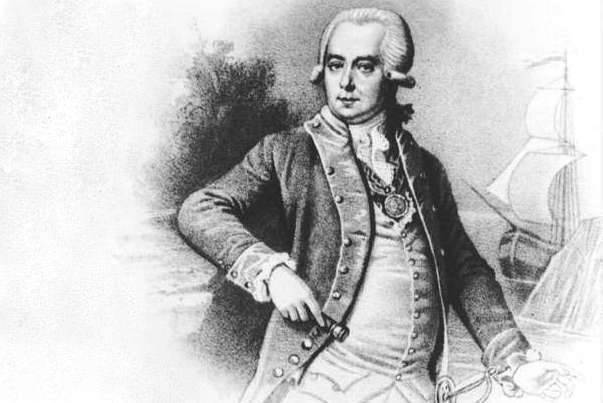 Gregory Shelekhov. Photo: topwar.ru
In search of new places in the West of the North American continent, where it would be possible to grow bread and cattle without crazy tension and enormous expenses, Lieutenant Ivan Kuskov, an employee of the Russian-American Company, went south along the Pacific coast. In January, 1809, he found a good spot on the bay, which he called the Rumyantsev Bay in honor of Count Nikolai Rumyantsev, who was at that time the Minister of Commerce of the Russian Empire. Lieutenant Kuskova attracted not only the colossal colony of sea otters, which were one of the main objects of fur trade in Russian America, but also a comfortable plateau three dozen kilometers from the bay, which looked like a great place for a new settlement. Two years later, Kuskov returned to Rumyantsev Bay and carefully inspected the plateau, making sure that there was really no reason to start building serfs, which would become a stronghold for fur farmers, as well as tillers and pastoralists: nearby the expedition found many convenient places for fields and pastures.

Having studied the materials of these expeditions, the then head of the Russian-American company, Alexander Baranov, at the end of 1811, decided to support the proposal of the researcher and build a village in Rumyantsev Bay, which would become the southern outpost of Russian America. At the end of February 1812, Ivan Kuskov returned to the selected site, along with 25 Russian colonists and nine dozen Aleutians, whom he was going to use on the preparation of furs. It was this one hundred brave souls who were the first builders and inhabitants of the Ross fortress — they gave that name to her, drawing him out from several other proposals (alas, their history did not preserve). And the creek, which flowed ten kilometers from the fortress and supplied the newly laid fields with water, was called Slavyanka - now it bears the name Russian River, that is, “Russian River”.

The village of Ross was not just the first Russian colony in California - it became the first in many areas of agriculture in this part of North America. It was here that, for the first time on this land, they began to cultivate wheat and rye, set up windmills, smashed orchards and vineyards. And perhaps the first shipyard in California, the boat workshop and the boat shed became the most amazing structures of the colony. Russian shipbuilders initially built there only small Kochi boats for coastal navigation and mining of sea otters, but over time they got around to larger sailing ships, such as brigs, which were used to deliver Californian products to Alaska. Remarkably, almost all the metal parts for ship equipment were made in the same place in the Ross fortress.

From the very first Russian vineyards, Californian winegrowing began, which this most densely populated state of the United States is now so proud of. And in those years, few Europeans - mostly Spaniards - and slightly more numerous Indians looked at the Russians as if they were newcomers from another planet. After all, these people behaved quite differently from the "enlightened" colonialists from the Old World. They - and this requirement was rigidly fixed by the statutes of the Russian-American company! - did not humiliate and did not oppress the Aborigines, and tried to maintain with them the most good-neighborly relations. If Indians were attracted to work, most often agricultural, then they were paid for it - a step inconceivable for the Spanish colonialists! 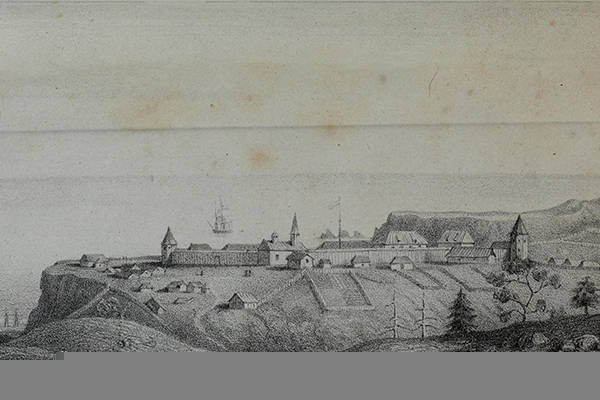 Fort Ross. Engraving 1828 of the year. From the archive of the Historical Society of Fort Ross
By the way, the Russian colony in California was distinguished by enviable tolerance and internationalism. There were a minority of ethnic Russians in Ross Fortress: in different years from 25 to 100 people, almost exclusively men, who worked for a Russian-American company. Most of the population were Aleuts - the indigenous people of Alaska, whom the Russians called the common name: from 50 to 125 people. In addition to them, local Indians, mainly wives of Russians and Aleuts, as well as children from such mixed marriages, called the common word “Creoles” (by the middle of the 1830-s, they constituted one third of the total population), appeared in the census sheets of the Californian colony. Besides them, there were very rare nationalities: Yakuts, cattlemen, Finns, Swedes and even Polynesians. On better days, the population of Ross Fortress and the ranch settlements around it comprised up to 260 people who not only provided themselves with everything they needed, but also supplied provisions and goods to Alaska, and also engaged, again to the surprise of “civilized colonialists” organized by training Californian Indians account, literacy and blue-collar occupations.

Ross Fortress in California lasted less than three decades, never becoming, alas, the beginning of a large Russian colony in these lands. The remoteness from other Russian lands, primarily from the metropolis, and the difficulties in relations with the Spaniards, who refused to recognize the right of the Russians to the areas they inhabited, and the climatic features of the area, also affected. Because of them, only cattle breeding was truly successful: coastal areas were not very suitable for grain farming, and the settlers had neither the strength nor the consent of the Spanish authorities to move deeper into the continent. The ryan fishing, which gave a substantial profit in the first years of the existence of the Ross fortress, began to decline as soon as the hunters exterminated most of the local population of these animals. As a result, from the middle of the 1820-s, the California colony became unprofitable, its products did not provide all the needs of Russian America, which they expected at the beginning, and it was decided to sell the settlement. I bought it in 1841 for 30 thousand dollars - 42 thousand rubles in silver - a businessman John Sutter, who ultimately did not pay the full amount due, most of which was the supply of grain to Alaska.

Ctrl Enter
Noticed oshЫbku Highlight text and press. Ctrl + Enter
We are
For the fate of Russian California, the transition to peasant colonization would be a salvationOn the sale of Russian Colony Fort Ross in California
Military Reviewin Yandex News
Military Reviewin Google News
23 comments
Information
Dear reader, to leave comments on the publication, you must sign in.