Army of one war


The armed forces of Armenia and Azerbaijan were formed during the Karabakh conflict. Baku has lost not only almost all of the NKR, but also significant areas beyond that. For two decades, Azerbaijan has been preparing for a new war over Karabakh.

Since the Armenian side has the advantage of defending in well-fortified and equipped positions, the attacker needs to achieve significant superiority in strength in order to count on victory. Therefore, the country conducts massive purchases of military equipment in Russia, Ukraine, Belarus, Israel, Turkey, South Africa. In fact, from scratch created its own defense industry, which is engaged in the licensed assembly of armored vehicles and MLRS, the manufacture of small weapons.

In service there are 12 launchers TR "Point". Tank The fleet includes 100 of the latest Russian T-90S and 379 T-72. 98 obsolete T-55s were decommissioned, their further fate is unclear. Azerbaijan closely cooperates in the military sphere with Israel, so it is likely that the Azerbaijani T-55 will turn into heavy infantry fighting vehicles like the Israeli "Ahzarit". There are 88 BRDM-2, 20 BMD-1, 63 BMP-1 and 21 BRM-1, 186 BMP-2, 101 BMP-3. The number of armored personnel carriers and armored vehicles is approaching one thousand - 3 Ukrainian BTR-3Us (Azerbaijan has refused further purchases), 40 BTR-60, from 179 to 239 BTR-70, 33 BTR-80 and 70 BTR-80A, 11 BTR-D, 55 South African Matador and 85 Marauder (produced under license in Azerbaijan itself), at least 35 Turkish Cobras, 393 MTLB. More than half of all this equipment is listed not in the Armed Forces, but in the VV and border troops. 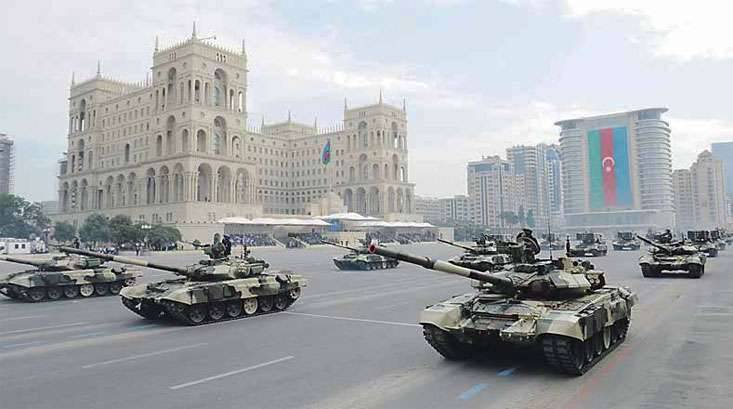 Azerbaijani Navy consists of ships and boats inherited from the Soviet Caspian flotillacomplemented by turkish and american patrol boats. The largest is the extremely obsolete patrol guard (frigate) of project 159A. The entire fleet is very outdated, has no missile weapons, therefore it is currently the weakest in the Caspian Sea (more - “Museum on the High Seas”). Perhaps, the construction of 6 patrol ships under the Israeli project OPV-62, which will be equipped with universal Spike-NLOS missiles, will partially change the situation.

But in general, in terms of the quantity and quality of military equipment, the pace of its renewal, Azerbaijan is clearly striving to become one of the three strongest in the post-Soviet space. However, Baku’s plans in the field of military construction may change greatly due to falling oil prices.

From junior to senior

It is more than obvious that the Karabakh problem is not solved peacefully due to the mutually exclusive positions of the parties. At the same time, the current status quo suits everyone except Azerbaijan. It is extremely difficult to assume that he spends so much money on strengthening the Armed Forces for something other than changing the situation militarily. Moreover, the purchased equipment (T-90 tanks, MSTA self-propelled artillery system, Smerch MLRS and TOC-1А) is clearly intended to crack the Armenian defense in Karabakh. The question is at what point in Baku they decide that they have achieved decisive superiority, and to what extent this assessment will be adequate. 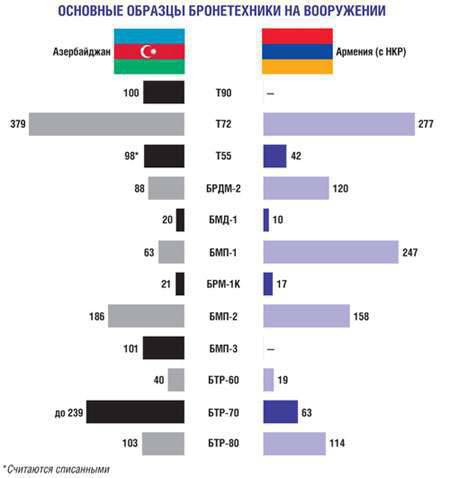 Russia in this case finds itself in a delicate situation: it was she who sold all the offensive weapons to Azerbaijan. It is difficult to assume that Moscow did not understand what this technique was intended for — against our closest ally in the CSTO. The situation is doubly difficult because long-term strange flirtations with Ankara (the main ally of Baku) ended in the expected failure and tough confrontation. In this regard, the new war between Armenia and Azerbaijan can very easily develop into an armed confrontation between the “senior comrades” - Russia and Turkey. Moreover, there remains a significant likelihood of their direct military confrontation due to Syria.

The peculiarity of the situation is that the “older” ones do not border on their “younger” allies, but they border on the “younger” opponents: Russia with Azerbaijan, Turkey and Armenia. And there is far from a zero probability that the domestic equipment sold by us to Baku will fight not only against our closest ally, but also against the Russian army.

If a war breaks out between Russia and Turkey, which will also drag in Armenia, a strong temptation will arise in Baku to strike at Karabakh from the north, taking advantage of the fact that the Armenian armed forces are fully engaged on the Turkish front. However, in this case, Azerbaijan itself has a chance to get a strike from the north, from Russia. Moreover, there is a significant likelihood that Iran will not only sympathize with the Russian-Armenian coalition, but also directly fight on its side. Then Azerbaijan will also get from the south, which will make for it zero chances not only for victory, but also for survival. Because of this, Baku will first monitor the situation at the front, and if it begins to take shape in favor of Turkey, refrain from participating in the war. However, in this case, Azerbaijan will be able to forget about Karabakh at least - for decades, at most - forever.

Ctrl Enter
Noticed oshЫbku Highlight text and press. Ctrl + Enter
We are
Scouting fightDay of the Armenian army. How the armed forces of Armenia were formed and developed
Military Reviewin Yandex News
Military Reviewin Google News
306 comments
Information
Dear reader, to leave comments on the publication, you must sign in.