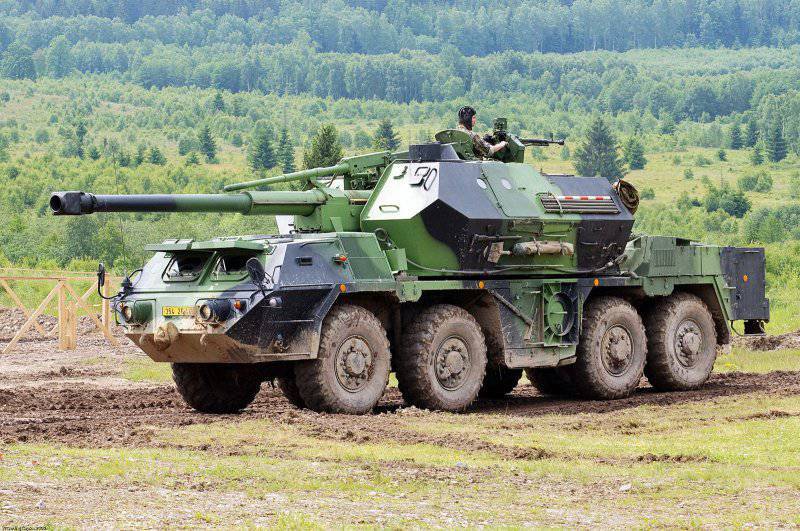 In 1976, a design team from the Czechoslovak company Konštrukta Trenčín Co. finished work on a new 152-mm self-propelled artillery mount. By that time weapon possessed several unique features that put this howitzer in a small list of the most modern in the world. Czechoslovak People's Army gave this howitzer girl's name Dan and the abbreviation vz.77. ZTS Dubnica nad Váhom, now in the territory of Slovakia, was selected as a manufacturer. 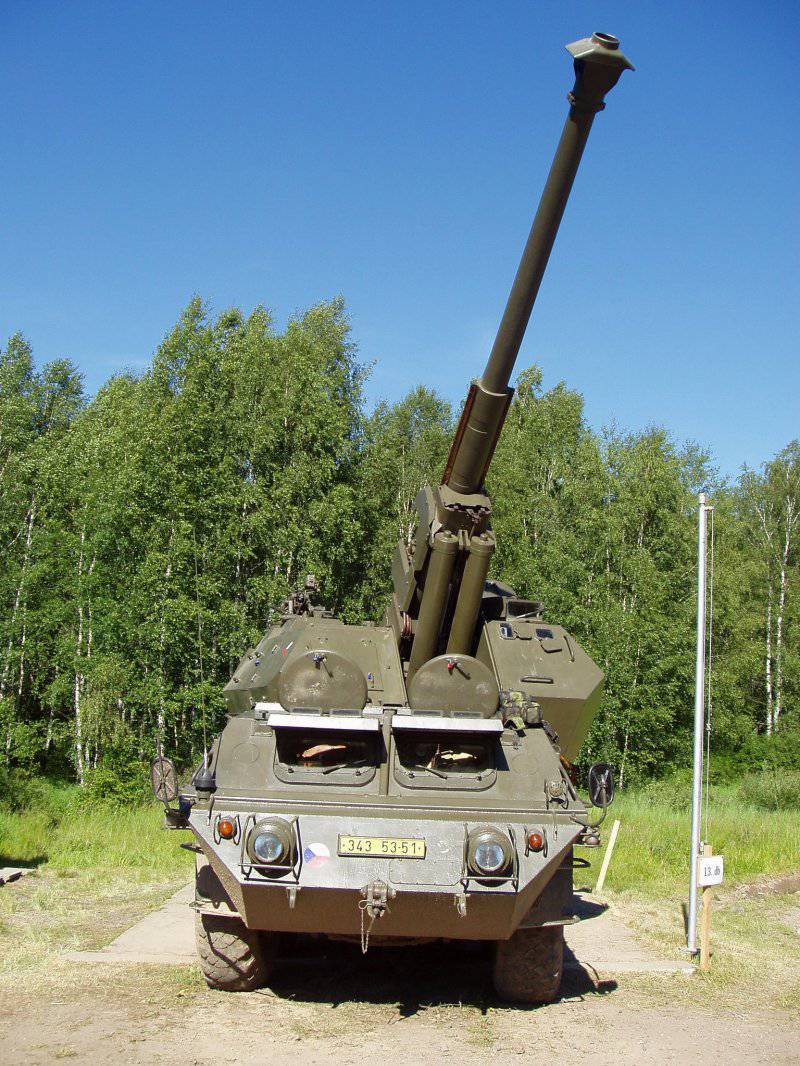 The artillery unit Dana vz.77 is based on the Tatra 815 truck chassis with the 8xNNXX wheel formula and two front steering wheels, equipped with an independent spring suspension with an air pressure regulation system in the tires. The frame has three armored, hermetically sealed and air-conditioned cabins, which also provide protection from small arms fire and shell fragments. The crew of this howitzer cannon consists of five people. In the front cockpit are places for the commander and driver. Access to them is through the two upper hatches. The commander operates with a fire control panel and a radio station to communicate with the higher command. The tower consists of two armored half-towers with a gun mounted between them. In the left part of the gun are the gunner and loader jobs located in tandem, followed by mechanized charging of charges. In the right part, the workplace of the second loader, and in front of him the mechanized laying of shells. In the space between the two compartments, there is a gun howitzer, as well as a moving belt, designed to remove used cartridges. Above the barrel of the gun is placed the mechanism of filing. Access to the left is through a side door or top hatch. The gunner uses a small swiveling turret for observation, inside of which is a telescope and two types of rifle sights. The loading operator is responsible for the semi-automatic hydraulic charging conveyor for 8 charges, which is located in the second half of the left side. Behind this conveyor is a smaller box for spare ammunition (30 projectile plus 4 charges), accessible only from the space between the two compartments of the turret. The right side of the tower consists of three parts. In the front there is a place for personal equipment of the crew, in the middle - a semi-automatic conveyor with 12 projectiles. The shells are loaded into the conveyor after the side door is opened, placing them in the slots and tilting into the holder of the charging conveyor. In the back is the place of the second loader. It is accessed between the two compartments of the tower or through the upper hatch. The second loader controls the operation of the entire semi-automatic loading system. This whole procedure is performed without direct contact with ammunition. The upper hatch is also used to use the 36-mm anti-aircraft machine gun DShK 12,7 / 38. In the space of the second loader are also boxes of cartridges for machine guns and charges of anti-tank RPG-46. 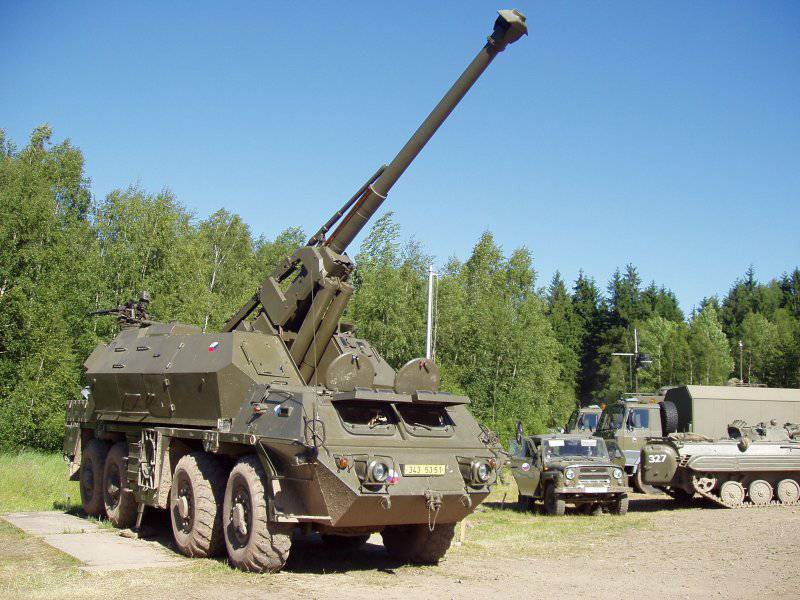 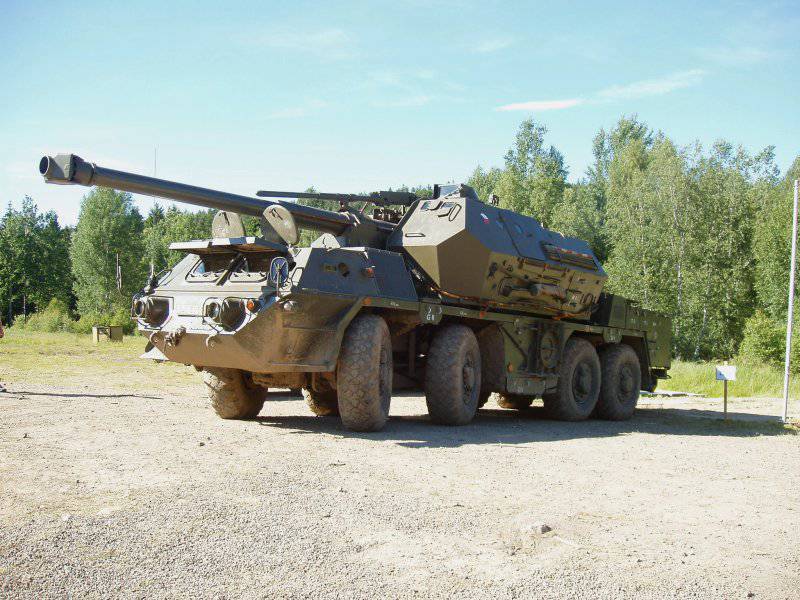 The air-cooled twelve-cylinder V-shaped turbo diesel TATRA is located at the rear of the car and is powered by an 500-liter tank. The engine allows the vehicle with a combat weight of 29 t to reach speed on the highway 80 km / h, power reserve in 600 km. There are also two spare 20-liter cans with oil. The crew has a personal weapon, a flare gun and hand grenades for self-defense. 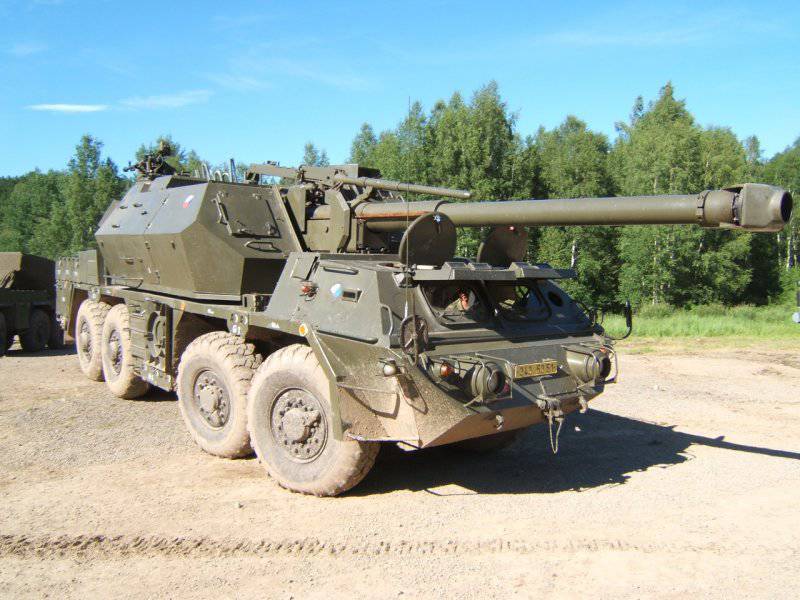 A very serious disadvantage of the “Dana” is the lack of the possibility of loading from the ground. 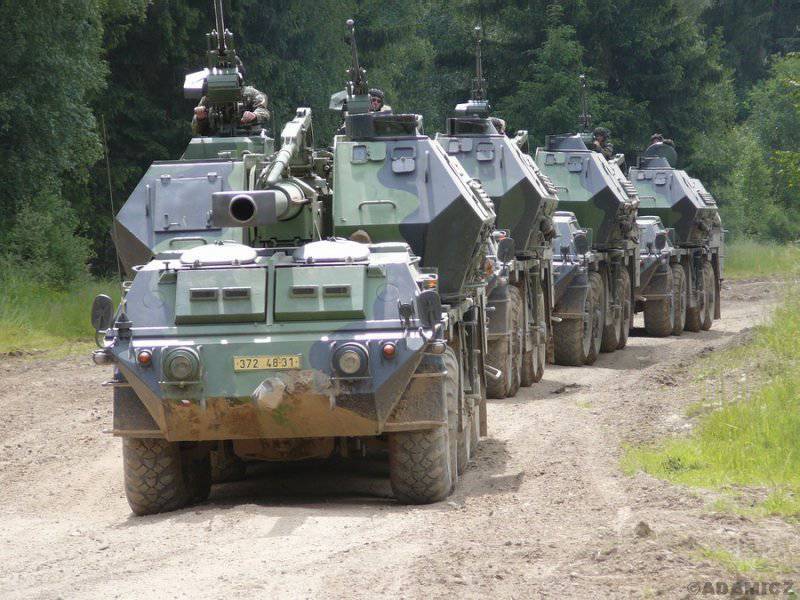 The plant in Dubnice nad Vahom produced a total of 672 Dana installations, some of which were exported. The Polish Army acquired 111 howitzers. The first of them were delivered in 1983 year and are still in service with the Polish army. Libya has acquired an unknown number "Dan", but at least 27 units. Not less than 12 installations "Dan" were noticed at the disposal of the army of Georgia.

Special история with the service of "Dana" in the army of the Soviet Union, which acquired 126 installations. It was almost the only weapon system used by the Soviet army, but not designed or produced in the Soviet Union. They were used in limited quantities.

In the 1979, at the Rzhev artillery range, qualification tests of two Dana samples were carried out, which, as expected, showed no advantages for the Czechoslovak howitzer cannon over the domestic counterpart. In 1983, a letter was sent to the General Staff from the USSR Academy of State Administration about the inexpediency of supplying Dana installations to the Soviet Union. 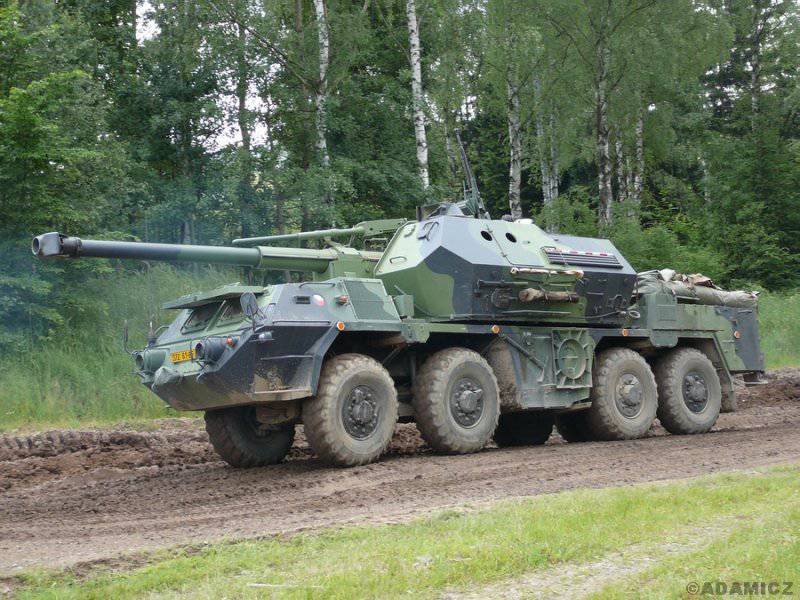 Nevertheless, in the same year 1983, the decision was made to accept a certain amount of vz.77 into experimental military service in the USSR. For this, a number of self-propelled units were purchased in Czechoslovakia. For about one year, Dana were in trial operation, after which they were returned to Czechoslovakia. In 1985, in the name of USSR Minister of Defense Marshal S.L. Sokolov was sent a report on the results of trial operation of LNG "Dana". After reviewing it, the Council of Ministers of the USSR issued 25 of October 1986 a decree No. 2151rs “On the purchase in 1987-89 of Czechoslovakia 152-mm self-propelled howitzer guns“ Dana ”.

Deliveries were made in 1987-1989. and Dana were in service with the 211 Artillery Brigade from the Central Group of Forces, located after the invasion of Czechoslovakia 21 in August 1968 in Jeseník. Until the rearmament, the 211 Brigade consisted of four divisions equipped with D-20 towed guns and 2-XNNXX self-propelled guns. With the beginning of the replacement of the material part, the compound moved to a new state: it now included five divisions, each of which had three 5-gun artillery batteries. As of 8, the brigade had 02.02.1990 Dana installations. In addition to the TsGV artillery brigade, vz.104 entered the artillery training center located in the territory of the Belarusian Military District. After the withdrawal of the Central Group of Forces from Czechoslovakia, the 77 Brigade was incorporated into the troops of the Moscow Military District and redeployed to the village of Mulino, Gorky Region. The materiel of the brigade was transferred to Kazakhstan and remained there. 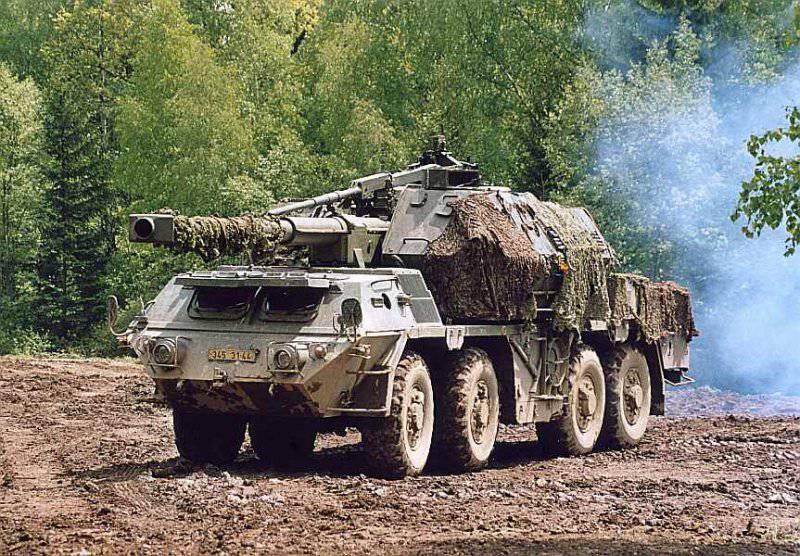 In the opinion of the officers who served in the 211 Brigade, the artillery unit of the “Dana” was very sensitive to the operating conditions, and it turned out to be too “tender”, for this reason there were a lot of failures. The maneuverability of the eight-wheeled chassis, which was even higher than that of the BTR-70, received a certain praise. The turning radius of an artillery installation allowed it to drive in narrow places in one go where the armored personnel carrier needed to go with reverse gear in two stages. 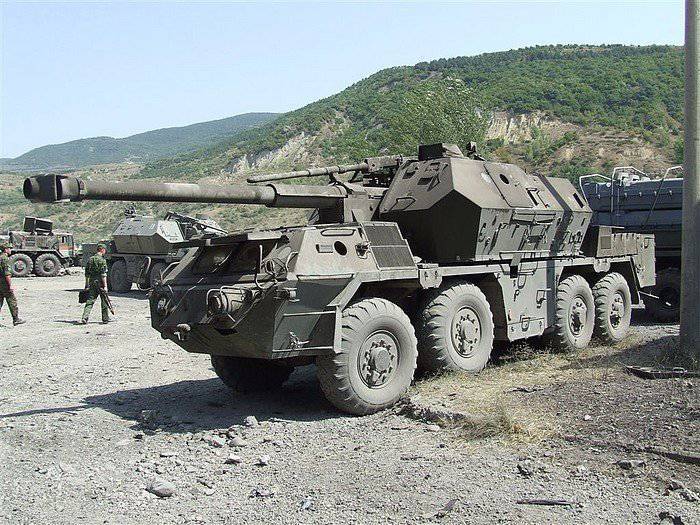 The self-propelled howitzer gun "Dana" was first used in the eighties during the military operations of the troops of Gaddafi in Chad. Further combat use was in the summer of 2008, when Georgian “Dans” took part in battles with the Russian army during the conflict in South Ossetia. Then the Georgian troops, retreating, threw three "Dana", which were captured by the Russian army. From 2008, the X-NUMX howitzer “Dana” has been successfully used by the Polish contingent at the Ghazni base in Afghanistan as part of the 5 artillery brigade. 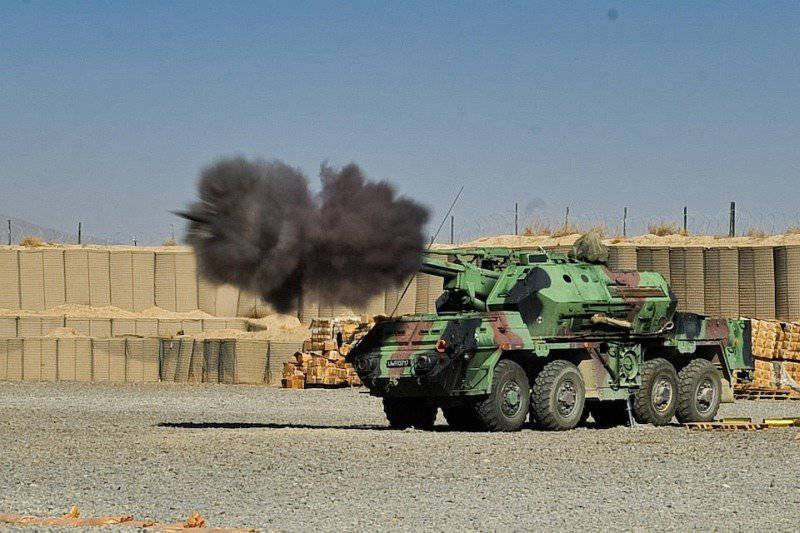 At the end of 80, there was an attempt to modernize Dana. Only units were modernized and named Ondava. The barrel was extended almost 2 meters, and other changes were made to the weapon systems and the cockpit. The gunner’s compartment received new electronic equipment and infrared night vision systems. Based on Dana vz.77, a new Zuzana howitzer gun was created, but this is another story.

Ctrl Enter
Noticed oshЫbku Highlight text and press. Ctrl + Enter
We are
Overview of artillery. Part of 2. Hell on wheels155-mm self-propelled howitzer XM1203 NLOS-C (Part 1)
19 comments
Information
Dear reader, to leave comments on the publication, you must to register.