The strongest non-nuclear explosions in history

March 17 2016
23
The invention of gunpowder by man forever changed the nature of warfare. Already in the Middle Ages, gunpowder was widely used not only in artillery, but also to undermine the fortress walls, under which were made undermining. In this case, the defenders were not sitting idly, they could also blow up these digs or dig countergalleries. Sometimes real battles took place underground. These underground battles became much later an element of the First World War, when the opposing countries got bogged down in a positional war and trench seat and returned to the tactics of digging undermining and laying under enemy fortifications of underground mines of monstrous power.


At the same time, during the First World War, there were two explosions of enormous power, one of which was carried out during the Battle of Messina in June 1917, and the second occurred already in December 1917, far from the front line in Canadian Halifax, almost completely destroying this city. The Halifax explosion is one of the strongest man-made non-nuclear explosions that were made by mankind, and for a long time was considered the most powerful explosion of the non-nuclear era.

The battle of Messina, or the Messina operation, continued from 7 to 14 on June 1917 of the year and ended successfully for the British army, which managed to press the German forces, improving their positions. The battle took place in Flanders, near a village called Mecen, during which British troops tried to cut off the 15-kilometer overhang of the German troops. The British, who realized that they couldn’t break through the defenses of the Germans with conventional attacks, began preparations for the operation back in the 1915 year, 15 months before it began. During this time period, they managed to lay more than 20 giant tunnels under the second level of groundwater in the blue clay formation. This engineering work was preceded by serious geodetic work and the study of the soil in this sector of the front. 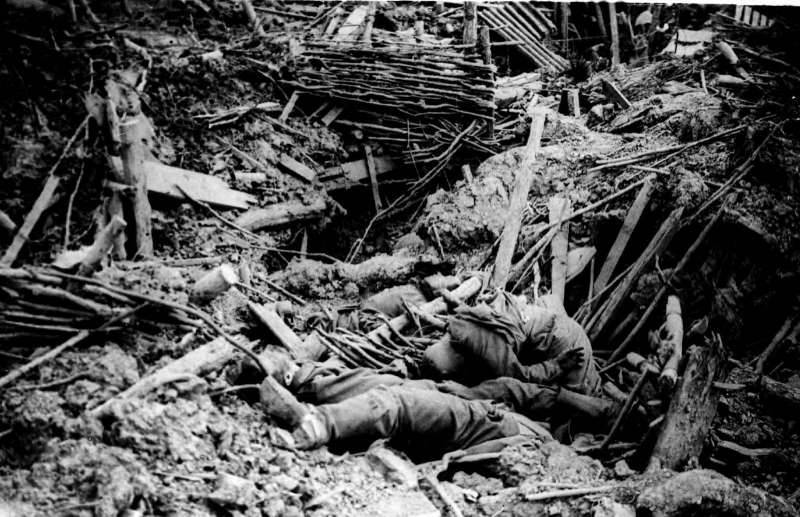 The British mined all the tunnels dug in, and the excavated soil was carefully masked so that the Germans could not notice it, especially during aerial reconnaissance. English subterranean galleries started around 400 meters behind their defense lines. Since the German positions in this sector of the front were going up to heights, the tunnels were defended by German troops at a depth reaching 25-36 meters, and in some places to 50 meters. The total length of these underground utilities was more than 7300 meters, while at the end of the tunnels the British laid about 600 tons of explosives, they used ammonite. Still, the Germans managed to unravel the plan of the British strategists, but they mistakenly believed that the tunnels are located at a depth of 18 meters, so they managed to destroy only two mine galleries, still 22 remained intact. 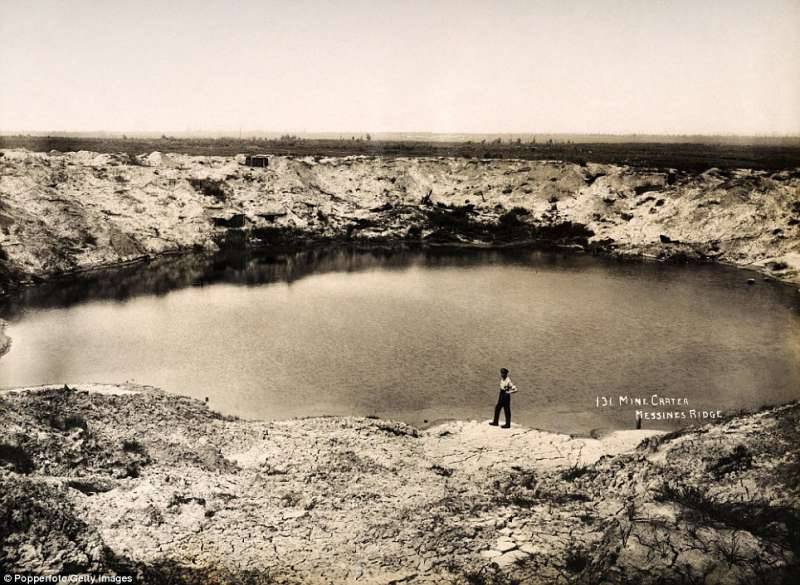 The offensive of the British troops on this sector of the front was preceded by a powerful artillery preparation, which began on May 28. And 7 June with an interval of approximately 30 seconds was carried out undermining 19 mine galleries. As a result of these explosions, the first and second lines of the Germans' trenches were destroyed, and huge craters appeared at the site of the fortifications. The largest crater is considered to be the “crater of a lonely tree”, whose diameter was up to 80 meters, and its depth reached 27 meters. As a result of these underground explosions, about 10 thousands of German soldiers died, another 7200 soldiers and 145 officers of the German army were captured, being demoralized and unable to offer serious resistance. Craters from those terrible explosions survived to this day, many of them have become artificial ponds.

In fact, the explosion near the village of Mesin was not a single, it was a series of explosions that led to the collapse of the front line of defense of the German troops. And if in this case such explosions could be justified by military necessity, then in December of that year the largest explosion of the pre-nuclear era shook the peaceful port city of Halifax. The transport vessel “Mont Blanc” that exploded off the coast was full of explosives. On board were about 2300 tons of dry and liquid picric acid, 200 tons of TNT, 10 tons of pyroxylin and 35 tons of benzene in barrels. 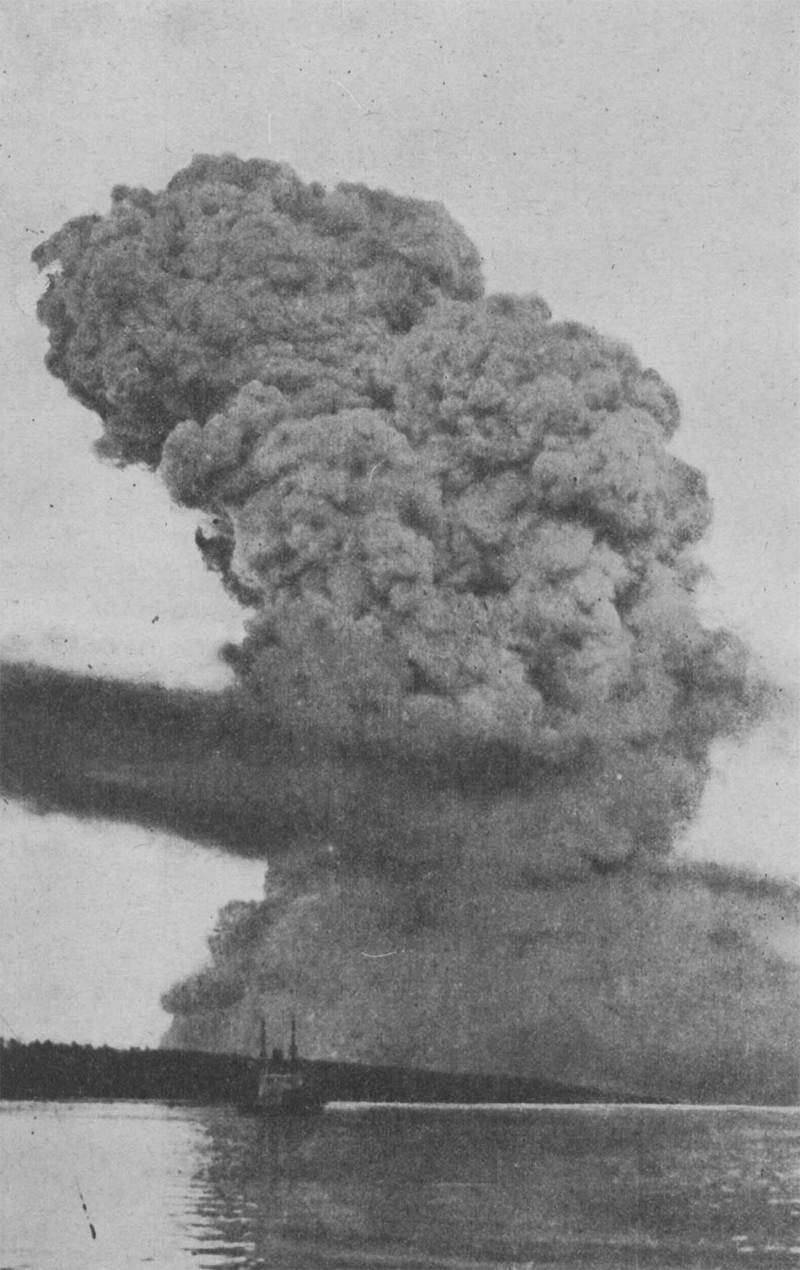 Built in 1899, the auxiliary transport "Mont Blanc" could transport up to 3121 tons of cargo. The ship was built in England, but belonged to a French shipping company. The explosive was loaded aboard 25 on November 1917 of the year in the port of New York, the destination of the ship was France - the port of Bordeaux. An intermediate point on the transport route was Canadian Halifax, where the formation of convoys sent across the Atlantic took place.

"Mont Blanc" appeared on the outer raid of Halifax on the evening of December 5 1917. The next morning, at about 7 in the morning, the ship began to enter the port. At the same time, the ship Imo, belonging to Norway, left the port. When the ships got closer, both captains began to make risky maneuvers, which eventually led to the fact that Imo rammed the Mont Blanc into the starboard. As a result of the impact, several barrels containing benzene broke, and their contents spread over the transport. The captain of the steamer "Imo" reversed and managed to free his ship and leave safely. At the same time, when uncoupling two vessels as a result of friction of metal on metal, a sheaf of sparks arose, which ignited the benzene spreading along the “Mont Blanc”. 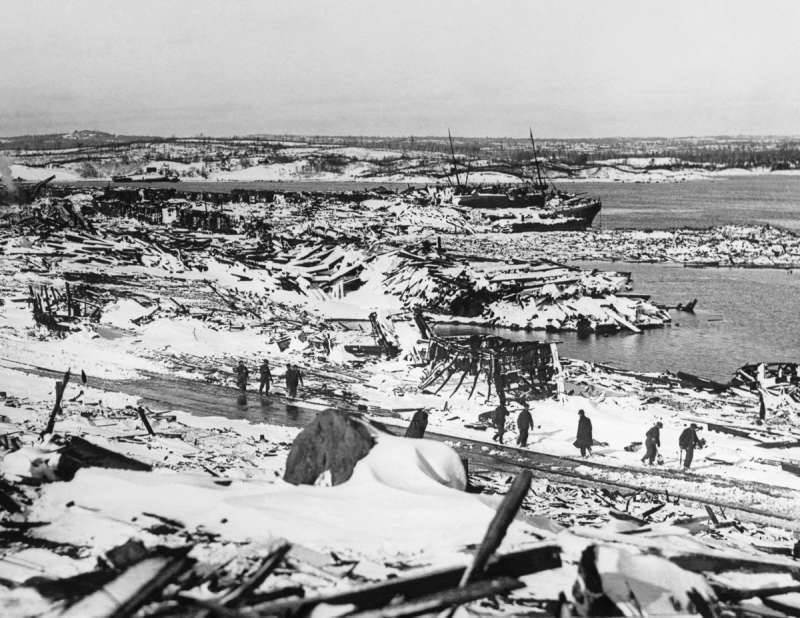 Knowing about the nature of the cargo on the ship, the captain of the "Mont Blanc" Le Medek gave the order to the crew to leave the ship. It was not necessary to persuade the sailors for a long time, all the crew members safely reached the shore, leaving the deadly cargo to themselves. As a result, the burning transport began to drift towards the coast, eventually leaning on a wooden pier in Richmond, one of the areas of Halifax. About the nature of the cargo on board the "Mont Blanc" in this Canadian city knew a few people. For this reason, virtually the entire population of a small town clung to the windows in the hope of better viewing the rare sight that represented the burning ship. On both sides of the strait, around which the city spread, onlookers began to gather.

A monstrous blast of power in 9 hours 6 minutes of the morning put an end to this “presentation”. The strength of the explosion is evidenced by the fact that the 100-kilogram piece of the ship’s frame was later found in the forest at a distance of 19 kilometers from the epicenter of the explosion, and the Niob cruiser 11 thousand tons displaced in the harbor cast the ship Kurak ashore . In the city of Truro, which was located 30 miles from Halifax, a shock wave smashed glass. In the district of 60 for miles in all the churches, the bells spontaneously rang from the blast wave. 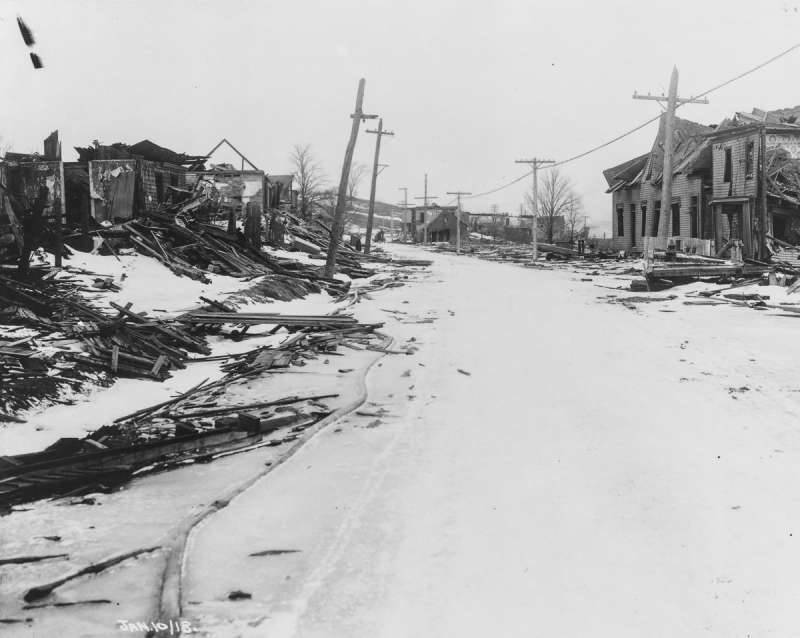 According to official statistics, the 1963 man died as a result of the explosion in Halifax, and the order of the 2000 man was missing. Many of the wounded were frozen in the wreckage, as the temperature dropped sharply the next day, and a strong storm began. Someone just burned alive, as fires started all over the city, which burned for several days. In the three schools of the city from 500 students, only 11 survived. About 9 thousands of people were injured, including 500 lost their sight after being hit by shattered window glass. At the same time, the northern part of the city, the Richmond area, was almost completely obliterated from the explosion. In total, 1600 buildings were completely destroyed in Halifax, 12 thousands more were severely damaged, at least 25 thousands people lost their homes.

The explosion on the island of Helgoland

The Second World War gave the world a string of powerful new non-nuclear explosions. Most of them related to the death of battleships and aircraft carriers of the warring parties. The point in the series of these sea tragedies was set by the explosion of the Japanese battleship Yamato 7 on April 1945, when the main-caliber cellar detonated, the explosion was equivalent to 500 tons of trotyl. Not without tragedies like the one that occurred in Halifax. 17 July 1944 in the United States in the port city of Port Chicago, an explosion occurred while loading ammunition on board vehicles. The mushroom cloud rose to a height of about three kilometers, the power of the explosion was about 2 kt in TNT equivalent, which was comparable to the port explosion in Halifax 6 December 1917 of the year, whose power was estimated at 3 kt. 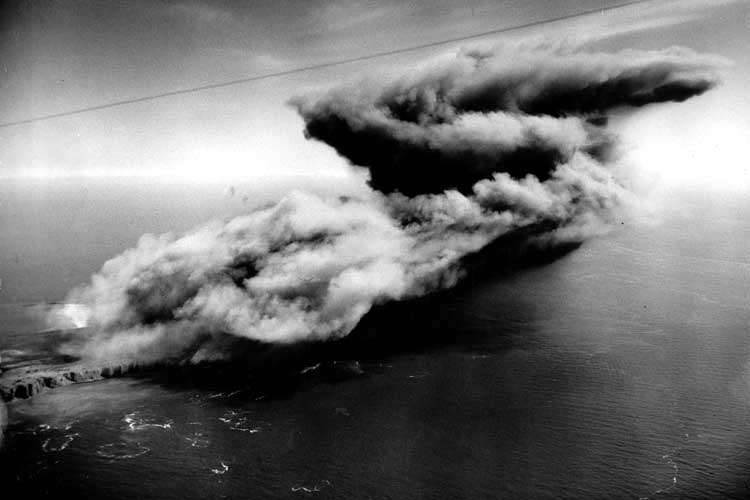 However, even these explosions faded before the one that was created by human hands on the German island of Helgoland in the North Sea. This explosion was a real echo of the war, it changed the face of the island forever, but it didn’t take a single human life, as it was planned. After the defeat of Germany in the Second World War, the entire population of the island was evacuated, and the British decided to destroy all the remaining fortifications of the submarine base of the Third Reich, as well as conduct seismic studies.

Along the way, they solved the problem with the disposal of a large amount of ammunition that remained with them after the end of the war. The explosion was made on 18 on April 1947. At this point, thousands of torpedo warheads, 4 thousands of deep-water bombs and 9 thousand grenades of various calibers, a total of 91 tons of various explosives, were brought to the island. The undermining of these munitions, which had been preparing for several weeks, formed a mushroom cloud that had risen to the sky to a height of 6700 meters. The explosion was so powerful that it was able to register even in Sicily. The explosion on the island of Helgoland was registered in the Guinness Book of Records as the most powerful non-nuclear explosion in stories. The detonation in the explosion released energy, which was comparable to the atomic bomb power 1 / 3, which the Americans dropped on Hiroshima. 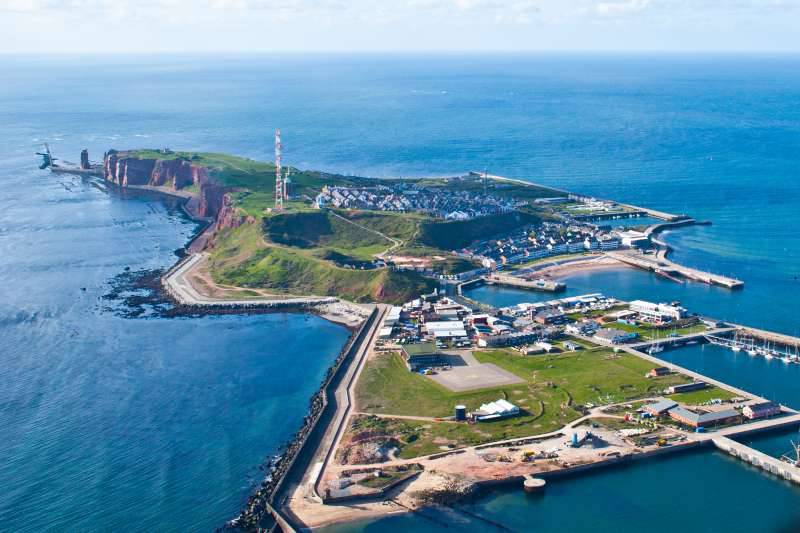 The British had planned that the island would be completely destroyed as a result of the explosion, but it survived. But its shape has been changed forever. The entire southern part of the island Helgoland has become a huge crater, which today is an attractive destination for tourists. After the explosion, the British used the island as a testing ground for training bombings for several more years, returning it to Germany in the 1950s. Practical Germans were able to rebuild the island in a few years, opening for it a new stage of cultural and tourist life.

The largest in the history of non-nuclear explosions include a series of tests as part of the operation of the US Navy, codenamed Sailor Hat (literally a sailor's hat). This is a series of tests that were conducted in 1965 on the island of Kahoolava (Hawaii). The purpose of the test was to determine the impact of the shock wave of high-power explosions on warships and equipment installed on them. As part of the operation, research was also conducted in the field of underwater acoustics, seismology, meteorology, and radio wave propagation. 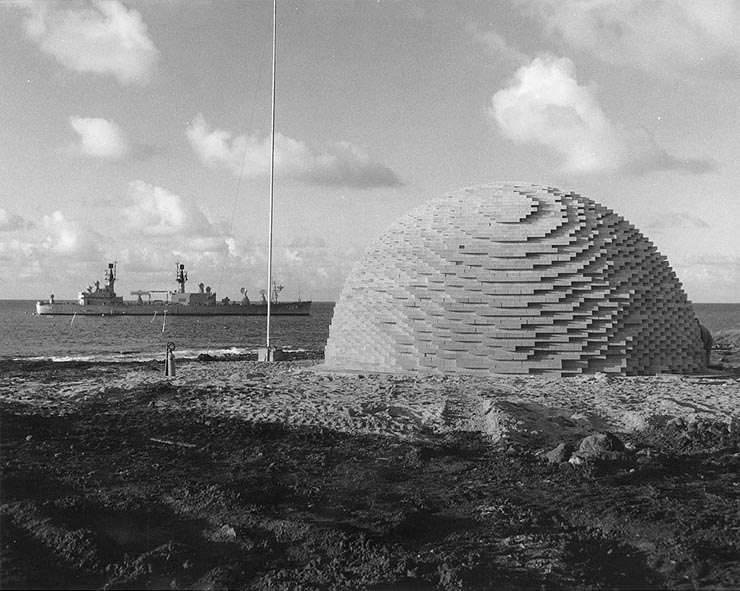 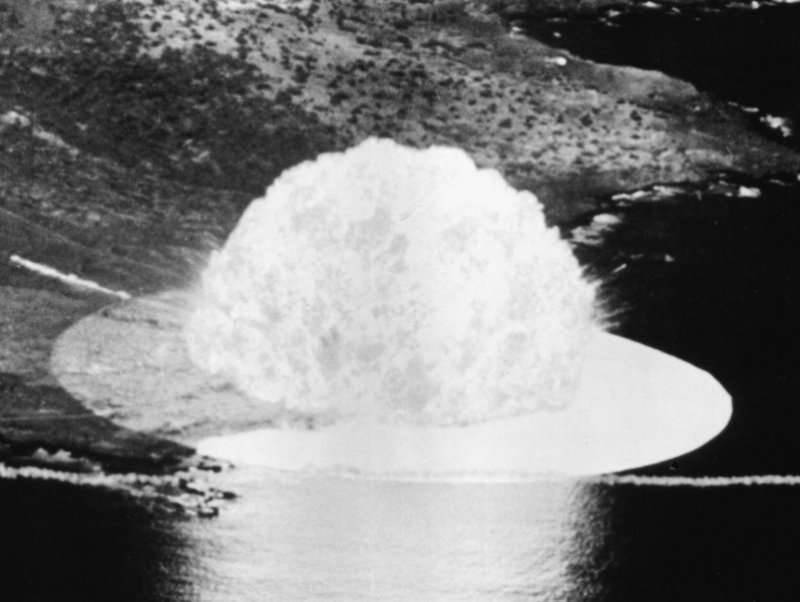 The impact of the explosions on the internal equipment of the ships was recorded on special high-speed cameras. The tests carried out showed that the strength of the explosions was enough to destroy the steel mounts and throw off rather heavy radar equipment from its pedestals. But, despite the seriousness of the damage, the warships remained afloat. In addition, during the tests, the blast wave destroyed two observational airships.

Ctrl Enter
Noticed oshЫbku Highlight text and press. Ctrl + Enter
We are
The main patron of the cold warTaming the devil
Military Reviewin Yandex News
Military Reviewin Google News
23 comments
Information
Dear reader, to leave comments on the publication, you must sign in.