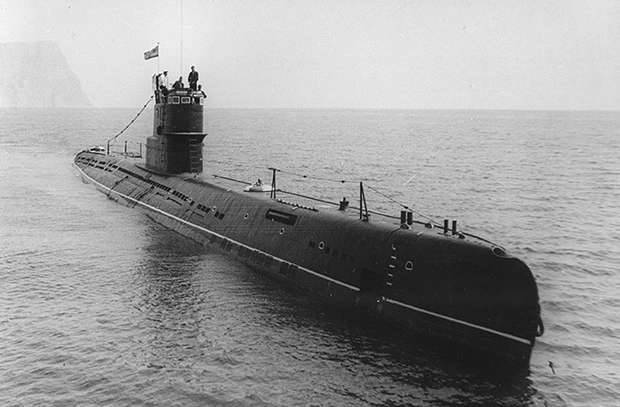 March 13, 1950 laid the lead submarine of project 613: the most massive Russian submarine fleet

The experience of the Great Patriotic War clearly showed the enormous role of submarines in combat operations on the seas and in the oceans. The Soviet Union entered the war with a total of 218 submarines in the Workers 'and Peasants' Red Fleet - almost half the size of Germany’s submarine forces in the 1943 year, during its heyday: 432 boats. A new outbreak soon after the Victory, this time the “cold” war demanded a sharp increase in the number of submarines also because they constituted a significant part of the shock forces of Russia’s main geopolitical opponent, the United States.

But our country, exhausted and exsanguinated by the hardest war, could quickly pump up “underwater muscles” in one way: taking an example from a defeated enemy. It was no secret to anyone that in the best years the German shipbuilding industry launched submarines for almost one in two days. It means that it was possible and necessary to take advantage of this experience and set up our own production of submarines by the flow method. This meant, among other things, the need to carefully study - and possibly modify to fit your needs - and the design of the German submarines.

Most likely, it was these considerations that led the command of the Navy when, at the end of 1944, it ordered to suspend work on the new project of the Soviet middle submarine, which had the 608 cipher, and analyze the captured boats of series VII and XXI. It took a year and a half: only in January of the 1946-th, the Main Committee of the Soviet Navy approved a new technical project for the development of the boat - so the 613 project was born. Two years later, 15 in August 1948, the technical design of the new submarine was approved by the government, and 13 in March 1950 of the year at the Krasnoye Sormovo plant in Gorky laid the first diesel-electric submarine of the 613 project - C-80 (order 801). Seven months later, 21 of October, three quarters of the finished boat was launched and set to the extension wall, and on November 1 the C-80 came to Baku, where after upgrading from December 31 of the year 1950 on April 26 of the year, the test was held . Finally, on July 1951, the boat made a control deep-sea dive, and on December 9, the state commission signed the acceptance certificate. By this time, at the Chernomorsky shipbuilding plant in Nikolaev, they had already finished building one more submarine of the 2 project - C-613. It was laid on 61 on April 11, launched on July 1950, put on 22 on January 12, then was transferred to Sevastopol and 1951 on May 24.

All in all history 613 project for seven years - from 1950 to 1957 year - was built 215 submarines. This made the submarines of this series the most massive in the Soviet fleet in the history of its existence. However, there could be more boats: according to the original plan, they were going to build as many 340 units! But during the time when the first hundred boats were being built, new, more modern projects appeared, which were quickly brought to mass production, and as a result, the 613 project was limited to two hundred small boats. 116 of them built the Gorky plant "Red Sormovo", 72 - plant in Nikolaev, 16 - Baltic plant named after Sergo Ordzhonikidze in Leningrad and 11 - Plant named after Lenin Komsomol in Komsomolsk-on-Amur.

In fact, during the years of the most active construction of 613 submarines, the Soviet fleet received one new submarine of this type every five days! And it was possible to achieve such unprecedented production rates due to substantial rationalization and technologization of the construction of boats. For the first time in the domestic practice in the construction of submarines, the flow-sectional method of construction, automatic welding and radiographic inspection of welds were widely used. In addition, the construction speed was also affected by the fact that the developers of the 613 project, together with the production workers, achieved maximum unification of parts of products and materials, applied aggregability (i.e., geometric and functional interchangeability of individual elements and components) to the assembly of mechanisms and devices and managed to practically get rid of traditional at the time of manual fitting of elements during installation. 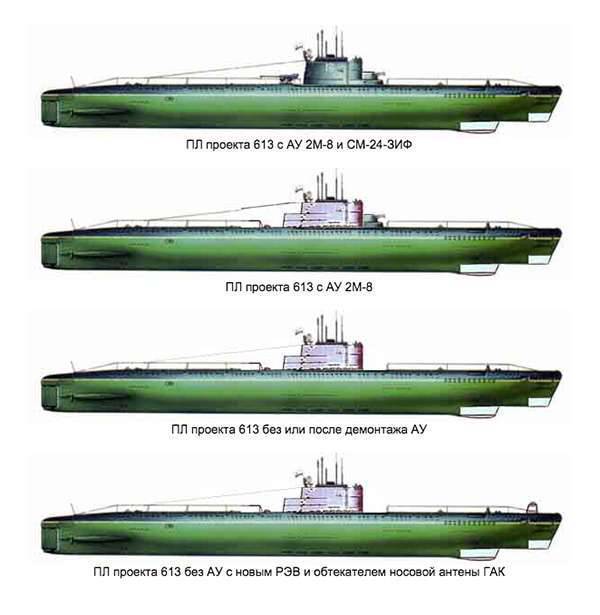 Modifications of the submarines of the project 613. Photo: www.deepstorm.ru

Is it any wonder after this that in the shortest possible time the Soviet fleet not only managed to build up “underwater muscles”, but also got a boat at its disposal, which enjoyed good fame among submariners. Suffice it to say that only two of the 215 submarines were lost - the rarest result for any fleet of the world!

What was the "six hundred and thirteenth"? These were simple, one might even say, somewhat primitive submarines of the classical double-hulled construction, which had three shelter compartments, ten tanks of the main ballast, two diesel engines with an 2000 hp power. each and two electric motors 1350 hp The diesel engines accelerated the boat up to the speed of 18,5 knots and allowed it to pass in surface position up to 8500 miles. Under the electric motors of the boat project 613 could go submerged with a maximum speed 13,1 node, and the range of the battery was 352 miles. All boats were armed with six torpedo tubes of caliber 533 mm - four bow and two fodder. By the way, the torpedoes with which the "six hundred and thirteenth" armed themselves could have had nuclear warheads. In addition, the first series of boats had artillery armament: the obligatory 25-mm twin 2М-8 anti-aircraft machine gun in the front fencing of the wheelhouse, and some of them also the universal paired SM-24-mm plant of the caliber 57 mm, which was located behind the wheelhouse. But gradually they abandoned the guns and artillery machines, which made it possible to reduce the crew from 53 to 52 people (including 10 officers), and, most importantly, increase the underwater speed at the expense of better streamlining of the hull.

Soviet submariners of the 613 submariner earned genuine respect not only for their reliability and ease of handling and control, but also for their unpretentiousness. These submarines were not the best in the world, and were not even the best in Russia, but they allowed the submarine fleet to be quickly restored and done so without making inhuman efforts and not diverting human resources to overly complex training of personnel. In this sense, the “six hundred and thirteenth” was very similar to the Mosin rifle “trilinear”: although it was not the best in the world, but it best matched the requirements and capabilities of the Russian army, due to which it lasted almost a century in service.

And it was the “six hundred and thirteenth” that became the first Russian submarines to enter the international market. In 1954, working drawings and technical documentation for the 613 project submarines were transferred to China, for which the first three boats of the Chinese series were built in the Soviet Union, then transported to the Chinese shipyard in Shanghai and already launched there. In addition, 12 submarines of the 613 project were transferred to Indonesia, 10 to Egypt, four went under the flag of Albania, served as much in the Navy of the DPRK and Poland, three in Syria, two in Bulgaria, and one in Cuba. In NATO, these most famous Soviet submarines deserved the codename "Whiskey" - which, oddly enough, also emphasized their mass character and prevalence. Yes, and the head of the Western sailors, unexpectedly confronted with the massive presence of Russian submarines in the oceans, sore from these meetings just as good ...