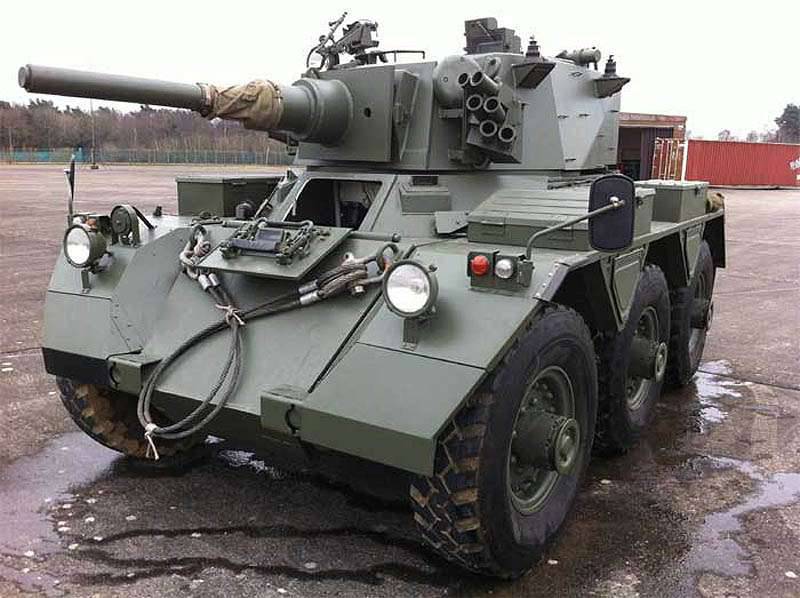 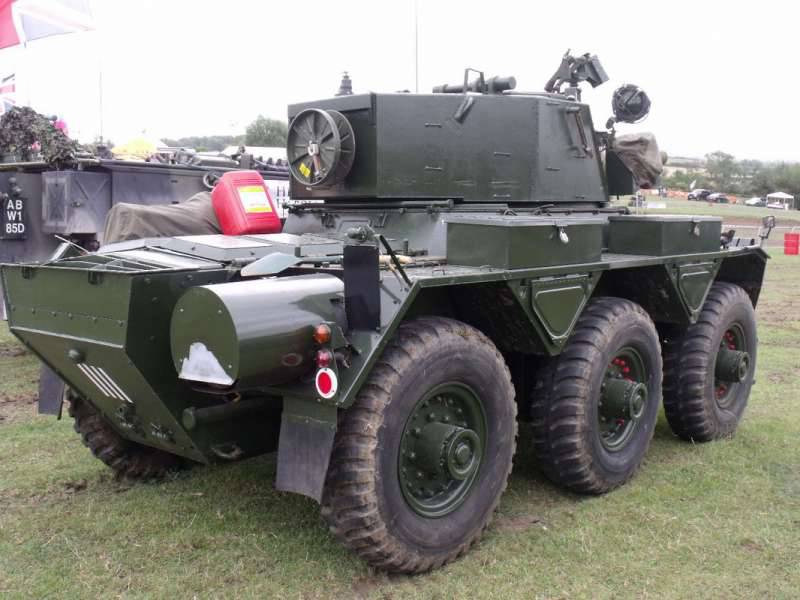 In January, 1946, the British army issued a requirement for a new armored vehicle, which was to replace the armored vehicles Daimler MkII 4x4 and AEC MkIII 4x4, developed during the Second World War.

As originally assumed, the FV601 (A) was supposed to have a crew of four people and should be armed with an 40-mm gun equipped with a Littlejohn adapter to increase the initial velocity of the projectile. But in February, the 1948 of the year, it was decided that this gun was not powerful enough, and therefore the weapons design bureau started the development of the new L76 5-mm cannon, which was developed right up to the 1953 of the year.

In 1947, Alvis Limited in Coventry was awarded a contract for the manufacture of two prototypes of FV601, which were built only in 1953. The first mockup with the 40-mm gun was made in 1948 year.

Since Saracen was urgently needed for the operation in Malaya, it was decided to concentrate on this machine and therefore the manufacture of six pre-production machines FV601 (B) was transferred to Crossley Motors from Stockport.

The production of the FV601 machines (B) was completed in 1955, they differed from the prototypes in a slightly different shape of the turret, as well as other observation equipment and other design of the commander’s and gunner’s hatches.

Production of the Saladin armored vehicle was approved in 1956, after which production at the Alvis plant in Coventry began in 1958, and the first deliveries of the British army were made the following year. Production continued until 1972; A total of 1177 machines were manufactured.

This vehicle in the British army was subsequently replaced by the Scorpion CVR (T) tracked vehicle, which was armed with a new lightweight version of the Saladin 76-mm cannon, which had the designation L23. The Saladin armored vehicle has the official designation FV601 (C) Armored Car (Alvis Saladin Mk 2 6x6).

Production of all armored vehicles of the FV600 6x6 series was carried out at the plant of Alvis Vehicles in Coventry, which was closed in 1999 year. In 2002, Alvis merged with Vickers Defense Systems, resulting in a company with a new name Alvis Vickers Limited.

In 2004, Alvis Vickers joined the defense giant BAE Systems. After this, the only armored combat vehicle factory in Newcastle upon Tyne remained in the United Kingdom.

In the end, after the production of the Terrier’s engineering vehicle for the British Army, this plant was sold to Pearson Engineering. 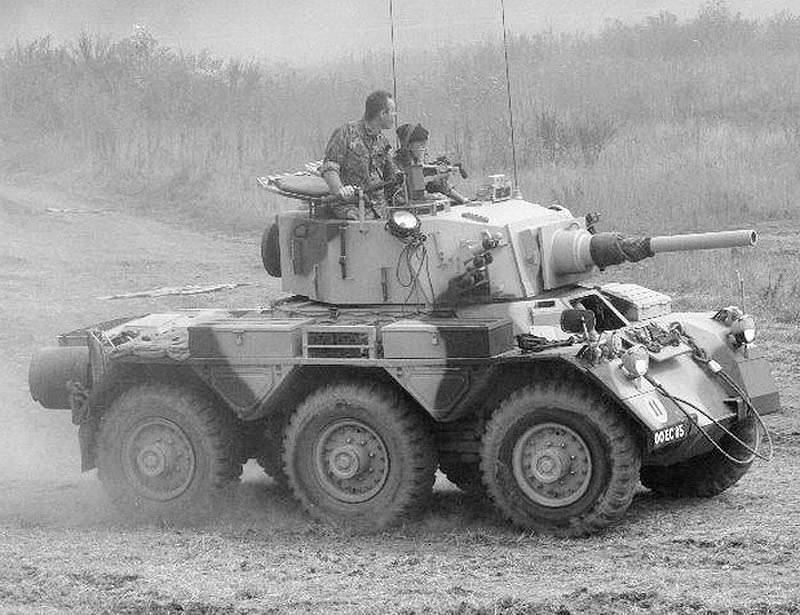 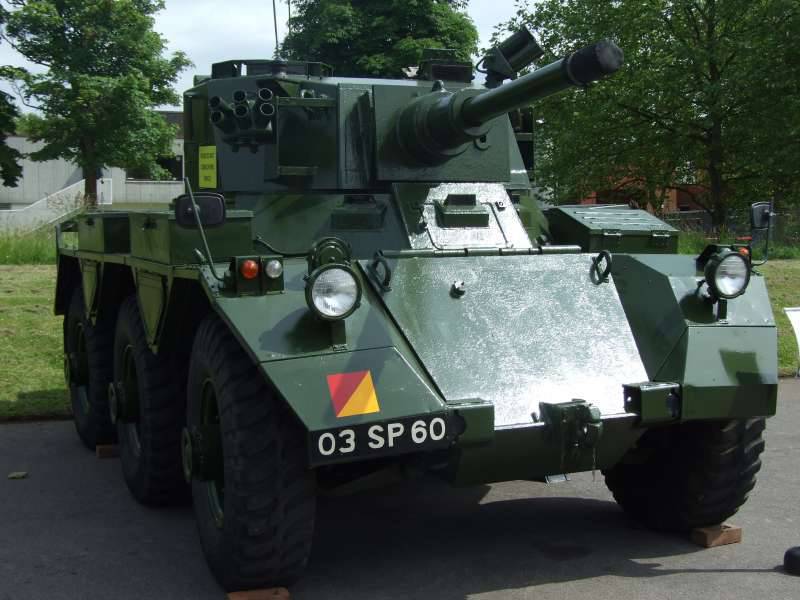 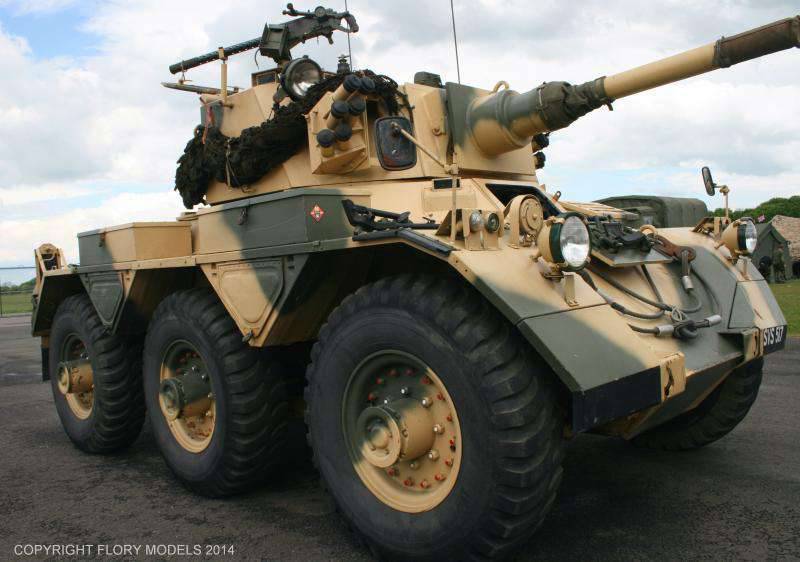 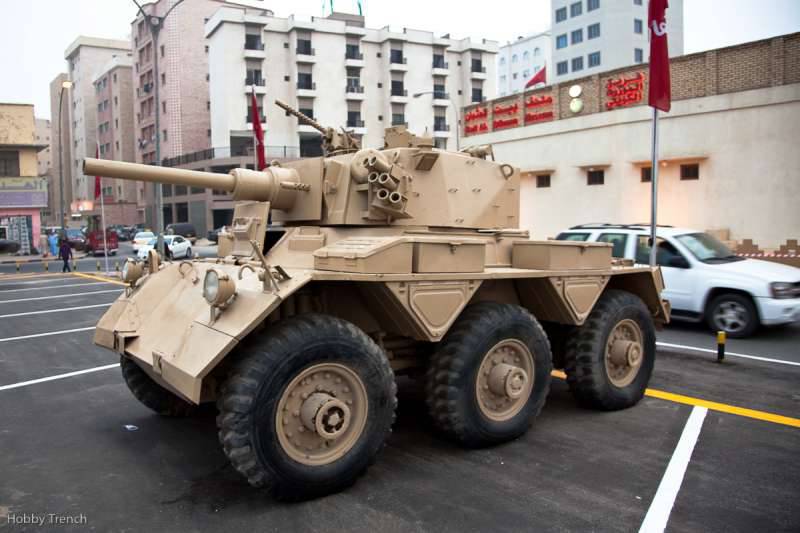 Saladin’s all-welded armored vehicle body is divided into three compartments: the driver’s compartment in front, the combat compartment in the center and the power unit in the rear. The hull and turret are all-welded, made of armored steel and have the highest level of protection in a frontal arc.

The driver is located in the front and has a one-piece manhole cover, leaning forward on the frontal sheet to improve visibility. The driver has three daily periscopes, one in the hatch and one on each side of the driver's seat.

The tower is installed in the center of the hull, in it the gunner-gunner is located on the left, and the commander, who also performs the duties of the loader, is on the right; each has a solid manhole cover opening back. The commander has four day periscopes in a circle in front of the hatch and one rotating periscope in the back.

The engine compartment in the rear part of the hull is separated from the habitable compartment by a bulletproof partition and equipped with a fire detection and extinguishing system. The last function is activated by the driver.

The air in the engine compartment is sucked in by two fans through a louvered grill with six slots and then passes through the radiator and out through the grill at the very end of the casing.

The engine is connected to the hydraulic clutch Daimler, and that in turn is connected to the epicyclic gearbox with a preselective inclusion, which transmits power to the transfer case, consisting of a conical and helical gear, including reverse and differential, which allows to get the gear used in both directions.

The suspension of each wheel consists of upper and lower rods, the upper rod is attached to the longitudinal torsion shaft, which, with its splines, enters the pipe, which in turn is fixed to the body. Hydraulic booster steering first and middle wheels.

The design of the Saladin armored vehicle does not provide for the installation of a system for protection against weapons of mass destruction and night vision devices.

The main armament of the Saladin armored vehicle consists of an 76-mm L5A1 cannon with a vertically sliding bolt mechanism and a hydraulic spring-loaded recoil mechanism. 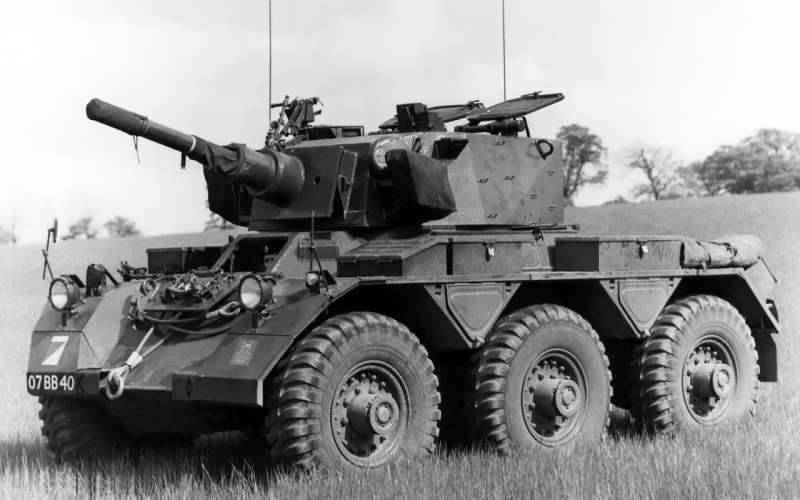 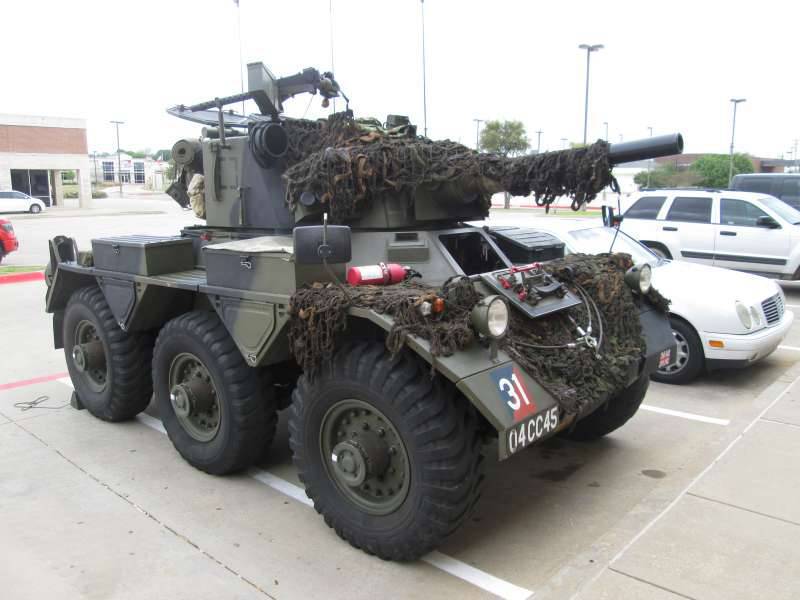 The 7,62-mm machine gun M1919A4 (L3A3 / L3A4) is mounted with the gun coaxially to the left; the same machine gun is installed to the right of the commander's hatch. On the sides of the turret, six 66-mm smoke grenade launchers are installed.

The 42 mm 76 rounds are vertically mounted: 11 between the commander and the shooter, 12 on the left, 11 on the left behind the driver and 8 on the left in the stern.

Modernization of the Saladin armored vehicle

In 1991, it was announced that AF Budge Limited and then Alvis Vehicles Limited had developed a Saladin armored vehicle retrofit kit. The existing gasoline engine was replaced by a diesel engine company Perkins Engines Company 180 MTi horsepower 180 hp.

The retrofit kit was tested in an Asian country with the upgraded Saracen 6x6 armored personnel carrier, while the Stalwart vehicle with the same power unit underwent evaluation tests in the UK.

In May, 1994, Alvis Vehicles announced that it had received a contract worth 10 million dollars to supply retrofit kits for Saladin, Saracen and Ferret from an unnamed Asian country, but most likely Indonesia. The delivery of the kits has been completed and BAE Systems no longer offers them on the market. 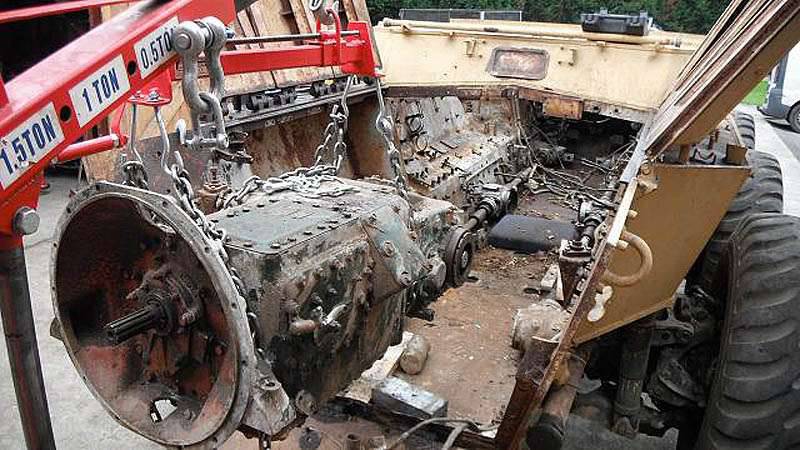 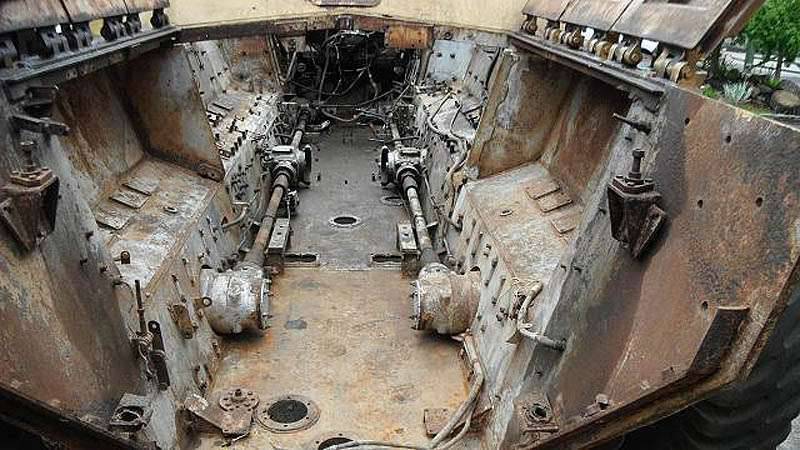 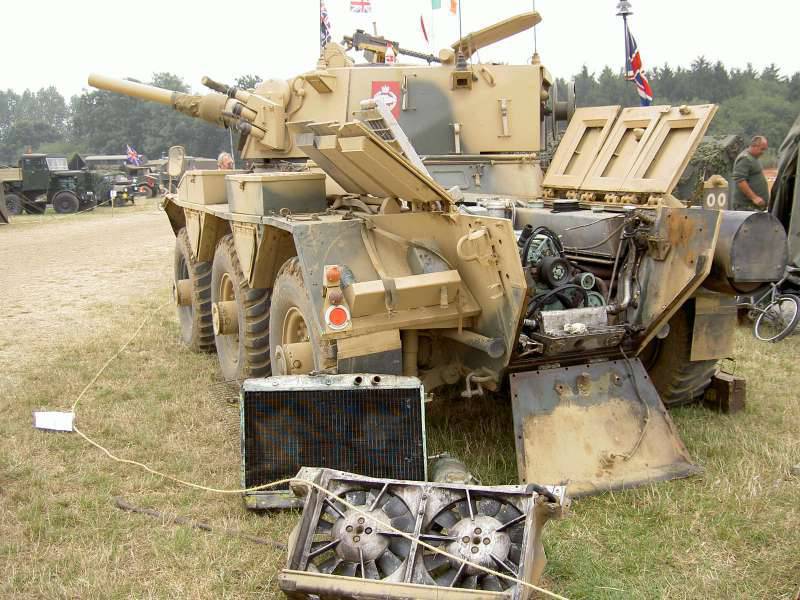 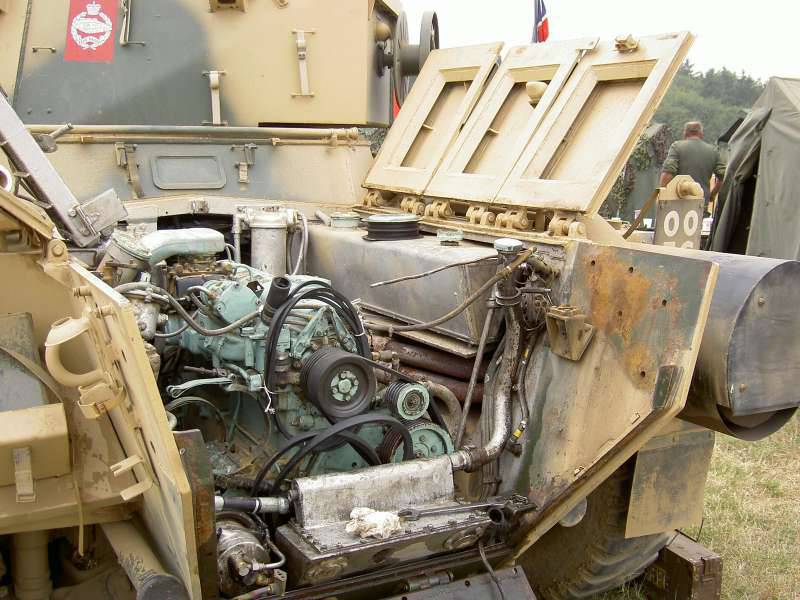 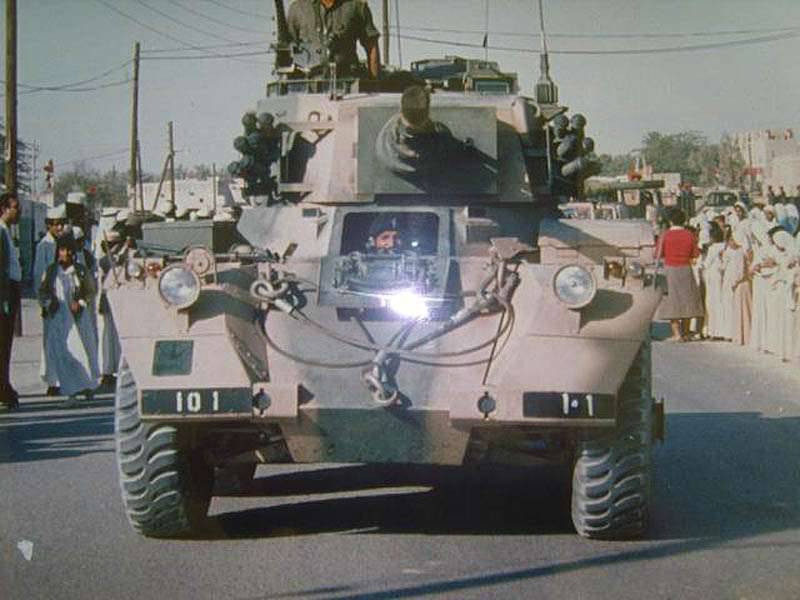 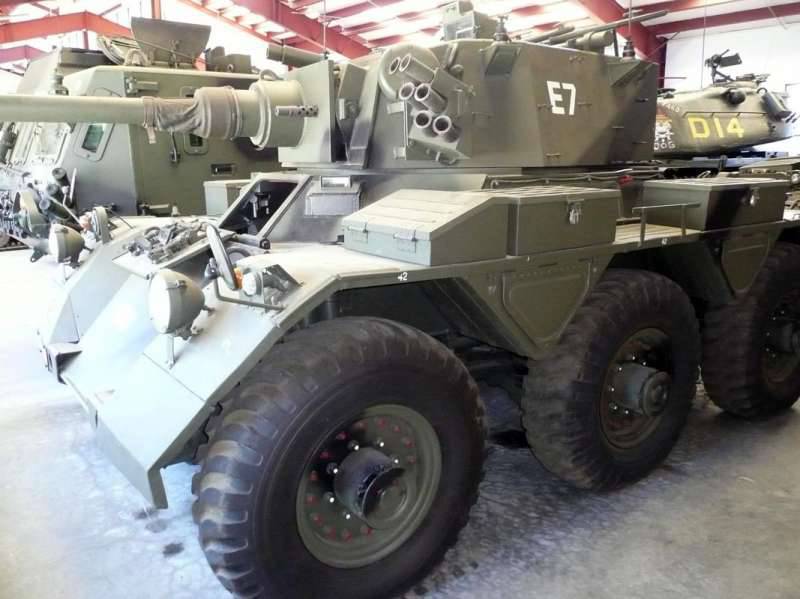 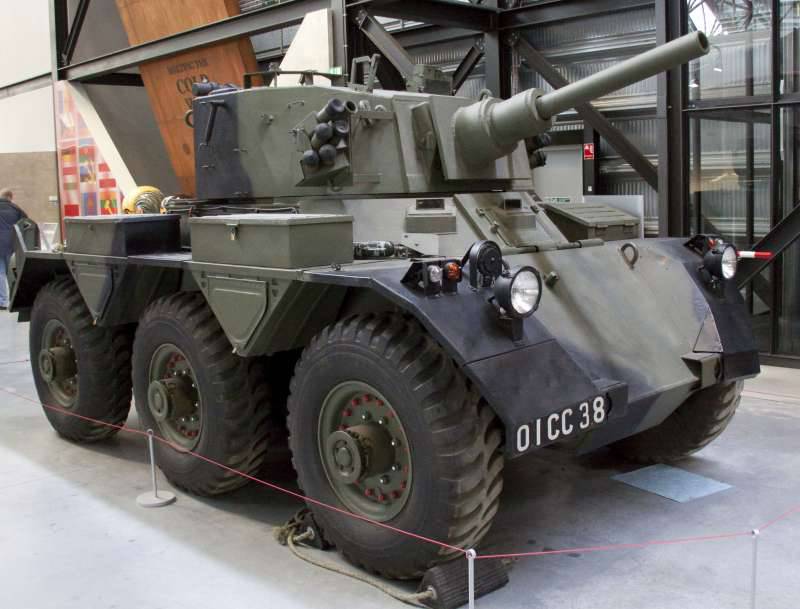 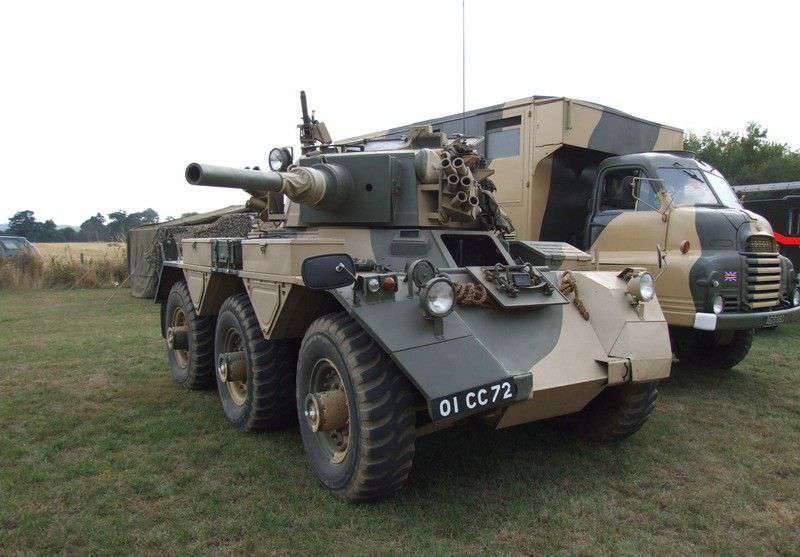 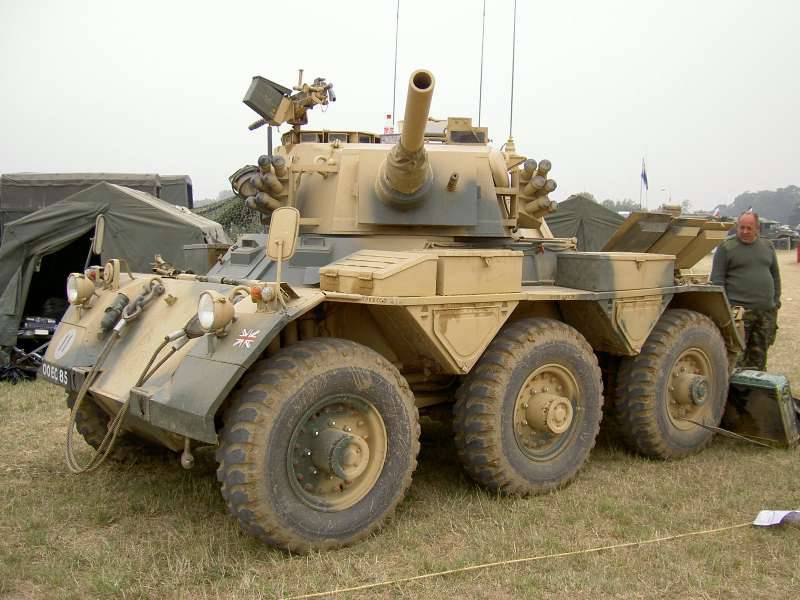