The Fifth Battle of the Isonzo

100 years ago, 11 March 1916, in the Alps, the Italian army resumed attacks on the positions of the Austro-Hungarian troops. This battle went into history as the Fifth Battle of the Isonzo. Like everyone else, this one also ended in failure. The Italians went on the offensive without serious preparation, and their attacks broke against the strong defense of the enemy. The Italians launched an offensive under pressure from the Allies on the Entente, in order, like the Russian army (Naroch), to divert the German army from Verdun.

The operation began with artillery preparation throughout the front, but due to bad weather conditions, the artillery fire was ineffective. In some areas, the Austrians themselves launched a counterattack, and as a result, the Italians, having suffered heavy losses, were forced to retreat to their original positions.

The 1915 campaign of the year posed a number of serious problems for the Italian army. Firstly, it was a problem in the main mountain theater. In the conditions of mountains and lack of communications it was very difficult to conduct large-scale operations, it was easier for the enemy to build defenses. The onset of winter only worsened the conditions for the conduct of hostilities. Masses of soldiers were in the pouring rain and icy wind in the trenches of the Isonzo and Carso and among the snow-covered fields and rocks of the Alps. At the front there was a lull. A war of this kind and scale was new to Italy. The rules of the war in the mountains had to be developed on the basis of bitter experience.

Secondly, it was necessary to replenish the army, which suffered serious losses during unsuccessful attacks during the 1915 campaign of the year. At the end of November, 1915 was born and sent to school for those born in 1896 (young 19-year-olds), and at the beginning of 1916, the older ages of the territorial militia began to be called upon. This allowed the formation of new parts. By April, the 1916 was organized by the 4 new two-division army corps consisting of 34 regiments, 4 Bersalier and 18 Alpine battalions, 71 territorial militia battalion, 75 local companies and 560 working detachments.

Thirdly, a lot of work was done to improve the material part of the army. The armament of the army increased, especially in the supply of machine guns. Thus, the number of machine-gun platoons increased from 350 in May 1915 to over 1 thousand, plus 11 of horse-gun squadrons and 6 auto-machine-gun platoons. A large number of lost guns (half of all heavy artillery) was replaced by new ones. In addition to 16 new field batteries, 40 batteries of medium calibers, 14 mountain, 400 siege and 36 pack batteries, and 38 anti-aircraft batteries (new) were formed. Part of the guns was removed from the forts and transferred to the front, as were several coastal batteries and sea guns. Increased ammunition production: 3 thousand shells per day for heavy artillery and 30 thousand for field artillery. The country mobilized and created new factories for the production of weapons and ammunition. It was a serious burden for Italy, as the heavy industry was just beginning to be created and it could not be compared with the older, more powerful and modern industry in England, France and Germany.

Italy made a big breakthrough in the development of the air force. At the beginning of the war, Italy had only a germ aviation. In the first year of the war, Italian aviation could do little to help the army because of the imperfection of aircraft and the wide variety of types. By 1916, the situation had improved significantly.

The situation on the Italian front

The Austrian command, completing active offensive operations on the Russian and Balkan fronts, transferred the liberated divisions to the Italian front, increasing the number of troops and artillery. With the onset of cold weather, active hostilities on the entire sector of the front stopped. However, throughout the winter continued artillery fire. In addition, the Italians and Austrians made forays.

There were no serious operations until mid-January 1916, when the Austrians, concentrating large forces, launched an offensive and captured the Italian position between Oslavia and the height of 188. The Italians organized a counter-offensive and repulsed positions. But after 10 days, the Austrian troops again went on the attack and took Oslavius. Then the Italians beat Oslavius ​​again. Since the height of the 188 was left to the Austrians, the Italian High Command ordered the withdrawal of the entire line from Peuma to Oslavia.

The plan of the Italian command for the 1916 campaign of the year was developed at the Allied Conference of the Entente countries in Chantilly 6-9 of December 1915. This plan envisaged an active, powerful, simultaneous offensive by the Entente's armies against the Austro-German forces in the three main battlefields: the Western, the Eastern and the Italian. The offensive is scheduled for May-June.

However, these plans were thwarted by the powerful blow of the German army on the French front (the battle of Verdun). As a result, the new large-scale offensive of the Italian army began prematurely, in March 1916, at the request of the French commander Joffre. This offensive was supposed to prevent the Austro-German command from transferring troops from the Italian front at Verdun, where at that time the French army was waging fierce defensive battles, with difficulty restraining the onslaught of the German forces. 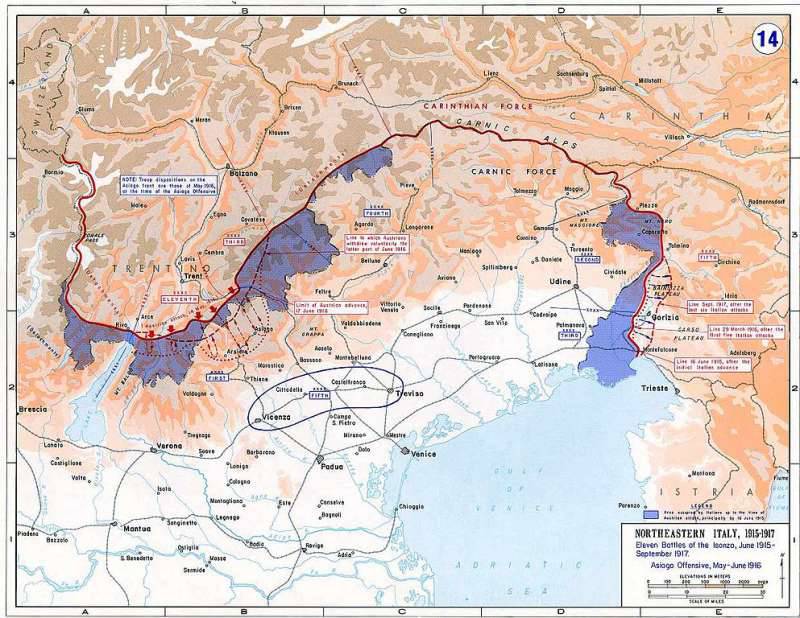 As soon as the Germans launched an offensive against Verdun, the Italian commander-in-chief, Luigi Cadorna, ordered two armies, which occupied the front on the Isonzo, to launch an offensive. The sole purpose of the attack of the Italian army was to prevent "the transfer of enemy forces to other theaters of military operations" and ease the pressure on Verdun. The fifth battle of the Isonzo lasted from 11 March to 29 March 1916 of the year. The 2 Italian army consisted of: 4, 8 and 2 corps and 2 alpine groups; The 3 Army: 6, 11, 13 and 7 corps.

11 March 1916, the Italian artillery opened fire on the entire front line from Plezzo to the sea. However, heavy snowfall and heavy rainfall (depending on the terrain) greatly reduced the capabilities of artillery. The fire was untargeted. The offensive of the 2 Army was delayed by bad weather conditions. Moreover, in the northern part of the front, the Austrian troops in several places themselves went on the attack and squeezed the Italians from Santa Maria and from Mrzli.

March 13 The 21 Division launched an offensive on the front of the 3 Army on one of the peaks of San Michele. After a fierce battle, the Italian soldiers recaptured some positions from the Austrians. South of the 22 division did not succeed. In addition, the strong fire of the Austrian artillery, which used chemical shells, forced the 21 division soldiers to leave the captured trenches.

Fighting also took place on the sections of Oslavia, Peuma, Podgora and Grafenberg (on the right bank of the river, against Goritsy). However, neither the Italians nor the Austrians succeeded. The battle lasted until the end of the month. Both sides suffered heavy losses, storming positions well fortified by nature itself and man, but did not achieve decisive results.

Thus, the fifth battle of the Isonzo was a repetition of previous operations - a poorly prepared attack of powerful fortifications. True, the offensive of the Italian army rendered some assistance to France: together with the Russian Naroch operation, the offensive on the Isonzo distracted for some time the military leadership of the Central Powers from Verdun.

The strategy of the Entente and the Central Powers on 1916 year
"The French Armed Forces will bleed to death in any case - will she keep Verdun or not"
France and England were going to "fight to the last Russian soldier"
Russian soldiers in France
Brilliant victory of the Russian Caucasian army under Erzerum
Keprikeyskoe battle
Assault Erzerum
Defeat of the Turkish Army 3
Trapezund operation
Verdun meat grinder
Verdensky meat grinder. H. 2
Strategic defeat of the German army near Verdun
Naroch operation
Portugal in the First World War