March 19 2016
37
When today we watch TV shots with scenes of violence on the streets of European cities, we somehow forget that at the beginning of the 20th century in Britain it was all the same. It can be said, just overwhelmed by extremism. One after another, mailboxes flashed in the houses, glass was broken in offices and houses, the buildings themselves were also set on fire, although they were mostly empty. But if now migrants are doing all this, then at that time the “colored” people knew their place and didn’t do anything similar. All this was done not by any gangster “Outlaws” (outlawed people) with baseball bats, but by quite law-abiding British ladies, who thus demanded to give them the right to vote in elections! 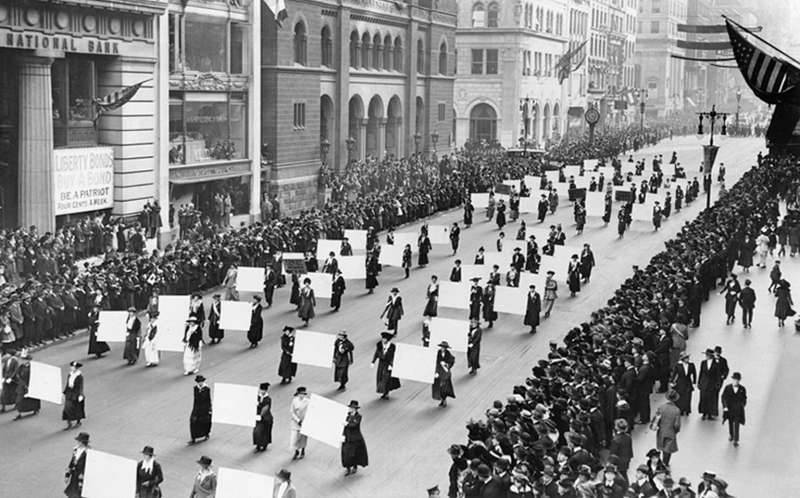 Suffragist Demonstration in London on 1907

Well, for the first time, women declared their desire to get voting rights back in 1792 year. Then Mary Walstonecraft published her article entitled “In Defense of Women's Rights”, where she asserted the right of women to equal pay for work and the right to education. The reason for her speech was the patriarchal legislation of the European states of the time, which provided absolutely no rights for married women, who by law became a de facto appendage to their husband. So it is not surprising that by the year 1890, among the same Englishwomen, there were quite enough women who were very radical-minded and needed to be equalized with men.

In the same year, in the United States, radicalists formed the American National Association of Women Fighting for Electoral Rights. And I must say that the "wind of change" was already felt by many even then. For example, in 1893, women were granted the right to vote in New Zealand, and three years later the same was done in the United States, although only in states like Colorado, Idaho, Utah and Wyoming. In conservative England, the matter stalled, but even there the National Union of Women's Voting Rights was organized in 1897.

It is interesting that among the opponents of the women's movement for equality with men there were not only men themselves, which would be understandable, but also women, who saw in the emancipation the collapse of their habitual way of life. It was believed that a woman is more stupid than a man, that politics, for example, cannot be a worthy female affair: that she can corrupt a woman, and besides, if women become involved in it, then it will destroy all their knightly feelings in them. In addition, the same male politicians feared that gender equality in public life would lead to a decrease in the birth rate and the British Empire would not receive the soldiers for the army! And this was highly relevant, because the Anglo-Boer War had just ended, in which the male population of England suffered significant losses, and the number of women began to significantly exceed the number of men. But, on suffragists (from the English word suffrage - “suffrage”), all these arguments did not work at all! 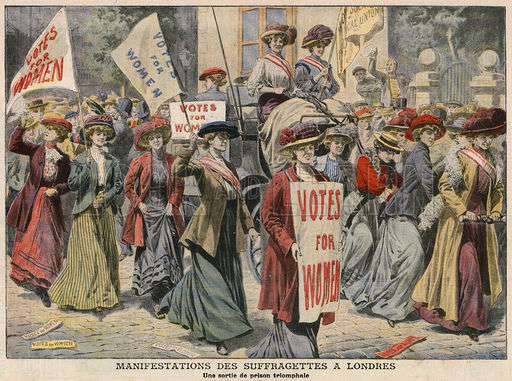 Suffragist in London. Linocut from the journal of the early twentieth century.

In order to draw public attention to the problem of equality of women and men, they organized marches, during which they were engaged not only in carrying banners and slogans, but also ... thrashed the British policemen with their umbrellas. The slogan was put forward: “If politicians do not hear us, a blow must be inflicted on the fact that these gentlemen especially appreciate.” Therefore, the ladies declared a merciless war on golf courses, smash the windows of government offices and smash ... wine cellars.

Sir Winston Churchill himself caused the most ardent hatred of the suffragist women, because he had the imprudence to insult one of them, after she called him a drunk and heartless dork. "I will sober up tomorrow," Churchill replied, "and your legs were as crooked as they will be." For the honor of the offended lady, one man decided to intervene, sympathizing with the suffragist movement, who attacked Churchill with a whip in his hands.

Then, at the train station in Bristol, Churchill met a picket suffragist, and one of them, Teresa Garnett even hit him with a flag pole and loudly exclaimed: “Dirty cattle, an English woman deserves respect!” After that, poor Churchill was thrown stones and pieces of coal. Yes, there was such a page in his turbulent biography, when, when leaving his car at the House of Commons, he was forced to look around so as not to get a headstone from a completely respectable looking Miss or Mrs! And although he was never a coward, he had to get a bodyguard for himself, because the police learned that suffragist decided to kidnap his child. Interestingly, most emancipated ladies - members of the British National Union were offended by the fact that they - the owners of estates have in their submission gardeners and butlers, and they can vote in elections, while they - their employer, with all their high position in society has no such right!

In 1903, Emeline Pankhurst founded the Women's Social and Political Union. Her two daughters, Christabel and Sylvia, played an active role in it. It was the members of this society that received the nickname of suffragists, but they began their activities in England quite peacefully.

The first and truly scandal in which they participated, happened in 1905, when Christabel Pankhurst and Annie Keene, pushing through the guards, broke into the Parliament building and asked the well-known two liberals, Winston Churchill and Edward Gray, why they did not want to give English women have the right to vote ?! They were surprised, looked at each other, but did not answer them. Then the suffragers both took and unfolded a poster with the inscription: "The right to vote for women!" And began to shout out various threats against Churchill and Gray. British shame история before that I did not know! After all, England has always been famous for its tolerant attitude towards opponents, she has always been tolerant of someone else's opinion, especially if it was expressed by a lady, and then suddenly this is ...

Both girls were arrested for hooliganism, an attack committed on the police, and sent to jail. Now suffragists had their own heroines who suffered for the “just cause”, over their representatives “unwarranted violence” was committed, so they got the moral right to respond with “blow to blow”. 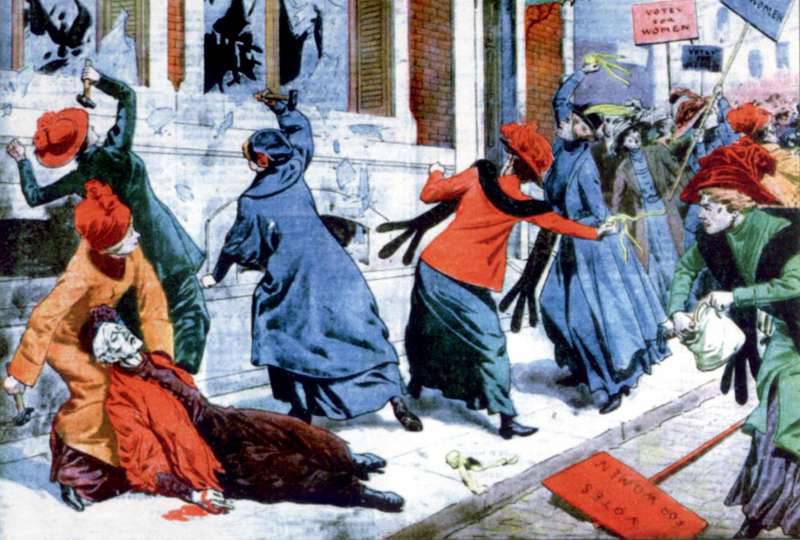 And they answered by burning the churches - after all, the Anglican Church condemned them; literally smashed and plundered Oxford Street, knocking out all the windows and doors on it; they dismantled the pavements so that it became impossible to drive through them and interfered with the work of the repair crews, and then completely chained themselves to the fence of Buckingham Palace, since the royal family also had the imprudence to speak out against giving women the right to vote. 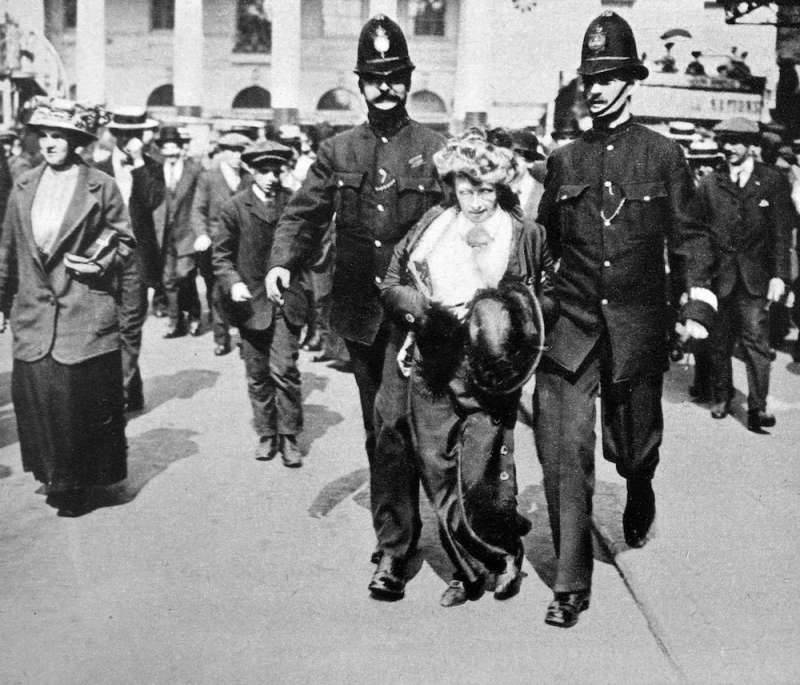 And it should be noted the rare ingenuity that English women showed in their struggle for the right to vote: for example, they swam in boats on the Thames and shouted insults to the government and members of parliament. Many women refused to pay taxes, which for law-abiding England seemed unthinkable. Politicians going to work were attacked, and homemade bombs were thrown at their homes. Throughout the first decade of the 20th century, the suffragist movement was in the center of attention of the scandalous British chronicle. And then the movement had its own martyr!

4 June 1913 of the Year 32-year-old suffragist Emily Wilding Davison climbed over the barrier at Epsom races popular in England and rushed under the racing horse. However, she received very serious injuries, from which she died four days later. 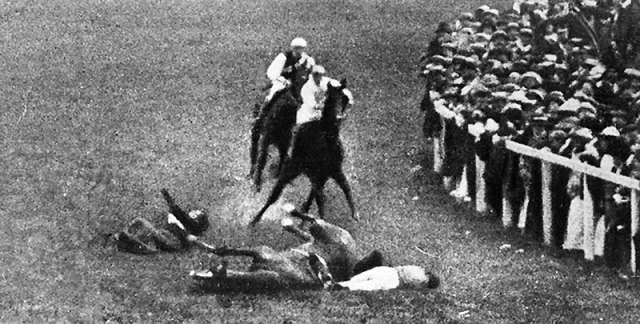 Emily Wilding Davidson dies at the 4 derby of June 1913 of the year.

In the pocket of her coat they found a purple-green-white suffragistic flag. Thus, the motive of her act was evident! Although, in general, he brought almost more harm than good, because after that many men in England asked themselves: “If a highly educated and educated woman does such things, then what can an uncultured and uneducated do? And is it possible to give such a vote? ” 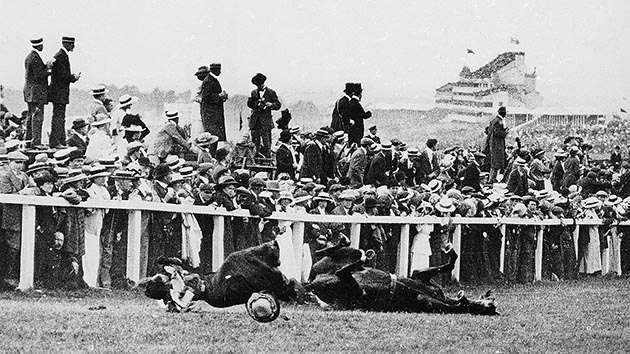 Unique photo: Emily Wilding Davidson under the horse's hooves, but no one has understood anything yet!

It is more than possible that the violence perpetrated by the suffrazzist would take on even greater proportions, but here, one might even say “fortunately”, the First World War began. All their energy members of the Women's Union are now sent to help their country. When England began to lack hands, it was Pankhurst who got from the government for women the right to work in military factories.

Millions of young Englishwomen cut off their long skirts and stood up to the looms to produce the necessary ammunition for the army. Others came to the farms and cowgirls in rubber boots, and with forks in their hands they began to do dirty and heavy men's work. The value of their contribution to the victory of Great Britain is difficult to overestimate. By the way, women in France in those years also did a lot of work, but they managed to get the right to vote only after the Second World War ended! 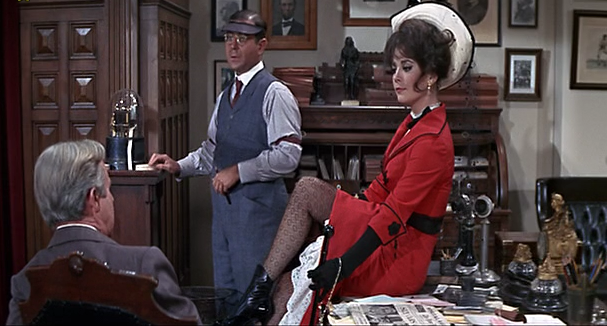 That's how they acted: they could show a leg in an elegant stocking above any propriety, they could smoke men's cigars. Equality is equality, what did you think? A shot from the popular comedy film "Big Race". Starring the charming Natalie Wood.

Any business, as is known, crowns its result. Suffragist movement in England was crowned with a victory in 1918, when the British Parliament gave electoral rights to women, however, not younger than 30 years, and only if they had an education and a certain position in society, that is, the way "without specific occupations" for women the ballot box was still blocked. 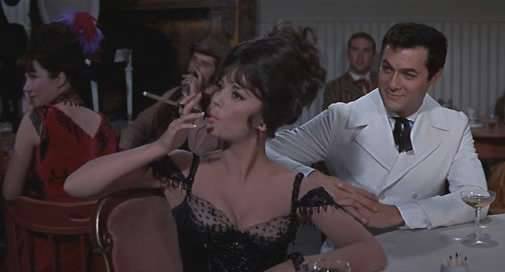 And “The Magnificent Leslie” eventually got married to her ... A still from the movie “Big Races”.

Already in 1919, Nancy Astor became the first British woman elected to Parliament, and in 1928, the electoral qualification for the “weaker half of humanity” was lowered to 21, that is, it became equal to the male! In New Zealand, the first woman in the legislature was elected in 1933 year. On the Continent (as Europeans call the British) the first country to give women voting rights ... Finland became, and she did it in the 1906 year, while still in the Russian Empire!

Do you think the suffragist movement is a thing of the past? No matter how! Women got the right to vote, yes. But equality with men in everything is their new slogan! A few years ago it was very hot in Canada in the summer. And Canadian feminists have demanded the right to ride on the subway with a naked torso. If it is possible in the heat of men, then we women are worse than them? It’s not necessary that we will do that, but we need the right - they claimed they achieved their goal! 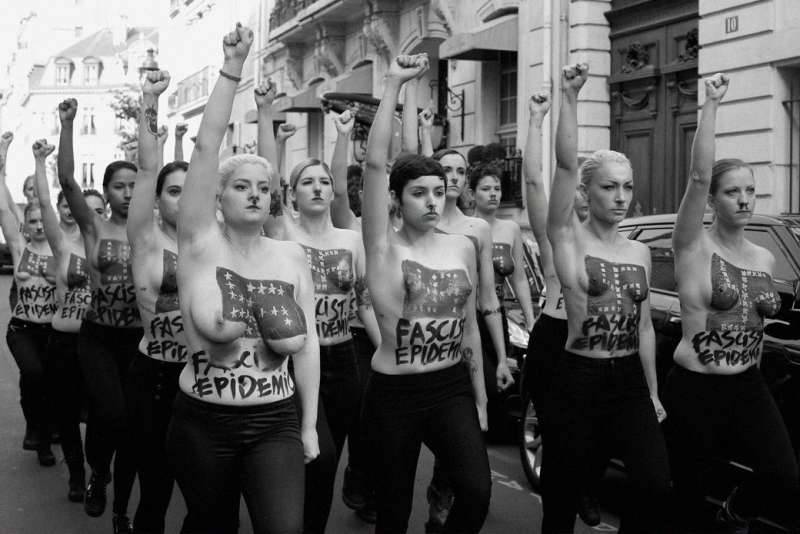 Well, and these ladies in such a strange way oppose the revival of fascism!

In Germany, women’s voting rights were also obtained in 1918, Spaniards - in 1932, French women, Italian and Japanese - in 1945 ... But in a number of other countries this process took decades to complete. Swiss women received voting rights only in 1971, in Jordan - in 1974, but, in countries like Kuwait and Saudi Arabia, they do not have it until now! Well, as for Christabel Pankhurst - perhaps the most famous suffragist of her time, by the decision of the British government in 1936, she was awarded the Order of the British Empire! 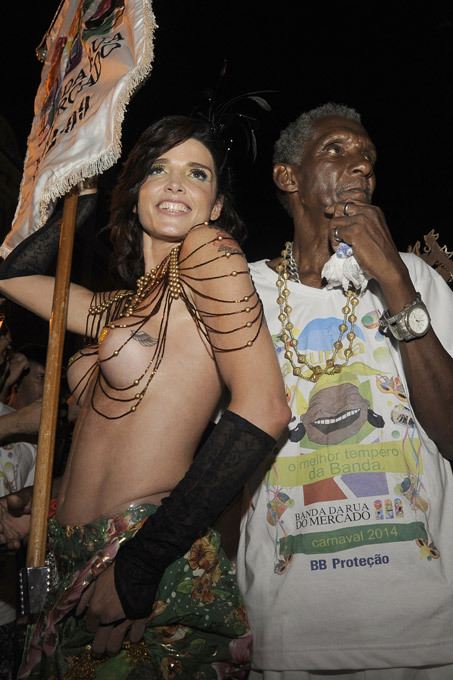