March 3 2016
36
The words of sailor Zheleznyakov, “The Guard is Tired!” Became the phrase-symbol of the dispersal of the Constituent Assembly in January 1918 in the Tauride Palace in St. Petersburg and the end of a short period of revolutionary parliamentary democracy (or chaos) after the October Revolution 7 in November 1917. The tired "guard" changed the dictatorship of the Communist Party, or the "dictatorship of the proletariat," headed by Lenin. 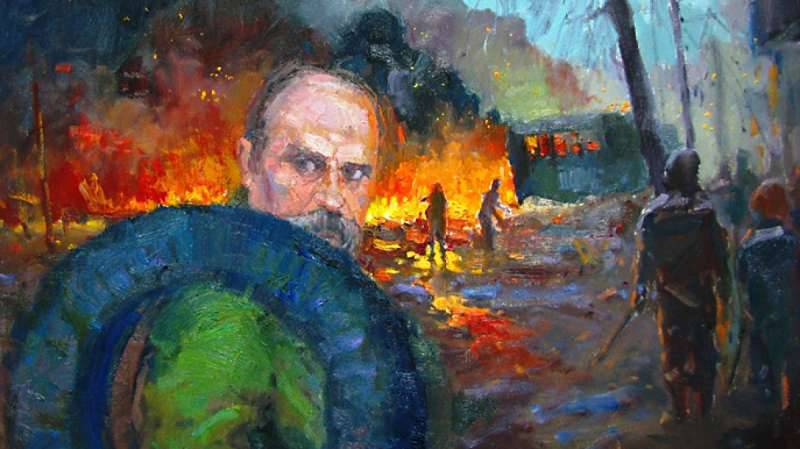 Paraphrasing the great L.N. Tolstoy, it can be said that all revolutions, both left and right, are equally unhappy: here and in the “hydraulic” Nazi-Bandera revolution there is an imminent dispersal of domestic democracy, because this time Washington is tired. Many ukropolitiki talk about cooling Washington to Ukraine, even Andrei Paruby understood this. True, as usual, the State Department continues to lie about the wrong reforms in Banderia, about corruption, but, in fact, he was tired like a sailor Zheleznyakov, tired of looking at the revolutionary-hydraulic mess. (What reforms can be when a mess, even in the Rada?) And removes his guardianship, or guard.

As a result, uncontrollable processes began in Kiev, which some political scientists call a political crisis. President Poroshenko asked Attorney General Shokin and Prime Minister Yatsenyuk to resign. Shokin agreed, but Yatsenyuk did not, citing the fact that the Washington Regional Committee did not endorse this request. However, Poroshenko was not punished by either the State Department or his ambassador Payette: everyone is tired!

Then the “European Coalition” collapsed in the Verkhovna Rada, and a “democratic opposition” from “Batkivshchyna” and “Self-help” was formed, and not only Yatsenyuk, but also President Poroshenko! Chaos is growing, as in the Constituent Assembly in the Tauride Palace!

Kiev political analysts say that the Maidan power is weaker than ever: "It will all get out of control." But how all this will not work, and on the new Maidan, when Washington is tired! Moreover, the State Department Poroshenko does not let go of the free bread: he did not allow Yatsenyuk to resign, and an “oligarchic coup” occurred! This is the fundamental difference between the State Department and the sailor Zheleznyakov: the State Department, headed by Joe Biden, turns out to be much more stupid than this revolutionary Russian sailor, who trusted Lenin.

Many experts already agree that only dictatorship can save Banderia from collapse, but there is still no dictator. Poroshenko said, as recently as February 18, about the possibility of "imposing martial law in the country throughout the territory." However, we need a reason, or sailor Zheleznyakov, and real power resources for this. Neither one nor the other of the President Zits is available in the required quantity, therefore he only thoughtfully speaks of the “martial law”. You can, of course, declare a dictatorship, that is, “martial law”, but this does not mean that you have already introduced it: you have to suffer, deserve it, that is the problem.

Nevertheless, in the nomination "dictator" Poroshenko is still in the lead: for him the APU and the SBU. Yatsenyuk’s iron grip on the premiership says that he is also thinking about dictatorship, which is apparently very much supported by Interior Minister Avakov, with the national-electoral Azov.

Among other nominees here can be noted necktie, ex-Georgian President Saakashvili. Avakov’s adviser, Anton Gerashchenko, noted this rival firm: “Saakashvili said his ambitions are much greater. It seems we are seeing the birth of another candidate for the presidency of Ukraine. ” Indeed, the tie-eater is able to devour many ...

In the nomination "Fuhrer" there are no clearly defined leaders. It is open to all the favorites of the Nazi-Bandera battalion masses. Along with the familiar Dmitro Yarosh, new faces appear, for example, Nikolai Kokhanivsky, the tribunes of the Third Quiet Maidan, in which he loudly said that “Akhmetov is a real separar” for humanitarian aid to Donbas. It is too early to write off the “Radical Right Forces” of the Third Maidan and Kokhanivsky. This is part of the "Right Sector" (without Yarosh), and they were not subjected to any punishment for their Maidan, but they hid in an organized manner. And Kokhanivsky hid, it seems, under house arrest.

Well-known political scientist Mikhail Pogrebinsky believes that the Nazi battalions are out of control: “Foci of opposition to illegal armed groups, which are formally assigned already somewhere - where the National Guard, where the Defense Ministry - start in different places and with different participants. And this is due to the fact that the government is trying to control them. But so far unsuccessfully. ” What does it mean? What is ahead is the “night of the long knives” ...

Sensing the smell of roast, ex-President Viktor Yushchenko suddenly came out of his lethargic sleep, he said in an interview with the media: “I smell the burning tires. And, believe me, this will be the real Third Maidan, and not an imitation that recently took place in the center of Kiev. ” And there is also his friend in the old-old coalition Yulia Tymoshenko. 12 March, when the next session of the Verkhovna Rada will begin its work, the list of nominees for dictators and fuhrers will obviously increase.

If Mongolia compensates Ukraine for the damage caused by Khan Batyi taking Kiev, the official demand of the Verkhovna Rada has already been received by the former headquarters of Genghis Khan, we will see an unprecedented race of dictators in Kiev. It may be worth helping Mongolia to “repair the damage” to see this amazing sight! Then how many candidates for Napoleons in Banderia, we will see!

... However, Washington is tired not only of Banderia, but also of Europe. The United Kingdom, which is closer to the insider information of the State Department, already shoots the EU away from the “super-state” at sea, is fenced off from its problems by a referendum. The head of the European Parliament, Martin Schulz, recently told us about the state of affairs in this “superstate”: “The situation is complicated and explosive, but we shouldn’t get hysterical and solve problems one by one ...” So solve, or immediately call another guard ...

Ctrl Enter
Noticed oshЫbku Highlight text and press. Ctrl + Enter
We are
Results of the week. "We will build this, that from Mars they will look and be surprised!"Democratic dictatorship
36 comments
Information
Dear reader, to leave comments on the publication, you must to register.