Russia is confident in the future of Algeria 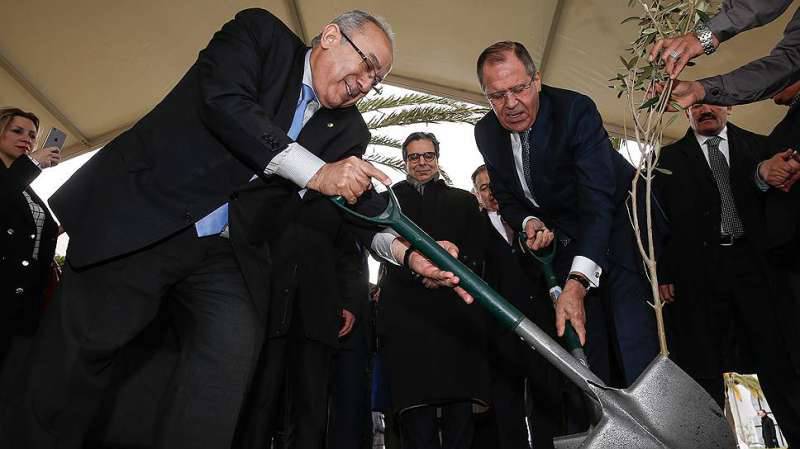 Russian Foreign Minister Sergei Lavrov visited Algeria yesterday, a country that is more successful than its neighbors in dealing with the onslaught of terrorists, but barely withstands the consequences of falling oil prices. 78-year-old President Abdel-Aziz Bouteflika, who has been in power since 1999, is also a threat to stability in the country. Nevertheless, Sergey Lavrov yesterday made it clear that Moscow places special hopes on the development of a strategic partnership with the largest African state in terms of territory. With details from Algeria - Kommersant’s correspondent PAVEL TARASENKO.

After Sergey Lavrov was met at the airport by his Algerian counterpart, Ramtan Lamamra, the motorcade rushed to the building of the country's Foreign Ministry — but not to negotiate. Coming out of the cars, the ministers took shovels in their hands, after which they smoothly buried and poured the "tree of friendship" - young olive. At the same time, the land, which was prepared for this event, reminded Sergei Lavrov of the black soil of “central Russia”, as he informed his colleague. Nearby was a tree planted by US Secretary of State John Kerry.

"Safe haven" on the verge of crisis

Then the visit turned into a traditional course. At the beginning of the negotiations in an expanded format, Ramtan Lamamra recalled: the Russian minister in Algeria is already the fourth time. In 2011, Libya was the center of attention at the talks, two years later - Mali, now Syria is the main source of instability. Sergey Lavrov thanked Algeria for supporting the decisions of the International Syria Support Group, as well as efforts to resolve crises in Libya, Mali and the Sahel region as a whole. "We are unanimous in the fact that with respect to any crises it is necessary to strictly follow the principles of international law, respect the sovereignty and territorial integrity of states, the rights of peoples to determine their own destiny," he said. The Algerian Minister did not raise objections.

Algeria itself in recent years has been a "safe haven" in the region of the Middle East and North Africa: even the "Arab Spring", in fact, bypassed it. Recently, experts, however, increasingly say that the threat of crisis has hung over Africa’s largest state. In this regard, yesterday's meeting of Sergey Lavrov with President Abdel-Aziz Bouteflika was especially curious. The 78-year-old head of state suffered a severe stroke in 2013 and has not appeared in public since. According to some Western experts, the de facto reins of the country are in the hands of Said Bouteflika, the president’s 58 brother. The regime practically does not allow leaks from the presidential palace, but according to rumors, a struggle for power has developed in the country. One of her episodes called the dismissal in September 2015 of the all-powerful head of the Algerian special services - the Department of Intelligence and Security - Mohammed Medien, who was in office from 1990 of the year.

Even more, the situation in Algeria has worsened due to the collapse in oil prices: the sale of energy carriers - oil and gas - brings more than 90% of revenue to the state budget. Due to the crisis, the state budget deficit reached a record level of $ 8 billion. The authorities were forced to abandon a number of social programs (in particular, help for young people), started spending the currency stabilization fund, and also headed for import substitution - they banned the importation into the country of everything that can produced in Algeria itself (after which the range of goods in the stores became much more scarce). At the end of last year, plans were announced to lay off about 40% of civil servants. Last week, the French newspaper Le Figaro interviewed Algerian experts who stated: if the situation does not change, the Algerian economy will collapse, the country will again be swept by civil war and an unprecedented flow of refugees will rush to France - the former metropolis.

Trying to prevent the development of the situation according to this scenario, the Algerian authorities went to a number of reforms: February 7, the parliament restricted the president’s tenure as head of state for two terms. The rights of women and business representatives were expanded. Berberian language received the status of the state. At the same time, Algeria’s leadership is persuading other oil-producing countries to work together to restore prices - including by reducing the supply on the oil market.

Energy prices worry Algerians very much - at a press conference following the ministerial talks, the first thing they asked was this. Sergei Lavrov said that “there is a need to seek solutions on the balance of interests of importers and exporters,” but he didn’t go into details: “A dialogue has been established between OPEC countries and non-Turkish oil producers through the Ministries of Energy. They will not talk in their competence ".

In an interview with the Algerian newspaper L'Expression, published on the eve of the visit, Sergey Lavrov said: “For a number of years in Algeria, in cooperation with the state oil and gas corporation Sonatrach, the leading Russian companies - Gazprom, Rosneft, Stroytransgaz, Technopromexport "Other large companies from Russia are also showing interest in entering the Algerian market." Also, listing the areas of cooperation, he noted the use of atomic energy. Today in Algeria a meeting of the bilateral committee for the coordination of the peaceful use of nuclear energy will open, at which, according to Sergei Lavrov, "it is planned to discuss the possibility of constructing a Russian-designed nuclear power plant on the territory of Algeria, the development of Algeria's nuclear infrastructure, as well as non-energy applications of nuclear technologies - for example, in medicine ". In addition, the minister noted "good developments in the areas of industrial and civil construction, irrigation, transport infrastructure, high technology, agriculture." Algeria is interested, for example, in the supply of food products to Russia.

“In general, the prospects for the development of cooperation between Russia and Algeria are enormous in terms of the Algerian resource potential, the capacity of the domestic market, the needs of structural reforms and economic diversification. But there are no less obstacles,” the senior researcher at the Center for North African Studies and African Horn Institute for African Studies, Russian Academy of Sciences Vladimir Kukushkin. So, according to him, the extensive Algerian plans for the development of ferrous metallurgy are almost entirely focused on new enterprises using technologies of direct reduction of iron using natural gas, rather than "coke-domain cycles", more characteristic of Russia. "The future of several other megaprojects that have been under development for more than a decade, for example, the Trans-Saharan gas pipeline from Nigeria to the Mediterranean Sea, is very uncertain for both economic and political reasons. There are prospects for cooperation in the nuclear power industry, but so far Algeria’s interest is somewhat weaker than Egypt, "- said the expert" b. "

As reported by the Russian Foreign Ministry on the eve of the visit, last year's bilateral trade turnover increased 2,2 times compared to 2014 and amounted to almost $ 2 billion. However, in 2012, it reached $ 2,8 billion - mostly due to contracts in the military technical cooperation. According to the Stockholm Peace Research Institute, Algeria is the leader in arms procurement among all African countries.

Currently, contracts are underway for the modernization of about 360 BMP-1 infantry fighting vehicles (up to the BMP-2M variant), and the supply of about 200 tanks T-90CA, 38 anti-aircraft missile and gun systems "Shell-C1". On February 20, according to Interfax-AVN, Rostvertol shipped the last of the six Mi-26T2 heavy helicopters provided for in the 2013 contract. By the end of 2017, Algerian military personnel should receive eight more vehicles - such an agreement was signed in 2015.

This year Mi-28HE helicopters will be delivered to Algeria, as well as several divisions of the Buk-M2E air defense system under the 2013 contract of the year. Last year, Algeria also signed a contract for the supply of X-NUMX Su-14MKA fighters worth at least $ 30 billion - the contract should be fully closed in the 1 year. In addition, according to Kommersant’s sources in the arms export industry, in 2017, the parties will continue negotiations on the purchase by Algeria of several divisions of C-2016ВМ anti-aircraft missile systems (Antey-300) and the acquisition of two military transport planes IL-2500МД-76А (in the case of signing a contract in 90, Algeria will have to receive two aircraft already in 2016). Negotiations are underway on Su-2017 front-line bombers - in 34, the parties will have to conclude a contract on X-NUMX Su-2016 front-line bombers (export version of Su-12): Algerian military showed interest in vehicles of this type about eight years ago, but after their participation in the air operation in Syria decided to buy finally.

Ctrl Enter
Noticed oshЫbku Highlight text and press. Ctrl + Enter
We are
Algeria is not to fatA great interview with Sergey Lavrov: about Ukraine, Obama and Iran
37 comments
Information
Dear reader, to leave comments on the publication, you must to register.