"Drang nah Merkel", or Problems with Arab and African refugees in northern Russia

March 3 2016
188
Federal channels literally give out daily sentimental reports about how old Europe suffers from the influx of migrants from the countries of the Middle East and Africa. A sensational recent report on how thousands of furious refugees in Greece decided to defeat the obstacles arranged by the Macedonian security forces in the Macedonian-Greek cordon with improvised means. The main message of the refugees is: let us go further to the north, because your Macedonia doesn’t interest us at all - give us Austria, Germany or, at worst, Denmark.


The rally of refugees on the border breakthrough finally acquired an uncontrollable character when, from the official Skopje, they said that we would miss the 150-170 man. The rage of the refugees turned into the broken Macedonian defense lines, and the descendants of Alexander the Great could not resist the migrant crowds who wanted to “pick up” from a hospitable European Union ... arrange your "Drang nah Merkel".

All these attempts from afar look like something resembling a Hollywood action movie, with the only exception that there is no protagonist - a sort of Bruce Willis - that would help “save the world” from a new threat. However, the remote picture of the vicissitudes associated with the influx of Middle Eastern refugees, as it turns out, turned out to be remote for the time being. The fact is that now there are more frequent reports about the fact that this or that group of refugees, you understand, is expressing discontent in Russia too.

One of the hot spots on the map of the Russian Federation in terms of the influx of migrants from countries that are by no means the Red East is the Murmansk region. At first, it was about the “migrant family”, which really wants to be either in Norway (not a member of the EU), or in Finland. Then news agencies began to report on "several families" who were "temporarily" housed in several hostels and hotels in the region. And now it has come to the point that news up to a hundred refugees from various Asian and African states, striving to the West, and simultaneously organizing actions of disobedience to law enforcement officers, appear in the reports.

Murmansk publications and blogs are a real alarm. So, the news agency FlashNord writes that Arab and African refugees, quickly mobilized, staged an unauthorized rally in Kandalaksha. If we consider that the population of Kandalaksha itself is just over 33 thousand people, even a hundred well-organized migrants for this city are a signal. 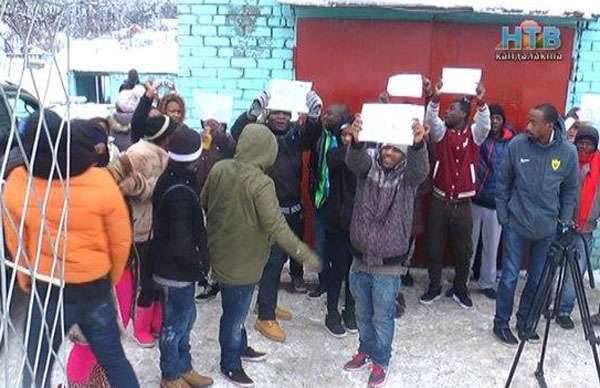 The fact is that, for understandable reasons, the authorities of neighboring Finland are not eager to let in their “friends” from the South and the East, and in the Murmansk region, the number of those who, to begin with, just towards Suomi and pricked up “skis” is gradually increasing. As already noted, "the day before yesterday" - five, "yesterday" - fifty, today - a hundred ... And how much will be tomorrow and the day after tomorrow - a question that remains open, and not open without the participation of the Finnish authorities, who do not want to open their arms to receive of refugees. They need it ...

Murmansk blog and TV channel "People's TV" report that migrants with no northern skin tones took to the city streets, protesting against being "thrown" by so-called carriers. We are talking about people who, for a very decent fee (sometimes several thousand euros), volunteered to transport refugees from Afghanistan, Syria, Iraq, Yemen or Sudan through Russian territory to Finland or Norway. The fact that the carriers “threw” them, the refugees, as they claim, understood when they were stuck in Murmansk hostels not for a day or two, as they were promised, but for weeks and months.

And a hundred refugees, as they say, make a rustling in the open spaces of the Kola Peninsula, and what if this is not the limit? .. What will happen if Finland decides that the refugees will be allowed to move and Russia will be forced to face a growing number of migrants, of whom someone also "threw" ... And the fact that the number of people who want to "throw" will not run dry is a fact, because certain people earn good money on refugees. The whole question is who are these mysterious people who take substantial money from the refugees, not just spending them all over Russia, but also placing them in hotels, hostels and other housing facilities of the same Murmansk region.

The scheme, apparently, is simple: a certain citizen “X” offers help to the refugee “Igrek”. The offer, of course, is not free. Refugee "Igrek" in the presence of his money pays a citizen "X" a sort of first installment to get, for example, through the territory of neighboring countries of the Russian Federation to Russia. Citizen X says that Russia is not at all Macedonia, it does not build any fences for migrants and at the same time borders on several countries of the coveted EU, plus Norway. A refugee "Igrek" with a puppy delight goes on a journey through the largest country in the world, where they are required to pay a second "registration fee" for help in crossing, for example, the Finnish border. The refugee "Igrek", realizing that the cherished European dream is very close, forks again, but then citizen "X" disappears somewhere (of course, purely for good reason), and the situation comes in the style "sees an eye (Finland), yes the tooth hurt. " Some refugees, in a rage, are trying to organize protest actions, while others suddenly begin to think that here (in Russia) is not bad at all, and that Finland will wait ... Kandalaksha - she, of course, is not Frankfurt am Main, but not what anyone Kunduz or Fallujah ...

Murmansk authorities scratched their heads, thinking that something must be done ... After all, if you sit on the fifth point exactly, then tomorrow 100 and 1000 people will come out to protest, and the number of hotels in Kandalaksha and Apatity will have to be doubled for free. .. Having realized that such a prospect is not at all warm, they decided to use a proven tool - OMON. The Murmansk OMON forces, as they say, explained in an accessible language that it is unfriendly and not worthy to raise a wave of discontent. Most of the explanation was understood with half the hint. However, there were those who did not understand. I had to explain in the language of "dry numbers" - almost in the literal sense of the word - for the most violent found 10,242 of hashish. And this is a reason, no - not to send it to court, so that later the Russian state at the expense of the Russian taxpayers also fed "friends from the fraternal East", but a reason to wave to their friends, going to the house, with a callous hand.

Locally - exit. Against the general background, it is not at all a way out, for already tomorrow the refugees “Igrek”, “Zet” and others can try their luck again and wave to Russia and through Russia. And in this case, there is only one effective way out - the competent structures should not leave without special attention the actions of the above-mentioned citizens of “X”, who provide “friends from the East” with non-repayable services for meeting, transit and, less frequently, transportation for cordon.

Ctrl Enter
Noticed oshЫbku Highlight text and press. Ctrl + Enter
We are
Armored vehicles of Yugoslavia. Part of 6. Wars in the ruins. Bosnia and Herzegovina. Kosovo. MacedoniaResults of the week. "In the Greek Hall, in the Greek Hall ... the mouse is white!"
188 comments
Information
Dear reader, to leave comments on the publication, you must to register.