March 3 2016
28
Sipping tea in a Turkish cafe, 37-year-old militant Abu Musab al-Siri told a German journalist about the plans of Dzhebhat an-Nusra. The group intends to "fight" and provoke Russia to violate the truce. The terrorist was happy to tell the correspondent about the war and the “God-given Sharia”. Listening to his almost insane answers, the German understood that he was dealing with a cave savage. Interestingly, neither this savage, nor Turkish President Erdogan, whose Syrian strategy does not find support even from the United States, does not feel at all like losers. 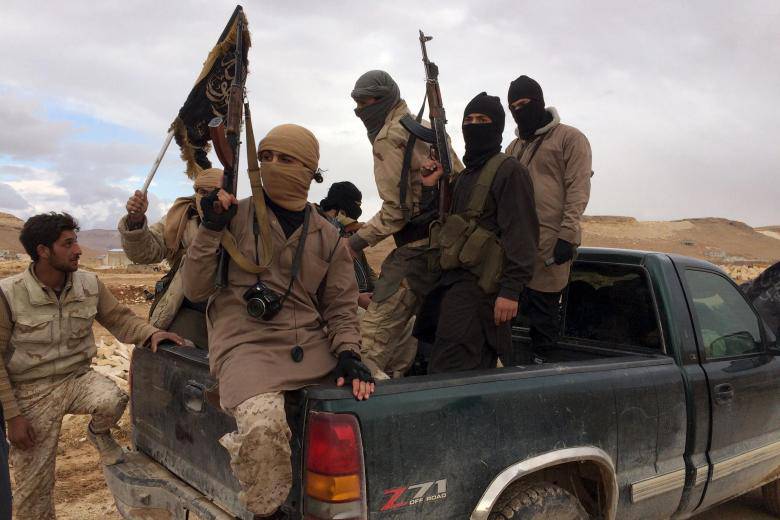 Correspondent «Die Welt» Alfred Hackensberger talked to a Turkish cafe with one tea lover - a fighter "Dzhebhat an-Nusra", who apparently did not look like a radical neoislamist, dreaming of the worldwide distribution of Sharia law.

Meanwhile, this person belongs to the most dangerous branch of the international terrorist network Al Qaeda, which operates in Syria and Iraq, the Dzhebhat al-Nusra group. Abu Musab al-Siri, as he calls himself, refused to wear a “long and shaggy” beard and clothes in the Afghan style.

The jihadist told a journalist that in Turkey you should not dress like this and walk with such a beard. Abu Musab is responsible for promoting ideas among the audience in a cafe in the center of Antakya. He wears a woolen hat, a sleeveless jacket, and pulled his hair into a ponytail. His beard is thin and trimmed. In this form, the thriller looks like a hip-hop artist. But, regardless of this, his mind is at the level of the “Stone Age,” a German journalist believes.

The agreement on a cease-fire in Syria, this fighter calls "stupid." "The front of al-Nusra" and its rival, "The Islamic State," deliberately excluded from this truce, says Abu Musab. Both groups are attacked by Russian and American military aircraft.

But Abu Musab is hardly afraid of bombs. He "feels strong," the author writes. 10000 fighters "Dzhebhat en Nusra" - a decisive factor in power in Syria. The group already has its own strategy: to provoke the Russians to violate the truce.

In recent days, the group has withdrawn some of its units from the territory of Syria, and yet the fighters remained on the front line. By carrying out a targeted offensive, jihadists can provoke a retaliatory strike by the Russian Air Force. It is desirable that “more moderate fractions” come under attack. After that, probably, no truce is out of the question.

In the cafe of Antakya, Abu Musab said that Russia and the “regime” (the Assad government) want to “gain time”. However, it was the fall of the regime of Bashar al-Assad that was the only solution for the civil war, which had been stretching for five years, the fighter believes.

“We need to fight on, everything else is an illusion,” says Abu Musab and takes a sip of tea from a glass cup.

This 37-year-old Islamist, the journalist writes further, represents the “official line” of a terrorist organization that has been active in Syria since January 2012. He firmly believes in the victory of his “Front” in the final of the Syrian battle.

It all depends on the behavior of Russia and the Syrian regime, the journalist concludes. “We are against terrorism, against terrorists from the IG and the Front al-Nusra,” said Salem al-Meslet, a spokesman for the High Council of the Syrian Opposition. However, al-Meslet does not want Russia to succumb to the provocations of "Nusra" and began to bomb "moderate forces."

Abu Musab does not believe that the “Front of al-Nusra” faces decay. On the contrary, he believes that time is playing on the grouping. The longer the conflict lasts, the more sympathy the people of the Front will earn. In addition, Russia was "in an economic crisis, and wars are expensive." He does not believe that Moscow will last long. And so he, Abu Musab, and others like him, will have a "decisive word" in Syria. In Syria, neither elections, nor parliament, nor anything else will be needed. Everything will replace the “God-given Sharia”.

While this shaven-bearded man from the “Stone Age” drank tea in a Turkish cafe, the main Turkish enemy of Assad, Erdogan, was once again criticized by the Americans.

In a large article by Liz Sly, published in Washington Post, it is told that Turkey faces a "strategic nightmare."

Just recently, four years ago, Turkey was ready to become one of the biggest victors, benefiting from the “Arab Spring”. Turkey in the West was called a model with "new forms of governance," a model for the region. And all this suddenly disappeared. Now the “trajectory of the Syrian war” has brought Ankara to a standstill.

Russia, the oldest and closest rival of Turkey, is expanding its presence around the borders of Turkey: in Syria in the south, in the Crimea, in Ukraine in the north, in Armenia in the east.

The “echo” of the Syrian war in the form of suicide bombers penetrating Turkey (in Istanbul and Ankara) filled the Turkish streets with fear. The tourism industry is going through hard times.

The peace process with the Kurds in the south-east in Turkey has become its opposite: a war. The Turkish military today conducts real fighting against the Kurds. In the meantime, Syrian Kurds have “carved out” their own “proto-state” territories on lands adjacent to the Turkish border.

The country's economy is "in a depressed state." She suffered from fears of further instability and because of sanctions from Moscow. The refusal of Moscow "from Turkish tomatoes and tourism" was a retribution for the Russian aircraft shot down in November of 2015.

Finally, Turkey is finishing off a political split with the United States, the closest and most important ally. Erdogan’s claim to Washington on the need to recognize the Kurdish YPG movement (Syria’s main ally in the fight against the Islamic State) as terrorist was rejected by the State Department.

As a result, Turkey was almost completely isolated. She was trapped in part because of her own stubbornness. Soli Ozel, a university professor of international relations (Istanbul), believes that the Turkish authorities are “alienated from everyone” so much that they are unable to “convince anyone to do something”.

“This is a state whose words now have no weight. It bluffs, but does not. It cannot protect its vital interests, and it goes against all, including its allies, ”he said. Such facts seem to the professor "completely catastrophic."

Obviously, the Turkish authorities made a major miscalculation, knocking down a Russian plane last year, trying to "promote its own influence in Syria." Turkey hoped to overthrow Assad and implement the "project of Turkish influence in the Arab world."

Currently, Turkey is confined to Syria in shelling against the advancing Kurdish forces and efforts to strengthen the “rebels”. At the same time, Erdogan is trying (but to no avail) to put pressure on the United States, which "must" agree to the long-standing Turkish proposal to create a safe zone in northern Syria.

Most observers do not think that the Turkish military will directly intervene in Syria - at least for now. In Turkish society, there is no support for the idea of ​​war, and in the Turkish armed forces there is none either. A group of more than 200 scientists, the journalist continues, last week signed a petition, urging Ankara not to intervene in the war in Syria, and the military publicly stated that they were not ready to send soldiers across the border without the approval of the UN Security Council.

However, all this "did not stop Erdogan." He continues his threats, continues to draw red lines. It seems that Turkish politicians are digging a hole for themselves.

Henry Barki, an expert on Turkey from the Wilson Center in Washington, said that Erdogan lost out on foreign policy "because of arrogance." His "self-confidence" takes root from 2010, when "Turkey was the darling of the world." This "turned his head (Erdogan)."

It turns out that neither Turkish President R. T. Erdogan, whose Syrian strategy does not find support even from the United States, nor Abu Musab al-Siri, a savage from the Stone Age, representing the “Front en Nusra” and industrial “propaganda” not anywhere , and in the Turkish cafe, for some reason do not feel like losers. On the contrary, the former, with the arrogance of the Sultan, is trying to dictate the conditions to the White House, while the latter is going to arrange "provocations" of Russia and is eager to break the truce in Syria.

Looks like American journalist Liz Sly is right. Some people really dig a hole for themselves.

Observed and commented on Oleg Chuvakin
- especially for topwar.ru
Ctrl Enter
Noticed oshЫbku Highlight text and press. Ctrl + Enter
We are
The fall of the Syrian airbase Abu ad-Duhor. The longest siege of the civil war is overResults of the week. “Achtung! Achtung! Die russischen Panzerkampfwagen marschieren nach Kiew! ”
28 comments
Information
Dear reader, to leave comments on the publication, you must to register.