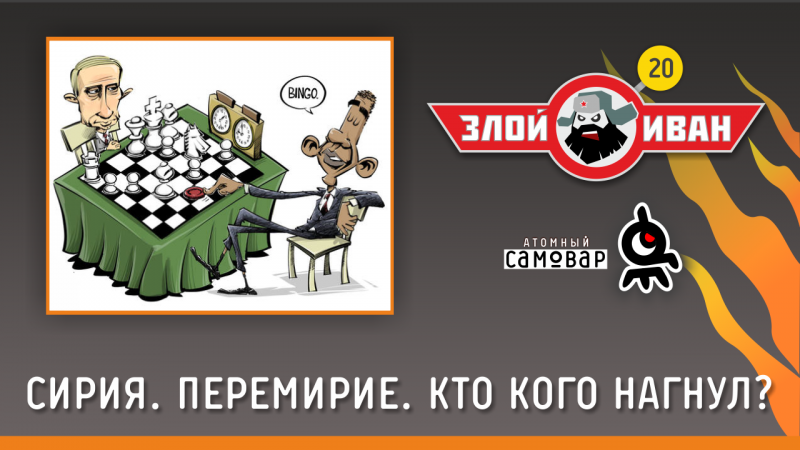 Hello to all ours and not to ours! I am Ivan Victory! And today I am angry again!


News:
“Almost immediately after the conclusion of a cease-fire agreement on Syria, the United States announced that they were discussing a backup plan“ B ”in case of failure of these agreements. And it could be the partition of Syria.” (RIA News.)

The strange and unreasonable self-confidence of the United States, that they are the main Reshals for Syria are already pretty tired.

I recall the chronology of events preceding the cease-fire agreement.
5 years in Syria is a war. The economy is ruined. Brutal executions, murders, terrorist attacks constituted the daily background of any news from Syria. And the West ignored it. And human rights activists also did not itch. Nobody called to stop the slaughter, to start negotiations, to provide humanitarian assistance to the population.

Just think, tens of thousands of dead and hundreds of thousands of refugees. At that time, the West had better things to do. He arranged marches of millions in honor of the 12 dead journalists from Charly Ebdo.

The Syrian army suffered serious defeats and retreated. Everything has already been predetermined. The bloody denouement and death of the country was a matter of several months. Europe, the United States, Turkey, Qatar, Saudi Arabia and the terrorists they support have already anticipated the rip-off of Syria. All the buns have already been staked out and divided, loans have even been taken and already spent for them. No one could suspect that something could go wrong.

And suddenly, from the autumn of last year, Russia begins to actively support the legitimate government of Syria, headed by Bashar Assad. And it does this in the framework of international law and legally. The Russian Aerospace Forces begin, in conjunction with the Syrian army, to destroy all terrorists without understanding their varieties. The successes of the Syrian Army are becoming noticeable and tangible. There comes a break in which no one could believe.

Shock, fear, anger and hatred, this is what the West experienced, the United States and their loyal gang.
Again these Russians intervened and spoiled everything. From the point of view of parasites and vultures, the situation is unfair!

They came to the realization of a breakup, an understanding that there will be no buns, but they will be shizdyuli.
And it became clear to most experts that the so-called moderate and not moderate opposition was left for a short time to run in this world. They were waited by the inevitable dispatch to the gurias by means of good and peaceful Russian bombs.
And then Western journalists saw the light. Human rights activists and humanitarian organizations have awakened and climbed from all the cracks. Howl, cry, cry ... for innocently killed terrorists. All this was accompanied by Russophobic fakes and stuffing with the obligatory suffering photoshop pregnant women, bearded children and old women.

Then came the chaotic threats, accusations, pleas and requests ... To spare, not to bomb, not to fight. All at once started talking about peace, about negotiations, about humanitarian values. And the fact that the war in Syria is already 5 years. They did not care before. After all, it was then that the sons of bitches won their children ...

Speaking heads representing American diplomacy decided to solve the problem in a hurry and restore the shattered reputation. First, there were presentations and ultimatums. Assad must leave, and the Russian Aerospace Forces should not bomb terrorists anymore!
And not that !!! ...
And then came an awkward and stupid pause. Since under the frightening ... "and not that ..." there was nothing. Only an empty bluff and swelling cheeks.
Today, in Syria, no one has control over the situation like Russia. It is Russia that can click a finger to create a no-fly zone over all of Syria. Therefore, cheap Ponte Americans, Europeans and other rabble look pathetic. They do not give us the conditions.

It is logical that the leadership of Russia ignored these ultimatums and empty threats. And she continued to iron the rebel terrorists of all colors and sizes ... with bombs and rockets.
And then the collective west, and the sponsors of the terrorists came up with how it seemed to them a wonderful plan. It was decided to call a part of the terrorists moderate opposition and rebels.

Playing up to the west, Russia pretended to agree with such a sort, but demanded precise information about the whereabouts of the very correct, moderate terrorists and insurgents. Well, so as not to accidentally offend them ... with bombs.

The United States and the West hang on it. Under the stupid pretext that everything is mixed up there, everything is difficult, and they themselves don’t know exactly where they are, and where others are, they refused to give out the whereabouts of their terrorists. So we continue to bomb?

Again we went to long negotiations. All attempts to hammer together at least some legitimate opposition failed. Negotiations broke down more than once, each participant from the opposition promoted the interests of their sponsors. And the sponsors are the sea. Therefore, the requirements sounded idiotic and often opposite.
As a result, the USA sent all their allies to the forest, Europe, Turkey and other rabble underfoot. And they tried to solve everything on their own, face to face. Only the USA and Russia. And it is necessary. Happened!
Russia pledged to observe the truce, the terrorist organizations agreed to in the UN Security Council were excluded from the negotiations. Truce does not apply to them. Moderate terrorists were obliged to report before February 27 about themselves, their numbers and location directly to the headquarters of the Russian Aerospace Forces based on Khmeinin. And patients who will not do this will be treated with bombs.

I do not know how our diplomats fooled the Americans. But they managed to plunge into a completely losing game for them. And they also took responsibility for their terrorists that they would abide by the truce.
The next day, US diplomacy realized the horror of the past negotiations and the agreements concluded. And she began to squirm, hysteria, pretend that everything is wrong ... in advance to accuse Russia of breaking the truce, to frighten the plan "B", to find those responsible for the incident, that is, to behave like typical representatives of the Ukrainian government, and not the leading superpower of the world.

What will happen next in Syria?
And then there will be attempts to return part of the armed gangs to civilian life. Option Chechnya. Implacable and mercenaries will destroy. Sane will be negotiated. This process is long and will take more than one year. Of course there will be provocations from the United States, Turkey, Europe. After losing this war, they will finally try to make the most of the mess.

Russia does not start wars, it ends them. And this war will also end. And it will end with a victory for the Syrian people, the Syrian Army and the Russian Aerospace Forces.

Everything! Believe in your people and your country! Victory will always be ours!
See you soon!

Ctrl Enter
Noticed oshЫbku Highlight text and press. Ctrl + Enter
We are
What you didn't want to know about EnglandInterview by President Bashar Al-Assad to the Sunday Times
28 comments
Information
Dear reader, to leave comments on the publication, you must to register.