Red in the Baltics


Analysts from the "thought factory" are ready to stop the hypothetical Russian aggression in the Baltic States for 2,7 billion dollars a year. Probably, for a large amount, they will agree to head the next “invasion of two languages”.

The American research center RAND, since its establishment in 1948, has been advising the Pentagon and working on orders from US government organizations, conducting research on national security issues, has come to a disappointing conclusion: as a result of a military conflict with NATO, Russian troops will be able to occupy Riga and Tallinn in two or three of the day 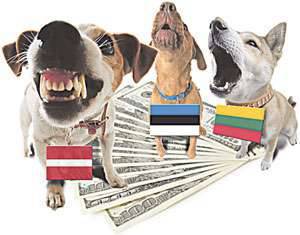 The RAND report, published on the website of the corporation, presents the results of theoretical modeling and exercises. The project involved analysts from the center, civilian and military experts, including the US Army, Air Force, Navy and Marine Corps, the US General Staff in Europe, and the NATO naval command.

The aim of the project is to study the forms and likely outcomes of a Russian invasion of the Baltic countries. The conclusion is clear: at present, NATO is not in a position to protect the territory of its most “vulnerable” to potential aggression of the participating countries.

After the initial tactical defeat, NATO "has a limited number of response scenarios, and all are bad," namely: a counteroffensive associated with the risk of a nuclear escalation of the conflict (the probability of success when using only conventional means is insignificant); reduction of positions to the “second cold war” variant with the border in Lithuania, Latvia and Estonia between the blocks.

The currently deployed NATO forces and the national armies of the states bordering on Russia in Europe are able to withstand the pressure for only a few days. In less than 60 hours (depending on the scenario), Russian troops will reach Tallinn and Riga. This is the result of a series of military strategy games held during the summer of 2014 - Spring of 2015, by RAND.

In addition to the numerical advantage of the Armed Forces (22 battalion, which is significantly less compared to the times of the Soviet Union), analysts of the “thought factory” put the following positions in favor of Russia:

-the presence of a pro-Russian minority (the Russian-speaking population and the so-called non-citizens);
-geographical factor: to Tallinn and Riga closer to the borders of Russia than, for example, from Poland; impassable swampy terrain, which is dotted with lakes and rivers, restricting the use of wheeled military equipment;
-the presence of the Kaliningrad enclave splitting the general front line;
- low probability that the local elites of the Baltic States will defend their cities to the last person.

The available NATO military forces appear to be extremely insufficient, especially those formed on the basis of the Baltic countries themselves: mostly light-armed, not having an adequate level of tactical mobility and poorly equipped to deal with an armored enemy. The Alliance does not have in its territory deployed formations equipped with basic combat tanks. To counter Russian MBT, the Stryker armored vehicles are clearly insufficient. The Kaliningrad region, with its sufficiently powerful air defense system, is able to deter air attacks.

Very high density of artillery fire, superiority in tactical and operational-tactical strike force (ten artillery battalions) do not leave NATO's infantry a chance even for a successful retreat — only destruction on the ground.

Theoretically, the NATO Air Force is able to take a heavy tribute from the advancing Russian forces. But in combat conditions, the Russians, as “reasonably competent adversary,” using their aviation and effective electronic warfare tools offset the technological superiority of the North Atlantic bloc.

It is here, in the “moderate competence” of the Russian army, that lies the reason for the panic of RAND experts. Until now, NATO countries conducted their operations with an overwhelming superiority in aviation, with a qualitative advantage in means of control and electronic warfare, quantitative in terms of the number of combat vehicles, aircraft, ships and cruise missiles. And now the difference is small and the chances of success are not assessed as 100%.

Hence the disappointing conclusion: the actual absence of general air defense, short-range anti-aircraft weapons in the counterattacking US and NATO maneuvering forces aimed at the flank of the advancing armies of Russia will lead to heavy losses.

The powerful Russian Air Force, the means of radio engineering struggle are enough to confront NATO for several days. “The Red Team”, following the results of the simulation, was able to create “bubbles” in space and has enough time to launch massive waves of raids against NATO forces. The result - heavy losses in several battalions and the likely disruption of counterattacks. The factor of unacceptable losses, even in ordinary conflict, is already too much for European vassals of the United States.

To avoid such a scenario in the Baltics, according to RAND experts, the constant presence of seven deployed brigades (three of them heavy tank) and an additional 2,7 billion dollars a year are necessary.

The whole point of the hypothetical “Russian threat” comes down to one phrase: “Give me money!”. Because of the billions of dollars mentioned, part of the funds will go to such virtual games, projects and "scientific" developments. RAND analysts, suppliers of equipment, hygiene products and medicines, logistics operators and other brethren are all waiting for military orders and grants. It is their efforts that are currently swelling up anti-Russian hysteria.

RAND analysts emanate from absolutely false messages in their constructions:

- Namely, the Baltic States are subject to a strike from Russia;
the Russian-speaking population of these countries is looking forward to the arrival of the “liberators”;
-Russia will officially launch its troops in defense of the Russian-speaking population or will contribute to the creation of local “militia” detachments with their subsequent support.

It’s a sin to blame such experts, because the excitement from the anticipated grants and the notorious “Russian threat”, which has already entered the cyclic cognitive circle of self-motivation, will stagnate the eyes.

In contrast to Ukraine, the Baltic countries are members of NATO, and the 5 clause of the treaty’s charter unequivocally equates an attack on one of the countries to an attack on the entire bloc. Thus, Russia cannot be the initiator of aggression. Hence the conclusion: our country should be provoked to "peace enforcement". According to the scenario with the attack of the Saakashvili regime on South Ossetia.

The Russian-speaking population in the Baltics fully adapted to modern conditions. This is an opportunity to travel around the Eurozone and get out to relatives in Russia. Full freedom in choosing a place to stay. For people accustomed to all this, it is undesirable to change the status quo in any direction.

Therefore, the only chance analysts RAND and their followers - to add fuel to the fire, spinning Russophobic flywheel and hysteria in the media, to initiate radical discriminatory measures against the Russian-speaking population at the state level, to support pro-fascist parties on the model and likeness of Ukraine, to create an occasion to protest and performance.

The third and probably the most important antithesis: the ratio of "light" and "heavy" compounds, the need to deploy new air forces on airfields in Sweden, the provision of air defense units of the near radius, and much more, stated in the RAND recommendations, indicates anything not about "defensive strategy."

Today, even in a nightmare, we cannot imagine Russia initiating an attack on a sovereign state. All foreign policy actions and actions of the country are purely tactical, situational and reciprocal. Be it the Crimea, Ukraine or Syria.

We accept the challenge only because in the absence of an answer, chaos and instability will be transferred to the territory of our country. The balance of forces will change, Russia will lose its last allies, and the ring of unfriendly regimes around our borders will finally close.

Asymmetrical, medium-term and long-term plans, strategies and actions are needed. At a minimum, we can initiate such studies, raise a debate in the media to discredit and discredit Russophobic ideas.

Russia needs its own “thought factories” - thinking and acting faster, more assertive, asymmetrical and not as costly as its colleagues from NATO. We need analytical centers operating at the level of the media, the blogosphere, informal political communication, NGO networks, tools of “humanitarian cooperation”, and other structural elements of the Russian world itself. The points of application of their forces - the whole planet, the territory of NATO countries as well.

Ctrl Enter
Noticed oshЫbku Highlight text and press. Ctrl + Enter
We are
Military reform as an integral part of the security concept of the Russian Federation: Systematic dynamic assessmentEmirati gates of the Russian "defense"
40 comments
Information
Dear reader, to leave comments on the publication, you must to register.