What caused the interests of the Syrian Kurds 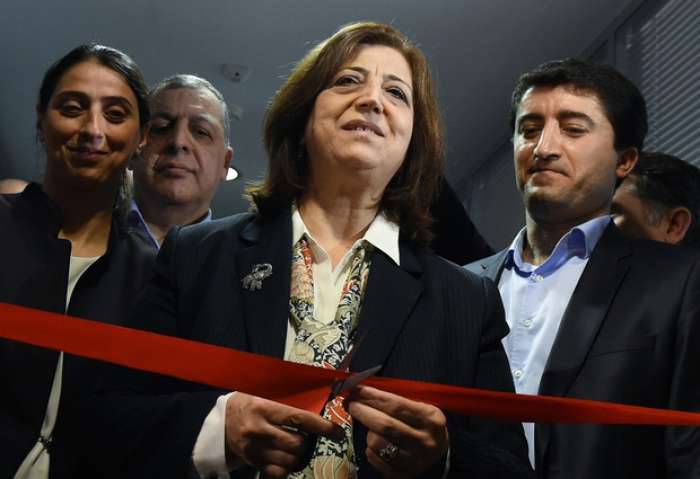 February 10 Syrian Kurds opened their official representative office in Russia (in the city of Moscow). The event can be considered significant, since it marks a definite turn of the perspective of Russia towards the Kurdish issue as a whole, and also means ideological support for the Kurdish detachments in the war in Syria.

This event has two sides of the coin:

on the one hand, not a single person of the Russian side appeared at the opening ceremony (although representatives of the Ministry of Foreign Affairs were invited). The office is open in an unremarkable small office, in an industrial area.

on the other hand, the event is significant and is closely connected with Russian-Turkish relations. As you know, the relationship between the two countries deteriorated sharply after the downed SU-24. It is clear that the Turkish side initially strongly opposed not only the opening of the Kurdish office of Syrian Kurds in Moscow, but also generally opposed Russian support for Syrian Kurds. And Russia supports them, calling them the key successful force fighting against terrorism in the civil war in Syria. In addition, it was Moscow that insisted on the participation of the Kurds in the conference on the Syrian issue of Geneva-3. Party of Nations "in Turkey).

Not so long ago, Turkey dared to put an ultimatum to the United States: "either the Turks or the Kurds." According to the Turkish side, US support for Syrian Kurds has led to "rivers of blood." Of course, the Turkish state is far from being in the geopolitical position in order to make even more enemies with the help of such compromising requirements, having enough of its detractors. According to the director of the Center for the Study of the Middle East, Semen Arkadyevich Bagdasarov:

“Russia is inferior to the United States, as the Americans were the first to provide military-technical assistance to the Kurds and over the past month they transferred over 150 tons of cargo, and they also provide them aviation support. In addition, a representative of the US president visited Kobani, who promised to respect the interests of the Kurds in the "new Syria", that is, in Syria without President Bashar Assad. "

Returning to the topic of Kurdish representation in Moscow, I note that it belongs to Syrian Kurdistan (as the Kurds themselves call it - Rozhava, the so-called Western Kurdistan). The territory of Syrian Kurdistan is located on the Syrian-Turkish border (this is the reason for Turkey’s indignation at the Syrian Kurds), and under the protection of Kurdish troops - 900 km. It should be noted that the Kurds are far from a minority, this is the second largest ethnic group in the country (8% of the total composition, 2,5 million). The Kurds are the only persistent force in the struggle not only with ISIS, but also with the opposition.

A self-government has been created on the territory, an educational system for children (as far as possible during the period of hostilities), has its own newspaper, a militarized structure that defends both the lands under its control and the local population. Despite the fact that the Syrian authorities have imposed an embargo on the cantons (administrative-territorial units), the Kurds have already created a close interconnected coordination self-government in three cities (Afrin, Kobani, Jazeera). In addition, in the hands of Kurdish militias is Minneh airbase (Menakh, Mennagh Military Airport) near the Turkish border. The airfield has a strategic geographical importance, the base is located on the government road leading from the Turkish border. According to the Syrian Kurds, the difficulties in the liberation movement are due to factors such as the closure of the borders (the three points of contact with the Turkish border and all of them are closed by Ankara, so there is no connection with the outside world), an embargo on the creation of organized territorial associations hostilities.

What are the interests of the Syrian Kurds?

recognition of the Kurdish nation as a fundamental one (given that the Kurds literally built the foundations of the New Syrian state and defended the key cities in the country, the demand is quite acceptable).

recognition of the legal status of the controlled Kurdish regions (the requirement is based on the fact that the Kurds managed to subordinate the controlled historical territory and conquer part of ISIS). De facto, a “state in the state” has already been created within Syria, it lacks only formal coordination.

There is a certain set of thoughts that I want to convey from program to program, from article to article, from time to time, in order to convey them, finally, to representatives of the Russian public. And I repeat once again - it is important for Russia to get close to the Kurds, until another power has taken advantage of it, it is important for Russia to fully support the Kurds by cooperating with them in the Syrian civil war (Russia is the air, the Kurds are the ground troops). In addition, Kurdish power can become a potential friendly ally for Russia in the geopolitical field of the Middle East.

One thing is absolutely clear: political regulation in Syria is possible only by peaceful means and with the help of the unification of all democratic forces in the war, including the Kurds as a key unit in the war. The Kurds are part of the solution to the conflict in Syria.

Ctrl Enter
Noticed oshЫbku Highlight text and press. Ctrl + Enter
We are
The role and importance of Kurds in the geopolitics of the Middle EastKurdish question in modern Syria
29 comments
Information
Dear reader, to leave comments on the publication, you must to register.