March 1 2016
15
Ministry of Defence published another newsletter of the Russian Center for the Reconciliation of the Parties in Syria. The data are as of 1 March. 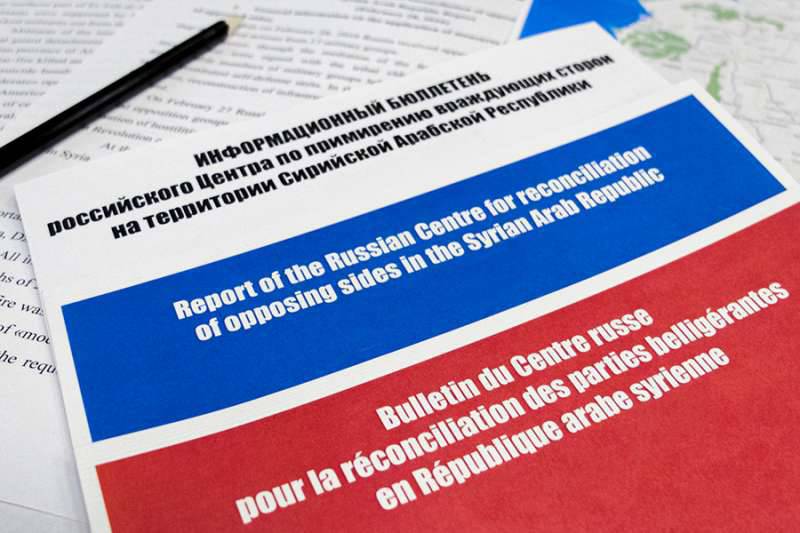 During the day, agreements on the cessation of hostilities were concluded with four commanders of the moderate opposition groups controlling Dumeir (Damascus province). At the same time, the total number of signed agreements reached thirty eight.

Negotiations continued with the leaders of the five armed formations stationed in the provinces of Damascus, Der'a and Homs.

With the mediation of the representatives of the Russian Federation, a meeting took place between the leaders of the province of Daraa and the residents of the localities of Etbah, Samayn, Mesmia, Nava, Saida and Nahta, which was attended by over a thousand people.

According to the results of the event, eight hundred and forty-two members of the Jash-Al-Islam, Syrian Free Army, El Yarmouk Brigade groups signed statements refusing armed struggle and returning to peaceful life.

The meeting took place, despite attempts by radical groups to disrupt the event. While traveling to the meeting site, a number of local residents were beaten by militants.

In addition, they took hostage the former Syrian army colonel Zaydan Alnserat, who was one of the initiators of this event.

The results of monitoring compliance with the cessation of hostilities

During the day 15 recorded violations of the cessation of hostilities. The greatest number of violations noted in Damascus, in the provinces of Aleppo, Homs, Latakia.

So, during the day five times were subjected to shelling from mortars and small weapons positions of government troops, Kurdish militia and residential areas in the northwest of Aleppo.

In the city of Damascus, terrorist groups controlled by Jibgat en Nusra, from 5.00 to 5.30, opened mortar fire on Al-Maj-Azra, Mukhim Al-Wafdain and central prison areas three times. As a result of the attacks, one civilian died and three were injured of varying severity.

In the area of ​​Marj Al Sultan (Damascus), a group of militants, after mortar shelling, attempted to break through the positions of the Syrian army.

In the province of Latakia, militants of the Jibgat al-Nusra formations, which control the settlements of Qban, Knedd, Bdam and Narfus, fired mortars and small arms at government positions four times, provoking them to retaliate. Units of the Syrian army showed restraint and did not open the return fire.

In the province of Homs, militants twice attempted to attack positions of government troops and militia in the area of ​​the village of Narb-Nafs.

The increase in the number of violations recorded testifies to the attempts of the leaders of the ISIL and Jibgat al-Nusra formations to thwart the reconciliation process by firing at positions of government troops and residential areas from positions located in areas controlled by the moderate opposition.

The aerospace forces of Russia did not strike the areas controlled by the “moderate” opposition detachments that had joined the cessation of hostilities and fulfilled its conditions.

29 February The Russian Center for Reconciliation of the Warring Parties, in addition to the list previously submitted by the American side from the 69 formations of the "moderate" opposition, which agreed to the conditions for the cessation of hostilities, received an additional list including the 61 squad.

Currently, data is being analyzed. ”