March 2 2016
92
At the beginning of this year, the Pentagon decided to terminate one of the most ambitious projects of recent times, and also to create on its basis a new development. Some features of the new project have already been identified, a designation has been chosen and a circle of potential developers has been roughly defined. In the foreseeable future, a contractor will be selected who will have to create new equipment and later build it in the interests of the armed forces.


A few weeks ago, it was announced that in the foreseeable future, the US defense industry would develop a new unmanned aerial vehicle, which received the official designation CBARS (Carrier-Based Aerial-Refueling System - “Deck refueling system”). The aim of this project is to develop a promising UAV with equipment to perform refueling of aircraft and other UAVs in flight. The new program "comes" from the previous project UCLASS (Unmanned Carrier Launched Airborne Surveillance and Strike - "Unmanned Deck Shock Reconnaissance System"), which, in turn, was based on best practices from the older project J-UCAS (Joint Unmanned Combat Air Systems - "Unified unmanned combat air system").

Despite plans to apply the existing developments, the Pentagon’s current intentions can be interpreted in a critical manner. It can be argued that the UCLASS project, which lasted for almost ten years, did not lead to any real results, although some of its achievements can be implemented in the CBARS program. Thus, the previous project can hardly be considered successful, even with the construction and testing of the prototype. 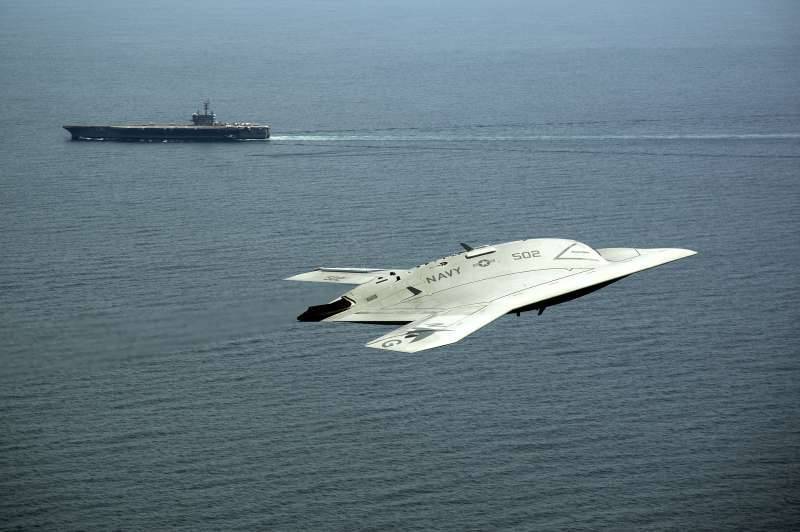 Not so long ago, the US Department of Defense announced the official designation of the aircraft of the CBARS program. Prospective drone-tanker called RAQ-25. At the end of February, new information appeared regarding the names of the new project. It turned out that the command of the US Navy did not approve the proposed name, which is why it decided to put its version into circulation. About the reasons for this wrote edition of UNSI News. So, the head of the Office of Naval Operations, Admiral John Richardson, commented on the proposed index as follows: “I’m not sure that I really liked the new name of the CBARS project, so we’ll offer something better.”

Soon there was evidence of a new name proposed fleet. It is reported that in the new Navy documents, including in the draft budget, there is a new name Stingray ("Scat"). Thus, in just three months, the project managed to change several names, and only the last designation was adopted in accordance with the wishes of the naval forces, which will operate new equipment.

According to some reports, the designation Stingray has not yet become official. UNSI News asked for comment from the spokesman for the United States Navy, Ray Mabus, whose duties include, among other things, working with project names. He did not confirm the information about the introduction of the new project name CBARS.

According to available data, the Pentagon and the naval forces are currently working on the formation of technical requirements for a promising project. Requirements for the new technology will be published in the near future, after which a competition is launched to develop a new project. Boeing, General Atomics, Lockheed Martin and Northrop Grumman are expected to attend. Who exactly will get a contract for work - while it is difficult to say.

Meanwhile, the defense ministry is making plans regarding the financial side of the project. Flight Global writes that in the period from 2017 to 2021 fiscal years, the Pentagon will spend about a billion dollars on a CBARS program. Thus, part of the funds previously planned to finance the UCLASS program will be redirected to pay for new works. Financing of the new project will start next fiscal year. In 2,2, 2017 million dollars will be allocated to the RAQ-25 project. Further funding will grow over the next few years: 89 million in 349-m, 2018 million in 544-m and 2019 million in 646-m. Last year funding will be reduced to 2020 millions.

In the 2017 fiscal year, full-scale work on the new project will begin. In the meantime, it is planned to carry out a number of final works within the framework of the UCLASS project. Recall that in the course of this project, which started in the middle of the last decade, the Northrop Grumman company built and tested the deck X-47B UAV, which was originally intended for solving reconnaissance and attack tasks. Not so long ago, it was decided to abandon the existing project in favor of the new one.

The goal of the new CBARS project is to create a UAV designed to refuel other aircraft in flight. The development of such equipment will allow the US Navy to get rid of the long-standing problem associated with increasing the combat radius of existing aircraft. The fact is that since the late nineties deck aviation It does not have a full-fledged tanker aircraft, which prevents it from fully fulfilling its tasks. In 1997, the specialized Grumman KA-6D Intruder tanker was withdrawn from service. Since then, in-flight refueling has been carried out only by F / A-18 fighters with outboard refueling units. 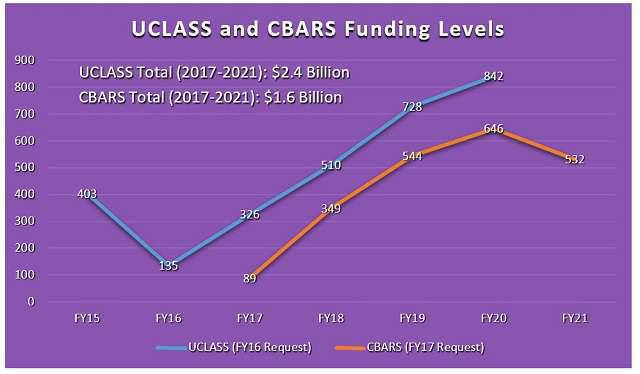 The use of fighters, not only for its intended purpose, but also as tankers leads to specific consequences. First of all, this affects the distribution of tactical roles and the combat potential of the units. Depending on the tactical need, up to 20-30 percent of the total number of sorties can fall on fighter flights with refueling equipment. Such work significantly reduces the overall combat potential of a squadron or wing, because they are deprived of the opportunity to send all existing aircraft to the combat mission.

It is assumed that the promising drone tanker RAQ-25 Stingray will be able to fully solve the tasks and thereby release the F / A-18 fighters, allowing them to do only combat work. In this case, it can be expected that the use of unmanned tankers will lead to a certain increase in the efficiency of such work. A UAV with characteristics at X-47B or higher will be able to stay in a specified area for a long time outside the enemy’s air defense zone and refuel combat aircraft responsible for gaining air supremacy or attacking enemy targets.

A complete list of requirements for the new project RAQ-25 has not yet been determined, but some of the wishes of the military are already known. It is assumed that the application of the developments under the UCLASS program will allow the new Stingray apparatus to obtain some capabilities for conducting reconnaissance and strikes. What kind of means and possibilities this apparatus will receive is not yet specified. In addition, the new drone will allow to solve one of the most important tasks associated with the further development of carrier-based aircraft. It is supposed to be used for testing joint piloting and joint operations of various types of aircraft, both manned and unmanned.

The preliminary work, the purpose of which is to formulate the requirements for the promising UAV RAQ-25, is devoted to the entire current calendar year. In the last months of 2016, the US Navy and the Pentagon must post a request for proposals to create a new project. A sample list of potential participants in the program has already been determined, but it’s too early to speak about its exact composition. Next year, the companies applying for the contract will have to carry out a preliminary project development and submit the necessary documentation, after which the military will make their choice.

According to current plans, the results of the competition will be announced in 2018 year. At the same time, the winning organization will receive a contract to carry out full-fledged design work and the implementation of other stages of the project. Design, prototype testing and other program phases will be carried out before 2021. By the middle of the next decade, serial RAQ-25 CBARS / Stingray will have to go into service and begin their service in the naval forces.