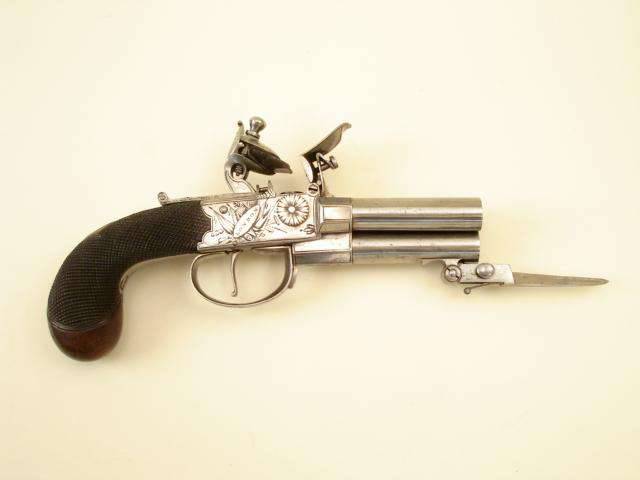 In a previous article, the site HistoryPistols.ru told about English double-barreled flint pistols with a boxlock lock and a feature of their design.

In addition to double-barrel, gunsmiths produced multi-barrel pistols with boxlock locks. About it weapons and will be discussed in this article.

The main task in the manufacture of multi-barrel pistols was to create an advantage for the owner of the pistol in the form of giving him the opportunity to fire not one or two, but a larger number of shots from the weapon, without additional manipulations on his equipment. Of course, the shooter had to pour seed powder on the powder shelf before each shot, but this took much less time than loading the gun barrel with a powder charge and a bullet. 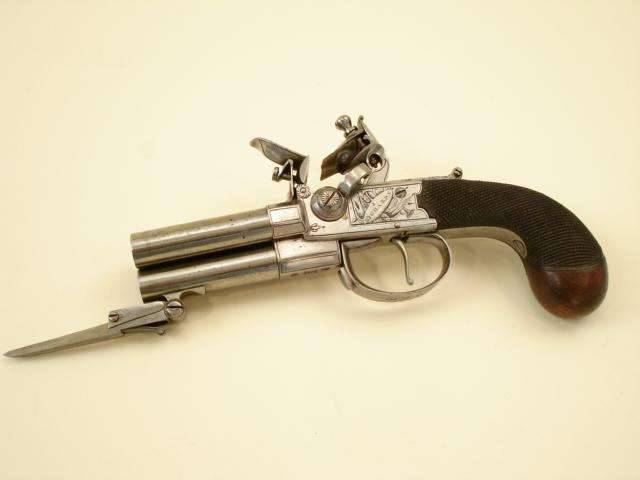 Three-barrel flintlock pistols with boxlock locks appeared simultaneously with double-barreled guns in about the last quarter of the 18 century. The photo shows a triple-barreled flint pistol with a triangular stylet, which is made around 1790 year. The frame and gun barrels are made of steel. The two upper trunks are placed in a horizontal plane, the third trunk is installed under them. The length of the trunks 57 mm. This gun
the handle is not flat, like many boxlock pistols, but rounded with a diamond-shaped notch on the surface. 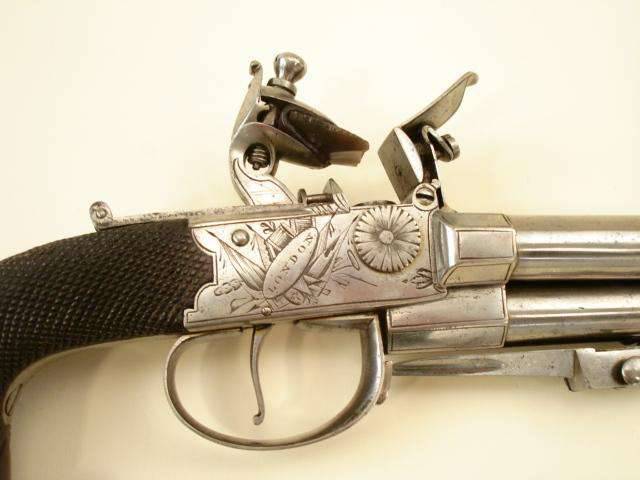 With the exception of the breech, the design of the pistol is no different from other weapons with boxlock locks. Not quite the usual form has a trigger guard. Her front and rear pillars are folded to the side of the trigger. In addition, a projection is made on the front rack for additional fixation of the stylet in the stowed position. On the right side of the frame you can see typical British engraving and the text “LONDON”. 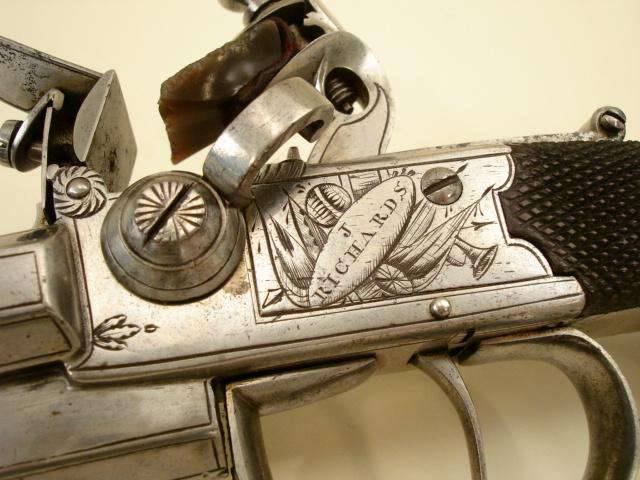 On the left side of the frame is mounted a lever of the crane mechanism, allowing the shooter to fire alternately from each barrel. On the left side, in addition to engraving, there is a text indicating the manufacturer “J RICHARDS”. 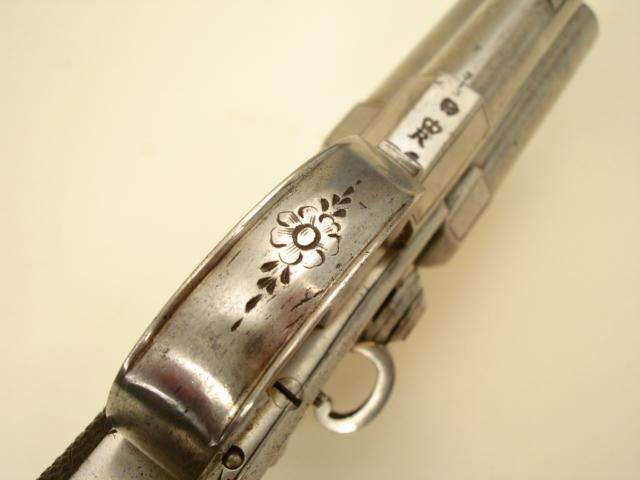 At the bottom of the trigger guard engraved in the form of an image of a flower and floral ornament. 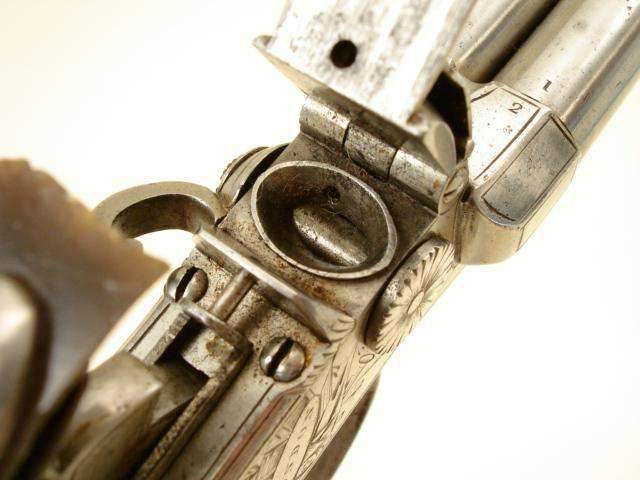 Fuse conventional design. In the lid of the powder shelf, a hole is made for the safety pin. Gunpowder shelf oval-shaped gun. In the left front of the shelf has one seed hole, which is made in the wall of the powder shelf, and not in the crane mechanism. This hole is connected to the left upper barrel. Probably the first shot is always made from this trunk. Then, as the crane rotates, the pilot openings of the upper right and then of the lower stems appear alternately. If you do not make the first shot from the left upper barrel and turn the crane mechanism, then two firing holes will appear in the burning zone of the seeding powder on the powder shelf. In this case, when you press the trigger, the shooter will fire a shot simultaneously from two barrels.

On the surface of the barrels and the frame of the gun marked numbers marking «1,2,3» to the owner did not confuse the barrels when equipped. Judging by the numbers, the upper barrels of the pistol are not screwed into their state-owned units. This indicates not only the carelessness of the owner of the weapon, but also the high quality of the manufacture of the pistol. It was not always possible to screw the trunks in the wrong place, without distortions and the formation of gaps. At the bottom of the frame are visible British stamps.

Stilettoe length 45 mm pivotally mounted under the lower barrel. The button for fixing the stylet is located on the right side. The channels of the trunks at the muzzle have an appearance in the form of an eight-pointed sprocket, for mounting the key tip when unscrewing the trunks. Due to the fact that the stylet is installed under the lower barrel, it is possible to unscrew this barrel only after removing the two upper barrels from the weapon. 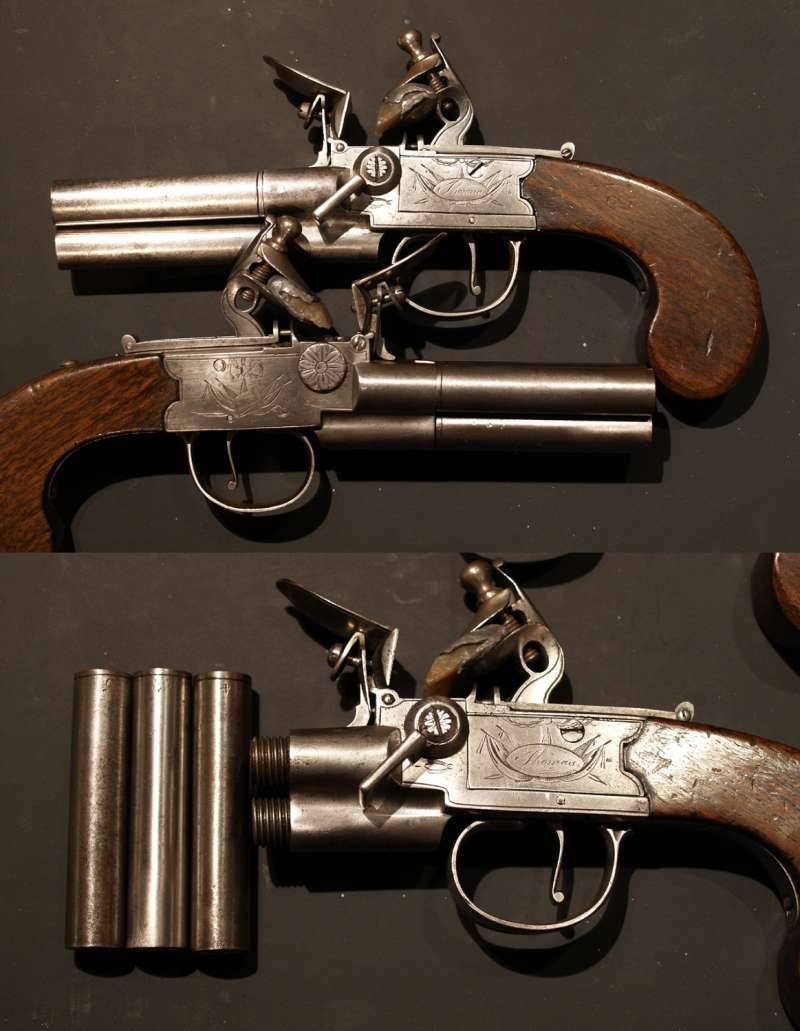 Three-barrel pistols could have a different execution. The shape of the trigger guard, the handle and the lever of the crane mechanism changed. However, the overall design of the pistols remained unchanged. 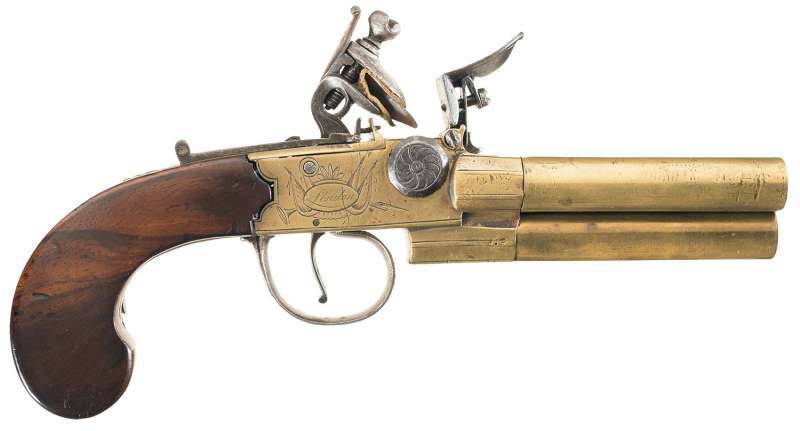 Various materials were used to make frames and trunks. Here for example the pistol frame and even the trunks of which are made of brass. 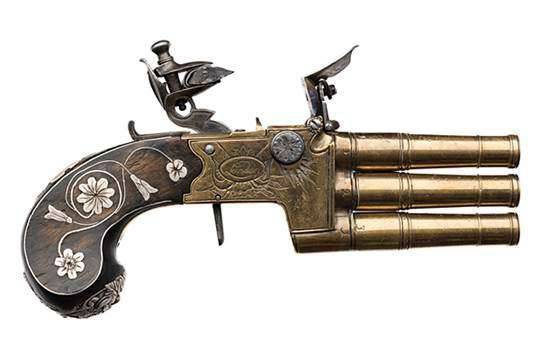 Some triple-barreled boxlock pistols were made with a folding trigger and no trigger guard. 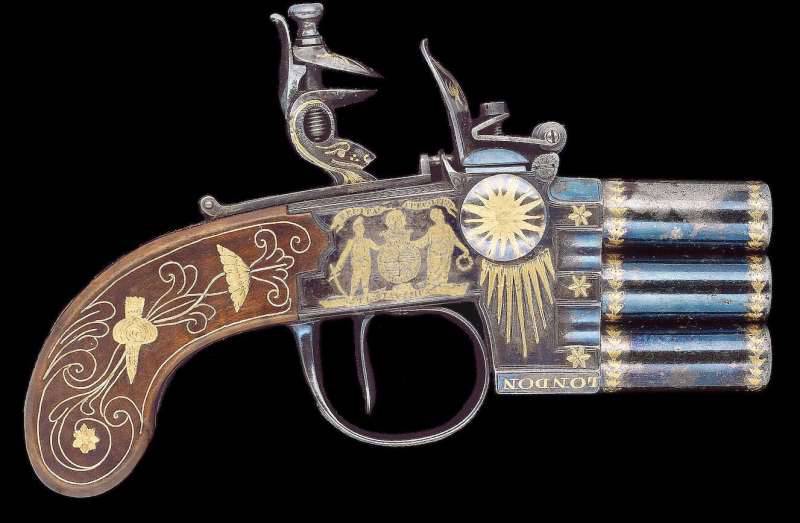 Three-barrel pistols with a vertical arrangement of all three barrels have a rather interesting appearance. Thanks to this design and a flat grip, the weapon becomes more compact and comfortable for concealed carrying. 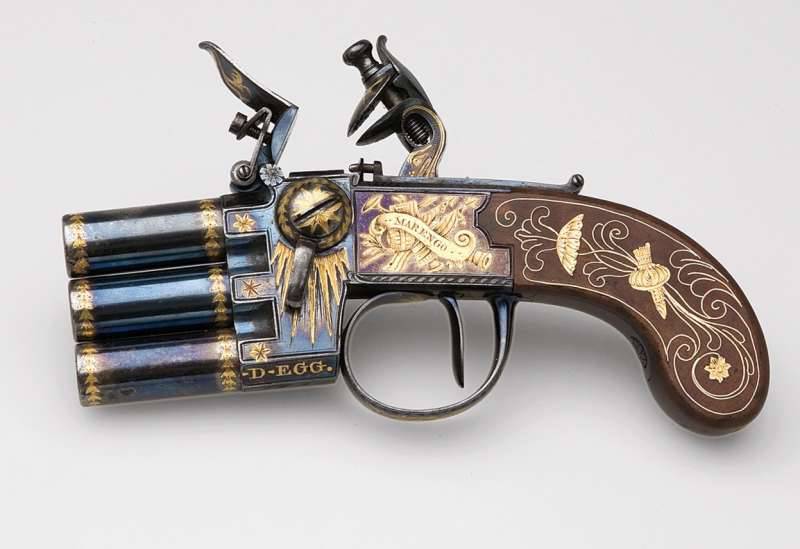 The photo shows a richly decorated triple-barreled boxlock pistol. The frame is covered with beautiful black and blue burnishing. Metal parts weapons covered with gold. The handle is inlaid with gold and silver wire. 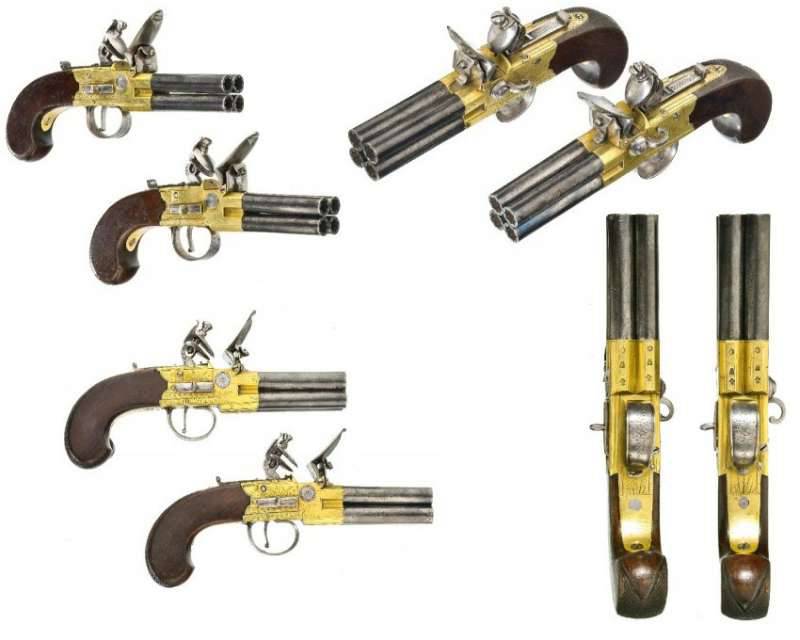 In addition to the three-barreled gunsmiths, four-barreled boxlock pistols were also produced. 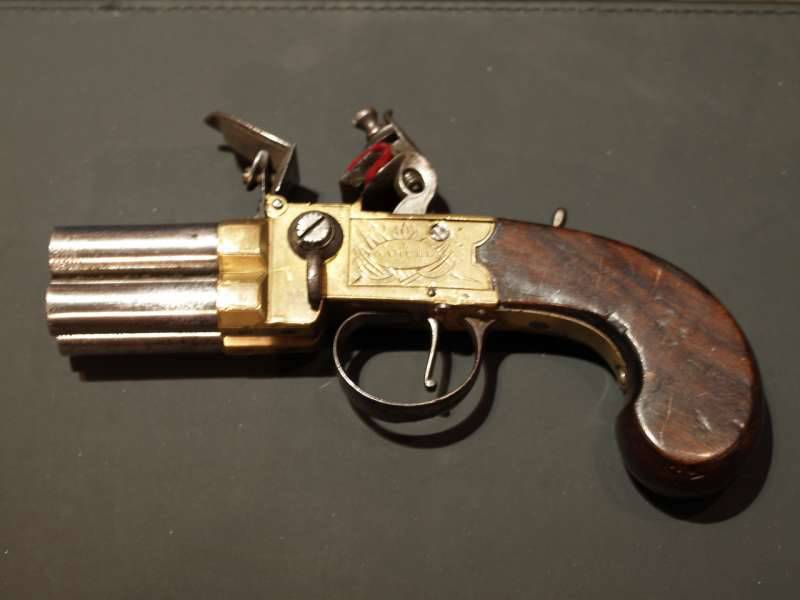 The classic layout of such weapons, which is most often found, is the location of two pairs of barrels, screwed into the breech frame, one above the other. The lever of the crane mechanism, as a rule, is located on the left side of the pistol frame. 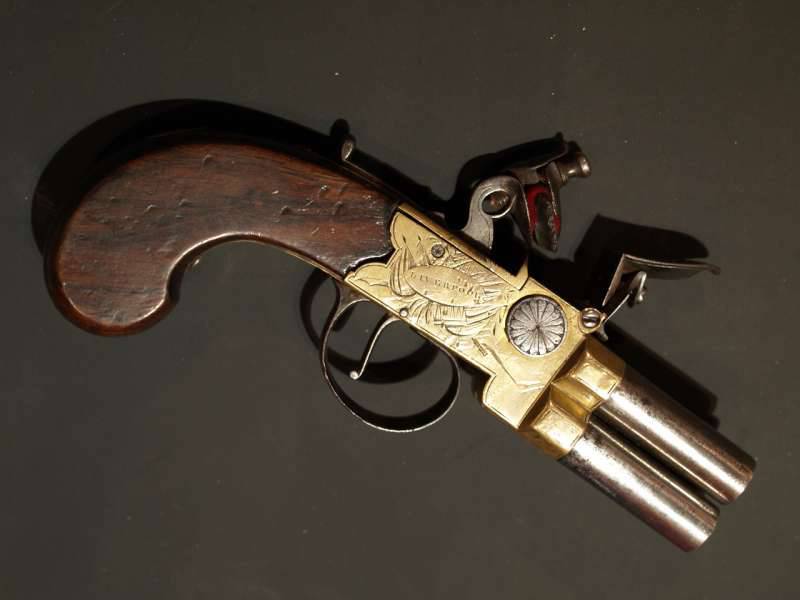 Flint lock boxlock conventional design. Trunks, parts of the lock, steel trigger guard. The frame is made of brass, its side surfaces are engraved. The pistol grip is flat with a rounded tail, made of walnut wood. 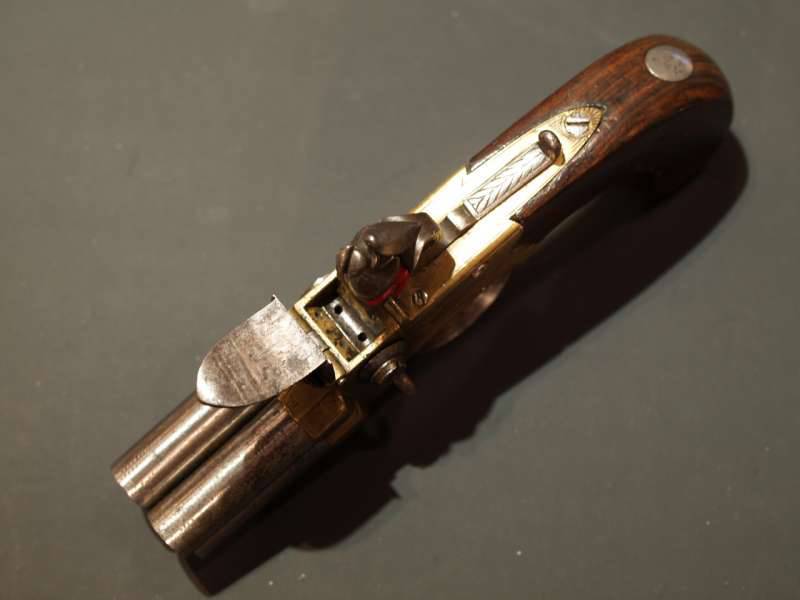 However, if we look at the weapon from above, it becomes noticeable that a pair of seed holes are made in the crane mechanism of the powder shelf. Most likely each of these holes is connected to one of the trunks. If this is so, then it turns out that the pistol is just volley and has the ability to produce only two shots in turn from each pair of barrels. 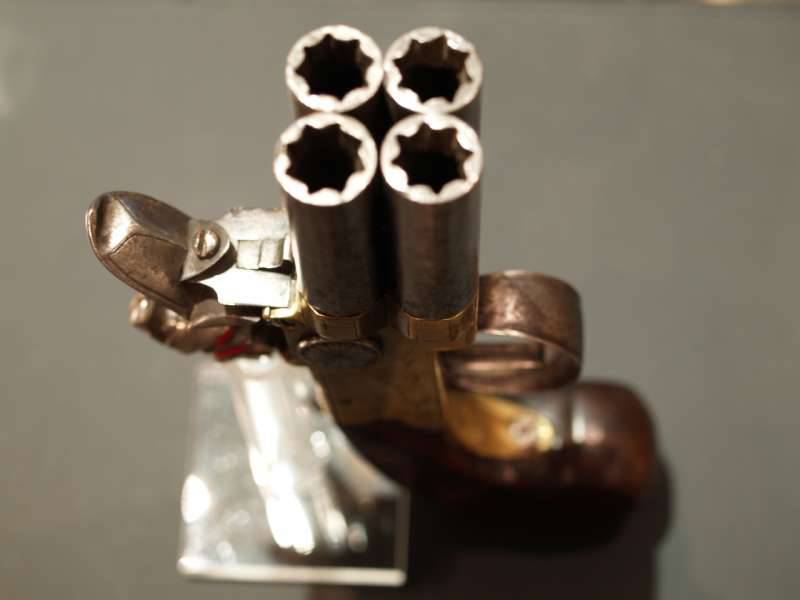 Perhaps this is due to the fact that in small-sized weapons it is difficult to make four separate channels for each barrel in a crane mechanism, given the capabilities of the equipment and technology of the end of the 18 century. 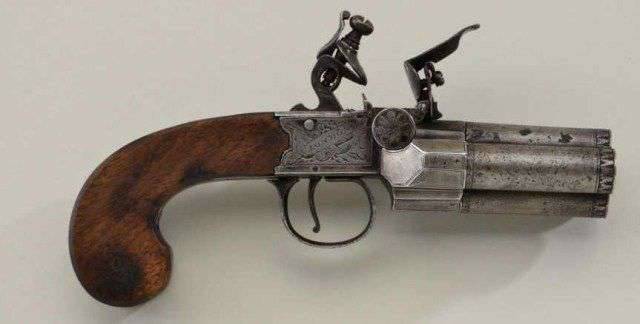 More rare is the layout, when the trunks are not placed in pairs in a horizontal plane, but in a different way. Here is an example of such a gun. 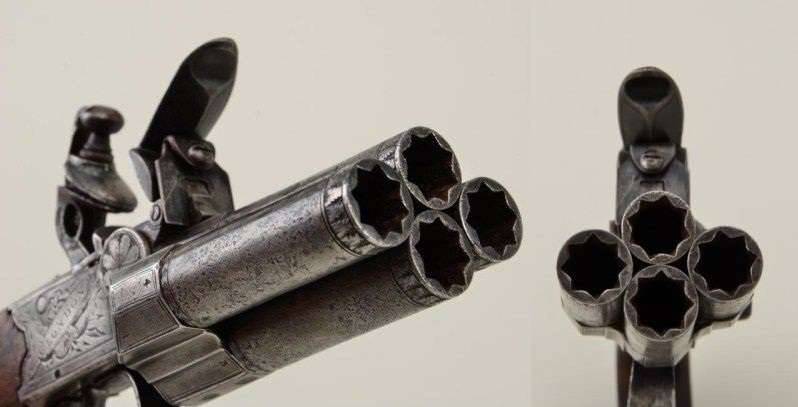 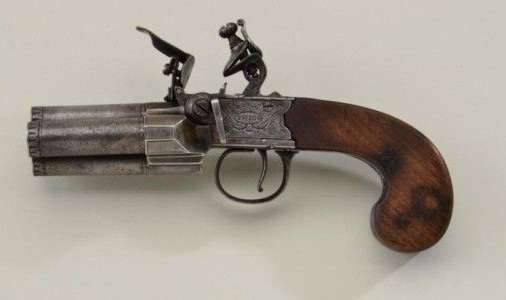 The lever of the crane mechanism, located on the left side of the frame, is somewhat elongated. The lever has two main positions and allows you to make two shots alternately with volleys from two barrels. 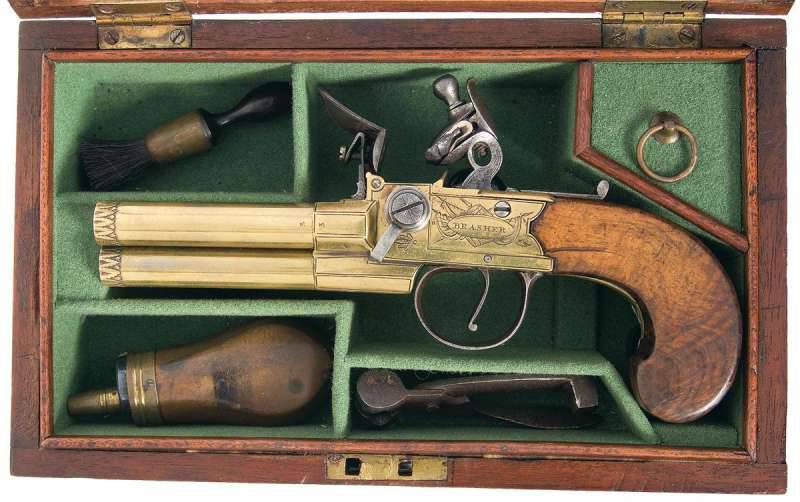 Multiple flint pistols with a boxlock lock, as a rule, were made by English craftsmen. The weapon was intended for self-defense and was produced both in pairs and one by one. Usually, together with a pistol, there was a kit with a powder flask, a pulley, and accessories in the form of screwdrivers, ramrops, and other tools necessary for servicing the weapon.

The antiquarian cost of multi-barrel flintlock pistols with a boxlock lock is usually higher than that of a single-barrel weapon because of its rarity and unusual design. Auction prices start at 1500 dollars and often exceed 5000 dollars for rare, well-preserved and richly decorated weapons.