March 2 2016
48
Brigadier-General of the so-called Free Syrian Army Asaad al-Zoubi, who heads the delegation of the High Negotiating Committee from the opposition, told the press about "ignoring" the cease-fire regime by Bashar Assad. According to az-Zoubi, the truce "collapsed." Turkish analyst Burak Bekdil is also skeptical about the peaceful resolution of the confrontation in Syria. The journalist blames, however, rather not Assad, but Erdogan with his “neo-imperial ambitions” and inability to realize the reality. 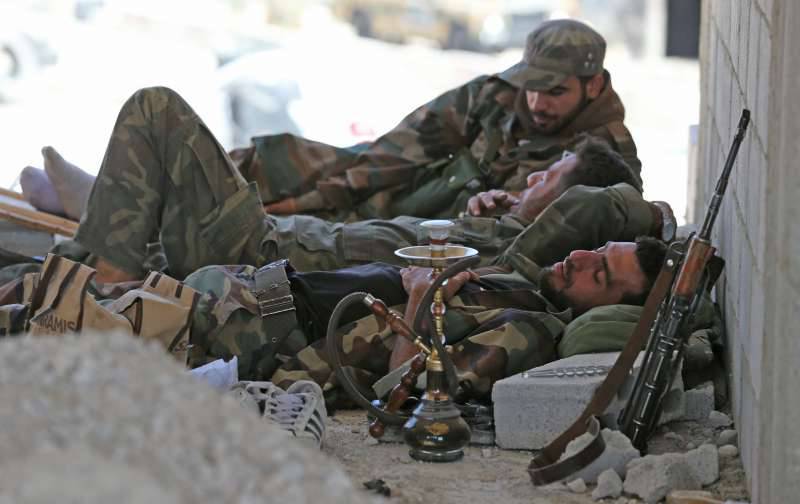 The truce in Syria "collapsed" before it began, and therefore the opposition does not exclude its abolition, said Al-Hadath television channel head of the negotiating group of the High Committee of the Syrian opposition negotiation Asaad al-Zoubi, reports RIA News".

According to the opposition, the Communist Party of the Soviet Union is considering the option of a complete abolition of the truce.

At the same time, this man accused the Syrian authorities of using poisonous gases. Allegedly they have at their disposal 600 tons of chlorine.

Finally, he stated that "the Russian Federation, Iran and the Syrian regime do not want a truce and do not adhere to it." According to the oppositionist, the VKP "cannot trust Russia, since it is, like Assad, the main enemy."

One should not think that in the West such a statement was supported by applause.

The US Secretary of State disagreed with al-Zoubi. “It is the third day (of the cease-fire), there are certain data on violations, we all take them very seriously. And we are making efforts in the framework of the agreed process to find out whether there was a violation (truce regime) or in reality there were only attacks on (terrorist groups) Dzhebhat al-Nusra or DAISH, ”the newspaper quotes "Sight" John Kerry.

According to him, “at the current stage, we don’t have evidence of this kind that would (force) us ... to come to the conclusion that this problem cannot be solved, or that we cannot improve the process.” "Therefore, we urge all parties not to seek the possibility of evading responsibility for stopping hostile actions, but to help the process of bringing myself to justice," the secretary of state added.

The publication cites the statement of the Minister of Foreign Affairs of Germany Frank-Walter Steinmeier. While visiting Washington, he admitted that in Syria, "tangible progress has been made in the past few days."

“Now it is important to ensure that this process is by its nature more permanent,” and this would open the way for the resumption of inter-Syrian “talks in Geneva,” the German foreign minister said.

Earlier, recalls "Reedus", UN Secretary General Ban Ki-moon noted that the cease-fire in Syria is being observed, despite some incidents.

NATO Secretary General Jens Stoltenberg called the cease-fire agreement the best basis for a political resolution of the conflict.

Thus, the Syrian "oppositionist" with his "army" risks remaining alone.

However, in terms of a truce, as well as peace in the region, analysts do not harbor illusions.

Turkish journalist Burak Bekdil (Burak Bekdil) is skeptical about the peaceful resolution of the confrontation in Syria. He blames, however, rather not on Assad, but on Erdogan with his “neo-imperial ambitions” and inability to realize reality. It is remarkable, by the way, that the article of the Turkish analyst was published in the American edition.

Columnist of the Turkish newspaper "Hurriyet Daily" Burak Bekdil in the material written for the American think tank Gatestone Institute, pointed out that the neo-imperial ambitions and habits of the Turkish authorities proved to be disproportionate to the strength and influence of Ankara in the region. However, the Turkish rulers are not able to realize this.

Not a dozen years have passed since “many Western statesmen and scholars” praised the Islamist leaders of Turkey as representatives of the ideas of the “postmodern, democratic, reformist” and even “pro-European” type that could serve as an example of the “less democratic” Muslim countries in the Middle East. Patrick Sal wrote about the “rise and rise of Turkey” in the New York Times in 2009.

What has changed since then? Nothing: these “postmodern Islamists” simply presented themselves to the world in “suitable packaging”. And as a result of this deception, the Turks today pay a high price for neo-otmanist and revisionist ideology. Turks were wrong in their leaders, in their strategic vision.

The analyst recalls many terrorist attacks in Turkey starting in July 2015 and ending with the latest explosions (January and February, Istanbul and Ankara). In just seven months, more than 170 people died as a result of the explosions, he recalls. But here we must add more 300 dead security officials and more than a thousand Kurdish militants killed by the Turkish security forces (the agreement on the Turkish-Kurdish cease-fire ended in July last year).

Outside its borders, Turkey also "floats in a sea of ​​chaos," the columnist said. The country was involved in a dangerous "alien war", waged against the Shiite Muslim block and the Shiite governments in Damascus, Baghdad and Tehran, as well as their Russian supporters. In addition, for “neo-Ottoman Turkey” Lebanon, Libya, Israel and Egypt are “hostile” states.

What do government officials say? They make unofficial statements handing the blame on the "enemies of Turkey" who are launching "terrorist groups" into the country to carry out attacks. “Inspirers” of attacks are called some states, from several to one.

In fact, Turkey is simply trying to bite off too large a piece of cake, which it cannot swallow. Political players in the eastern Mediterranean, including Turkey, are taking too much upon themselves. There are too many people who want this cake, and Turkey will not be allowed to eat peacefully.

It is no secret that Iranian forces are operating in Syria: around 50000, Shiite militias are engaged in hostilities there.

From September 30 Russia 2015 bombed targets hostile to the regime of Syrian President Bashar al-Assad. Her planes carried out about 7500 combat missions, 89% of which attacked the enemies of Assad, not part of the "Islamic State", the author said. Only 11% of attacks were addressed to the Islamists, who are "universal enemies."

Russia is able to surround Turkey militarily in Syria, as well as from the Crimea and Armenia. The author recalls that Moscow recently announced the deployment of a new batch of fighter aircraft and attack helicopters at an air base outside of Yerevan, 25 miles from the Turkish border.

Turkey looks helpless against such a background, the analyst believes. NATO allies show coldness to its problems. Ankara is openly warned that in the event of an armed conflict with Russia, Turkey will not be able to count on the support of NATO.

Columnist believes that there are a number of issues relating to the likelihood of a peaceful resolution of the conflict in the region:

1. Will Muslims ever stop “hating and killing each other,” including bombing mosques? Will there be an end to the 14 age-old war?

2. Will there be a capable government in Damascus and Baghdad in the near future?

3. Will the Sunni world stop its radicalism?

4. Will the Shia ever control their own expansionist ambitions?

5. When will the Sunni and Shiite worlds stop hating the Jews and stop making statements about the destruction of the state of Israel?

6. Will the Turkish Islamists ever realize that their neo-Ottoman ambitions are disproportionate to their power and regional influence?

7. Will the Western world challenge Russia? If so, how?

8. Will political players in the eastern part of the Mediterranean Sea be finally “happy”, satisfied with small pieces of cake — or do they necessarily need large pieces?

Burak Bekdil gives a negative answer to all eight questions.

Thus, the analyst does not believe that reason will triumph in Ankara and that Erdogan and his ministers are aware of the fallacy of their neo-Ottoman aims. Not believing that “capable governments” will appear in Damascus and Baghdad in the near future, he rejects the likelihood of peace in the ever-warring region. Governments that hunt for “big pieces of the pie” will not end the hostilities. In this geopolitical scenario, Turkey will undoubtedly plunge into “chaos”. And the latter will be both inside and outside. Truly, Turkey will "float in a sea of ​​chaos."

Observed and commented on Oleg Chuvakin
- especially for topwar.ru
Ctrl Enter
Noticed oshЫbku Highlight text and press. Ctrl + Enter
We are
Results of the week. "So it is in Turkey ... It's warm there ..."Syria: Americans scare themselves, and Asma Asad buys chairs
48 comments
Information
Dear reader, to leave comments on the publication, you must to register.