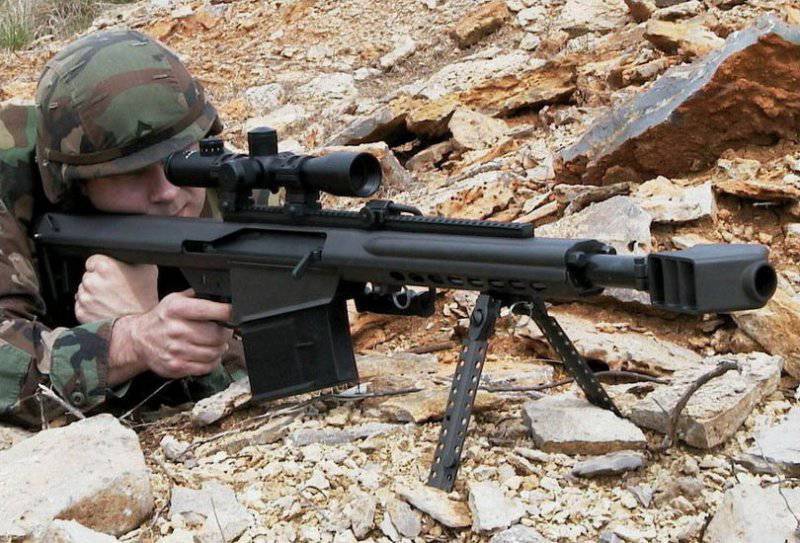 The anti-material rifle is not designed to destroy enemy manpower, but to destroy material objects using elements of armor.
After creating the sword, they immediately seek to create a defense against it - a shield.
The development of armored vehicles and equipment, the constant build-up of armor on them, sharply raises the question of protection and the means to combat them.
The main types of personal weapons for the destruction of armored vehicles were as far as the creation of grenades, anti-tank rifles, grenade launchers, unguided and guided anti-tank missiles and other developments in this field.
The idea of ​​combining a grenade launcher and a sniper rifle is not new, American designer R. Barrett picks up the baton of ingenuity and designs armor-piercing weapon called XM109.

Немного stories
The Barrett XM109 weapon is rooted in the OCSW and OICW programs - the creation of new grenade launchers using ammunition with the possibility of a controlled detonation, high explosive and penetrating power. For various reasons, the projects of the OICW program are almost all frozen. And projects of the OCSW program pass tests and completions.
It was within the framework of the program that the Barrett Firearms company began the development of principled weapons to combat armored vehicles.
We can be proud of the fact that it was the Soviet automatic grenade launcher AGS-17 that pushed the American designer to the idea of ​​using grenade launcher in a large-caliber Barrett M82A1 rifle. Technically, the M82 rifle could have used larger ammunition, so there was no need to create a weapon from scratch, but simply upgrade the sniper rifle for grenade launcher ammunition.
The idea was called Objective Sniper Weapon - sniper target weapons. The project was based on a large-caliber sniper rifle.
Ammunition for the new development was selected 25x59 grenade.
Grenade ammunition already had weight in military affairs, was characterized by small dimensions, stable flight path, as well as the possibilities to be used in individual weapons.
When used in a new project, grenade ammunition was deprived of the ability to control the detonation, which ultimately reduced the cost of the project, since the use of high-tech solutions entailed a substantial increase in the cost of weapons in general.
Another reason for the rejection of programmable elements - the fire from the weapon will be produced by clearly observed and specific units of armored vehicles.
But the designers did not completely abandon the idea of ​​guided grenade ammunition and continue to conduct research and testing as part of the development of the entire OCSW program.
Prospects for the program - the creation of grenade ammunition and the use of various combinations of gases, ammunition with disguised properties instead of a warhead.

As further tests of the weapon showed, the choice of this grenade ammunition was the right decision - Barrett XM109 punched 40-mm armor from a distance of half a kilometer.

Creating Barrett XM109
When designing this type of weapon, the designers did not want to make major changes to the Barrett M82A1 design, but wanted to achieve maximum similarity with their own production rifle.
As a result, one of the few changes in the rifle has undergone the barrel, the upper part of the trunk box, the store and the new DTK.
The barrel turned out a little shorter, naturally caliber 25 mm, while it became more significant due to the use of powerful grenade ammunition and cutting with the direction to the right.
The accuracy of the rifle was not damaged, at a distance of one and a half kilometers its accuracy is comparable to the original - the M82 rifle.
The muzzle compensator turned out to be very interesting, its effectiveness is visible when it is used on the Barrett M82A1 rifle, it simply does not allow the ammunition to be loaded.
A self-made muffler is installed on the barrel. It was made specifically for the HM109.
Stembox modifications — the 2 extras and the 1 standard return spring are installed. Additions are natural, since the ammunition is used more powerful, the extraction of the spent shell has been structurally improved, and the wear of the working parts of the barrel box has been reduced.
Changes in the store are also caused by the use of a new ammunition, slightly changed the feeder and the spring.
The rest of the rifle design remained unchanged, we can say that this anti-material rifle is an upgraded Barrett M82.
The XM109 is equipped with the BORS optics system. The shooter catches the desired object in the sight and receives information from the BORS system. Uses the information received to fire a shot and opens fire.
The BORS system is also commercially available in the civilian market, and can be used for any exact weapon.
Included with the rifle can be various attachments for installation on various equipment (helicopters, cars, armored personnel carriers, boats). 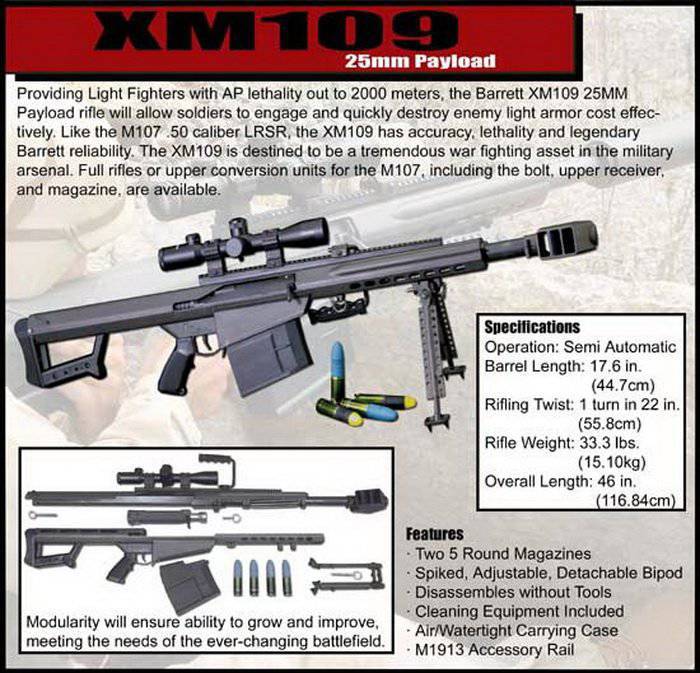 Destiny Barrett XM109
For various tests were collected ten test samples. In the 2004-2005, anti-material rifles showed the expected results, the samples were fully consistent with the declared reliability.
The main drawback is the excess of the permissible level of return in firing (meaning the excess of American standards).
Although one of the writers describing XM109, having tried to fire from a sample of weapons, said that the recoil is quite normal, the weapon did not leave bruises and bruises on the body, butt did not hit the body.
So, due to the excess recoil, the project called Barrett XM109 is currently frozen. Perhaps the company will soon solve the problem of return, and we will see a real killer of armored vehicles.