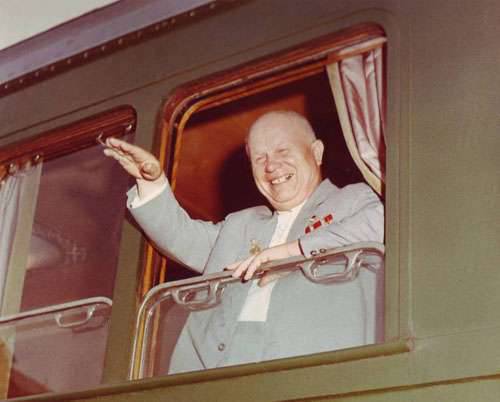 N. Khrushchev not only undermined the country's agriculture, laying under it "mines" that would undermine the development of this industry for decades, but also caused serious damage to the industry. It was under Khrushchev that Stalin's big projects were destroyed, which continued the development of the infrastructure of a huge country and formed the foundation of the world's greatest superpower. In addition, under Khrushchev, the Soviet Union began to focus on the import of goods, and dependence on imports was created, which after the death of the USSR acquired a character that undermines the country's national security.


Almost immediately after Stalin’s death (or murder), the Stalinist economic policy was abolished de facto by a decree of the USSR Council of Ministers dated 21 in March 1953. But Stalin’s policy in the development of the national economy allowed the USSR to destroy the gap from the advanced Western powers in one jerk; to prepare the country for war with virtually all of Europe, led by Hitler's Germany, and to win this terrible war; in the shortest possible time to restore the destroyed economy; show great growth rates - “the Soviet miracle”; to make an unprecedented breakthrough in the field of military, rocket, nuclear (including the peaceful atom) and space technologies, etc.

Hiding behind the fact that the development of a number of infrastructure projects in the field of hydraulic structures, railways, highways and enterprises, “is not caused by the urgent needs of the national economy, The USSR Council of Ministers decided to stop building:

- railways and highways: the Chum-Salekhard-Igarka railway (the so-called Polar Transsib, which is of great strategic and economic importance for Russia), including ship repair shops, a port and a village in the Igarki region; Komsomolsk — Pobedino railway; tunnel under the Tatar Strait; Apatity — Cave — Ponoy railway; railway Varfolomevka — Chuguevka - Olga bay; Chuguevka — Sergeevka railway; Arkhangelsk — Ruchi — Mezen railway; Krasnoyarsk-Yeniseisk railway; the railway Petropavlovsk-Kamchatsky — Ust-Bolsheretsk; motorway Ust-Bolsheretsk — Ozerovsky fish factory; highways on the Kola Peninsula, in the Arkhangelsk and Murmansk regions and on the coast of the Baltic Sea;

The ministries obliged, within two weeks, to work out and submit to the USSR Council of Ministers measures for the conservation or liquidation indicated in the constructions. In particular, the Ministry of Defense was supposed to stop picking up two road-building divisions, which were entrusted with the construction of the Petropavlovsk-Kamchatsky-Ust-Bolsheretsk railway and the Ust-Bolsheretsk-Ozerkovsky fish factory; to disband the road military construction units formed to carry out road construction works on the Kola Peninsula, in the Arkhangelsk Region and on the Baltic Sea coast.

It is worth noting that, under Stalin, even at the beginning of 1950-s about 20, the economic and transport research institutes of the USSR and before 40 all-union and republican ministries of economic profile presented a jointly developed forecast of disproportions in the Soviet economy. It was reported that in many regions it is necessary to develop energy, industrial capacity, including on the basis of local raw materials, as well as transport infrastructure. Otherwise, these regions will be less and less involved in trade with other regions. And this problem was the most urgent for the RSFSR (the modern Russian Federation). And these problems were planned to be solved with 1953 of the year.

It is characteristic that in some other Union republics only some projects were “frozen” or canceled. The situation was similar in the social bloc countries. “Stalinist” projects in the socialist countries were not canceled. Moscow has not audited plans for financial, economic, scientific and technical assistance from the USSR, including industrial, transport, energy, and other projects. As a result, the economic growth rates in all socialist countries from the middle of the 1950's to the beginning of the 1980's were at least one third higher than in the USSR and by half, or even twice as much as in the RSFSR.

Thus, at the expense of the indigenous Russian lands, the priority development of national suburbs proceeded, and the “fraternal” socialist countries supported, most of which, after 1991, easily switched to the NATO camp, spitting on the merits of the Russians in development from countries.

However, by the will of Khrushchev and Khrushchev, the industrialization of Russia was suspended. The industrial program 1953-1955 was canceled. In the USSR, emphasis was placed on agriculture and, mainly, on the development of vast virgin and fallow lands. It took time, big money, abandoned people and equipment. All this was allowed to be sprayed, on the unprepared and excessive development of virgin lands. But the worst thing is that a considerable amount of enthusiasm and labor pressure of the most energetic part of Soviet society went there. This seriously slowed down the industrial development of the USSR.

True, it is worth remembering during the reign of Brezhnev in 1960-x - the beginning of 1980-s of some of these projects still implemented. I had to recall the Stalinist projects. At the same time, no one dared to say that the “anti-industrial” government decree of March 21 of 1953 turned out to be erroneous or even criminal. Some of the Stalinist projects are also remembered in modern Russia. "Polar Trans-Siberian Railway", a tunnel under the Tatar Strait, the construction of railways and highways on the coast of the Gulf of Finland, the Baltic and Barents Seas, etc., are all relevant at the present time. Especially when the question of the survival of the Russian Federation is a new industrialization.

In this way, Khrushchev’s policy has caused enormous damage to the economy of the Soviet Union, and especially the RSFSR (Russia). First, due to the cancellation or long-term preservation of the projects of many ports and land arteries, the Soviet Union in 1960-1980-s (and for the same reason the modern Russian Federation) suffered great damage in the field of maritime transport, the development of ports and Overall, in the competitiveness of the domestic transport infrastructure. The USSR had to spend large sums on the transit of its goods through neighboring states. The same disease was inherited by the Russian Federation, which was forced to use the transit capabilities of the Baltic countries, Finland, Poland, Belarus, Ukraine, Turkey, Iran and China. At the present time, when Russia was on the verge of war with Ukraine and Turkey, and also under pressure from the US and EU countries, this problem has become especially obvious. And this is not only the problem of losing money, but strategic security, the stability of Russia in the conditions of the start of world war.

Secondly, the issue of disproportions in interregional transport and economic relations was not resolved.

Third, the problem of industrial and complex development of many regions of the RSFSR (modern Russia) arose. First of all it concerns the vast northern, Siberian and Far Eastern territories. For example, many areas of the Russian North, Northern Urals, Siberia, and the Far East of Russia are still either very poorly connected or not connected at all with each other or with other regions of the country.

Fourthly, the resources, funds and creative, creative potential of people spent on the priority development of the national republics of the USSR and the social bloc countries, to the detriment of the development of the core of the Russian (Soviet) civilization - the RSFSR-Russia.

In 1957, the course was set for the decentralization of the national economy. Branch ministries, allied and republican, were liquidated. Instead, they began to create economic councils (councils of the national economy) on a territorial basis. In one or another area, factories and plants, which often belonged to different departments and branches, began to be united under general management.

This led to chaos, disruption of supply and financing, severing of industry connections and other negative processes. As a result, economic councils began to be enlarged, republican, and then all-union, regional governments were created over regional ones. However, the situation is not straightened. After the resignation of Khrushchev, it was decided to abandon economic councils and return to the sectoral management system. Industrial ministries restored.

There were other "imbalances." Under Stalin, during industrialization and post-war reconstruction, priorities were given to heavy industry, the production of means of production. Then it was justified. However, under Khrushchev, the bias in favor of heavy industry even exceeded that of Stalin. If in 1954, heavy industry accounted for 70% of products, by the beginning of 1960-s, the list reached 75%. Consumer goods simply began to disappear from the shelves. And this while the destruction of agriculture - virgin, corn, meat, dairy campaigns.

It would seem, what business can be under Stalin? Many immediately recall the stereotypes lost from school: the command-administrative system, the planned economy, the construction of developed socialism, the NEP have long been covered. However, under Stalin, entrepreneurship developed, and even very powerful. So far, Trotskyist Khrushchev in 1956 did not cover and liquidated this sector of the national economy along with the private plots permitted under Stalin.

Under Stalin, it was a very strong sector of the country's economy, which even during the war years produced weapon and ammunition. In Stalin’s USSR, entrepreneurship — in the form of production and trade artels — was strongly and fully supported. As a result, in the Soviet state, after Stalin, there remained 114 thousand workshops and enterprises of various directions - from the food industry and metalworking to the jewelry and chemical industries! About 2 million people worked at these enterprises; they produced almost 6% of the gross industrial output of the Union. Moreover, artels and cooperatives produced 40% of furniture, 70% of metalware, more than a third of all knitwear, almost all children's toys. That is, entrepreneurs played an important role in light industry, the most problematic sector of the Soviet Union. About 100 design bureaus, 22 experimental laboratories and even two research institutes worked in the business sector.

Enterprises produced not only such simplest objects as children's toys, but practically all the necessary household items: in the post-war years in the provincial backyard, up to 40% of all items that were in the house (dishes, furniture, shoes, clothes, etc.) ), as well as complex objects (the first Soviet lamp receivers, the first radio radiators in the USSR, the first cathode-ray television sets).

Thus, a special model was actively formed in the Stalin Empire, when private entrepreneurship rationally supplemented state industry; entrepreneurship developed now, productive, not parasitic-speculative, spawned during the years of Gorbachev's “perestroika” and the liberal reforms of the 1990's.

Khrushchev "perestroika-1" destroyed all this. Within a few years, many of what was cultivated, grown for decades, was destroyed. In 1956, it was decided by 1960 to fully transfer to the state all the artisan enterprises. They made an exception only for small-scale consumer services, art crafts, and artels of disabled people, but they were forbidden to carry out regular retail sales of their products. Art property was alienated free of charge. It was unfair. The property of the artels was honestly acquired by hard work and often by the efforts of many years and even decades. This property served society, was productive. Private production, which organically supplemented the state industry, was destroyed.

Ctrl Enter
Noticed oshЫbku Highlight text and press. Ctrl + Enter
We are
"Khrushchev" as the first restructuring"Khrushchev" - the first experience of "perestroika" in the USSR
113 comments
Information
Dear reader, to leave comments on the publication, you must to register.