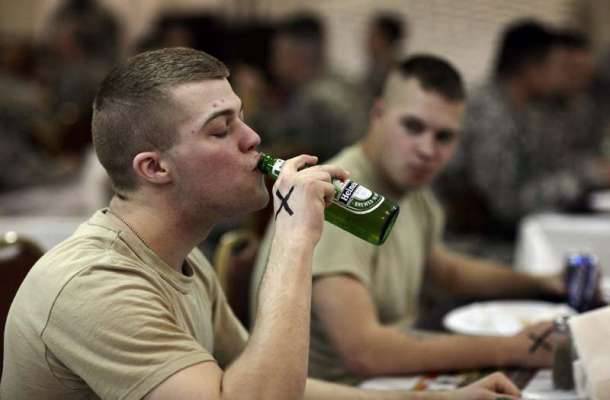 In the evening of February 27, employees of the Aqua water amusement park in Druskininkai (Lithuania) were forced to call the police. According to them, a drunken US soldier broke down the protective wall separating recreation and entertainment areas. Where would you think? .. In the area of ​​"Mother and Child" ... Among other things, the military refused to pay for damage to the water park property in the amount of 200 euros.

The incident was attended by the American military from the European Third Division of the Second Cavalry Regiment of the US Army (Wilsek, Germany), who are currently serving in Lithuania, who came to rest in an aqua park from the "difficult" military service. According to eyewitnesses of the incident, about 20 military arrived from Rukla in three minibuses and spent their leisure during 4 hours. The incident occurred when one of the drunken companies could not maintain balance, fell on a protective wall on the second floor of the water park, where the so-called “Mother and child” zone is located, and broke it. Fallen young man from the floor raised colleagues. Representatives of the US Army arrived at the scene and took the military. Simply, hurried to hide behind the walls of the barracks.

Witnesses argue that between the drunk military a scuffle ensued, one of the participants of which, in fact, could not resist on legs heavy from the amount of alcohol consumed and broke a whole FENTER, which, as is known, is made of metal rods at the second level of the water park !!! Therefore, it is impossible to even imagine how a fighter from the USA could break this Fence ...

There is every reason to believe the visitors of the water park, who claim that the state of the American “Lithuanian masters” was, to put it mildly, not very good: they got drunk, behaved noisily, frightened the children with their behavior. Judge for yourself, any incident can be resolved on the spot, but if the police have already had to be aroused, then it is quite obvious that the GI behaved, say, even softer, not quite cultural.

Visitors to the water park noted that during their stay in an entertainment establishment, the US military literally occupied the ATM and spent its contents on drinks of various strengths.

Moreover, it seems to everyone, the question arises: “What did the“ guarantor of the world ”do in the“ Mother and child ”zone?” If this information about the incident still became known to the public, despite all efforts to prevent its spread, then the consequences of this ugliness reduced several times.

Why, then, the action of the Code of Administrative Offenses was canceled in respect of a certain category of offenders? Without a fine and protocol? Or are Americans in Lithuania above the Law?

In fact, it is forbidden to let visitors into the pool, and even more so in the water parks! Overlooked employees? Or scared?

One may not even be surprised that now the water park will be billed for moral damage to the “defenders” of Lithuania.

The moment came when Lithuanians should think about the goal of the Americans on their land. Fresh in the memory of the monstrous incident that occurred in Kiev, when four American soldiers raped two Ukrainian girls.

And if you take the ratio of the number of US troops in the Baltic countries to the number of incidentscommitted intoxicated with them in such a short period of time, on this indicator, the American GIs outdid all the armies of the world.

Ctrl Enter
Noticed oshЫbku Highlight text and press. Ctrl + Enter
We are
The agony of Lithuanian RussophobesWe were shouted: "Ivan - go home!"
123 comments
Information
Dear reader, to leave comments on the publication, you must to register.