They will go to the North 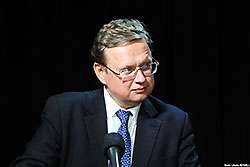 Russia's intervention in the Syrian conflict has thwarted Western plans to destroy another state with the help of international terrorist aggression. However, the difficulties created by the Islamic state and its partners from the so-called “moderate Syrian” opposition, which is banned in our country for terrorism, will only change the direction of the Islamists' expansion. Despite the ritual cackling of the State Department and no less ritual "alleged bombing," the Islamists remain strategic. weapons USA and their special services. The latter, more and more often, as far as can be understood, act independently - in the interests not of their own state, but directly of global monopolies.


With this in mind, the natural direction of further expansion of the Islamic state is Central Asia.

The liberation of Kunduz from the Taliban at the end of September - the first decade of October 2015, for all its importance, remained a tactical success that could not change the strategic picture.

The states of Central Asia, with the exception of Kazakhstan, are poorly managed and combine national wealth with the hopeless poverty of the overwhelming majority of the population, deprived of any intelligible rights and prospects. Therefore, they are not only fertile ground for the development of political Islam striving for justice in its most extreme forms, but also promise huge winners to their conquerors - not only resource and human, but also political, because the owners of the resources of Central Asia will necessarily be recognized by the West, even as a strategic counterweight to China and Russia.

Therefore, the path of the Islamic state objectively lies to the north. And before a breakthrough to the North Caucasus and the Volga region with the subsequent attempt to destroy Russia, he should objectively dig in the Russian civilization, which turned out to be an unowned “soft underbelly,” which temporarily abandoned its world-widehistorical roles and from their natural rights.

The specific breakthroughs are quite obvious. Uzbekistan, whose leadership is well aware of its strategic vulnerability, has mined the border with Afghanistan, and this “corporate identity”, with all its rudeness, seems to be the only effective one. The border with Tajikistan, almost transparent for drug trafficking, with the help of Russia can be effectively protected by its authorities, who have not yet completely lost the self-preservation instinct. Turkmenistan remains - and the dress rehearsal of the invasion was held last summer.

Actually, if its participants did not perceive it merely as a rehearsal, the racca bombing would lose its meaning: a not too large group of well-trained militants, despite the fragmentation and inconsistency (as always with the disgrace of a closed state) of information, would demonstrate the inability of the Turkmen state to self-defense quite convincing. Of course, the whole “modern society of the Internet” is not capable of resisting the “new barbarism”, which makes it possible to achieve amazing success with small forces. So, the two-million Mosul was taken by less than 2 by thousands of militants, and there was no talk of public sympathy: in the first week half a million were fleeing. Without quick help from Russia and Iran (the United States, in response to pleas for immediate support from the air, promised to consider the possibility of sending advisers in six months), they could take Baghdad possible. And in the “New Year's Sexual Jihad,” the smug rich Germany, accustomed to teaching life to all of Europe, was put at best on its knees by literally several thousand Muslims, armed only with phrases like “lift the skirt”.

The Turkmen authorities, having gathered all the armed forces and even the militia, repulsed themselves only with the greatest difficulty: in fact, the Islamists left, when and how they wanted, making sure they could return at any moment.

And because this spring is expected to continue.

The frightened leadership of Turkmenistan, as far as one can judge, has agreed with the United States to transfer to it a large Soviet military base in Mary, to organize protection from the Islamists. If this agreement is realized, we should expect a repeat of the scenario, with brilliance realized (hardly without the support of the United States) in Iraq: after concentrating on a key military base of modern American technology, including Tanks and howitzers, it is passed on to the Islamists, who thereby receive a decisive advantage over government forces.

Islamist aggression and the occupation of at least a part of the territory of Turkmenistan (if not its complete seizure) will allow the United States to stop supplying Turkmen gas to China, causing the latter a painful blow. Gas can be reoriented in connection with US strategic interests: either via TAPI to India (which will intensify its contradictions with China, complicating the development of BRICS, and weaken Pakistan’s orientation to China), or to Europe - to replace Russian gas in it and in Turkey.

At the same time, the Islamists will fundamentally strengthen their financial base and will receive an excellent base for fomenting the flame of jihad throughout Central Asia and, at least, in the south of Kazakhstan. At the same time, millions (or even more) of refugees are effectively disorganizing and destabilizing Russia - and all this without any formal US participation!

Therefore, for our country in the strategic plan, the aggression of the Islamic state should be redirected to Saudi Arabia - a rapidly weakening US ally, attractive to attackers due to the possession of religious shrines, open disregard of all and every rule of justice, including those directly dictated by the religious precepts of Islam, as well as obvious decline in management efficiency.

The direction of Islamist aggression will largely determine the future of the world, and it’s time for Russia to begin to fully use the American principle of implacable and unconditional punishment for hostility while simultaneously supporting friendly actions.

Ctrl Enter
Noticed oshЫbku Highlight text and press. Ctrl + Enter
We are
Western countries' interest in the Islamic factor in post-Soviet TatarstanTatarstan authorities will restore order in the republic - Sharia
56 comments
Information
Dear reader, to leave comments on the publication, you must to register.