US and China: Washington "Extremely Concerned"

March 2 2016
26
The United States announced its intention to increase the number of operations involving military ships to ensure freedom of navigation in the South China Sea and accused the Chinese authorities of "militarizing" the situation in the region. In response, China expressed the hope that the United States would stop heating up the situation around the sea. Experts believe that China, taking advantage of the confrontation between Russia and the West, took up the strengthening of its position in the South China Sea. 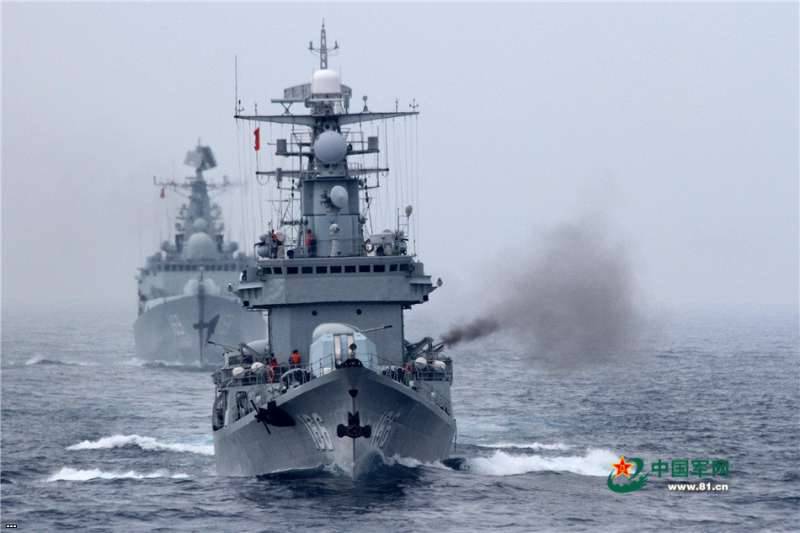 February 26 TASS delivered a statement from Daniel Kritenbrink, Senior Director for Asian Affairs at the National Security Council of the White House, who spoke at the Washington-based Center for Strategic and International Studies.

The United States urges Xi Jinping to extend its promise "not to engage in militarization" of the Nansha (Spratly) islands to the entire South China Sea, said Kritrenbrink. “We believe that it would be good if he (Xi Jinping) would extend his promise to refuse militarization to the entire South China Sea,” a US administration official quoted TASS. “We will call on our Chinese friends and other countries in the region to refrain from taking measures that increase tensions.”

Kritrenbrink stressed that China should respect the future decision of the international court on a dispute with the Philippines on the islands in the South China Sea, which is expected this year.

In another message TASS, from 23 February, cites the opinion of the head of the Pacific Command of the American Armed Forces (PACOM), Admiral Harry Harris. He believes that Chinese authorities are seeking hegemony in East Asia.

Responding to a request to name the strategic goals of the “militarization of the disputed islands of the South China Sea” Beijing, the admiral noted that the PRC “is striving for hegemony in East Asia” and regional control. Bulk work and military build-up change the operational environment in the South China Sea, Harris is convinced.

According to him, the bulk works, including the construction of airstrips, as well as anti-aircraft missile systems, radars and other military equipment that Beijing places on the disputed islands, militarize the South China Sea. In addition, Harris believes that the ships in service with the Chinese Navy, along with those under development, "pose a threat to American cargo ships."

“I believe that we have the opportunity, if necessary, to do what we have to do,” he concluded.

China hopes that the United States will stop aggravating the situation around the South China Sea, spokesman for the Chinese Foreign Ministry Hong Lei told 26 in February at a briefing.

“We hope that the countries concerned will stop heating up the situation and stop lying about the South China Sea,” said Hun Lei, who commented on the latest statements by Harris, RIA News".

“What he (Harris) is doing is trying to sully the reputation of the PRC and justify the actions of the United States in the South China Sea.” But no matter how many times he speaks about it, the facts remain facts, ”the representative of the Ministry of Foreign Affairs of the PRC stressed.

As for the growth of “tension” that US officials are talking about, analyst Sergey Manukov ("Expert") recalls that in the media at first information appeared about the placement of missiles by the Chinese on those disputed islands, some of which were artificially built up with the help of sand. Then we talked about the Chinese fighters on the islands. Now the media in the West have already reported on the construction on the Spratly archipelago of space for radar, which will allow to control the South China Sea.

The Washington Center for Strategic and International Studies came to the conclusion. The basis for it was satellite imagery from February 12. On the islands of Quarteron Reef, Gaven Reef, Hughes Reef and Johnson Reef, according to experts from the Pentagon and CSIS, constructions similar to a radar center are being built. With the help of high-frequency radar you can monitor the ships and aircraft. True, the Pentagon admits that ocean currents can also be measured with such radars.

The results of the CSIS study were published a week after Washington accused Beijing of deploying two anti-aircraft missile batteries with 8 HQ-9 complexes equipped with ground-to-air missiles on another uninhabited island in the South China Sea, the analyst said.

To this should be added at least a dozen fighter jets J-11s and JH-7s, discovered by observers on Woody, the largest island of the Paracel archipelago in the northern part of the sea.

What leads to the rise of the notorious "tension" between China and the United States?

"China took advantage of the growing confrontation situation between Russia and the West and now abruptly took up the strengthening of its position in the South China Sea," said "Free Press" Leading expert at the Center for Military-Political Studies MGIMO, Doctor of Political Sciences Mikhail Alexandrov.

According to the scientist, China wants to create strategic superiority over the United States in the South China and East China Seas. In the future, this will allow Beijing to annex Taiwan, and also prevent the US naval forces close to its coast. In the end, the Chinese coast will be inaccessible to the American aviation (except for strategic bombers). Also in this case, US forces will not be able to block China’s maritime communications. But China itself will be able to block any communications in the region, including those that go through the Strait of Malacca.

“Beijing is creating for this a system of islands that host the newest weapon. I should note that the Chinese fighters J-11 and JH-7, located on Woody Island, are superior to the US Navy aircraft - in particular, the main combat aircraft F-18. Even the American F-35, I believe, will not be able to with the newest Chinese fighters, since naval front-line aviation is traditionally weaker than the ground.

On the other hand, China has signed a contract for the purchase in Russia of multifunctional newest Su-35 fighters, which will ensure complete air supremacy over the South China Sea. In the end, the Americans will not be able to accommodate the newest F-22 on their carrier group, and, as recent data show, the F-22 is not so terrible as it was ground. ”

The expert believes that Beijing is doing the right thing in this case. The United States lacks the resources to resist all potential adversaries. As a result, Beijing will first dominate the South China Sea, and then "chop off the disputed Senkaku Islands from the Japanese, and there too will create a naval bastion." This will allow Beijing to take control of the East China Sea.

As a result, we will add on our own, the “tension” that the US military and politicians are saying will only increase. Where it leads? To the third world war? Or to a major local confrontation between the United States and China at sea? Hardly. The United States really sprayed its forces, trying to preserve the status of a world hegemon, and China cleverly took advantage of this.

However, regional defense of the Celestial Empire is quite possible. For example, in the form of missile defense and in the form of more active involvement of the allies - primarily Japan, which, in fact, argues with China over some islands. South Korea will not remain “unreached”. As a result, “tension” will lead to an increase in the arms race in the region, historical the cause of which is likely to be considered China.

Observed and commented on Oleg Chuvakin
- especially for topwar.ru
Ctrl Enter
Noticed oshЫbku Highlight text and press. Ctrl + Enter
We are
Strangulation: the context, conduct and consequences of the American naval blockade of ChinaPreliminary evaluation of the prototype of the unobtrusive Chinese fighter Chengdu J-XX [J-20]
26 comments
Information
Dear reader, to leave comments on the publication, you must to register.