February 29 2016
40
Even when he was a cadet, he was used to reading the foreign press. Not because it somehow added knowledge. The interest was purely professional. Western designs weapons were on their TTX similar to our "secret". And to prepare for exams it was lazy to go to the secret part and work there. That's why we were preparing for Western publications and one Soviet magazine. Time has passed, but the habit has remained. 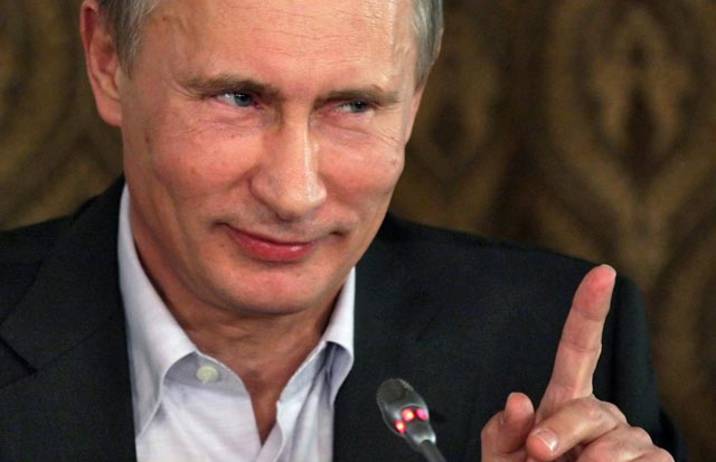 That’s probably why this article was written. Thank you to the Washington Post. It was the editorial of this February edition of 26 that caught my attention.

American journalists, with their intrinsic meticulousness, are proving to the citizens of the United States, and therefore to "the whole democratic world", that Russia is a monster. A terrible monster with whom normal people cannot have normal relations.

Talking about the greatness of Russia today in the United States is not accepted. Great Soviet Union they won. And a great fragment is never great. Yes, and other materials of the publication are just aimed at creating from our country the image of the dying outskirts of a democratic world.

But the Americans would not be Americans if they had not found the reason why Russia should be afraid. The attentive reader already understands what I mean. The reason for fear is Putin! It was Putin, who managed to become a leader. Not one of ... Namely, the leader with whom the US has to reckon. Therefore, the article looks like a story at night in a pioneer camp. Remember: in one black, black room there lived a black and black aunt ...

It would seem that can disturb the Americans? Right. Worried Americans Putin.

"President Obama and some of his high-ranking assistants are skeptical about the partial cessation of violence, which is due to start in Syria on Saturday, and for obvious reasons. Russian President Vladimir Putin has repeatedly agreed to a truce in Syria and Ukraine, but never did not observe. "

It seems to be nothing terrible. Simple anxiety. We also think about whether the parties, including the Americans, will abide by the agreement. However, the stone is abandoned away. If Obama is worried, then who is the main initiator of the whole process? Thanks to whom the Syrians are returning home today? According to The Washington Post, certainly not thanks to Russia. Strong America made the Russians talk.

Poor Americans are told that all negotiations with Russia are puff. Putin only fulfills the agreement when it is beneficial to him.

"If a lull actually begins and humanitarian convoys get to their destination, it is only because Putin considers it to meet his strategic interests. This is the true meaning of the truce: it gives Russia control over what is happening in Syria."

Thousands of Russian soldiers, according to the head of the American intelligence service, are not fighting in Syria to take everything and stop. The US Army is developing "exotic weapons" precisely in order to curb the aggressive Russian. We'll talk about weapons tomorrow. Today about what it is for? What a tantrum?

Well, the adoption of the next military budget is understandable. The Pentagon needs money. And a lot of money. And bank "accountants" are already asking why. No one spends as much money as the Americans spend on the army. And the return on these costs is less and less. So that? The answer is in the following quote from the article.

"Without a doubt, Putin hopes that such a demonstration of its significance and, possibly, a reduction of Russian raids on hospitals and other civilian facilities in Northern Syria will prompt some countries to insist on lifting EU sanctions from his regime - despite the fact that he violates the truce them in Ukraine. "

Here is where they bury this very long-suffering "dog." Two simple answers to a deeply hidden question. The first is European countries that increasingly “squeak” from the harm of sanctions. And the second is Ukraine. Here is another "black dog laundering". The one that is already repeatedly trying to make white.

Europeans make it almost straightforward that no one will allow them to lift sanctions. In war, as in war. Losses are not only the enemy. And this must be tolerated. Especially when the losses are borne by the "soldiers" of the European continent, and the generals are sitting on the American. So, European politicians face very "hot" days. On the one hand, the iron hand of Americans in a causal place, and on the other hand, their business, their people, who are increasingly pressing on the "throat."

With Ukraine, too, everything is not smooth. Recent events are pushing the idea that the reforms are really ripe. But not those for which the Ukrainians galloped. "Race" reforms can not be carried out. Too much more to break. But the radicals must be demolished from the political scene. Any ways, but be sure to tear down. And it is easiest to do this in the period of "victories". And where to get these victories? In economics? In international relations? In ideology? Alas, even Americans understand that in these areas of life Ukraine is far from the best "African" country.

It remains a military confrontation with the people's republics. That is why there is a sharp aggravation today in LDNR. Victory or death.

But back to the article. What do the Washington Post journalists offer? The answer is obvious to any civilian. If there are planes, then there is something to shoot them down. This means that the United States must supply anti-aircraft complexes to the "rebels". Simply? Really easy.

Only have a couple of nuances. And quite obvious to the military. First - where are the guarantees that these complexes in some incomprehensible way will not prove to be the "enemies of America"? And the second. What is really possible to shoot down Russian aircraft, it is worth it. But this is not important. Syrian peasants simply can not use them. And the third. On every tricky part of the human body there will always be another part, from which the cunning and wise will suffer.

“There is no consensus on significant measures to limit Russia's military actions, for example, by supplying anti-aircraft weapons to rebels”

"Of course, it is the passivity of American politics that gives Putin the opportunity to act in Syria, as he pleases."

And at the end of the article is the classic "we are not local." Well, you can not talk about your weakness without "push on a tear." How else to push the reader to think about their fate. The one that can be without another budget increase.

Sometimes I catch myself thinking, when will the next UFO boom start in the USA? The topic of the fight against Russia, and now also with China, is already so full of teeth about everything that causes more gag reflex than interest. Those who are really interested history world, know perfectly well where and what happened and is happening. Modern politics, like modern culture, is just a deja vu. Nothing new. A competent person will always find the answer to today's questions in history. Just look at what is happening, dropping the "background".

Ctrl Enter
Noticed a mistake Highlight text and press. Ctrl + Enter
We are
Results of the week. “A terrible holiday spirit was hovering in the air.”Results of the week. “In our cooperative, the board is always agreed”
40 comments
Information
Dear reader, to leave comments on the publication, you must to register.