Who put the question here: the Turks or Tatars?

February 29 2016
28
We are not far off next (it sounds better than the "second") anniversary of the referendum in the Crimea. Whatever some political corpses like Kasyanov say (that he will give the Crimea back to Ukraine), if this happens, it is clearly not during my lifetime. And, accordingly, not with him. And in reincarnation as a Buddhist, I do not believe. 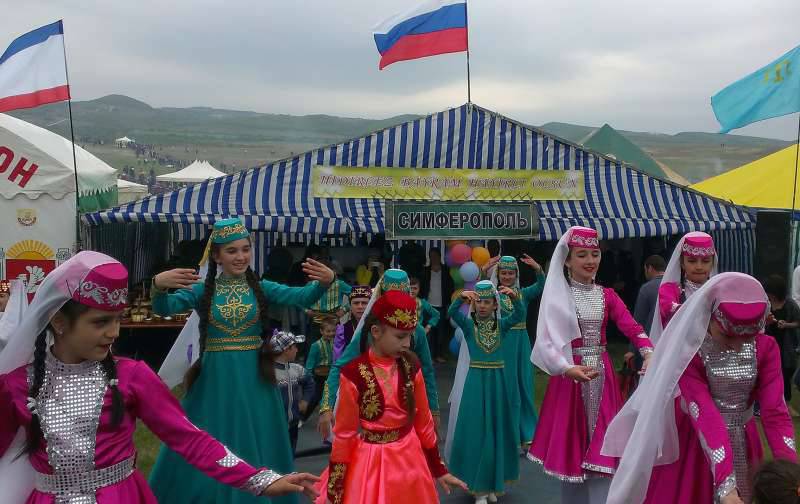 But it makes sense to recall some moments preceding and following the referendum.

I, in fact, about the problem at that time - about the Crimean Tatars.

The problem apparently existed. Since there were clashes of opinions, and clashes of people. And the prospects we drew not the most optimistic: and the attacks, and open opposition, and almost formed underground. Remember? It was? It was...

And there were prerequisites that began in the USSR. When the evicted Crimean Tatars and their descendants began to gradually leak back to their homeland. Where, it should be noted, no one met them with open arms.

But the Soviet Union ceased to exist, and the Ukrainian stage of the life of the Tatars began. Is it possible to say that under the new regime the Tatars began to live better? Definitely not. Moreover, for almost a quarter of a century, the Ukrainian authorities successfully treated the Tatars with promises that no one was going to fulfill. What for? Frankly dissatisfied Tatars were quite successfully used as a tool for introducing discord on the territory of the peninsula. Especially among pro-Russian residents. Especially before the next election.

However, in full accordance with the Russian proverb that the holy place is never empty, it is quite natural that there were those who saw in the Crimean Tatars something more than a tool for election games.

It all started with the Majlis. It was 1991 year. It was then that this ... education was created. The Ukrainian authorities did not officially recognize him, but informally, in every possible way they made of the Majlis some layer between themselves and the Tatars themselves. It is very convenient, in principle: you yourself deal with the problems there, and we will connect at the end.

And the Majlis has become quite a mighty structure with possibilities. And the opportunity came when the money came. And the money came, of course, not from the Ukrainian budget. More precisely, far from Ukrainian. Yes, Ukraine from time to time allocated funds for the so-called "resettlement of the Crimean Tatars". And these funds also quite successfully mastered the Majlis. And the results of the independent construction of huts by the Tatars themselves can be seen today.

But only if the Ukrainian budget? By no means. Assistance to Turkish Tatar communities, various Muslim foundations, and, finally, "fraternal" assistance from Turkish government structures.

Does it make sense to ask the question of which structure plan is usually interested in such funding? I think no.

And the money that flowed from Turkey, and humanitarian flows, from medicines to building materials, all went to the Crimean Tatars with one goal: to strengthen and multiply not just the Crimean Tatar community, but the community that is controlled by Turkey.

The Turks really aimed to repeat the Kosovo scenario, when, with active support from outside, the Muslim part of the Albanians did not just become a factor that changed the ethnic structure of the region, but also managed to dominate the region.

This really suited Ukraine, since everything that was done in spite of Russia and the pro-Russian-minded residents of Crimea was considered beneficial.

True, it did not occur to the Ukrainian authorities that the Tatars, like the Albanians in Kosovo, from the minority in 20-30 years could well have become the majority. Indeed, besides stimulating birth rates, in many regions of the Crimea, there were also processes of “squeezing out” the Slavic population, creating an atmosphere of rejection towards Russians and Ukrainians. But the Ukrainian guardians stubbornly led the Crimea to the status of the "northern gate of Turkey."

However, the year 2014 th broke off all the masks. Frank anti-Russian hysteria has done its job. And even the Tatars were worried, for the mood of the new government showed that not everything will be smooth and smooth. Have you heard the phrase that "Crimea will be either Ukrainian or empty"? Here and in the Crimea heard. Including the Tatars.

Yes, the percentage of turnout for a referendum among the Crimean Tatars was lower. Yes, who voted for joining Russia, God forbid that there be half. That's a lot, especially considering everything that happened throughout 23 of the year. And enhanced feeding from Turkey.

It is clear that Turkey, which seems to be ready to help and support, is there, over the sea. And the fascist gentlemen in Kiev who have flown off the coils frankly are much closer. And the "green men", who just had to become "polite people", were nevertheless already on their bases in the Crimea.

Plus, two visits to the Crimean Tatars that did not go unnoticed. I'm talking about the visits of Shaimiev and Kadyrov. Of course, Shaimiev explained how the Tatars live well in Russia. And, apparently, was authorized to guarantee the integrity of the business. Given that the vast majority of the Crimean Tatars work in the field of tourism services, this was an important aspect. Well, and probably painted the advantages in the light of the floods of Russians who rushed to rest.

Specific information was received from N.N. Shaydullina, Assistant to the State Adviser of the Republic of Tatarstan.

“The fact is that Shaimiev never visited Crimea. In March, 2014 met in Moscow with Mustafa Dzhemilev - there are official sources. But I did not go to Crimea. We hope that you will correct your“ mistake ”.
Thank you in advance. "
Assistant of the State Advisor of the Republic of Tatarstan N.N. Shaydullina

Kadyrov, of course, was not talking about business. Most likely, he told with examples from Chechnya how to solve issues with those who do not want to live peacefully and work calmly.

A sort of "carrot and stick".

Apparently, the pragmatic Tatar elders made the wisest decision: neutrality, and then we'll see. And, as if by the wand, the Tatar flags disappeared from the confrontation with the Russian ones, and the referendum went smoothly and almost without incident. And by its results it was quite obvious that the Tatars voted the way they wanted: more or less close to the Majlis were against, and those who were not allowed to distribute the Turkish pie - respectively, for.

And these promises were fulfilled. Tatar nobody touched these two years. Except, of course, those who immediately flew into the forbidden lists, Majlis and members of the Hizb ut-Tahrir sect. But it should be noted that "blizzard" only those who remained in the Crimea and continued the old business. The rest quietly left for Ukraine and then they showed themselves in the “blockades”.

But at that moment, even sensible attempts to destabilize the situation were not undertaken. Apparently, Kadyrov’s arguments were killer.

And the business elite quite normally changed the vector from Ankara to Kazan. Business, nothing personal.

Of course, the Tatars who left the Crimea are not idle. Quite often there is information about contacts of the “Crimean Tatar people in exile” with representatives of various Turkish organizations. Including with the well-known "Gray Wolves." Yes, and the runaway members of Hizb ut-Tahrir were fed from the same bowl with the wolves. So here everything is clear and true.

Of course, the virtual "Tatar Crimea", as well as the same "Ukrainian Crimea", still excite the minds in Ukraine and Turkey. Work continues at full speed.

Only now the stronghold of the "Crimean Tatars who are not in the Crimea" is gradually becoming the Kherson region. A sort of springboard for attack. And there the Turks are again spotted. What is, by the way, the opening of the daily flight Kherson - Istanbul. Not every international airport in Ukraine can afford this. Okay, Kiev or Dnepropetrovsk, but depressive Kherson ...

Unfortunately, the Tatar question continues to stand behind us. And it was set up mainly by the Turks, whom the dream of the “northern gate” does not allow to live in peace. And in the light of the completely spoiled relations between the two countries, there is no reason to expect the Turks to stop supporting the frankly destructive actions of the Majlis and other structures banned in Russia.

And the rest in the Crimea, among the Tatars, everything is calm. Yes, the owners of hotels and other establishments in the tourism industry will have to work for some time to adequately satisfy Russians who were suddenly spoiled by the resorts of Turkey and Egypt, but as evidenced by those who visited Crimea in 2014 and in 2015, there is a trend towards development.

Ctrl Enter
Noticed oshЫbku Highlight text and press. Ctrl + Enter
We are
Russia, Turkey and the "Crimean Question"Crimean Tatars should not become "cannon fodder" in the Big Game against Russia
28 comments
Information
Dear reader, to leave comments on the publication, you must to register.