March 3 2016
12
This is a continuation of an article about the Romanian frigates of the 21 of the 20th century. The first part is HERE.

Since I was deep in history, I will remind you something in brief. Great Britain reduced the number of its fleet. The frigates of the first series of type 22 were also reduced. Two of them were used as targets (shot and sunk), one was scrapped, and the rest began to be offered to third world countries from South America. Romanians also pecked, who were eager to join the North Atlantic Alliance and were in a hurry to acquire Western types of equipment and weapons, so that they corresponded to NATO standards. 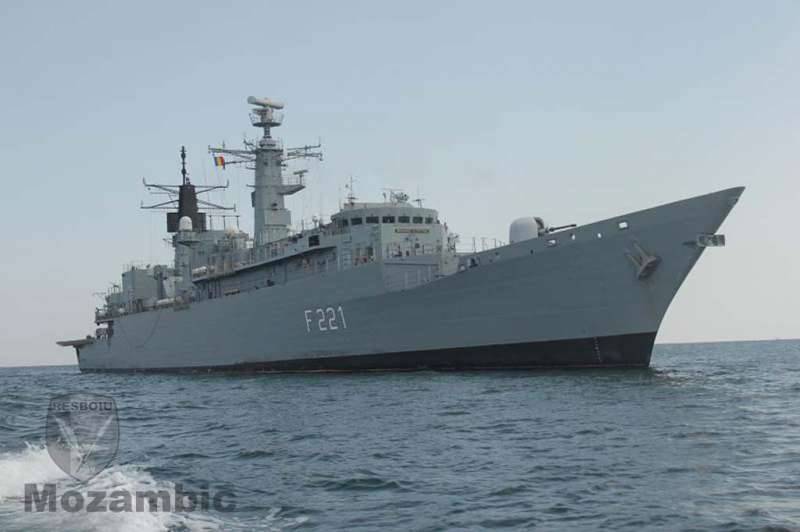 The flagship of the Romanian Navy frigate “Regele Ferdinand” (F221)

14 January 2003 Romania signed a contract with the United Kingdom for the purchase of the frigates HMS Coventry (F98) and HMS London (F95) that did not write off. On the same day, the frigate HMS Coventry (F98) was renamed “Reghel Ferdinand” - inheriting the name of the decommissioned leader of the destroyers who was part of the fleet of destroyers of the Royal Romanian Navy before and during World War II.

Help.
Regele Ferdinand (King Ferdinand I of Romania). Full name: Ferdinand Victor Maynard Albert. Dynasty: Hohenzollern-Sigmaringen. Also known as “Ferdinand Loyal” and “The Unifier of Romania”. He betrayed the interests of the house of Hohenzollern and entered the First World War on the side of the Entente. After WWI expanded the boundaries of the Romanian state: Transylvania, Bucovina and Bessarabia were included in its structure. Developed and carried out the agrarian reform, granted all citizens of the country regardless of gender, race, nationality and origin universal suffrage.

Before the transfer of Romanian ships, both ships were upgraded in Portsmouth. Presale preparation looked like this: a major overhaul of power plants and other mechanisms was carried out, sets of radioelectronic equipment were replaced with new ones, but more simplified, and their weapons were subjected (I am not afraid of this word) to castration. Both frigates were completely dismantled missiles (RCC "Exochet", SAM "WI") and artillery *. In order to cover the eyes of the Romanians, instead of dismantled anti-ship missiles and anti-aircraft missiles in the nose of the frigates, they installed one 76,2-mm Melara OTO universal ship-mounted system.

The table shows the data on the arming of ships before and after their sale to Romania. As the saying goes, "Feel the difference."

* Some sources say that the British left the torpedo tubes for the Romanians and sold the Stingray torpedoes to them, but I believe that they were installed again a few years later. 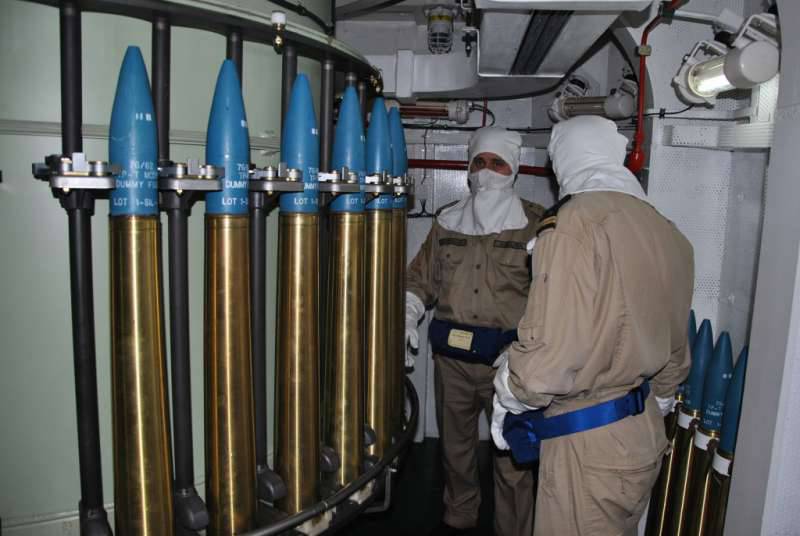 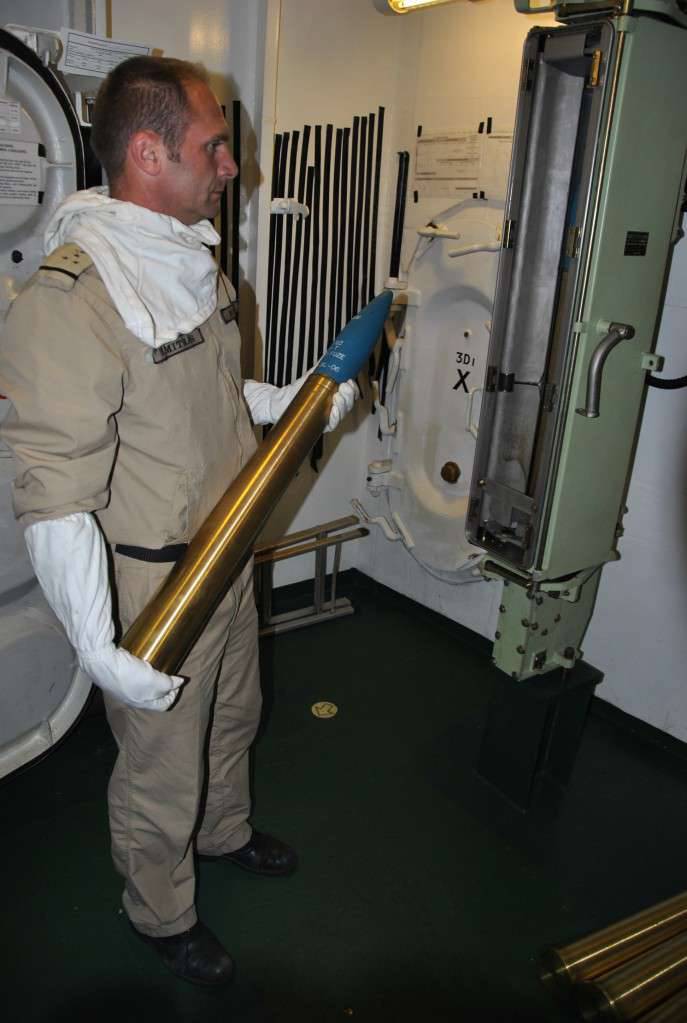 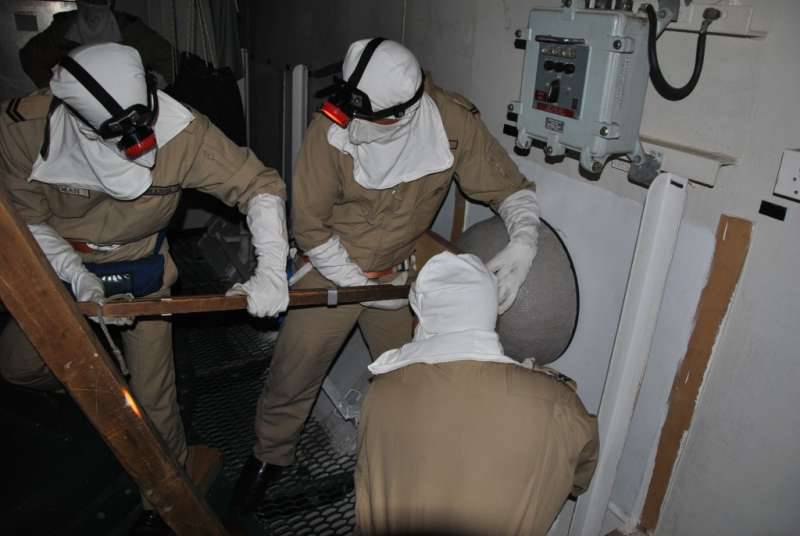 Out of the fire control equipment, one Radiation 2500 optoelectronic control system and NAUTIS 3 anti-mine action control system was installed on each ship. Judging by the photographs I obtained, helicopter hangars of frigates were subjected to some alterations. 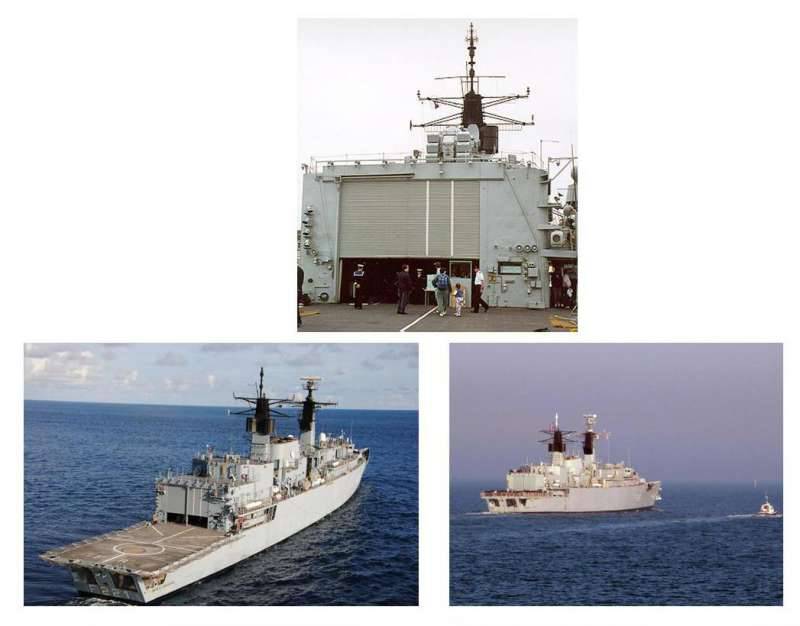 Pay attention to the roleta helicopter hangars. From above the frigate London, from below - Ferdinand and Maria

19 August reincarnation “Ferdinand” passed sea trials, and 9 September 2004, the “king” was introduced into the Romanian Navy (Marina Militară Română) and was assigned the tail number F 221. Soon the frigate flotilla was created, which included the former flagship frigate Mereshesht (see previous articles), King Ferdinand and Queen Mary. Since then, King Ferdinand (F-221) is the flagship of the Romanian Navy. 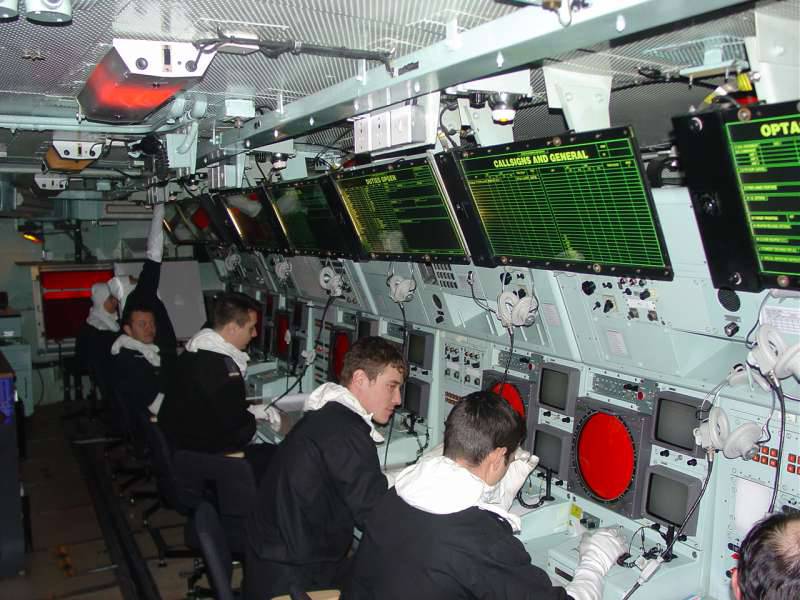 And then in the Romanian press there appeared articles in which they wrote that “Ferdinand” is good, but his appearance is not very belligerent, and the general meaning of the articles was reduced to quoting a boy from the fairy tale of the writer Hans Christian Andersen: “And the king is naked!” the scandal, which, of course, managed to hush up, as it was implicated BAE Systems plc, the largest defense company in the UK.

I will say briefly about the second ship. The frigate HMS London (F95) was also upgraded to Portsmouth, and 1 in August 2004 HMS was renamed “Regina Maria” (after Ferdinand’s wife) also inheriting the name of the Romanian destroyer of the Second World War. Queen Mary was introduced into the Romanian Navy and was assigned the F-222 tail number. This ship was able to collect quite a bit of information and photographs, as if “Maria” is always in the shadow of her crowned husband. Therefore, I compensate for this gap with several photographs and historical background of the queen herself. 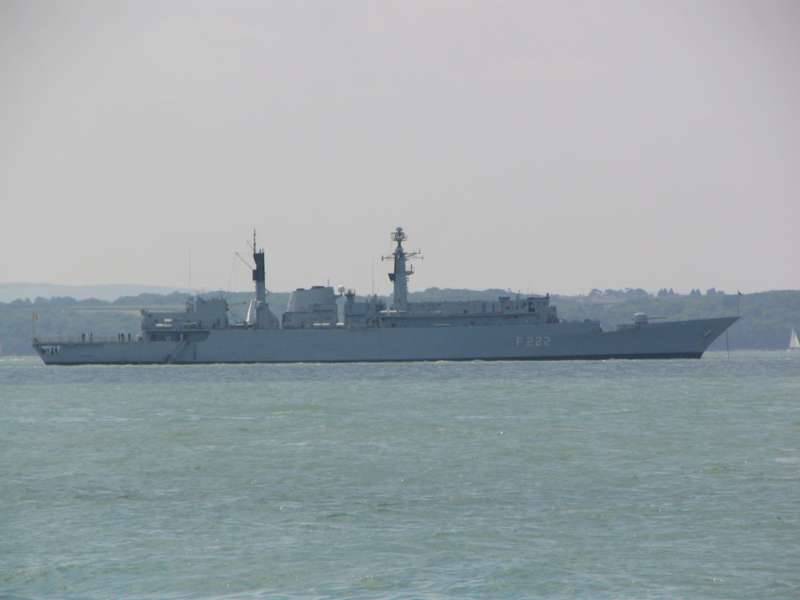 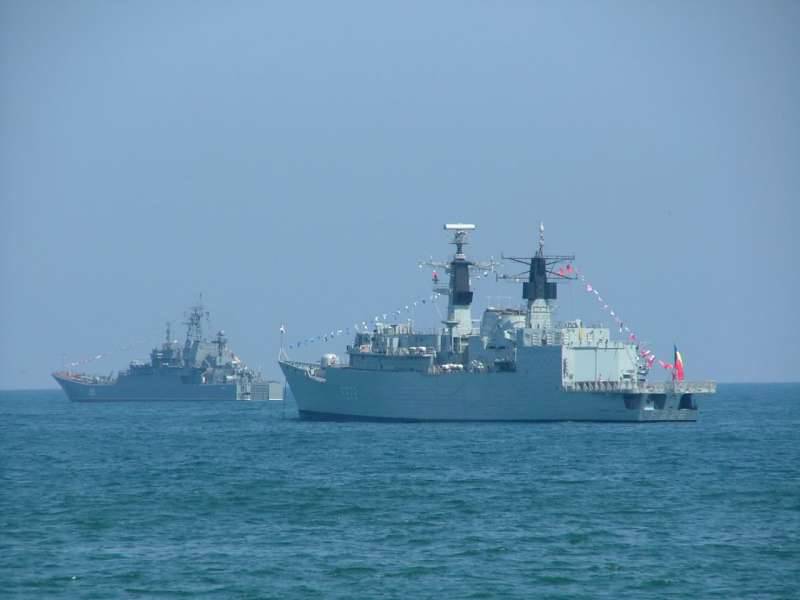 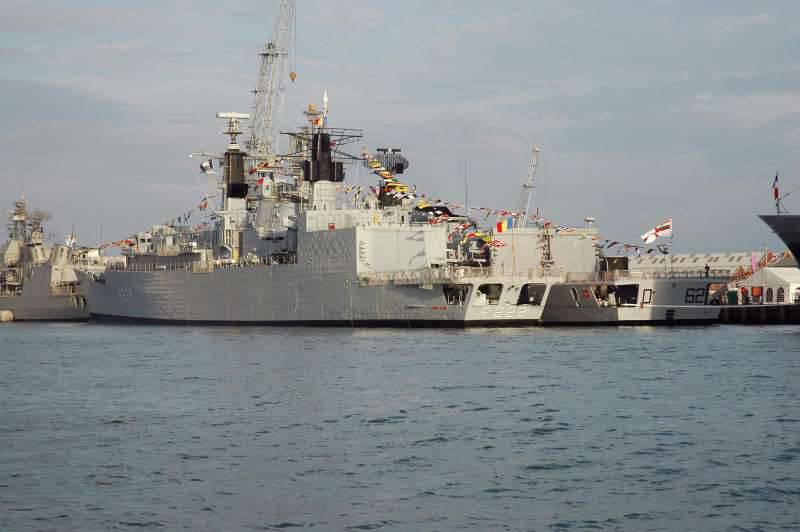 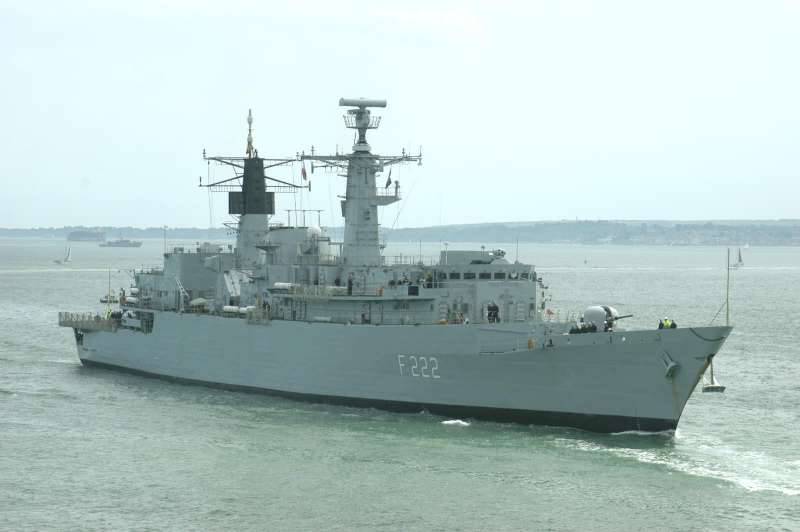 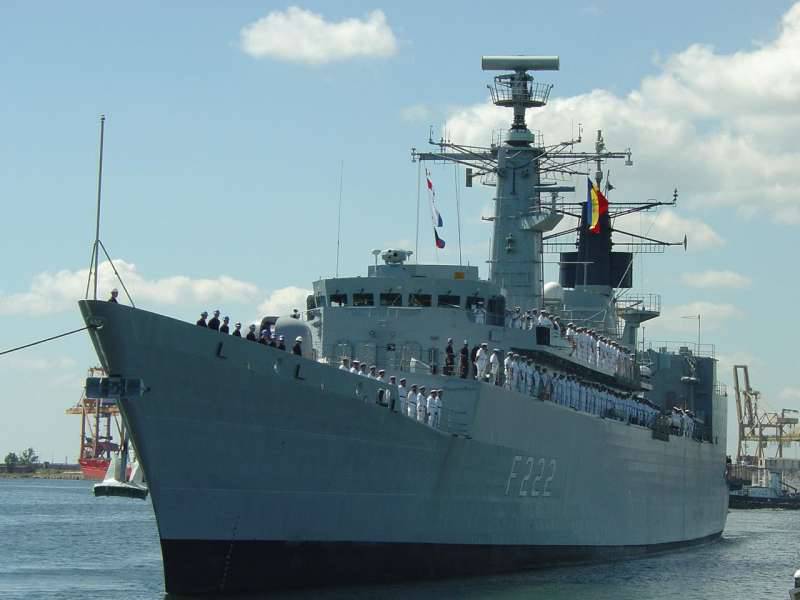 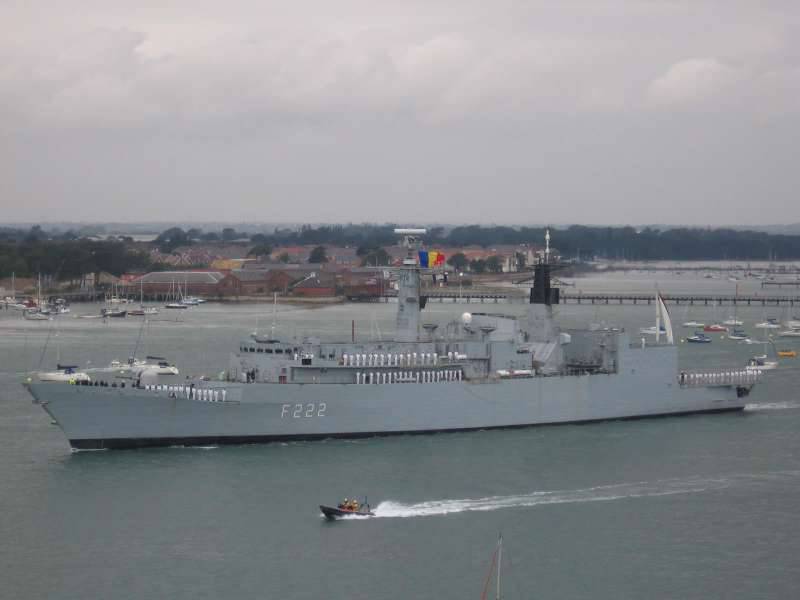 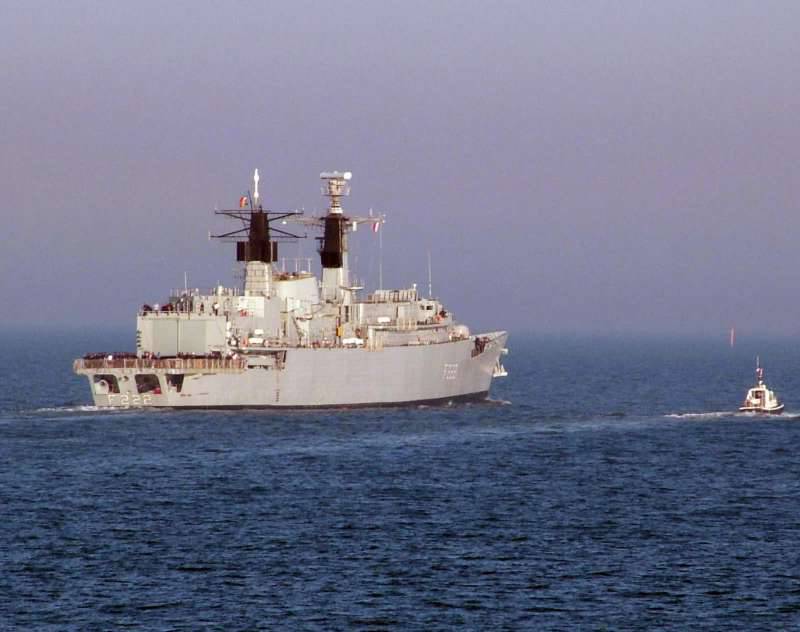 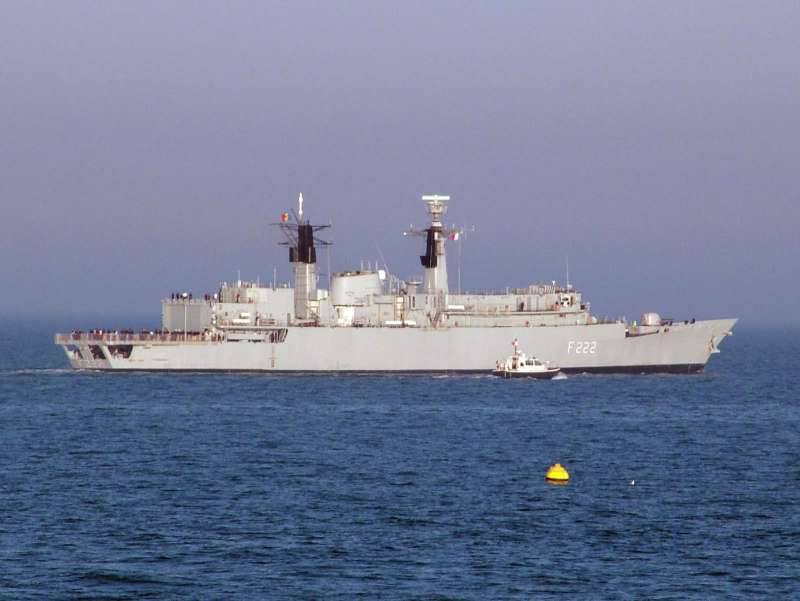 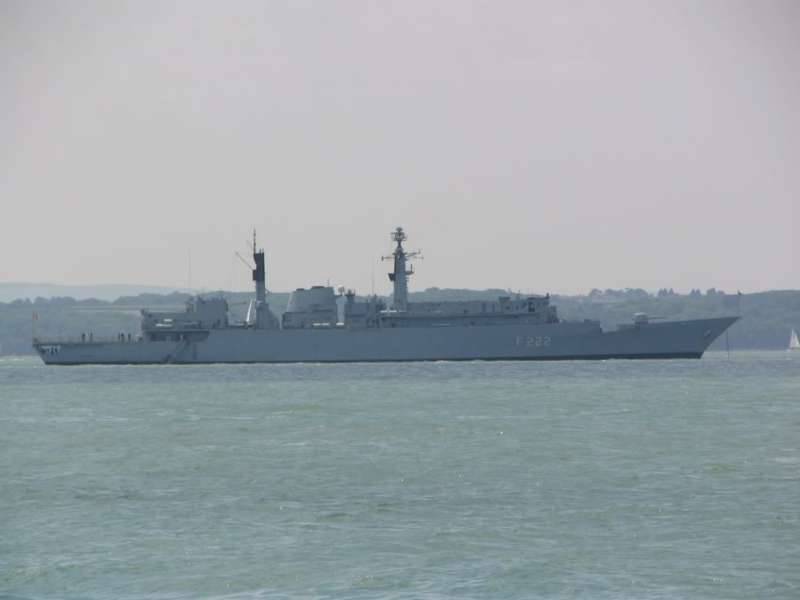 During WWI, Maria was a nurse, and to provide financial assistance to the organization of the Red Cross, wrote the book “My Country”. She also took an active part in the politics and plans of the war. In 1919, Queen Mary represented Romania at the signing of the Versailles Peace Treaty, which returned to Romania territories seized during the war. After the victory at Marasesht, the royal couple went to the front and they personally awarded the soldiers who distinguished themselves in battle. Despite the fact that the marriage of Maria and Ferdinand can not be called successful (both amassed the children’s side), they left only good memories in the memory of Romanian citizens.

In honor of this crowned couple have already called the ships. After World War I, Romania ordered Pattison at the Italian shipyard that there were two destroyer leaders in Naples. The prototype for their creation was the British leaders of the destroyers of the type of “Shakespeare”. The ships were named after their monarchs: “Reggele Ferdinand” (the ace of hearts of the Romanian royal fleet), and “Regina Maria” (respectively, the peak ace). By the way, these ships were captured on 29 on August 1944 of the year in Constance by Soviet troops along with other Romanian ships, including the destroyers Merasht and Merashesht, the fate of which I already described on the pages of “VO”. 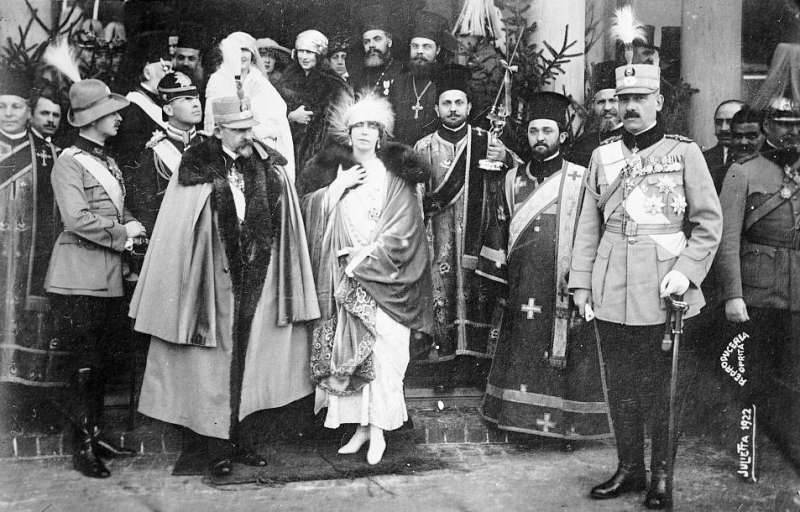 King Ferdinand and Queen Mary in 1922

Romanians started talking about the modernization of the former British frigates already at the beginning of 2000, even at the stage of signing the contract. During the 2-3 years, they planned to develop and approve a modernization project, and in 2008-2009 they already had to purchase and install modern models of weapons, equipment and radar systems. Military analysts argued that the modernization of the former British frigates will cost Romania 100 million euros. The third ship of the flotilla, the frigate Merashesht, which was built in Romania under N. Ceausescu, was also to be re-equipped. But the project was not detailed on time, and no money was allocated from the budget.
Modernization was postponed repeatedly, and in the press and on the forums they discussed possible sets of “upgrades”, their advantages and disadvantages.

While the modernization was postponed, attempts were made to bring the frigates to at least the level of the Offshore Patrol Vessel (patrol boat). For this purpose, machine-guns were installed on them. 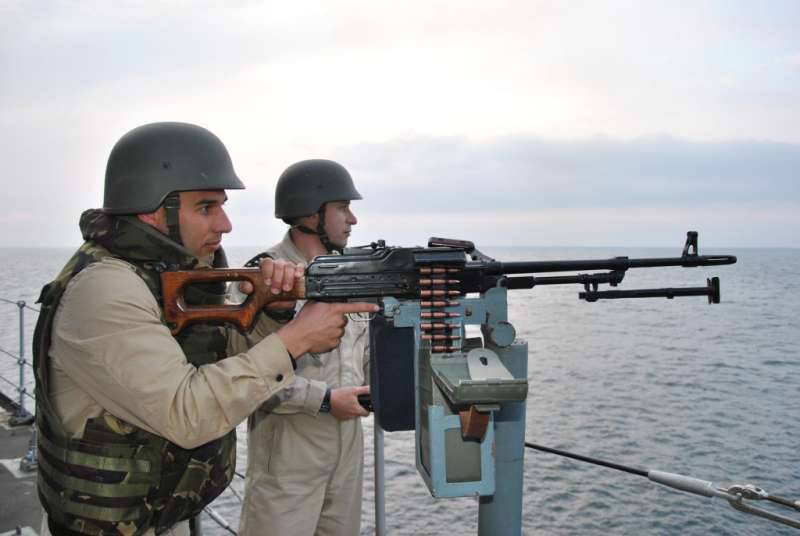 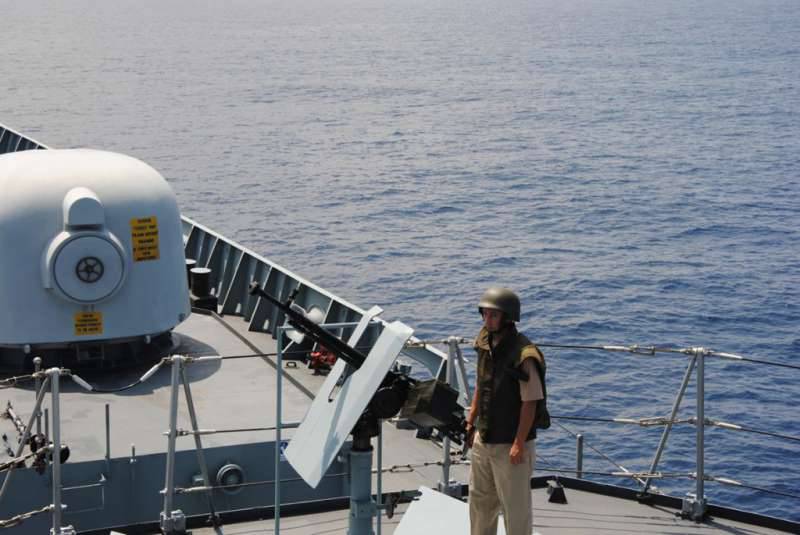 True, similar to Stallone in the movie "Rambo 4"? 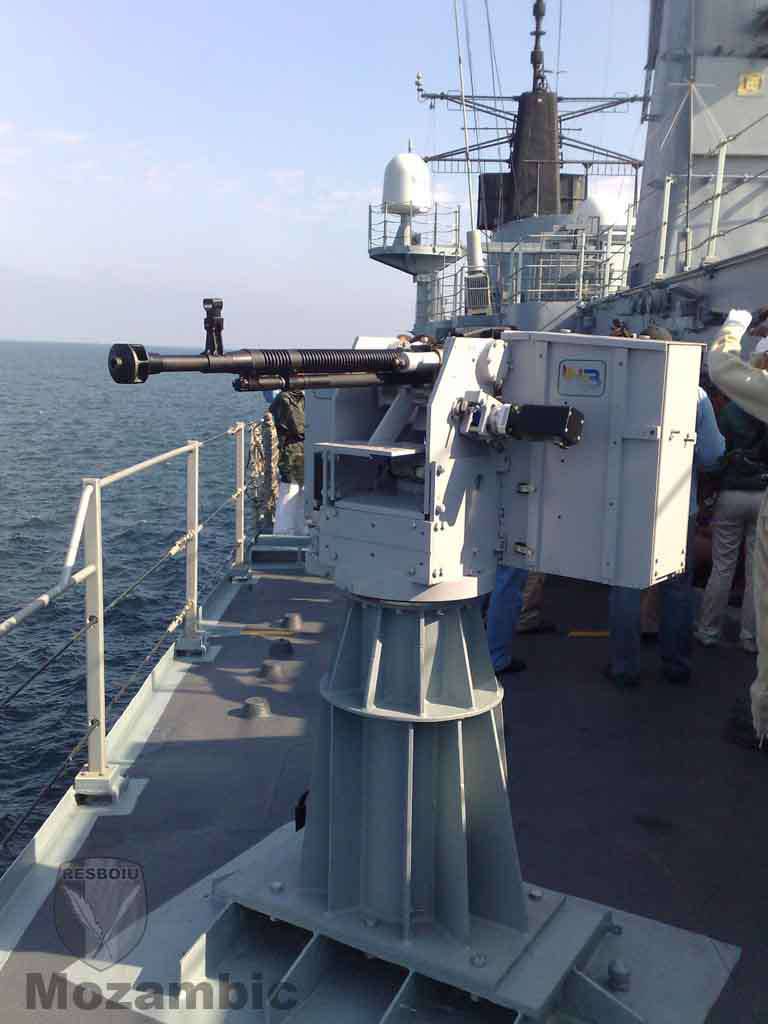 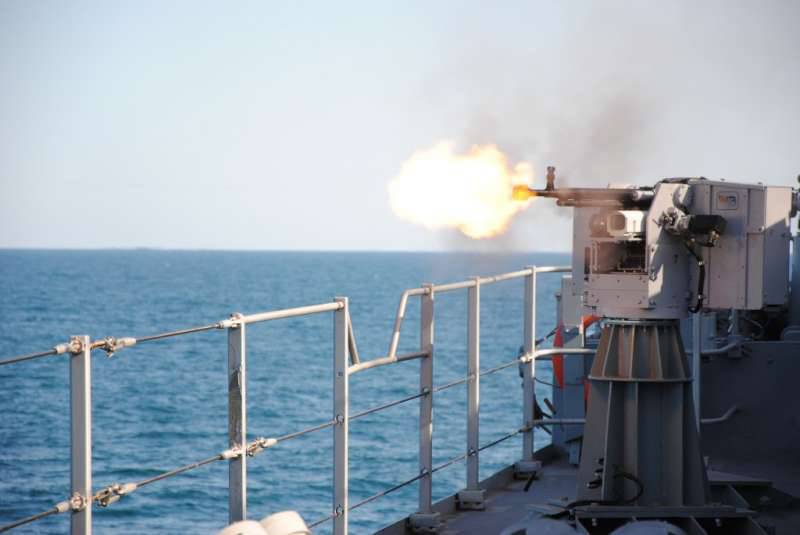 The same module, but already with optics and even shoots ... Most likely, an experimental module. I did not find confirmation that he was adopted 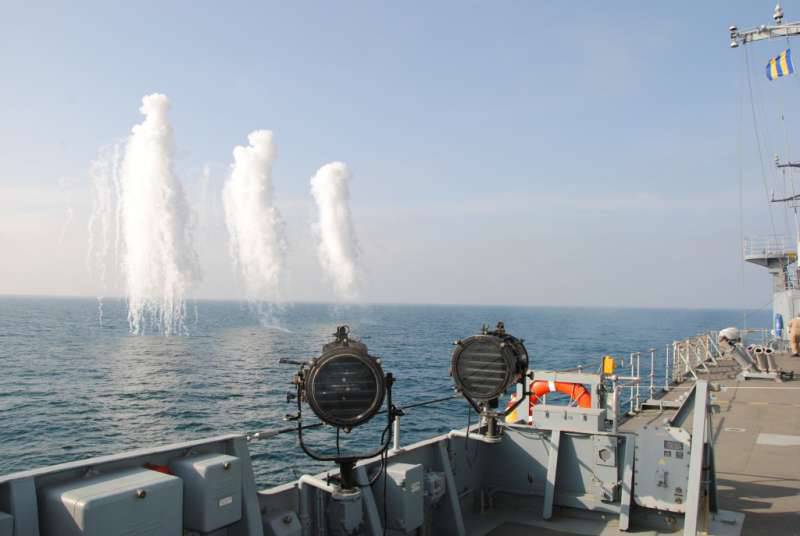 Once again, they started talking about the modernization of ships in 2013, when a series of meetings between representatives of 15 British and 30 Romanian defense companies took place in Romania on the territory of the British Embassy. The well-known BAE Systems, which has already earned at least twice from their sale, swung into the contract for the modernization of Type 22 frigates. MAN Diesel & Turbo UK, BCB International, Aish Technologies and others also had interests in Romania.
How did the negotiations in other areas end to this topic are not relevant, and the results of negotiations on equipping the frigates are obvious: Romania spent 16,5 million euros for the purchase of restored Sting Ray torpedoes for its frigates and deck helicopters 18. These torpedoes were decommissioned, upgraded and sold to those in need. That is, the Romanians again vparili second hand! When torpedo tubes appeared on the frigate, it was not possible to find out, but they were installed. At least, on '' Ferdinand ”. 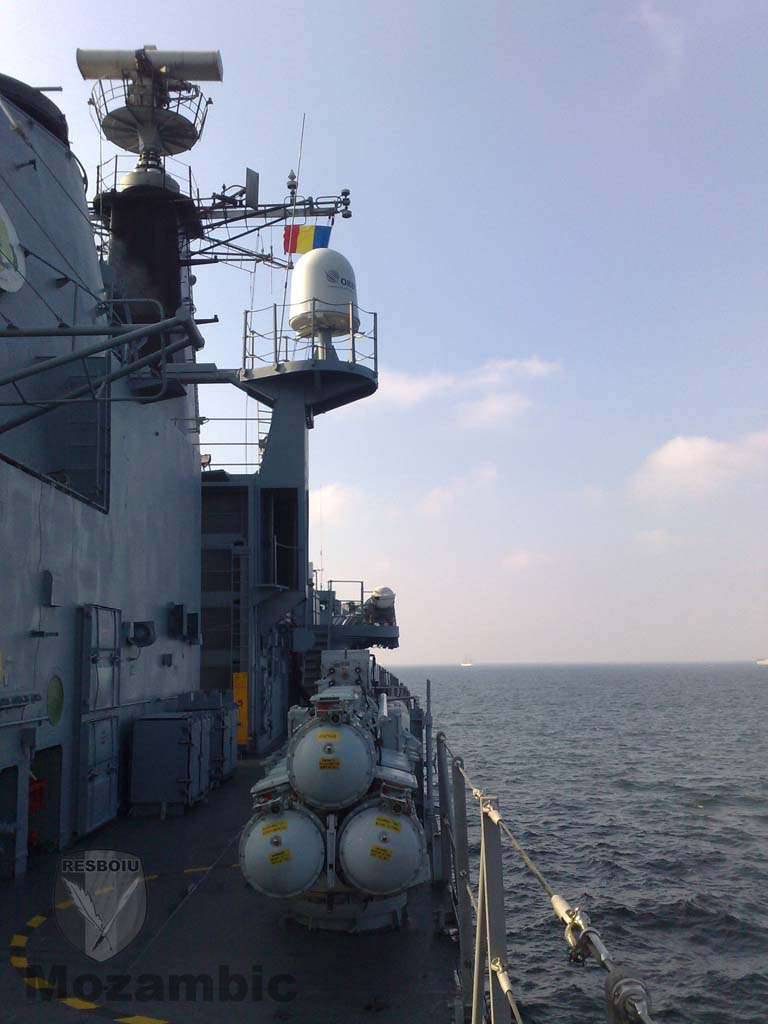 TA on the frigate “Regele Ferdinand”. Most likely, also used

As on the frigate Mareshesht, the air group of each of the frigates “Regele Ferdinand” and “Regina Maria” purchased from the UK consists of one IAR 330 Puma Naval frigate. They are produced by the Romanian aircraft manufacturing company “Industria Aeronautică Română” (IAR) under the license of the now defunct Aerospatiale-France. 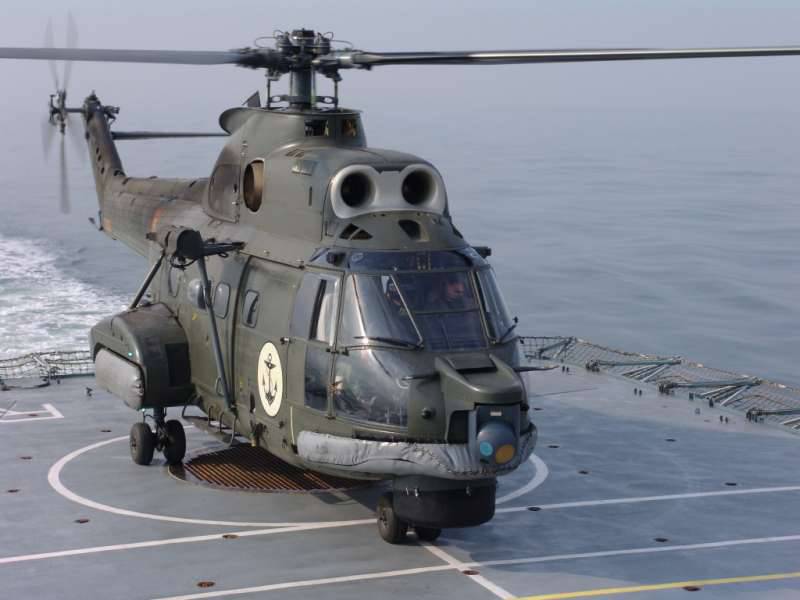 Helicopter Puma Nabal on the deck of a Romanian frigate

The author thanks Bongo for the advice.