March 2 2016
6
This is a continuation of an article about the Romanian frigates of the 21 of the 20th century. The first part is HERE. 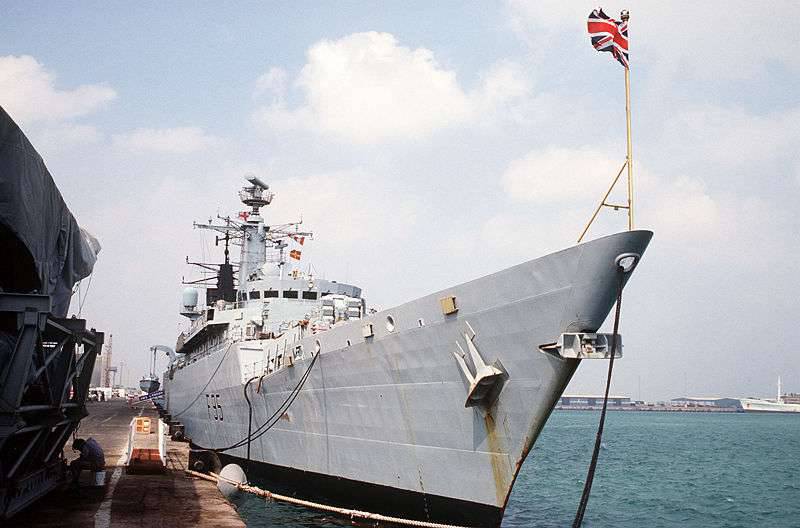 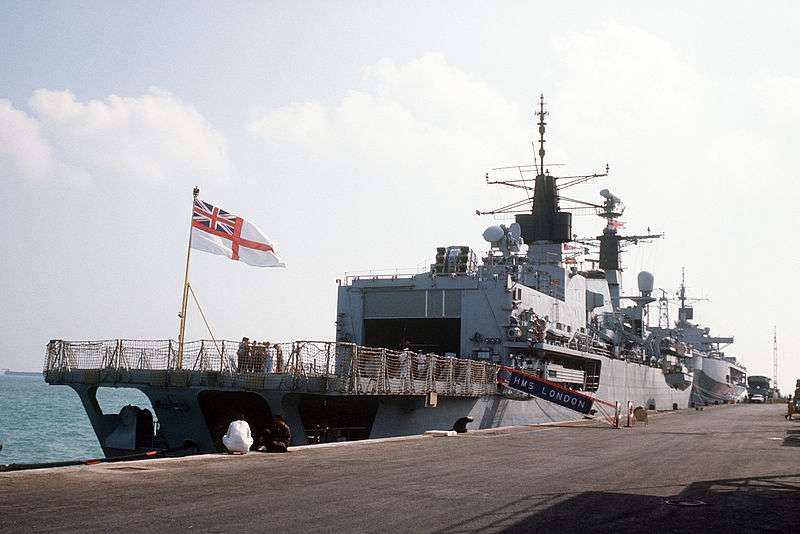 To obtain the optimal efficiency coefficient and more rational use of fuel, ship-mounted gas turbine power plants were installed on 22 frigates, consisting of 4 turbines arranged according to the COGOG scheme (COmbined Gas turbine Or Gas turbine). In the COGOG scheme, two turbines of different power are used for each propeller shaft: either less powerful for the main stroke or more powerful for the full stroke.

The idea to combine the work of two turbines arose due to the low efficiency of gas turbines when operating at partial load. That is, a low-power turbine that operates at full capacity is more efficient than a twice as powerful turbine that operates in the 50% power mode. In the COGOG scheme, a gearbox is provided that shifts the transmission of torque from one of two turbines of different power to the same shaft. This eliminated the need to use more complex and potentially more unreliable transmission mechanisms. 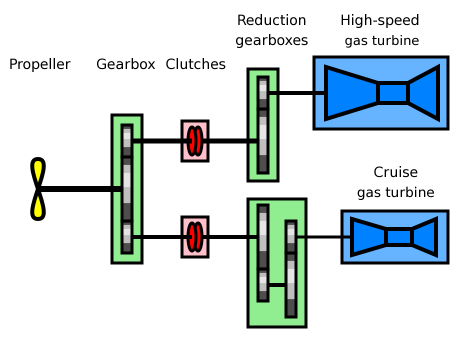 Combined EI according to COGOG scheme

Unlike the ships of the first series (a subclass of “Broadsword”), on frigates of the second series (a subclass of “Boxer”) the turbines Rolls-Royce Spey SM1A and Rolls-Royce Tyne RM3C were replaced by others. For full speed, the Boxer subclass frigates launched 2 turbines Rolls-Royce Olympus TM3B turbines (54,000 shp * / 40 MW each), and an economical ship course on the march ensured the operation of two Rolls-Royce Tyne RM1C turbines (9,700 shp / 7,2C) . Despite the fact that different turbines were installed on different series, the speed of movement of ships did not change. The maximum speed of all 22 frigates was equal to 30 nodes, and the economical (cruising) type was 18 nodes.

The electrical installation of the ships consisted of 4-x diesel generators with a capacity of 1 MW each (3 phase, 450 volts 60 hertz).

* shp (Shaft horsepower) - engine power in hp on the shaft.

Help.
For the first time the installation of such a scheme was tested on a 14 HMS Exmouth type frigate (F84). The COGOG system is also used on Soviet cruisers of the “Glory” type of the 1164 project.

As already mentioned, the main task of the 22 type frigates was anti-submarine defense, therefore the main weapons was anti-submarine weapons, which consisted of torpedo tubes, deck wing aviation and GAS with a towed antenna array. But if necessary, the possibility of their use as multipurpose ships (general purpose) was provided, and therefore the composition of the armament of frigates of type 22 was not limited to this.

Unlike the ships of the first series (a subclass of “Broadsword”), on the frigates of the second series (subclass of “Boxer”), the CAAIS combat information management system (BIUS) was replaced with a more advanced CACS-1 from the same manufacturer. To defeat large surface targets, they were equipped with rocket armament, which consisted of 4x PU for cruise anti-ship missiles Exocet MM38. For self-defense against airplanes and low-flying anti-ship missiles, they had onboard a missile armament in the form of 2x 6-container units of an air defense missile system of short-range Syvulf (GWS-25 Sea Wolf). As a means of air defense, they also equipped cannon armament: the 2х automatic 20-mm anti-aircraft guns Oerlikon and 2х twinned 30-mm automatic ship installations Oerlikon.
Torpedo armament consisted of two three-tube 324-mm TA Plessey STWS Mk 2. The machine gun armament of the frigates consisted of 4x 7,62-mm machine guns L7A2 GPMG (licensed FN MAG).

Below is a photo of the weapons and some equipment of the frigate HMS London, taken during its stay on the basis of the Canadian Forces Halifax. 29 May 1997, Photographer Sandy McClearn. 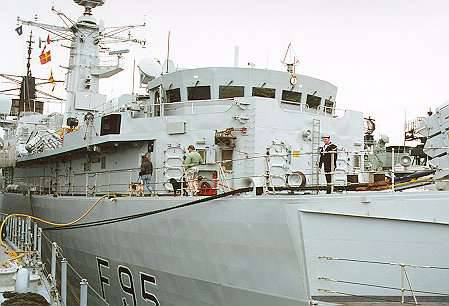 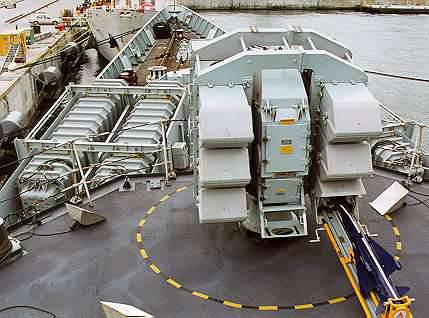 In the foreground are 6-container launchers for Sea Wolf air defense systems,
the deck below shows the PU for the Exocet RCC 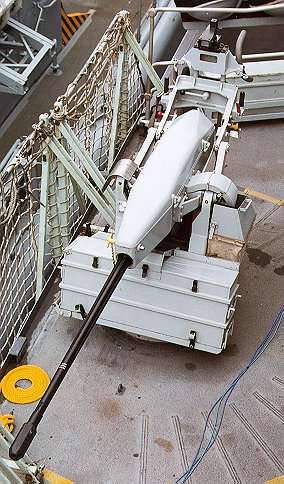 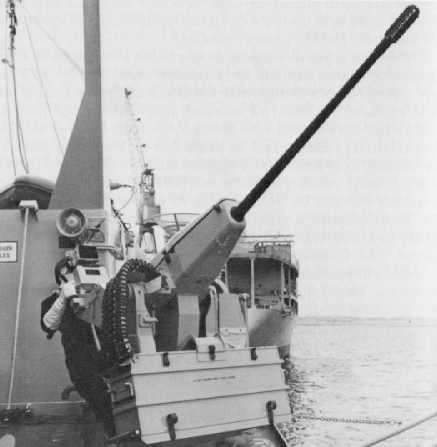 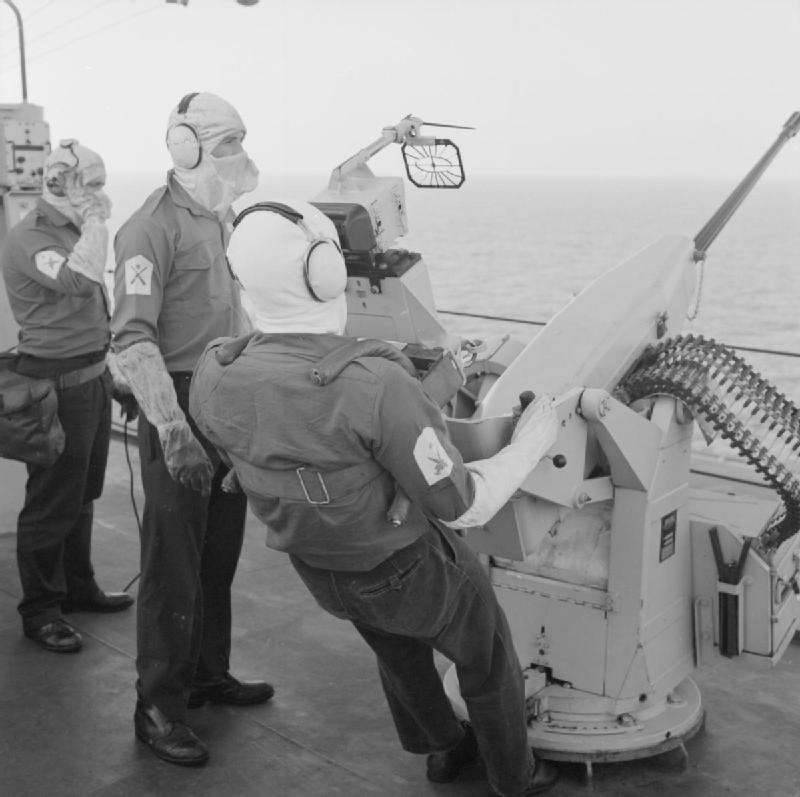 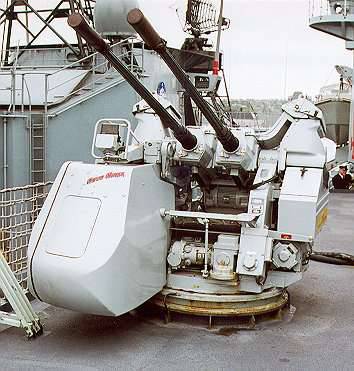 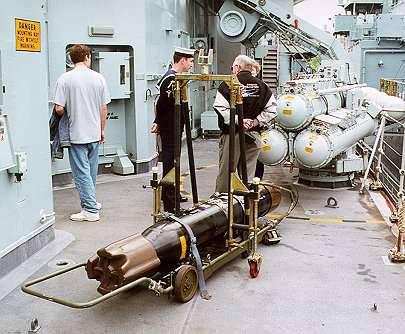 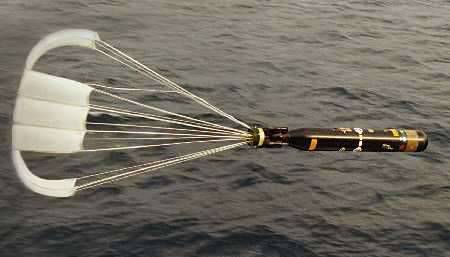 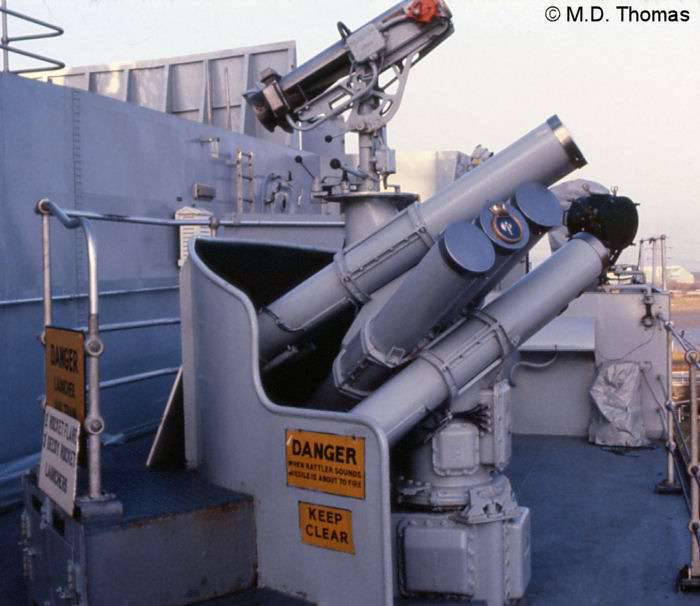 8-Barrel 130-mm Corvus IR Interference PU from BAE Systems.
This photo from the board of the frigate from the 1-series HMS Battleaxe (F89) 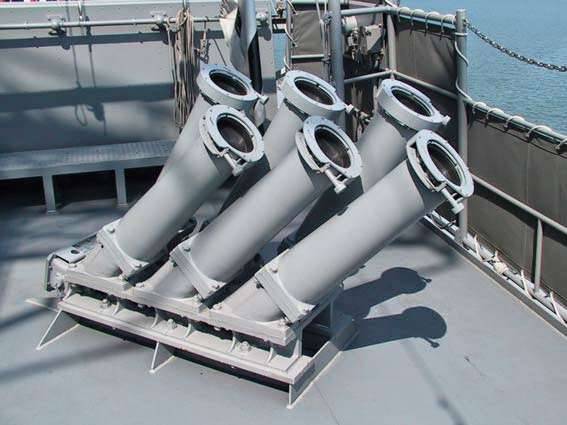 130-mm PU dipole reflectors Mk 36 SRBOC from BAE Systems. This is a photo from the board of a small Kilic I / II type patrol boat for the Turkish Navy.

To ensure navigation, type 22 frigates were equipped with a Kelvin & Hughes type 1006 navigation radar. For observation, detection and identification of surface and surface targets, the Marconi type 967 & 968 universal radar was installed. The fire control was conducted by the Ferranti CAAIS combat information and control system and 2x GEC Marconi type 910/911 target tracking radars (for Sea Wolf air defense systems). As a means of sound detection of underwater objects on the frigates, a Type 2016 hydroacoustic station and a GAS with a towed GEC Marconi type 2031 antenna were installed, and the Abbey Hill UAA-1 CPTP was used for electronic reconnaissance. 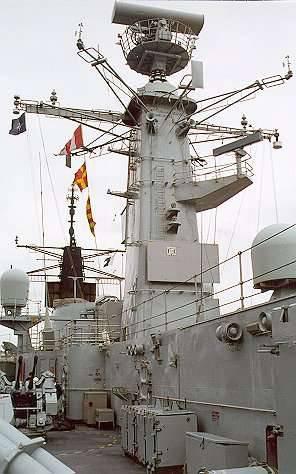 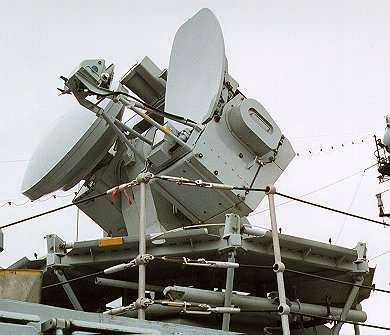 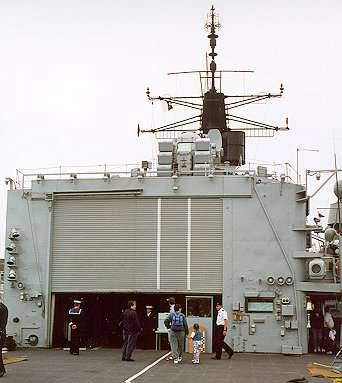 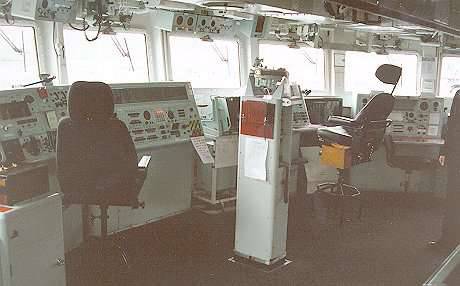 Regarding the cost of frigates of this type, then a member of the British parliament, chairman of the Conservative Party’s trade and industry committee of the Conservative Party will answer for me: “According to our forecasts, in the 2010-2011 fiscal year, the operating costs of the Cumberland frigate will cost the defense budget 16 million pounds. Now we are searching for the best way to dispose of it ”.

We are talking about the frigate Type 22 HMS Cumberland (F85). This is the 3 series ship (subclass “Cornwall”). In 2011, all 4 of the remaining Type 22 frigate were withdrawn from the UK Navy. The overall savings for the military budget were estimated at 240 million pounds. Unfortunately, buyers from these countries of the 3 world could not be found for these ships, so instead of “the best way to dispose of them,” they were scrapped. And then saved even more. 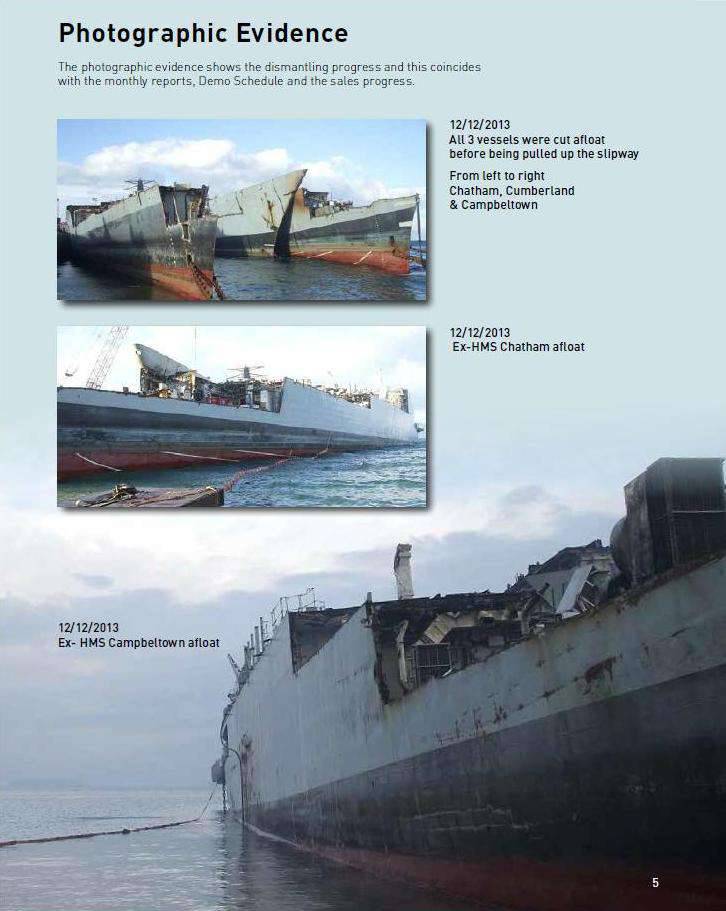 Photo from the report of the Ministry of Defense of the United Kingdom on the disposal of frigates Type 22. In the top photo (left to right) Campbeltown (F86) Chatham (F87) Cumberland (F85) 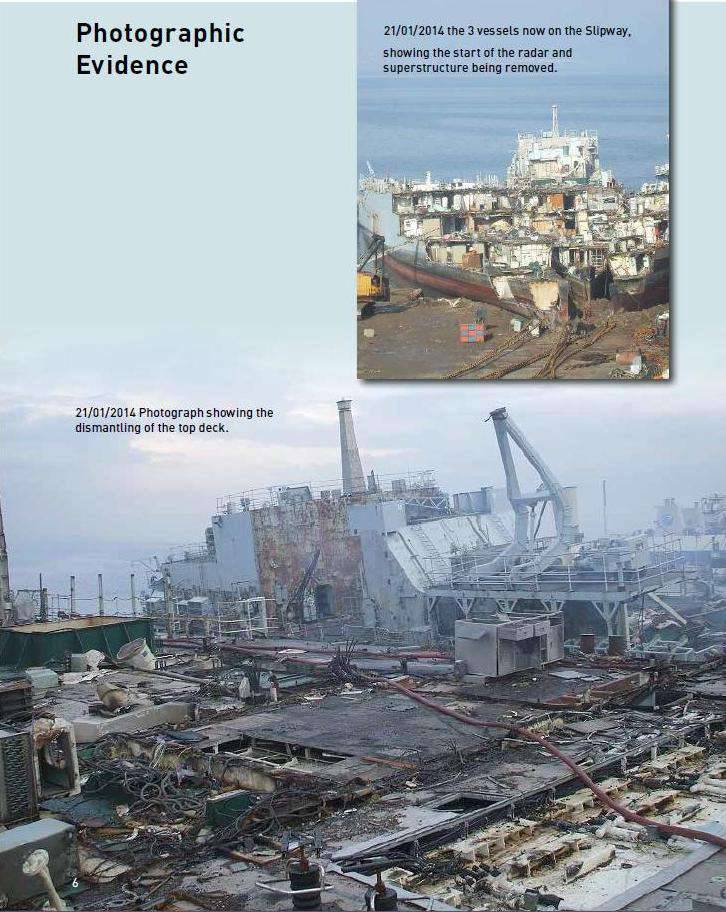 As I wrote earlier, the Turkish company LEYAL Ship Recycling Ltd. deals with the disposal of the ships of Her Majesty.

Onboard 22 type frigates were supposed to accommodate up to two multi-purpose carrier-mounted helicopters Lynx HAS Mk.2 (later Mk.3, then Mk.8: maritime version of Super Lynx) developed by British company Westland together with French Aerospatiale. In reality, the aircraft combat unit of each ship consisted of one helicopter, 2-x replaceable crews and 9 service personnel. 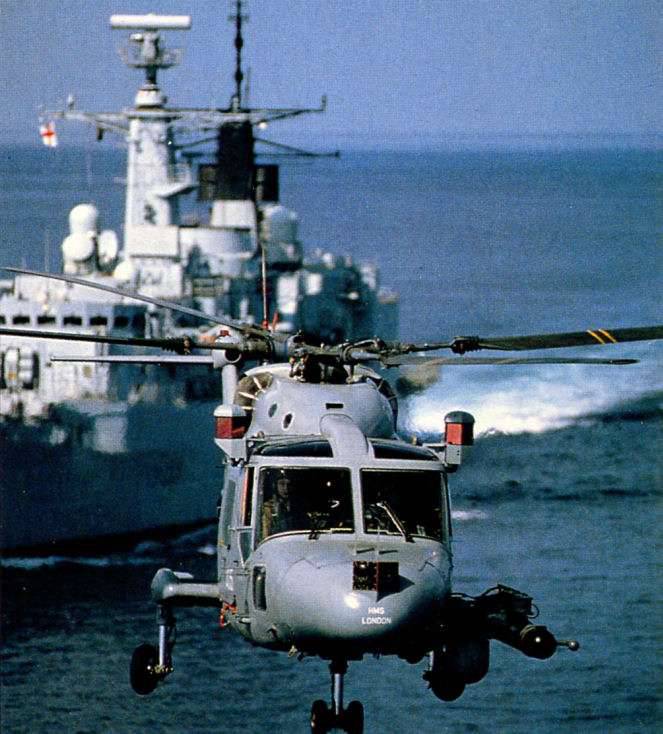 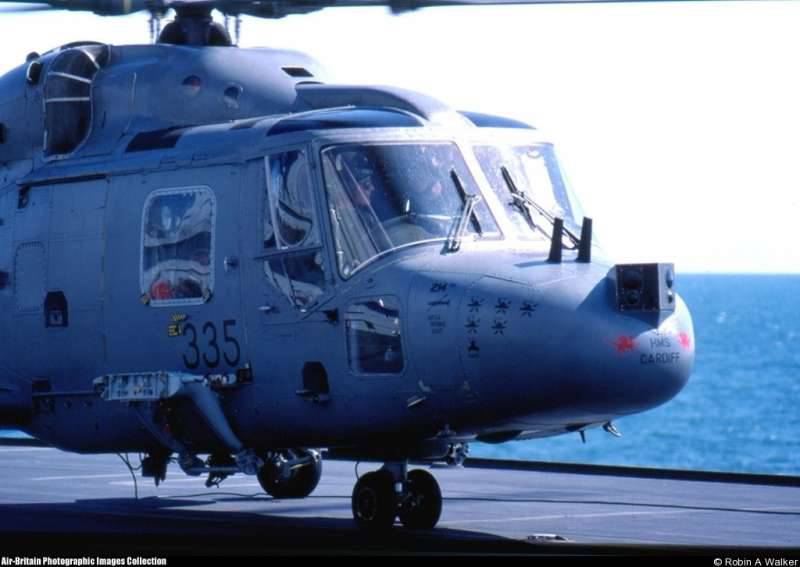 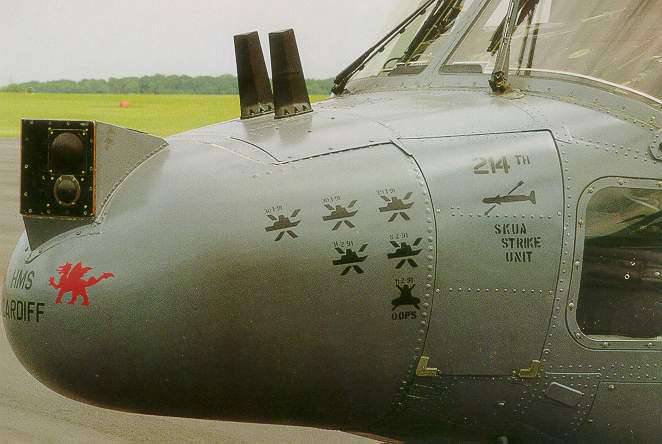 About Lynx helicopters written a lot, so I will be brief. The main armament of the helicopters was made up of short-range anti-ship missiles with a radar-guided Si Skue (Eng. Sea Skua - Sea Helper). The weapon was placed on the two external nodes of the suspension, and the maximum combat load was 4 RCC. 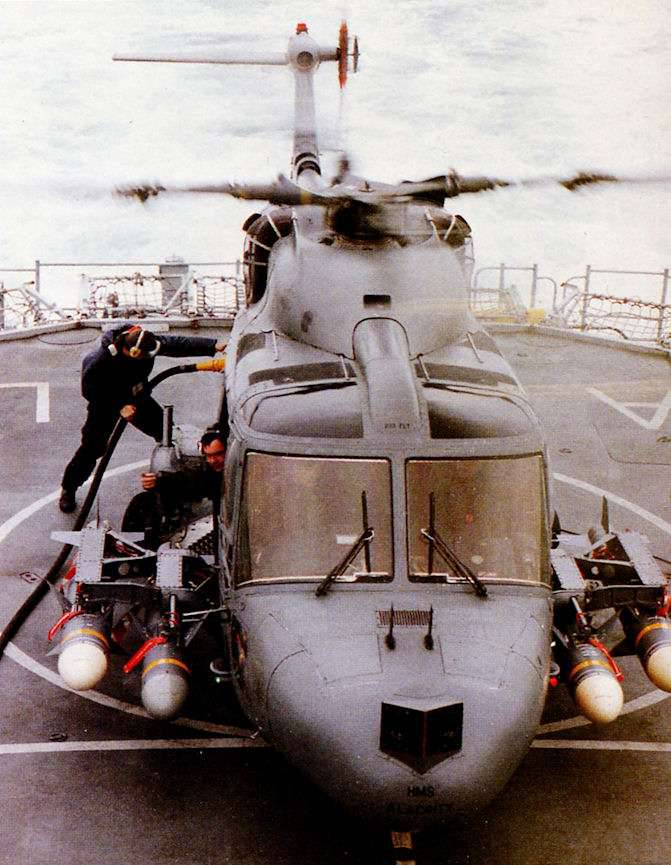 Lynx HAS Mk.3 with Sea Skua 4 PKR is being prepared for departure. Frigate type 21 Alacrity (F174) 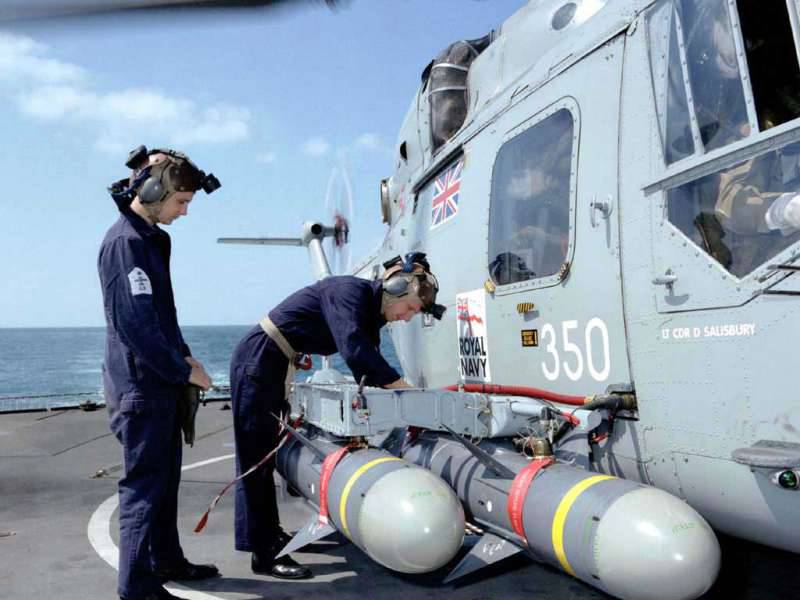 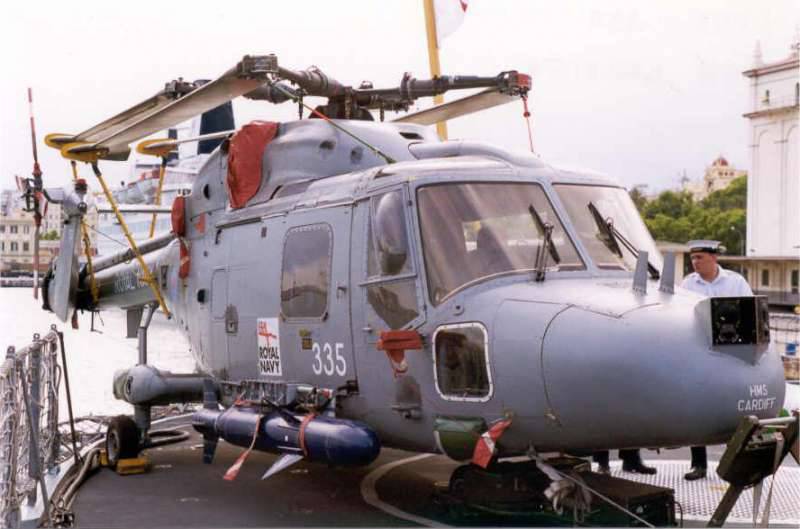 Lynx HAS Mk.3 of the 815 sea naval squadron with blades and tail boom in the stowed position. On its external nodes are suspended 2 PKR Sea Skua. The vehicle was assigned to an 42 HMS Cardiff URO destroyer (D108)

Instead of Sea Skua anti-ship missiles, Lynx helicopters could arm themselves with two Stingray light anti-submarine torpedoes. Stingray torpedoes could be replaced by other torpedoes, namely the Mk 44, Mk 46 or A244S. Also in the arsenal could include 7 marine marker or 2 depth charges Mk 11. 2x 7,62-mm machine gun L7A2 GPMG (licensed FN MAG) were used as machine gun weapons. 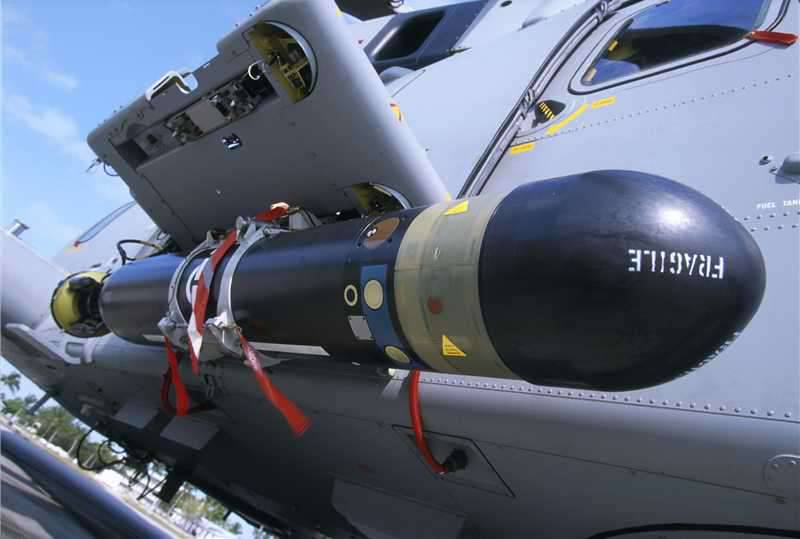 The author thanks Bongo for the advice.