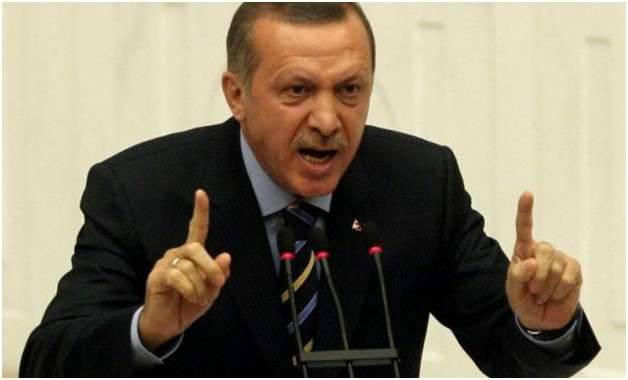 The name Tayyip Recep Erdogan has become almost a talk of the town. His name did not leave the leading lines of the events of the Middle East in recent years, beginning with the beginning of the civil war in Syria and to this day. In the name of "janissary in a tie," you can safely lead the list of people of the year. However, the rating topic is likely to be questionable.

An analysis of the latest developments of the political course of the President suggests that the Turkish establishment is often guided not by political foresight and common sense, is not the position of his country in the geopolitical field, and emotions. Feelings and sensations.

Let us recall the most important events in the Middle East in recent years and consider the position of the Turkish neo-osman to these events.

The war in Syria: the rejection of the Assad regime was originally due to several reasons. First, T. Erdogan, relying on the overthrow of the Assad regime, wanted to get absolute support from the United States (which he did not receive in the end, even in the Kurdish question). Secondly, there is one party - the Kurdistan Workers Party, which heads the list of the most dangerous for the integrity of the Turkish state and ... which enjoyed the great support of the Assad family (son and father of Hafez Assad). Thirdly, the Asad family is Alawites, and Erdogan is famous for his ardent Islamist ambitions. Syria with Assad is a situation in which Erdogan can forever say goodbye to his imperial ambitions. But Syria without Assad is the last chance for the Turkish leader to reanimate his reputation and claims for regional leadership. However, the main basis of non-acceptance by Erdogan Assad has no logic - the desire to restore the former empire and expand the boundaries of the territory. It is a grievance based on sensations and irrational dreams of US support. Emotions, emotions and emotions once again made Erdogan stay with his nose.

Kurdish problem. In one of my articles (http://cont.ws/post/185562), I gave a lot of rational arguments in favor of the opinion "It is more pragmatic for Turkey to agree to give the Kurds autonomy." These arguments include the financial costs of the armed struggle against the Kurds, the loss of the status of a democratic state, the undermining of the tourism sector, the destruction of energy and economic relations due to explosions of gas pipelines, the lives of thousands of people, finally, etc. A whole set of disadvantages for Erdogan. However, the President continues his trill. And this trill is devoid of pragmatism. The Turkish leader (the leader of a state that was once part of the Great Ottoman Empire) cannot give the largest ethnic group a part of the historical ethnic territories. And this unwillingness is also emotional and devoid of common sense.

Turkey - Russia. On November 24, a truly significant event occurred in relations between the two countries - the Russian SU-24 shot down by the Turkish side. The true reasons for such a reckless act on the part of the Turkish authorities are not known until now and Turkey is also paying the price so far (including sanctions and the development of Russian-Kurdish relations). Despite the fact that the Turkish leader is turning the arrows on NATO, it is absolutely clear that such orders can be issued only by a representative of the highest echelon of power, that is, the President of the country, that is, Tayyip Recep Erdogan. This is another illogical event led to the fact that Erdogan received two more enemies - in the face of Russia and NATO, in addition to the already existing regional neighbors of opponents.

Turkey - Israel. The event with the Russian plane is very similar to 2010, when Israeli special forces attacked the Turkish flotilla in the Gaza Strip. On emotions, Erdogan ordered the Israeli ambassador to be sent immediately from Ankara, in one fell swoop ordered to stop all types of economic cooperation and air traffic.

Another trait Erdogan has is ambition, which is often compared with the character of a Russian leader. Here is what the expert analysis center of Stratfor writes: “While Europe and other parts of the world are ruled by nondescript mediocrity, Recep Tayyip Erdogan has been boiling with ambition for ten years now. Perhaps there is only one more leader of a large country who is creating such a dynamic force field around him: this is Russian Vladimir Putin, with whom the West also feels extremely uncomfortable. ” And what were the ambitions of Erdogan?

become EU member
expand presidential powers
to create a neo-Ottoman Empire
become a leader in the Middle East and the transit center.

Unfortunately, none of his dreams were destined to come true. And it hinders everything - the emotional temper, which implies short-sightedness, dependence on the United States, and also the fact that many decisions are made without common sense. Parting words to Erdogan: “Do not justify your actions with either politics or religion ... Nothing but common sense.”

Ctrl Enter
Noticed oshЫbku Highlight text and press. Ctrl + Enter
We are
Erdogan as a favorite politician sofa strategistsThe best main battle tanks of the world 2012 of the year
41 comment
Information
Dear reader, to leave comments on the publication, you must to register.