February 29 2016
158
Last week, there was a meeting between the leaders of Russia and Belarus, from which even very large and respected media outlets decided to single out the only “worthy attention” event: Alexander Lukashenko called Vladimir Putin “Dmitry Anatolyevich”. As for the rest, something similar to ignoring information, as if, apart from the Belarusian president’s reservation, the Minsk meeting of the two leaders and the meeting of the Supreme State Council of the Union State did not give much information. 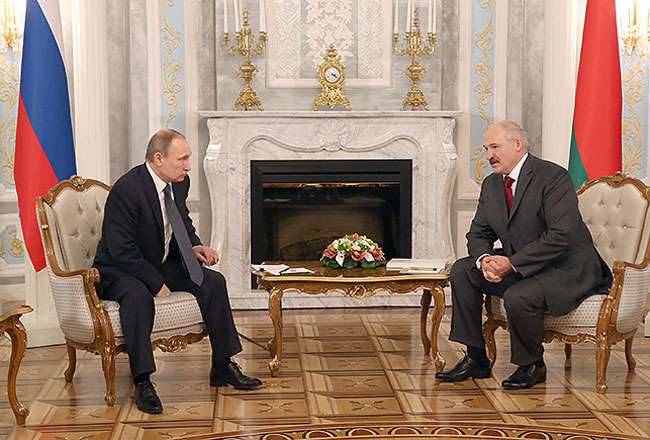 In fact, there are not a lot of info-discussions to discuss both the meeting between Vladimir Putin and Alexander Lukashenko, and the meeting of the Supreme Security Council of Russia and Belarus. Perhaps the main reason is that, despite the numerous critical arrows fired towards the Union State of the Russian Federation and the Republic of Belarus, this same Union State demonstrates the possibility of pragmatic and good-neighborly integration. Moreover, the very fact of the existence of the NG of Russia and Belarus shows that today there are no global contradictions between Moscow and Minsk that would repel states and peoples from each other. And if this is so, then the FG of the Russian Federation and the Republic of Belarus is a wonderful example for all those who declare their readiness to go along the path of integration with each other on the basis of mutual respect of state (national) interests. The integration path is preserved - and this is at the moment when waves of chaos and discord literally roll through the world, often provoked by well-known forces. This was noted by both presidents, placing the existing Union State as a valid integration example.

A small fragment of the speech of Alexander Lukashenko at a meeting of the Supreme State Council, in which the Belarusian president spoke about the adoption of the budget of the Union State in difficult economic conditions (size - 6 billion Russian rubles) (material BelTA):

During the meeting of the Supreme State Council of the SG of the Russian Federation and the Republic of Belarus, the negative trends and challenges that Russia and Belarus are facing were noted. The economic situation leads to the fact that for the third year in a row the fall in mutual trade has been showing itself. If we compare the 2014 and 2015 years on this indicator, then the trade turnover between Russia and Belarus fell by almost 26%. This, as the presidents noted, indicates that the mechanisms of trade and economic cooperation in crisis moments are not completely refined. According to Lukashenko, one of the recipes for the growth of the general economy and mutual trade is to eliminate trade barriers.

From the statement of the Belarusian leader:
(...) removing barriers, ensuring the effective functioning of a single market for goods, services and capital, as well as mutual support are areas of our common interest.

However, in the removal of barriers today lies the main pitfall of the functioning of the economic system of the Union State. The fact is that the European Union, which in Russia has lost a huge trading field after the exchange of sanctions packages, is looking for any ways to bring its (primarily agricultural) products to the Russian market. If with Ukraine it is the most complete seam in this direction, since Kiev sits tightly on overseas TC, then Belarus is an option close to the ideal one. Obviously, this difficult question of removing all barriers between the Russian Federation and the Republic of Belarus against the background of economic anti-Russian measures imposed on the European Union was also discussed during the meeting of the Supreme State Council of the Union State. Indeed, on the one hand, the state should remain unionized in all respects, including, of course, the economic sector, and on the other hand, the opening of the “Belarusian gate” will result in the EU being able to take advantage of the close partnership of Minsk and Moscow to promote its products to giant russian market. There would, of course, attract a third party - Brussels - to discuss the possibility of turning mutual sanctions into cheap fiction to restore full-fledged trade in both directions, but the ball, as they say, on the side of EU officials, and the whole hitch in their independence ) and the ability to make decisions without pointing from overseas. So far, there is an opinion, Brussels is forced to take steps eastward, but, seeing how he is threatened with a finger from Washington, at any moment is able to play back and return the situation to zero level.

From the statement of Vladimir Putin (the material of the official President’s website):
It is important to formulate the work of economic departments, focus them on improving the business and investment climate, and to this end intensify the work of the working group on macroeconomic coordination, continue the practice of holding joint meetings of the collegia of ministries of economy of the two countries.

It is also necessary to increase the multifaceted sectoral cooperation, to pursue a more coherent economic policy. When we were already in a narrow composition, when we discussed, we paid attention to some points that arise in practical work and which, of course, we can completely avoid.

We also agreed to continue harmonizing the regulatory framework in the industry, the monetary and financial sectors, and the services sector. A key factor in the growth of the economy of the Union State should be the development of industrial cooperation, primarily in the field of high technologies. It is necessary to increase the share of high-tech products, to replace foreign components, especially, of course, primarily in sensitive industries, on which the security of our countries directly depends.

By the way, we already have quite a good start in this area. In December 2015 of the year, a joint company of the Stankoengineering Union was created, and a joint production of microelectronics was launched as part of special programs.

Progress continues in the formation of a unified navigation space of Russia and Belarus based on the GLONASS system. Projects are being implemented in the field of remote sensing of the earth.

The strategic nature of the Russian-Belarusian cooperation in the energy sector. The construction of the Belarusian nuclear power plant is in full swing. Of course, this is one of our flagship projects. Recall that the volume of Russian investment - 10 billions of dollars. The launch of the first power unit is scheduled for 2018 year, the second - for 2020 year. 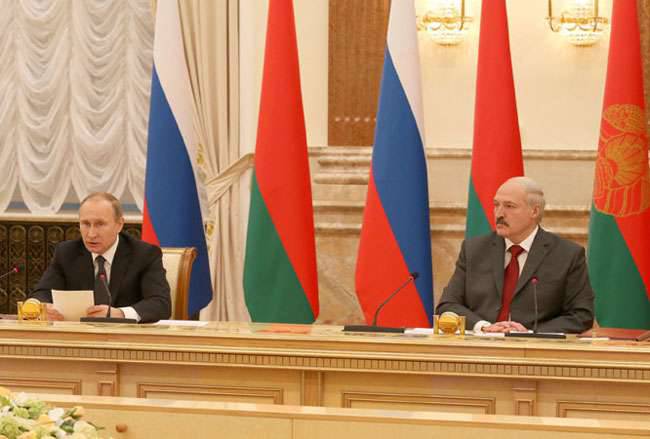 The issues of security of the Union State were also discussed. At that moment, when a permanent NATO center opens in neighboring Ukraine (including the management and communications segment), it is simply impermissible not to respond to the new approach of NATO infrastructure to the borders of Russia and Belarus. During the meeting of the Supreme State Council of the Union State, it was noted that through the line of law enforcement agencies, Moscow and Minsk developed a clear action plan for the joint regional grouping of troops.

According to Alexander Lukashenko, the Union State "keeps the powder dry", since military-political crises and the return of a number of countries "to bloc thinking" persist. Another thing is that the Belarusian president did not mention the following: is there a "number of countries" own their thinking, or, nevertheless, their entire thought process fits into the formulas that are descended by one “exceptional” thinker ...

After the appearance in the Western media of information that the US missile defense infrastructure will appear in Poland by 2018, and that Washington’s engineering efforts in this direction already take place, Russia and Belarus will, by definition, respond. And this answer will be simple: on the military maps, Poland will simply be identified as a new target. And all the wails of Warsaw that “Russia is approaching the borders of NATO”, and Moscow, and Minsk, as they say, are sideways. The protection of union-national interests is above all. And if the same Poland and other neighbors decided that in an aggressive bloc is the main European happiness, then this is their problem ...

Ctrl Enter
Noticed oshЫbku Highlight text and press. Ctrl + Enter
We are
Union of Russia and Belarus - to be. The Day of Unity of Russia and BelarusResults of the week. "So it is in Turkey ... It's warm there ..."
158 comments
Information
Dear reader, to leave comments on the publication, you must to register.