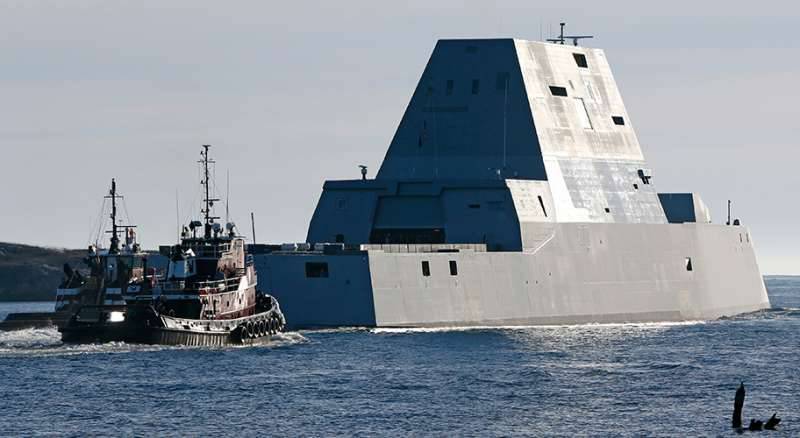 The first US destroyer of a new type with rocket armament on board, which gave the name to the entire class of ships, the Zamvolt, will soon enter service with the US Navy. This week began his trials at sea. The destroyer belongs to a fundamentally new generation of weapons created by the Americans.

The crew of the Zamvolt consists of almost one hundred and fifty seamen. Such a small team for such a huge ship is explained by maximum automation.

The destroyer Zamvolt was built at the Bath Iron Works shipyards. On combat duty, he must step in next year. This ship resembles a futuristic ship of the future, which has just come down from the big screen or the pages of a science fiction novel. In principle, this is the case: the ship from James Bond's 1997 movie “Tomorrow Never Dies Never” looked almost exactly the same, built by the main villain Carver, who tried to seize power over the world with the help of the media and marine equipment. The real destroyer is so similar to its cine prototype, since it was implied that the latter was built using stealth technology.

At the beginning of this week, according to the AR agency, the destroyer escorted by tugboats left Fort Popem and sailed into the Atlantic Ocean, where he will be tested. In the US Navy, Zamvolt and two more ships of this class, which now stand in shipyards, are looking forward to. The destroyer Zamvolt is a ship of the XXI century. He has a completely new engine with full electric propulsion. Electricity is produced on board. 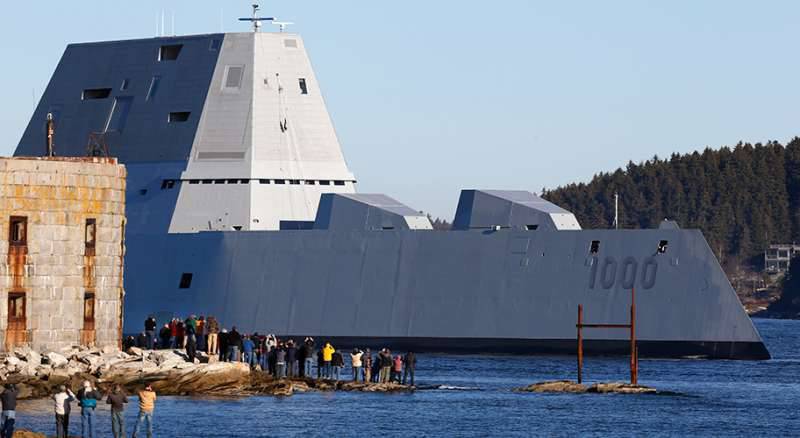 The Zamvol is armed with X-NUMX Mk-20 rocket launchers, two long-range 57-mm guns and 155-mm anti-aircraft guns. To protect against radar, the destroyer hull and superstructure are “dressed” in an 30-centimeter “shirt” made of radio-absorbing materials. She's what makes him a movie hero. The price for Zamvolta is to match all the weapons and appearance. It costs at least 3 billion dollars.

At sea and on land

The Pentagon intends to frighten Russia and China, of course, not only with Zamvolt. In the American media, the day with the fire does not find messages about this, but in Syria and Iraq, the US Department of Defense is experiencing new exotic weapons systems.

This was recently told to journalists by US Deputy Secretary of Defense Robert Wark and Vice Chairman of the Joint Chiefs of Staff, General Paul Selva, writes the Washington Post.

It seems that the Pentagon decided to fully take advantage of America in high technology. It is on them that a bet is made in the correspondence arms race with Russia and China. New weapons systems resemble weapondiscussed in the Star Wars Reagan program. With only an amendment to the three decades that have passed since then, and numerous scientific advances and discoveries.

The Pentagon reported on the innovation project system in November 2014 of the year, but until the beginning of this year, all the details of the program were kept in the strictest confidence. At the Pentagon, high-tech weapons systems are called "third compensation strategies."

The first compensation was the creation of tactical nuclear weapons, the second - high-precision conventional weapons systems. The third compensation involves the development of weapons systems of the XXI century, based on robots and artificial intelligence.

In the Pentagon’s budget for 2017, a lot of money was invested in the third compensation strategy. 3 billion dollars allocated for the development of programs against the actions of a potential enemy; 3 billion - for weapons systems that connect people and machines (robots); 1,7 billion for the development of cyber- and electronic systems using artificial intelligence. Half a billion are designed to test new weapons.

Robert Wark showed at a press conference the slides of one of the newest weapons systems - the Perdix microdron, the dimensions of which do not exceed 30. See For such "babies", in his opinion, the future of military operations in the new century. The fact that such actions will be, the general from the administration of the president-laureate of the Nobel Peace Prize, obviously, no doubt.

To this we can add that, as Expert Online wrote to 5 in February, US Secretary of Defense Ashton Carter named Russia among the "five main security challenges of America", along with China, North Korea, Iran (by that time already freed from international sanctions) and IG (banned in Russia). Thus, there is no reason to doubt who the new weapon is directed against and who is entitled to the “third compensation”.

Russia, by the way, has the answer to this. “We have developed several types of radio-absorbing materials with high characteristics in the required ranges of the electromagnetic spectrum, Nikolai Fedonyuk, head of the laboratory of the Federal State Unitary Enterprise Krylov State Research Center, said on the eve of TASS. He also talked about the use of new composite materials in the designs of Russian corvettes of 20380 and 20385 projects, as well as frigates of the 22350 project, which should ensure their inconspicuity The rifled middle layer of the trim panel allows us to provide the necessary parameters for the effective scattering surface of the ship, ”the designer explained.

Ctrl Enter
Noticed oshЫbku Highlight text and press. Ctrl + Enter
We are
Heavy nuclear missile cruisers project 1144 "Orlan"Clash of the Titans. "Gerald Ford" against "Zamvolta"
172 comments
Information
Dear reader, to leave comments on the publication, you must to register.