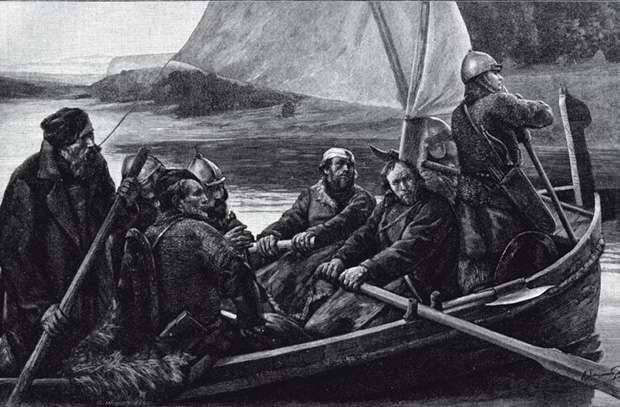 Who were the hlynovsky ushkuynik and how they founded Vyatka

By the 835 anniversary of the beginning of the Russian development of the Vyatka land in Kirov, a monument to Khlynovsky ushkuynik was established who founded the capital of this region. “Russian Planet” decided to tell who the ushkuyniki were, what role they played in stories and for which the Moscow princes ordered to make any mention of them out of the chronicles.

The first ushkuyniki appeared in the IX – XI centuries in the Novgorod Republic. So they began to call professional warriors who united in armed squads.

- Some researchers call ushkuynikov the first Russian special forces that served the Novgorod Republic, protecting it from external threats. Others - the Russian version of the Vikings, who adopted, as a result of close contacts, their style of behavior, in fact - pirates who were guided exclusively by their own interests and worked for profit. Still others see in the uskuynik of the discoverers and explorers of the new lands, the forerunners of Ermak with his Cossack detachments. The fourth are professional mercenaries financed by Novgorod merchants to collect tribute in the territories under their control and protect trade caravans, says historian Anatoly Lysenko to the RP correspondent. - In my opinion, the most reasonable point of view is that the ears were a passionate part of the inhabitants of Novgorod the Great, which, depending on the circumstances, could act in various roles.

Ushkuyniki got their nickname by the name of the ships on which they sailed - ushkuyev. These were light, maneuverable and high-speed vessels that could be controlled both by oars and by sails. Their name, according to one of the versions, comes from the Pomeranian word "Oshkuy" - the polar bear. On a high nose, Ushkuev adorned the head of this particular animal carved out of wood. Up to 30 man could fit in one rook. On these ships, ushkuyniki and made their rapid campaigns, many of which have changed the course of history.

- If you list the most impressive actions of the uskuks of the early period of their existence, they were the ones who forced the Kingdom of Sweden in 1323 to sign the Orekhovsky peace treaty with the Novgorod Republic. A century and a half earlier, in 1187, when united with the Karelians, the Sigtun, the ancient capital of Sweden, was so thoroughly plundered that the city could not fully recover from the destruction. So they avenged the Swedes, who first attacked Novgorod. Pay attention: some researchers believe that the squads of ushkuynik were very small. “But could they take cities if that were the case?” - continues the story of Anatoly Lysenko. “The ushkuyniki have dreamed for centuries in terrible dreams to all Scandinavian neighbors of Veliky Novgorod, on whose lands they raided with enviable consistency. By the way, it is believed that one of their leaders was Posadnik Vasily Buslaev, the main character of the Novgorod epic epic.

In 1348, the Swedish king Magnus decided to break the peace of Orekhov and again attacked the Novgorod Republic. He even managed to take the fortress Oreshek. And then, in response, the uskuyniki invaded the Swedish province of Halogaland and captured the well-fortified fortress Bjarkey. This struck the Swedish king so much that he immediately stopped the war, and in his will wrote: “I order my children, my brothers, and the whole land of Sweden: do not attack Russia if you cross the kisses; We have no luck in this ... "

By the middle of the XVI century, largely due to the efforts of ushkuynik, serious military actions in the north of Russia had virtually ceased. Attempts to organize a new crusade Livonian Order no longer made, as well as Sweden, Lithuania and Norway. And then the Novgorod soldiers left without business found a new enemy for themselves - the Golden Horde.

“In 1360, the ushkuynik along the Volga river reached in their boats to the Horde city of Zhukotin, which was located near modern Chistopol, and killed almost all of its inhabitants,” says Anatoly Lysenko. - This campaign of them led to the delight of St. Dionysius of Suzdal, but he, as one would expect, caused the heated resentment of the Golden Horde. Khizr Khan, who ruled at that time, demanded that the Grand Duke Dmitry of Suzdal be grabbed and extradited to him. And when on their way home they “drank up zipuns” in Kostroma, the Russian princes seized the winners, tied them up and sent them to the Horde, where they were sold into slavery. Of course, such an outcome did not suit their comrades who remained at large. They organized several new campaigns, forcing the Horde khans to regret their decision. And after 14 years, the usbukis captured the very capital of the Golden Horde, the city of Saray. And in the same year they founded the city of Khlynov, which later became Vyatka, and then - Kirov. 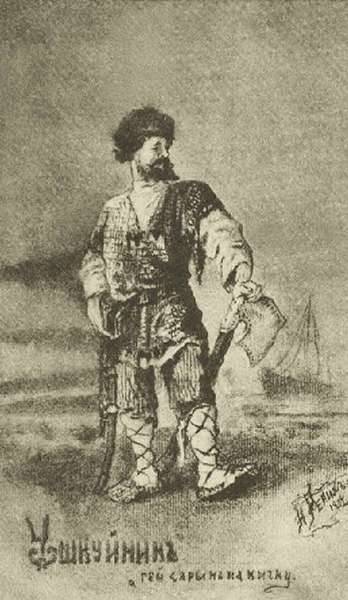 Historian Nikolai Kostomarov wrote: “There is nothing in Russian history darker than the fate of Vyatka and its land. The beginning of this colony the Vyatka Land chronicler refers to the 1174 year and contradicts itself somewhat: in one place it says that the inhabitants of Novgorod set off on their own will and separated from Veliky Novgorod, and in another - that they set off with the consent of Veliky Novgorod. Most likely the first, because this colony did not recognize the authorities of Novgorod, was hostile to Novgorod several times, never interacted with it and felt against itself — according to the same local chronicle — the anger of its metropolis. ”

- If you do not forget that Khlynov was founded by ushkuynik, then there is no mystery in this. Novgorod, who used their services for many centuries, of course, could not like that they decided to separate and live independently, - historian Viktor Khokhrin tells the RP. - Especially since the free Khlynov grew very quickly. Ushkuyniki arranged everything to his liking in it: many researchers call the state they created as the Vyatka Veche Republic. In fact, the orders in Khlynov were the same as in Veliky Novgorod. It had its own Chamber, but there were no posadnik and princes. In order to preserve independence, the small state periodically united with one or the other princes, but did not submit to them, which categorically did not suit either Novgorod the Great or Moscow.

Having received their own state, they did not abandon their previous habits, did not settle down on the spot and continued to go hiking. So, in 1471, they made another raid on the capital of the Golden Horde - the city of Sarai - led by voivode Kostya Yuriev. This is even stated in the Typographical Chronicle. After the plundering of the capital, the economic power of the Sarai horde was finally undermined, and the Moscow princes finally stopped paying tribute to the khans.

Ancestors of the Don Cossacks

The Moscow princes put an end to the existence of the Vyatka Veche Republic. In 1489, the Grand Duke Ivan III, who had earlier dealt with Veliky Novgorod, sent an 64-thousandth army led by the boyars Daniel Shchenya and Grigory Morozov to capture Vyatka. They besieged the city. Vyatichi tried to bribe the governor, but all they managed to achieve with generous gifts was to tighten the surrender. True, this also turned out to be not useless - part of the inhabitants during this time managed to escape. But the rest waited no less severe punishment than before the inhabitants of Novgorod. Some were executed, the rest were settled in other cities of the Moscow principality. Even the name of the city Khlynov disappeared from all documents for several decades.

Part of the survivors of the defeat of ushkuynikov went to live on the Don and the Volga. Soon there formed the Volga Cossacks, whose customs strikingly reminded ushkuynik customs, and the desire for free life and river trips was no less than theirs. And linguists see similar features in the dialect of Novgorod, Vyatichi and Don Cossacks. By the way, the very word "Cossack" was first mentioned in chronicles in the fatal 1489 year for Khlynov.

“The historian Vadim Teplitsyn cites another weighty argument — the leaders of ushkuyns were called vatamans,” says Anatoly Lysenko. - This word reminded him of the English word waterman, which can be translated as "rower", "a man living by the water." It is difficult to say how justified is the parallel with the English word, but it is difficult to refute the similarity with the Cossack "chieftain".

In the annals there are quite a few references to ushkuynik - the winners, the princes of Moscow, ordered all records of them to be obliterated by their chronicles. Therefore, much more information about these warriors can be found in the epos “About the Kulikovo Field” and “Standing on the River Ugra”.

Ctrl Enter
Noticed oshЫbku Highlight text and press. Ctrl + Enter
We are
By the 435 anniversary of the beginning (1581) of the Siberian campaign of ErmakVikings - truth and fiction
36 comments
Information
Dear reader, to leave comments on the publication, you must to register.