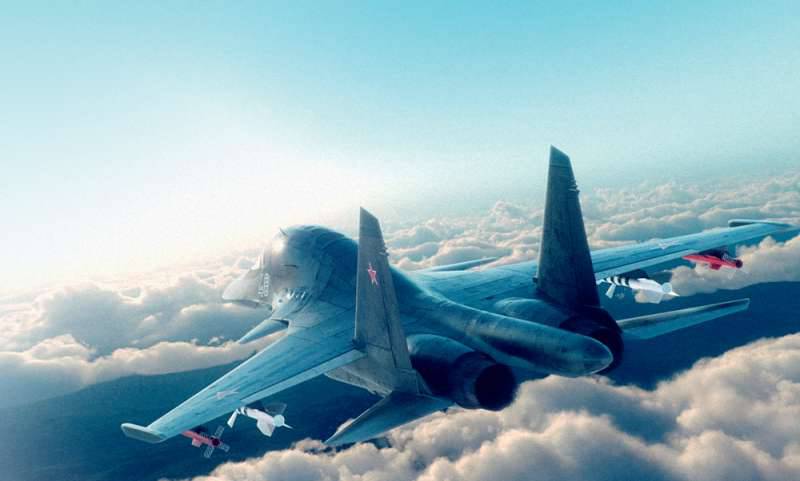 Our new strike aircraft is designed to hit point-strong targets day and night, as well as around-the-clock search, detection, classification and destruction of surface and underwater targets in any weather conditions in the presence of active electronic countermeasures. Su-34 is called the immediate successor to Su-24, but the similarity of the indices and, in part, the assignment should not be misleading - there is no structural continuity between these combat vehicles. Su-24 was developed in 1960-ies as the Soviet response to the revolutionary F-111 family, created within the walls of the American corporation General Dynamics. The F-111 Aardvark in various modifications performed a whole range of tasks: from a tactical bomber to a reconnaissance aircraft and a strategic bomber (FB-111FA) and embodied several revolutionary technologies, such as: the use of afterburner dual-circuit turbojet, terrain tracking radar and variable wing geometry. The F-111 turned out to be such a good machine that the Soviet aircraft designers decided, if not to repeat it, then, in any case, to build an aircraft with similar capabilities based on similar design solutions. So there was a Su-24 - tactical front-line bomber. 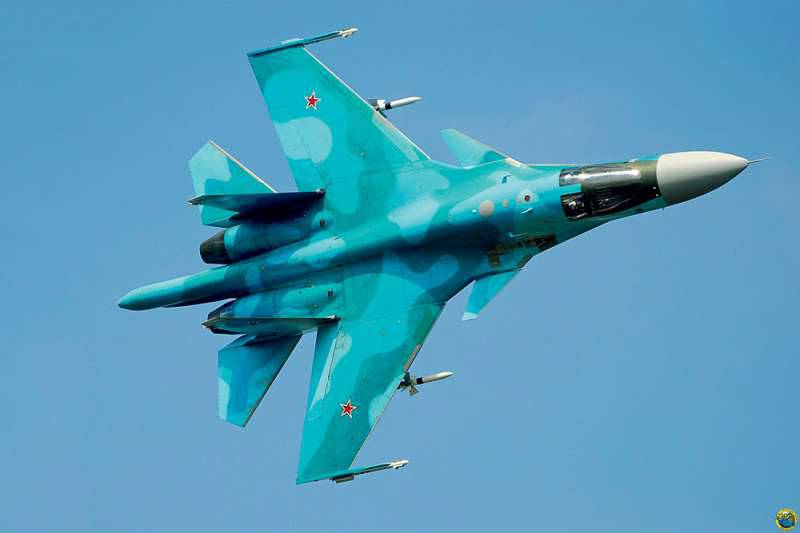 Some statistics
The X-NUMX Su-83 (34 serial and 75 experimental pre-production samples) are in service with the VKS of Russia. One plane lost. 8 June 4 of the year when landing at the airfield in the Voronezh region at the Su-2015 did not open the braking parachute. The plane rolled out of the band and turned over.
Other pedigree

They also write about the Su-34 as a front-line bomber, and in this role it may well be used, but it is worth remembering that its prototype at the design stage was called the Su-27IB. IB means "fighter-bomber". Thus, our strike flagship is the constructive development of the Su-27 fighter, which was created in 1970 in response to the emergence of the American McDonnel Douglas F-15 Eagle. By the way, based on the F-15, they built a fighter-bomber, or, as they call it in the USA, the multi-purpose strike aircraft F-15E Strike Eagle (“Shock Eagle”), which, obviously, should be considered the closest American analogue of our Su-34.
Strike Eagle went to the first flight in the 1986 year, and in 1988-m was already adopted. The first flight of the Su-34 early prototype - “T-10В products” (aka Su-27IB) took place on 13 on April 1990 of the year. It would seem that the difference in time between the first flights of competitors was not so great, however, the Su-34 adopted the Russian army not two, but 24 years later, after it first “took the wing”. To explain the reasons for which our defense industry made such a pause seems superfluous. 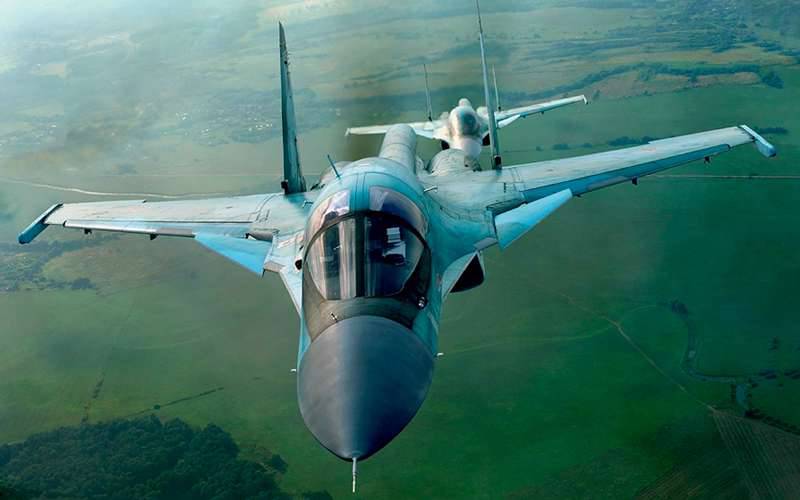 Armored house
Protected with titanium armor, the spacious Su-34 cabin is perhaps one of the most interesting features of a strike aircraft. In the cabin you can sit, lie down and stand. There is a toilet and a mini-kitchen with a microwave. This is unprecedented comfort for aircraft of this class.
Nevertheless, the work has been done, and this can only be rejoiced. The “Aardvark” F-111, which once inspired the creators of the Su-24, has long been in museums, and our heroic “bomber” is still flying, although it has long been outdated. The factors of moral aging of the Su-24 include primarily its narrow specialization: now in the world military aviation There is a tendency to create more universal platforms. Our old bomber is too slow and low maneuverable to have any chances in an air battle against a modern fighter. After the Su-24 was shot down by an F-16 fighter of the Turkish Air Force, the Russian command decided to conduct all attack work only under the guise of Su-30SM fighters. The Su-24 is to launch rocket-bombing strikes against ground or surface targets, and to ensure the relative accuracy of strikes the aircraft has to (from outdated aiming systems) work from heights that are reachable for light anti-aircraft systems like MANPADS, and they are much larger likelihood may be in the hands of the same Islamic militant groups in Syria. 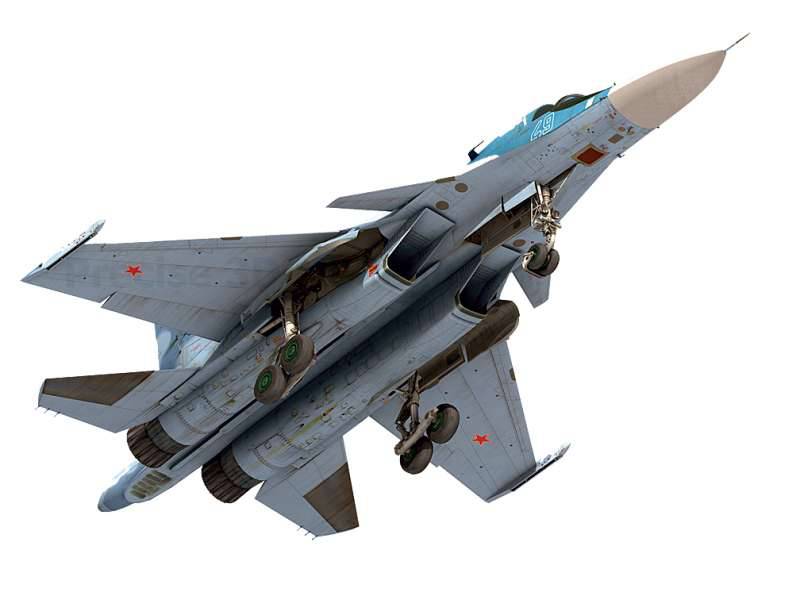 More wheels!
Due to the increased weight of the head part of the fuselage (compared to the Su-27), the front landing gear was completely redesigned. She moved forward and changed the scheme of its cleaning, providing also a pair of wheels instead of one.

Su-34, having one of the best domestic fighters as its basis, undoubtedly wins from Su-24 in maneuverability and is able to conduct accurate fire on ground targets, remaining at a safer height. The new aircraft also has more combat load (according to unofficial data, up to 12 000 kg against 7500), combat radius (1100 km against 560) and maximum speed (at high altitude 1900 km / h against 1600). At the same time, the Su-34 is quite far from the Su-27, which is noticeable even to an unsophisticated look. Su-34 - “triplane”, that is, in addition to the wing and stabilizers, it is equipped with two additional tail units located in front of the wing. This design improves aircraft maneuverability at low speeds. But it was decided to abandon the ventral carinae, characteristic of the Su-27.

Another striking feature is that flattened nose (radome radome). This design feature is related to the fact that in comparison with SU-27, the Su-34 has an expanded cockpit. As in the Su-24, the crew of the aircraft consists of two people, which are located on the seats in one row. This arrangement takes a direct start from the development of the T-10KM-2 deck training aircraft (also based on the Su-27). By the way, there are also two pilots in the F-15E, but they are sitting behind each other.

Between the seats there is a passage in which one of the crew members can lie down and rest. It is assumed that the plane will make long-distance voyages with in-flight refueling - a retractable rod is provided for this, so a short rest may turn out to be useful. In the back of the cabin there is a toilet and a mini-kitchen for heating food. Here you can even get up to full height.

Entry into the cabin is not carried out in the traditional way - through a lantern, but up the ladder through a hatch in the niche of the front landing gear. By the way, due to a change in the design of the cabin, the front desk has been redone and reinforced. Unlike the Su-27, there is not one wheel on it, but two wheels located next to each other. For the first time to protect the crew cabin was made in the form of a titanium armored capsule. The cabin is sealed and “inflated” - to the height of 10 000 and the crew will not need high-rise suits.

Compared with the Su-27, many other significant improvements have been made to the design. Strengthened wing, added two additional suspension points for weapons (12 vs. 10). In general, the Su-34 is much heavier than its base model - its maximum take-off weight is increased about one and a half times (up to 45 000 kg), which makes it possible to carry more fuel (up to 12 000 kg) and more weapons.

For greater security of the aircraft in addition to the main radar (В004 with a passive HEADLIGHT) located under the duck nose, an additional radar is installed in the extended aft beam, facing the rear hemisphere. When enemy targets are detected in the air, the Su-34 can attack them with the help of the standard X-NUMX-mm HS-27-30 cannon standard for the Su-30 family, as well as with the use of small-capacity air-to-air missiles (P-1) and average (P-73) range. The nomenclature of air-to-surface weapons is quite numerous and includes both adjustable bombs such as KAB-77, KAB-500, and unmanaged (C-1500, C-25, C-13) and guided (X-8, C -25L, X-25, X-29, X-31, X-35 (V), X-58 (M)) missiles. 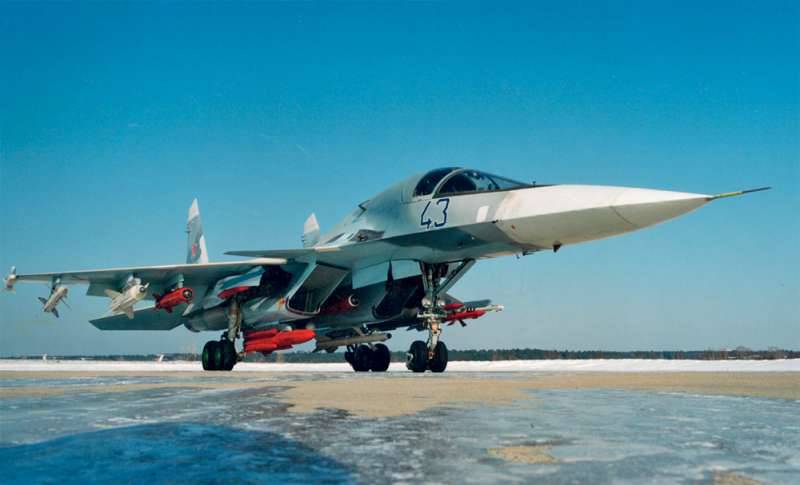 Battle check
Su-34 is able to perform combat missions at any time of the day, in any weather and climatic conditions. Currently, 12 machines operate as part of a Russian air group in Syria.

However, the effectiveness of strikes depends today not only on the quality and range of ammunition, but also on aiming systems and, in general, on the “advancement” of on-board electronic equipment. In addition to radar with a range of sight on ground targets 120 km and with the possibility of simultaneous firing at four targets, the avionics include the Khibiny-10В electronic warfare system (radio reconnaissance, active jamming), as well as thermal imaging and television aiming systems.

It should be noted that electronics, unlike a airframe or engines, is in some sense the Achilles' heel of our aviation, and the defense industry as a whole. It is known, for example, that on export versions of Russian combat aircraft sold to countries such as India or Malaysia, avionics of foreign structures are installed. Despite the fact that the Su-34 was officially adopted only in 2014 year, the first batches of a promising strike aircraft began to arrive in the troops already in the zero years of this century. In the first years of operation of the Su-34, various “childhood diseases” of the machine came to light, and they concerned, in particular, the unstable operation of the radar and the sighting system, which became a serious obstacle to delivering high-precision strikes.

At the beginning of this decade, following the results of the first years of use, including (unofficially) during the Russian-Georgian conflict 2008, the aircraft underwent modernization, receiving, in particular, new high-temperature engines AL-31-M1, an updated radiation warning station and a gas turbine auxiliary power unit. It is also reported that as part of the upgrade, navigation and aiming systems were updated, and their capabilities are now being tested in the course of air strikes against targets in Syria. At the same time, it is known that Sukhoi Design Bureau is developing a new, modernized version of the strike aircraft, Su-34M, which, in particular, provides for the installation of more advanced avionics systems. The new modification should be ready for 2016 − 2017 years, and the same Novosibirsk Aviation Plant, which builds the basic version, will start its production. Subsequently, the entire cash park Su-34 will be upgraded to the level of the Su-34.

Be that as it may, until the T-50 (Su-50) is put into mass production, the Su-34 remains the most advanced combat aircraft in service with the Russian HQs. Possessing a number of serious advantages over similar aircraft of the previous generation and in many ways not yielding to foreign competitors (and surpassing them in some way), the Su-34 will undoubtedly play a significant role in strengthening the country's defense capability. And the elimination of deficiencies and design flaws is a question of the growth of the technological competence of our defense industry.

Ctrl Enter
Noticed oshЫbku Highlight text and press. Ctrl + Enter
We are
Multi-Purpose Fighter-Bomber F-111A AardvarkAn-12 in Afghanistan
47 comments
Information
Dear reader, to leave comments on the publication, you must to register.