Su-35: five facts about the fighter 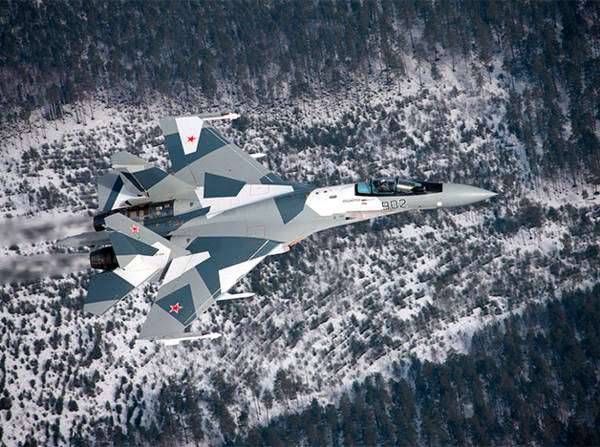 On February 19, 2008, the Su-35 multi-functional fighter first flew into the air. Today, "thirty-fifth" becomes the face of battle aviation Russia: Until 2020, about 100 vehicles will be delivered to the Russian Aerospace Forces. Recall five interesting facts about the Su-35 - the most powerful fourth-generation fighter in the world.

The first under this code at the beginning of 1990-s at international exhibitions demonstrated the so-called Su-27М - the modernization of the base Su-27. It was actually the first attempt to make a multi-purpose fighter out of the interceptor. For several reasons, the plane did not go, and returned to the index «35» only in 2005 year.

Already 19 February 2008 of the year from Ramenskoye airfield LII them. Gromov took to the air a new "thirty-fifth". The plane was piloted by honored test pilot of Russia Sergey Bogdan. 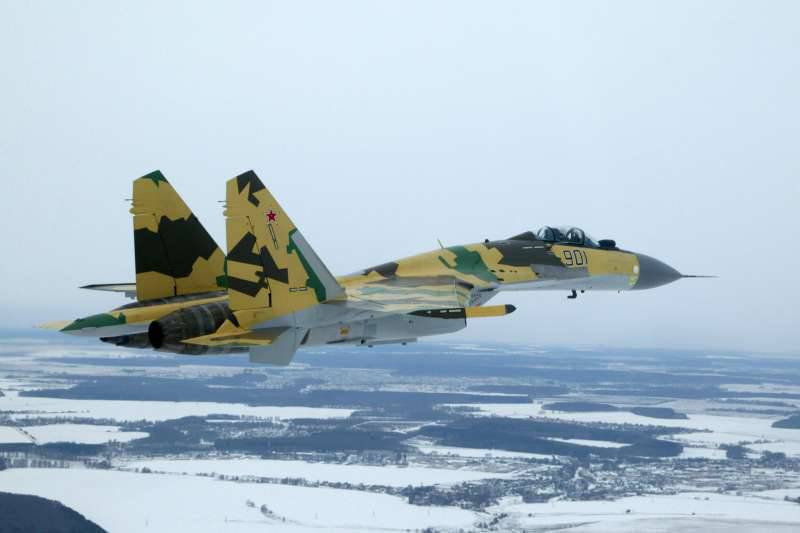 At first, the fighter was designated as Su-35BM (major upgrade), then it was simply called Su-35 with an export target. After the appearance of interest from the Russian Air Force, the Su-35С variant appeared, with the traditional letter “C” denoting the variants of equipment for the supplies of the Russian Defense Ministry.

2. How "thirty-fifth" compared with UFO

Abroad, the Su-35 (by NATO code designation: Flanker-E +) was first presented at the 2013 year at the international air show in Le Bourget. The demonstration flights of the Russian fighter have become the highlight of the program at the air show.

Piloted the plane again Sergei Bogdan. When he made the so-called "pancakes" in the sky, Le Bourget literally froze. This aerobatic maneuver - turning in the horizontal plane by 360 degrees in flight without losing speed and height - cannot be performed by any other fighter. 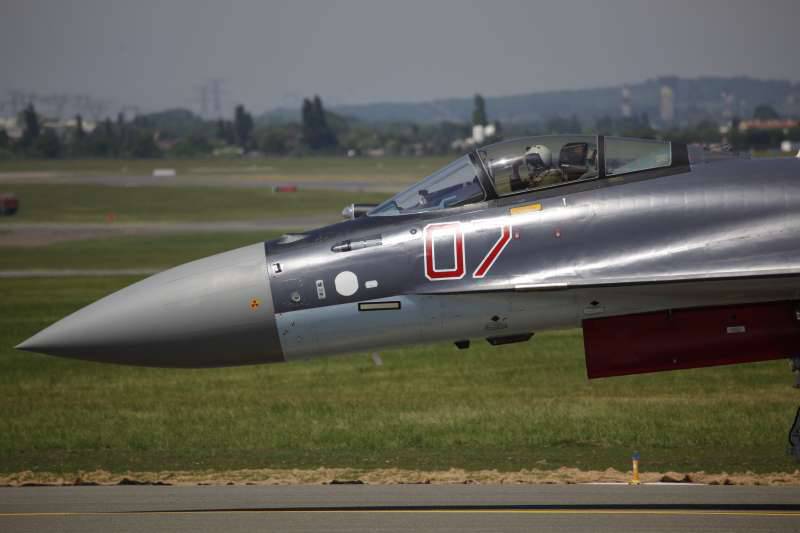 “Our airplanes flew over the airfield like this — no other aircraft in the world does this. And the integrated control system on these planes is the Kratovo, the engine management system is also ours, ”the CRET general director Nikolay Kolesov commented later on the flight of our“ thirty fifths ”.

And foreign experts for this "unearthly" show Su-35 immediately compared with the UFO. “I’ve seen 22 for years in this industry, but this flight is something incredible,” said French engineer Christian Kunovski. - This is not a fighter, it's just a UFO! Frankly, for the first time in my life I cried with delight! ”

Despite the absence of AFAR, the thirty-five radar system can detect targets at a distance of up to 400 km, and also accompany airborne targets to 30 and conduct simultaneous shelling of eight of them.

Such capabilities provide the fighter radar control system (radar) with a passive phased antenna array "Irbis". The system was developed at the Institute of Instrument Engineering them. Tikhomirov, and its production is engaged in Ryazan State Instrument Plant, a member of KRET. 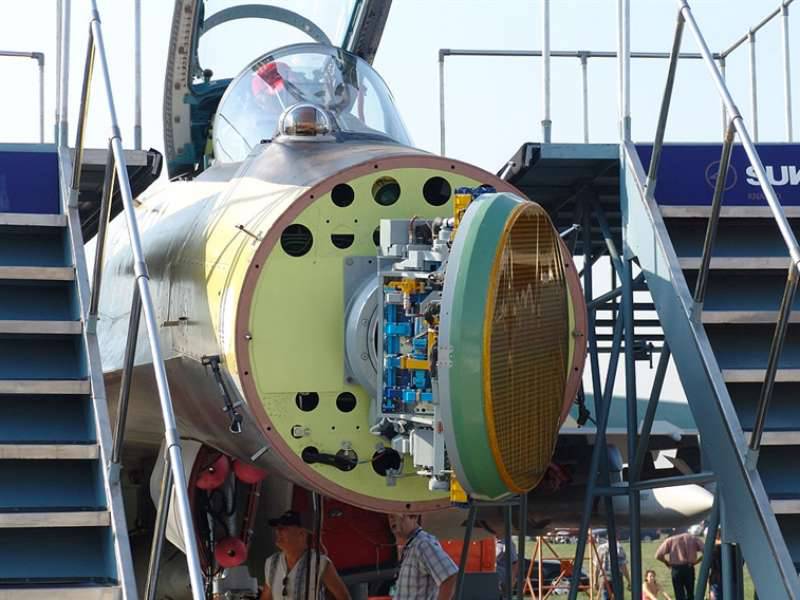 In terms of its performance, the Su-35 fighter radar system is at the level of the most advanced foreign developments in this field, surpassing most of the American and European radars with passive and active phased arrays.

4. In the cockpit of the Su-35 there are no analog devices with arrows

The cockpit on the Su-35 resembles the fifth-generation fighter cockpit. Unlike the Su-27, it does not have analog devices with familiar arrows. Instead, they have two large color LCD screens on which in the picture-in-picture mode all the necessary information is displayed to the pilot. In the "glass cabin" Su-35 also installed a collimator indicator on the windshield. Thus, the pilot sees the corresponding symbols and signs against the sky, they seem to hover in the air in front of the plane. 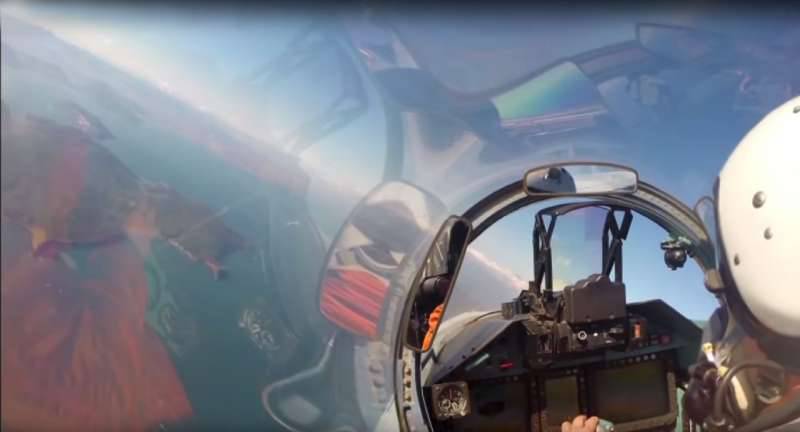 Hydrodynamic actuator control power plant replaced by electric. This not only saves space and weight, but also allows parallel control to be introduced into machine control. In practice, this means that the role of the pilot becomes less noticeable: the computer decides how fast the car will hit the target and at what point allow the pilot to use weapon.

In this case, the machine takes on some of the difficult flight regimes, for example, flying at extremely low altitudes with a rounding of the terrain.

One of the main advantages of the Su-35 is that it can carry a huge load in the form of air-to-air missiles - a whole ton of such missiles.

All in all, Su-35 on 12 suspension units can lift 8000 kg of high-precision missiles and bombs. The “thirty-fifth” armament includes a whole set of air-to-surface guided missiles, including new items such as five X-58USHE extended-range anti-radar missiles, three long-range Caliber A missiles and one large anti-ship missile. range type "Yakhont". 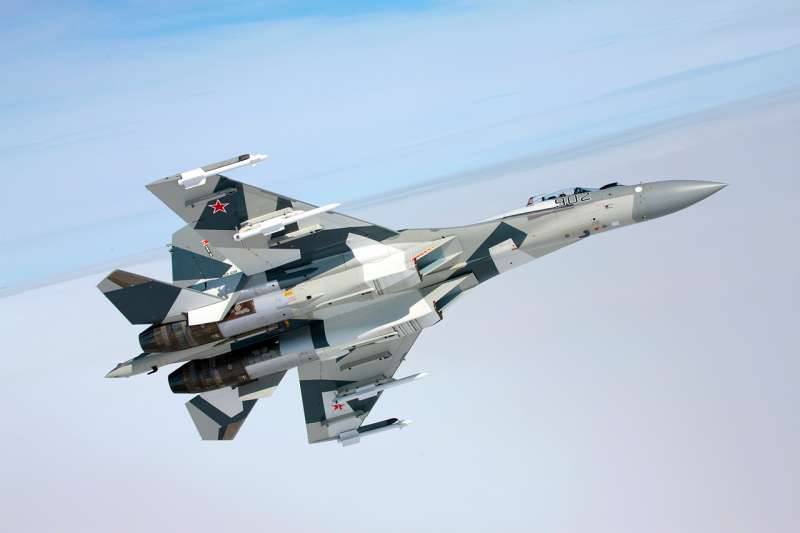 The Su-35 fighter also raises 11 adjustable bombs with television, satellite or laser guidance systems. In the future, it will be able to use advanced and new models of 500 and 250 kg aerial bombs and 80, 122 and 266 / 420 mm missiles, including laser-corrected ones.

At the same time, Su-35 is able to use its weapon at supersonic speeds with a Mach number equal to about 1,5 and at an altitude of more than 13700 meters. For example, the American F-35 fighter operates at an altitude in the 9100 area of ​​meters and at a speed of Mach number around 0,9.

Ctrl Enter
Noticed oshЫbku Highlight text and press. Ctrl + Enter
We are
An-12 in AfghanistanMiG-23 fighters in Afghanistan
135 comments
Information
Dear reader, to leave comments on the publication, you must to register.